One of my longest remaining active kitchen knife is my Sir Lawrence butcher knife–once my main knife.

Now, I don’t do butchering any more. How can I repurpose?

I’ve chosen to bring in a cultural fusion candidate, the Kai Seki Margoroku Kinju 180 mm deba as an update, with my Sir Lawrence as a backup. 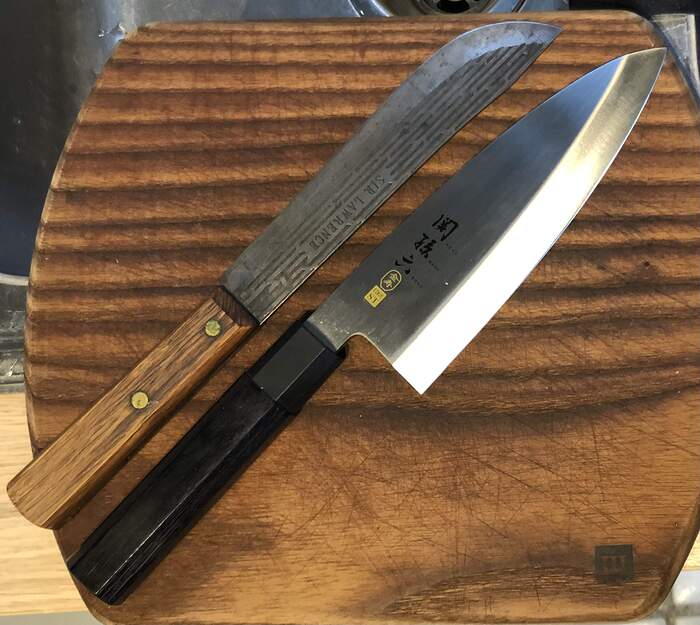 I’ve been trying out my Kinju deba on many tasks, and it seems to be an overall better fit, though I haven’t completely abandoned my Sir Lawrence.,

Are there any knives you have that you have already repurposed–or considered updating?

Not sure what you mean by re-purposing. My knives are Henckels 4 star, and I have had them for almost four decades (still as good as day one).

Got a veg/fruit garden? Maybe use it for that (although I prefer scissors or clippers).

My Sir Lawrence butcher knife is being used these days almost every morning to split my English muffins, and occasionally to “behead” a soft boiled egg.

I’ve been using my current Sir Lawrence for as long as you’ve used your Henkels4star, and the famous American Hickory profile in other knives I’ve had dating back to my childhood.

You can still buy the original American Hickory for less than $10. I saw the “fancy” Sir Lawrence available new on EBAY for about $20.

I prefer a fork for this as it better preserves the nooks and crannies.

It’s interesting how we each choose “big” knives vs smaller choppers vs scissors et al. Use what work for you. No one is watching.

When I do the Thomas kind, I use my Tojiro “ultimate utility” (sandwich) knife.

Any repurposing over the last decades?

Have you upgraded over the past 10 years or so? or just repurposed?

Any repurposing over the last decades?

Not really. I have a cleaver, 8" and 10" chef, 10" slicing, 3" and 4" pairing, 6" boning and utility, and a 9" serrated (used mostly for bread)… and while I could ditch one of the pairing knives, along with the 10" knives along with the utility and not really miss them, they all still sit in my block.

I more or less parallel @ScottinPollock. We have a decent quality knife for each purpose, keep them in good shape, don’t go for glamor knives. We do have and insist on a good serrated bread knife. We recently went through the “knife drawer” and sent some really cool carbon steel knives on to new homes. You can only use one knife at a time.

Here in SOCAL, the cooking world has changed radically in that time. I cook different things, now, and that requires new preps.

In particular, we are blessed with–and I am surrounded by–Asian influences from restaurant to grocery store. Asian–Chinese and Japanese tools (including kitchen knives)–to improve the prep work.

That’s one reason I’m trying out the Kinju deba.

Yup. While my Henckels are an 18° angled edge (as opposed to 13-15° Japanese knives), I really don’t notice anything wrong with them as I have whetstones to keep them sharp (plus I have read about too many issues with 13° knives). If they glide through a ripe tomato (or a piece of paper), why change?

About 6 years ago, I purchased the knife that I thought was the perfect update from my American butcher knife, a Wusthof Classic Ikon 8" Chef’s knife. Unlike your Henckels, it arrived sharpened to 15 degrees per side. Compared to earlier versions, it was considerably lighter, and it was tapered so that one really didn’t need any other knives–except a paring knife.

I found the perfect paring knife to complement my Classic Ikon: a Wusthof “precision,” (later called the “xline”), and it remains the knife that I use every day:

Your most used knives in your arsenal? - Cookware - Knives

Read the Your most used knives in your arsenal? discussion from the Chowhound Cookware, Knives food community. Join the discussion today.

I sharpened initially with a combination of honing and the Wusthof “pull through” that was set at 15 degrees, but soon substituted a finer grained stropping stage that both refines and polishes my knives.

It was a change of emphasis in prep work towards vegetables, and the rediscovery of my Kai Shun SM Nakiri that led me toward the concept of cultural fusion that is guiding my thinking these days.

I have, and still use, after more than 30 years, several knives that were extremely inexpensive when I purchased them.

My point is that I’ve been continuously repurposing them over those decades as my cooking experience has changed–adding new ones as my hobby has unfolded.

In SOCAL, I’ve been living in the middle of a changing food culture.

Cooking has of course developed in 50 years, but I’ve not noticed the need for different prep methods. Our cooking is mostly European to Mid-Easst/Med. We live too near excellent Asian to cook it at home.

So you buy the same groceries as decades ago? My meats used to come with the expectation I would trim them–now the expectation is that I just toss them on the barbeque. My bread came in a whole loaf–now it’s pre sliced.

I still do a lot of butchering/breakdown of meat and fowl. A couple of professional boning knives are essential. We use our super bread knife for home baked boules. I never buy prepped salad. Born in CA, we’ve always used a ton of veggies. But I cook rice in a cocotte/small Dutch oven. This is the way I learned to cook…long ago. Still works.

n SOCAL, I’ve been living in the middle of a changing food culture.

It would be interesting for you to list the progression of food trends you’ve transitioned through.

Even though I was born in the USA, my first language was Swedish, and I grew up in a truly Swedish–not Swedish American–food culture. That’s where I used my butcher knife–and my hunting knife.

Even the Swedish American cuisine of the Smorgasbord and Pastry shop are gone. The special packets of yeast for bread making we used on a weekly basis are gone. We had special ovens for bread–and special containers. We didn’t repurpose ECI pots for bread, and Asians don’t repurpose ECI for rice, either. What you consider to be “european” is already Americanized–just as the emerging new Asian cuisine is becoming Americanized.

I can’t justify a bread knife any more, but very recently discovered that my 9" Ken Onion slicer did a spectacular job on a beautiful artisan loaf I purchased that cost a fortune. In addition to my butcher knife–that I rarely use–I have a Chicago cutlery fillet knife that used to be perfect for the fresh water pan fish I used to collect. I repurpose it for poultry some times–teaming it with several other utility knives I have.

The restaurant, grocery store, cuisine world around me in S. Pasadena has gone from Spanish to almost completely Asian.

Contrary to the protein knives you use, here are my most recent protein tool kit: 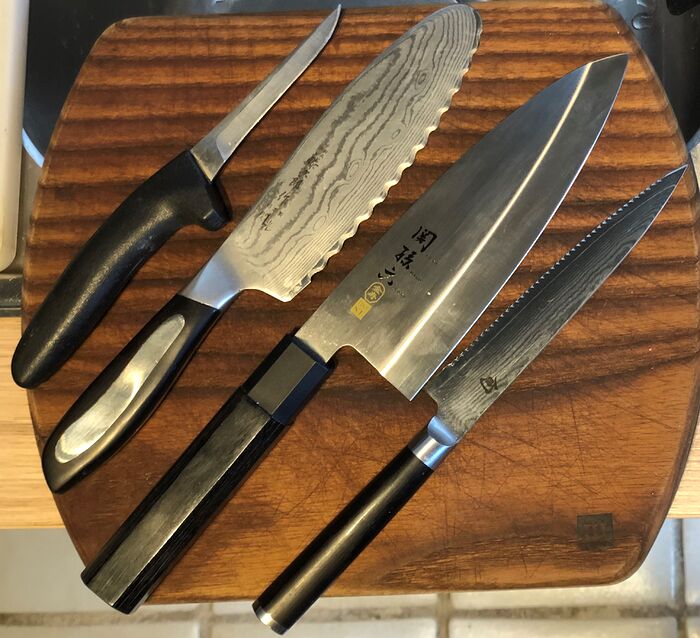 For me, the main features of a knife is how it fits and performs. My knives have three distinct properties I love that I have not seen cumulatively on any other knife. The first is the thick, heavy full length bolster… followed by the pronounced drop down heel. The combination of the two put my pinky, thumb and forefinger in the exact right spot every time (from 3" to 10"). It’s like they were molded to my hand.

The third is the no-rivet synthetic handles that let me keep them submerged for extended periods without worry of damage.

Compared to what I have used for decades, IMHO your knives look clumsy, with literally no bolster, and straight, flat (and very non-ergonomic) handles.

Not really looking to poop on your parade, but to suggest that knives that handle exactly as we like, and perform well should be periodically upgraded due to changes of what we prep with them seems a little short-sighted IMHO.

What is important is that you have assembled and keep assembling tools that work for you. As it should be. I’m still interested in the SoCal trends you have surfed. Me, i cook mostly out of classic French and Italian cookbooks as well as French language food magazines and cheffy books.