to me, it’s not about knives at all. It’s about adapting and upgrading to changing times. Where I live, my prepping needs have changed drastically.

I think it’s really the same all over the world. My former student and colleague, Dr. H has had to not only face the changes that have happened to his prep work when he was in Japan, to becoming a Japanese-American.

The one knife that works for him is a santoku–but it has to be very special. I bought him a Shun dual core santoku which he loves because it fuses his Westernizing culture at home with his fusion culture here in SOCAL.

Choosing a knife is always a very personal decision, but when the tasks it performs are no longer needed, one needs to move on.

That’s what’s happened to my American butcher knife. I still love it, but it’s gone from being a star to being a “beater.”

but when the tasks it performs are no longer needed, one needs to move on

I am not sure what tasks your current knives are incapable of (perhaps you can list them), but my decades old knives are more than capable of everything I need.

I have a dear friend who loved that cuisine so much that he took a last trip by himself to Paris for two weeks to have one last series of feasts before he passed away.

The knives are not the issue, SP,

I’ve already given examples of repurposing in my OP.

I’ve been trying out my Kinju Deba to cut up a slab of processed turkey for a sandwich, and reached near the end of the slab. It couldn’t do the job, so I grabbed my special knife for Thanksgiving turkey, my Ken Onion 9", and it sliced up that remaining slab into just the right thickness for a delicious meat and swiss sandwich.

However, I still had to switch back to my “sandwich” knife to slice that sandwich in half.

Here’s an update I’m considering to supplement my left handed 6" Shun classic serrated utility knife–part of my protean team. It’s a terrific knife–and I’ve learned how to use it, but, as a single bevel design, it doesn’t always slice straight. 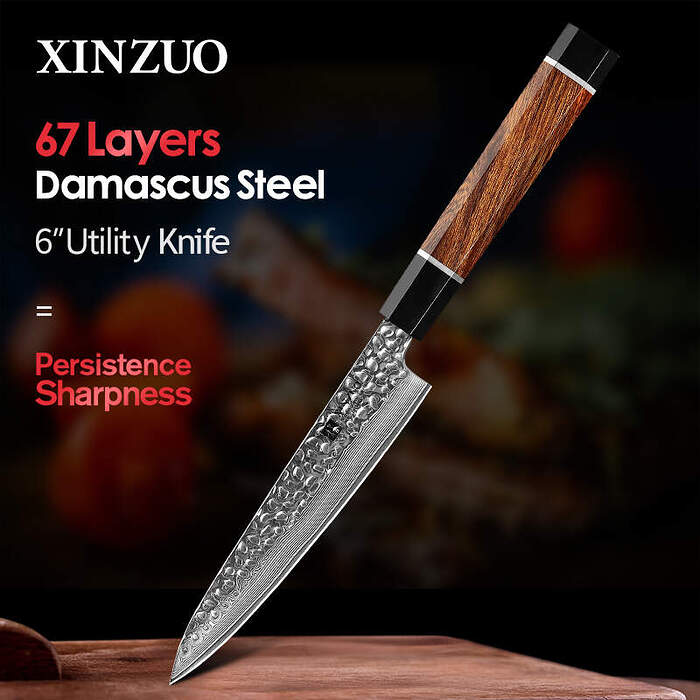 I’ve been repurposing my protein related knives, bit felt that the single bevel knives didn’t quite slice straight enough, so I’ve ordered a new double beveled 6" that I think may do the job: 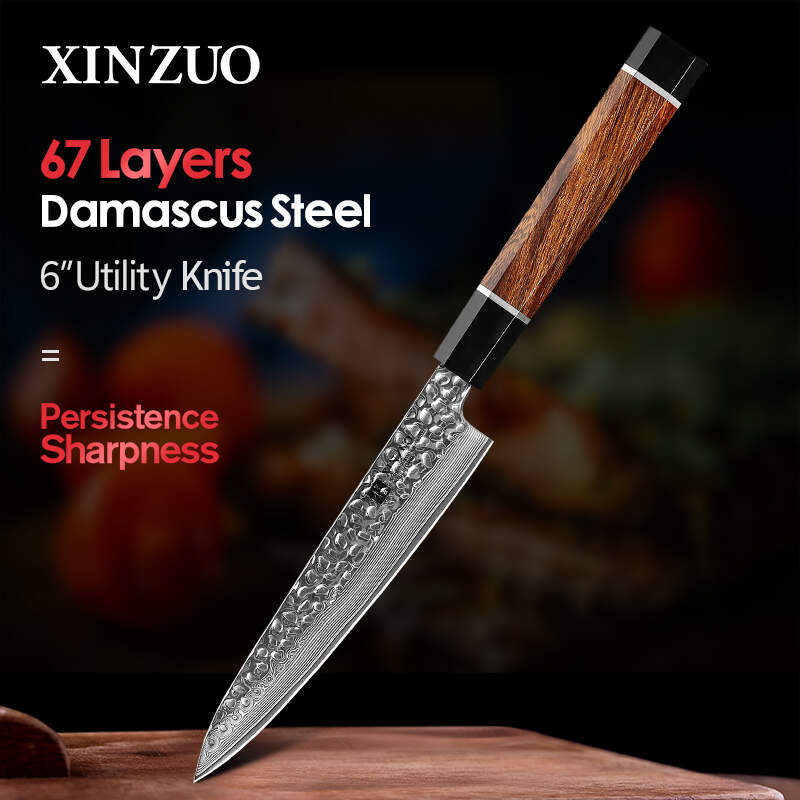 When I consider any new knife, I compare it with knives in my home kitchen testbed. Here’s an example: 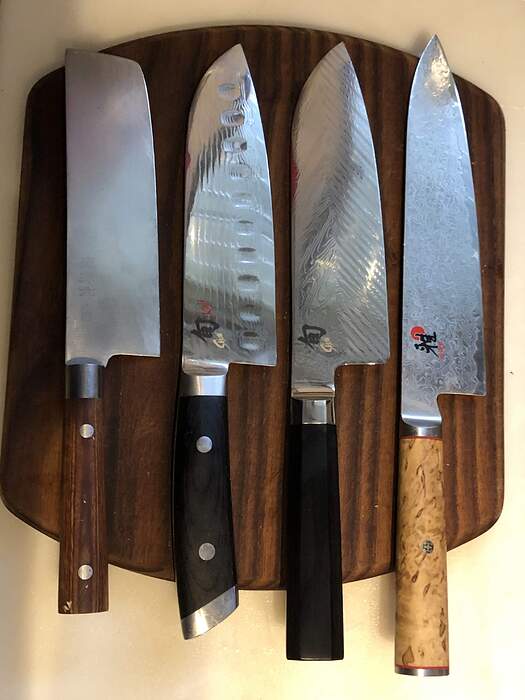 I compared the Shun dual core santoku of my friend, Dr. H, with three of my other knives: a Seki Magoroku Nakiri, a Shun Kaji santoku, and a Miyabi birchwood.

I’ll do another thread on my home kitchen testbed with more examples like the above.

Knives in this thread are really good candidates for both updating and repurposing:

I took some photos today of my Sabatiers, since I have recently treated or re-treated their handles. After taking these pics, I couldn’t resist the urge to post about them. These are all new old stock K Sabs from the 50s-70s as stated on their site and bought directly from K Sabatier. sabatier-shop.com for the interested. Each of the handles, except the 11 inch nogent which was great out of the box, I have sanded to a nice and smooth 1k grit. All have been treated with pure tung oil, no thinn…

They certainly don’t fit in very well in my multicultural SOCAL world . . .

Hah, yes I guess they are just too French for SOCAL

Our most famous French restaurant near Hollywood closed down after about 70 years. Will reopen on a reduced scale.

However, Americanized “European” cuisine at the highest level is available, and many of us still love “the French Chef,” and cook her recipes. After all, she spent her last years in Santa Barbara.

My life experience starts and ends with cultural fusion and the changes it brings about in my life. The things one eats at a restaurant or is served at a home, the raw materials and supplies one finds nearby, and the tools one acquires to create one’s own fusion in a home kitchen are all a part of that for me.

One additional element for me personally is an ongoing interest in the technology supporting or affording change–especially information technology–and the business model that underlies the process.

My collaborator on much of this, Dr. H, who participates in our comparison prepping, is from Japan, and another local collaborator, Dr. F, is from Hong Kong and translates/explains Chinese for me. I’m also in contact with Chef Panko in the Netherlands who has his own very interesting cultural fusion experiences.

Hey, that sounds great, Ray! It’s nice that you have this interest that you share with your collaborators. I haven’t been thinking about these things with much intensity, but perhaps there is fusion in my kitchen now as I have knives and pans from across the world from different cultures, even if the pans and knives themselves would not be so fusion for the most part.

So in my tools I have wanted some degree of originality. For my knives for example I have chosen the CCKs from HK/China, Sabatiers from France, Japanese knives from Japan and Finnish puukko + fish fillets made in Finland.

The knives from my childhood were almost entirely for meat, mostly wild game. By the time I was ready to start my hobby, I had been to Japan, Taiwan, and Thailand–it was a completely different world. I also had moved to SOCAL. The two “founding” knives I was using were my Sir Lawrence carbon steel butcher knife, and a Kai Seki Magoroku nakiri.

My cooking preps had already changed enough that I was ready to embrace the European heritage I grew into with a Chef’s knife. After consultations and cutting a few carrots, I chose the Wusthof classic ikon Chef’s knife and a paring knife. My Sir Lawrence was repurposed as a backup.

My collaborator, Dr. H, also wanted to develop his own version of cultural fusion, so I gifted him with an 8" Shun classic chef knife.

This began our mutual efforts at cultural fusion, focused on Asian culture: a mixture of repurposing and updating.

I purchased this knife, which is the closest I’ve ever had to a true Petty knife. I’m using it more than I expected. I still might have gotten the Shun, but the double beveled Shun is only available for right handed users.

My Sir Lawrence has been repurposed back to slicing English muffins nearly every morning. That’s one thing my petty can’t do well.

There really aren’t any new prep methods for knives. The only things new are some people’s awareness–not to be confused with knowledge.

but let me add a note about cognitive style.

My natural inclination is to be a “chopper”–and that’s a vertical “chop.” When I bought my Wusthof Chef knife, I learned about “rock chopping”, but it was not completely satisfying. My Japanese collaborator tamed me a bit, and I learned to push cut–especially with my Japanese nakiri–but it still didn’t feel right.

Then I discovered the Chinese vegetable cleaver, and everything came together for me. It could do everything–the weight of the knife doing much of the work–but for me the thrill was that I could finally chop the vertical way I always wanted.

My nakiri had become repurposed as a push cutter, and teamed quite naturally with a cleaver that supported my need to chop.