I’ve been stuck in SoCal for a few months courtesy Covid, and have various gardening projects that started in this period.

The biggest failure is what my hosts expected to be the slam dunk - two fancy raised bed containers against the east-facing wall of the house.

NOTHING has grown in these. I’ve had zucchini, lettuce, peppers, cucumbers, tomatoes, squash, arugula, mustard, phew. Everything either yellows and does, or gets eaten by mysterious pests.

Meanwhile, I HAVE managed to grow almost all these same plants in other locations - some in old, ignored raised beds, some in cheap 5 and 10 gallon nursery pots, some in fabric containers.

I sprayed neem oil, soap, and a premixed (organic) pesticide - I think the stuff eating the lettuce stubs stopped, but the yellow/brown squash and pea killer is undeterred.

Sigh. Neighbor thinks the soil is infected - maybe fungus or something else. He said to chuck it and start over, but it’s a LOT of soil - so both a pain and expensive.

Some pics of my poor snow pea seedlings. And the stupid lettuce-eating devils.

These containers face the neighbor’s un-tended slope, and I suspect there’s just too much pestilence there, because the worst I had to deal with in any other spot was slugs and snails.

Or maybe it’s the soil as the neighbor says. 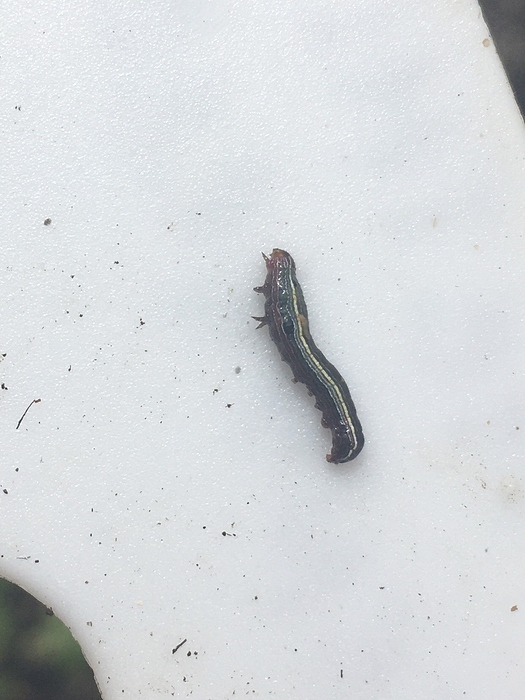 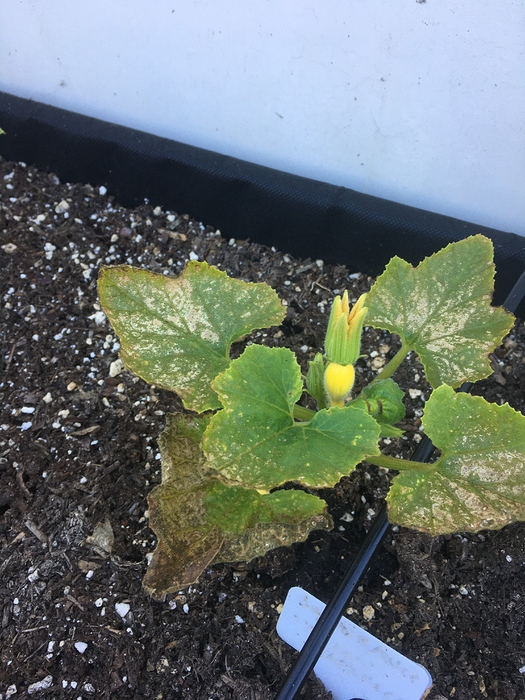 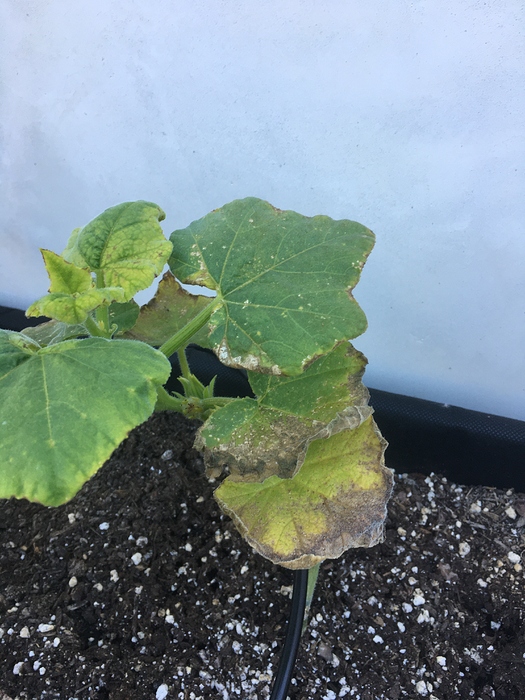 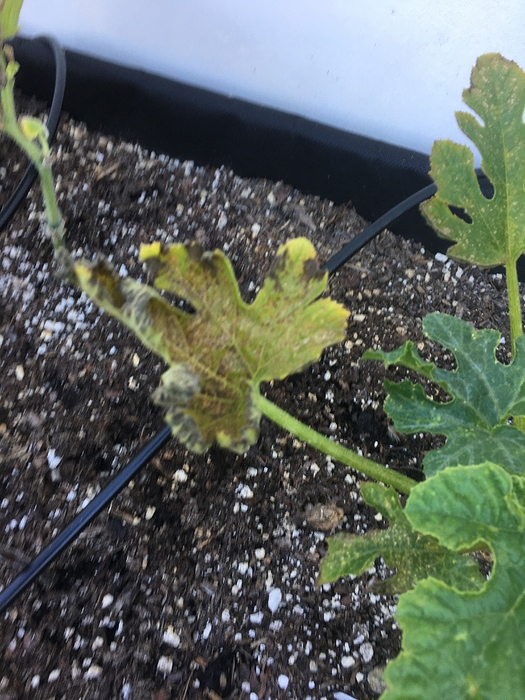 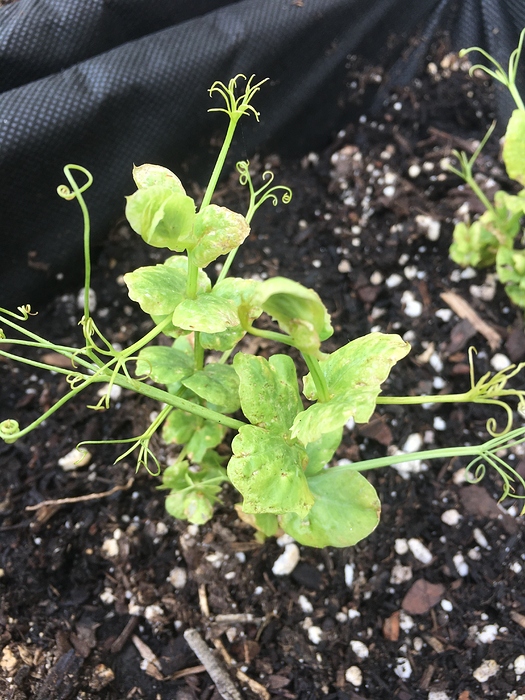 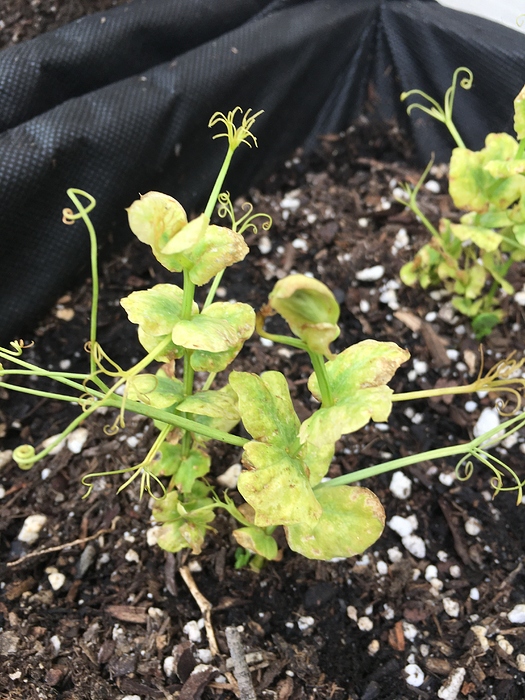 Have you eliminated the possibility that this is a water issue? Can certainly be a problem with beds next to a wall - and you’re growing stuff that is very thirsty.

But then you’re in a part of America that probably doesnt get too much rain, so a wall creating a “rain shadow” may not be the problem that I’d have in Northern Europe.

Maybe the neighbour is right about an infection in the soil. But it beats me what sort could infect a whole bed. Is this actual soil or bought in compost? If the latter, it may just be exhausted, so the plants are getting no nutrients to thrive. And dying plants are heaven for slugs.

Have you tested the soil for nutrients or tried a dose of all-purpose fertilizer? A lack of nitrogen is a common cause of yellowing.

Since you said the soil was expensive, do I assume correctly that it was bought, bagged soil? What sort, exactly? It looks like “potting mix” rather than “garden soil”, and while the former doesn’t have much long-term staying power, it should be good for at least one season, and should not be infected… Does the soil have fertilizer mixed in? Have you been fertilizing (additionally), and if so, with how much of what?

As far as diseases are concerned, it can be very hard to diagnose those without knowing what’s prevalent in the general area (and I have no idea about that in that part of the country). It could viral… in garden plants, that’s usually soil-borne, and I’d be a little surprised (but not shocked) if bagged soil - or at least the components - hadn’t been sterilized. If you bought seedlings rather than starting from seed, there’s always a chancethose are infected when you get them… If it is viral, there isn’t much you can do except ditch the soil and existing plants (far, far away), sterilize the containers and all your tools very thoroughly and start over, being careful to avoid contamination… (i.e., using precautions much like those you’d use to avoid spreading human/animal viruses - isolating new plants for a while, thorough and frequent hand-washing, sterilizing your tools (bleach solution works fine for that), etc…)

Yellowing, unfortunately, is a lot like human symptoms like fever, achey-ness, and listlessness - it can result from a whole host of unrelated causes, sometimes diametrically opposed. Could be a moisture problem, could be a nutrient problem - including an imbalance rather than a deficit or excess of them per se… And for that matter, neem oil and insecticidal soap, both of which are sold (and often touted) as all-purpose cure-alls, can both (chemically) burn susceptible plants…

These are raised beds with open bottoms, and filled with purchased raised bed mix?

Among other things might be thrips and spider mites; the bane of my existence here in Nor Cal, and tough to control according to the internet. Lots of weeds attracts them and keeps generations growing.

Insecticidal soap does more good then harm, and sprays with spinosad, although they might cause a little harm. I think neem oil is helpful, but hard for me to use because it is always so hot here. That first picture is an interesting pest indeed! Some kind of caterpillar that can eat tell tale holes and leave tell tale poop no doubt, but I’ve never seen one exactly like it.

Send a bit of soil to your local place (check with your local Master Gardeners) for testing, from what I’m told ( I’ve never done it), generally for nutrients in actual soil, but don’t give up on it!

But I would probably give up on peas for now, and maybe try them again in September.

Shouldn’t your beds be on the West side? I’m confused

I wonder if the hill/slope you mentioned happens to provide an inviting home to critters that are feasting on your plants. I’ve noticed in my yard that certain bugs do seem to like one area over the other. Likely it’s a combination on access to hiding places, shade, water, etc.

Maybe you can just mix in a few bags of new soil rather than tossing it all out.

, but I think  due East and due West should get about the same number of hours of sun at roughly the same angles over time (at least below very high latitudes). But because the sun has been up so much longer by the time “Western” exposure gets the direct sun, it’s usually hotter than East, so East is probably better for most crops than West, all else being equal…

That is very wet looking soil. Young plants don’t need lots of water. I may be wrong, hard to tell from pics, but do you have good drainage?

This morning I’m noticing the perlite, add what looks like weed block, perhaps lining the bed, which might rule out “purchased raised bed mix” (as noticed above, might be “potting soil”), and an opened bottom raised bed.

The guessing is sort of fun, but I hope @Saregama comes back with more clues!

It looks like you’re using potting soil in your beds. I’d work in some grass clippings, shredded leaves and any kind of organic material that will decay and enrich your soil.
Also, if you are new to organic gardening, or if chemicals were used in this area, the first year can be a disaster. There is a delicate predator-prey balance in nature and it will take awhile for this to return. For the moment I’d suggest just adding a good layer of mulch such as dry grass clippings, etc., to keep weeds away and help retain moisture in the soil. Be patient and in time your soil will improve. Also add flowers and shrubbery that encourage bees, butterflies and birds and they, in turn, will help your garden.
But I must warn you: gardening is addictive!

against the east-facing wall of the house.

Do the vegetables get enough direct sunlight all day long? I have vegetables looked like that at the end of the season, when they have produced the fruits, days become shorter and colder, the plants get tired and worn out. Do you have a lot of rain these days? What were the plants that used this bed? Maybe the PH of the soil is not correct for vegetables growing.

Thank you for all the replies, and sorry for the delay in answering

@Harters not a water issue, there’s an irrigation system in place - this was the “fancy” raised bed, so it was set up “correctly.” I say this because most of the other things I’m growing, I’ve macguyvered without any fancy stuff. The soil is purchased, expensive organic potting mix for vegetables with compost mixed in. No slugs in this bed, miraculously.

@biondanonima I have not tested it, but it was brand new from the garden store, and I have fertilized regularly with a liquid.

@MikeG Thanks. I didn’t use the neem oil until I saw stuff in the lettuce, and after using it the newly planted lettuce wasn’t eaten quite the same way, so it worked at least partially - that’s what led me to believe it might be pests from the neighbor’s slope facing these beds.

@shrinkrap Yes… No weeds in the bed but the whole slope facing it is filled with mostly weeds.

@bbqboy Not my house, not my choice. This location was selected because it is out-of-sight, behind the main house and yard area where socializing occurs. Tangentially because it faces east and gets morning sun and many hours of light.

@kobuta Yes exactly. This has been my suspicion all along. Theres a wild / unkempt slope coming down from the neighbors, and I’m certain at this point that whatever thrives there has made these beds their home.

@Heuchera Thank you. It is indeed addictive, I have more tomato plants (elsewhere) than I can manage, plus lettuce, kale, peppers, and some other experiments - it has been a fun ride, but became obsessive early on…

Thanks for your reply!

Here’s a thread from last year. My original post has lots of typos but the responses don’t.

There is at last a day with remps maxing out at 85, no rain in the forecast, but several days of what I expect is spider mite and/or thrip damage on my tomatoes. I think of a hard spray as the least harmful in terms of helpful bugs, and spinosad as the most harmful, but also fear losing plants quickly, after so long, and so close to getting some fruit. There are caterpillars too, but I can usually catch and destroy those in my regular forays. Fungus is not usually a concern here. Spider mites …

How about aphids? I just pulled this leaf from one of my tomatoes the internet says these are “aphid casts” on the underside. 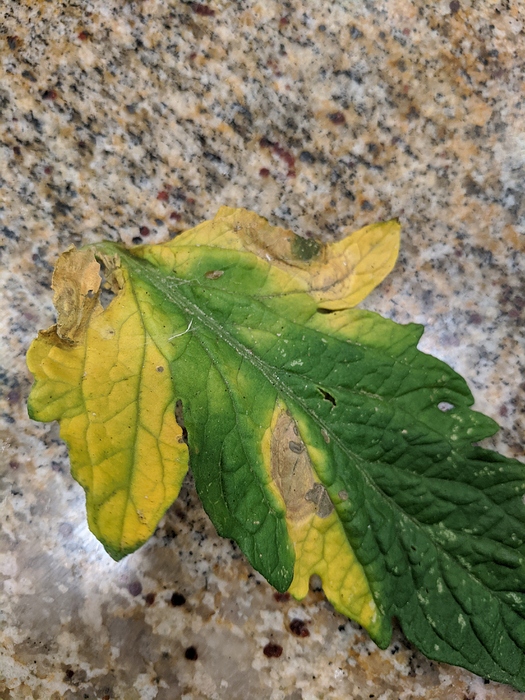 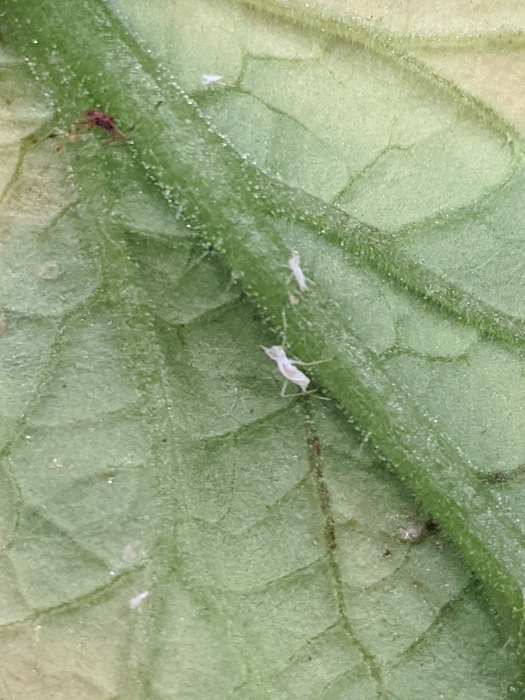 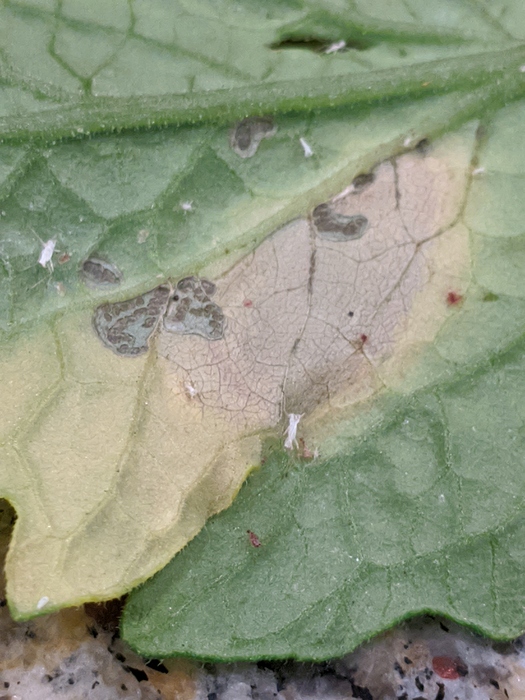 I think this leaf has thrip and/or spider mite damage too. 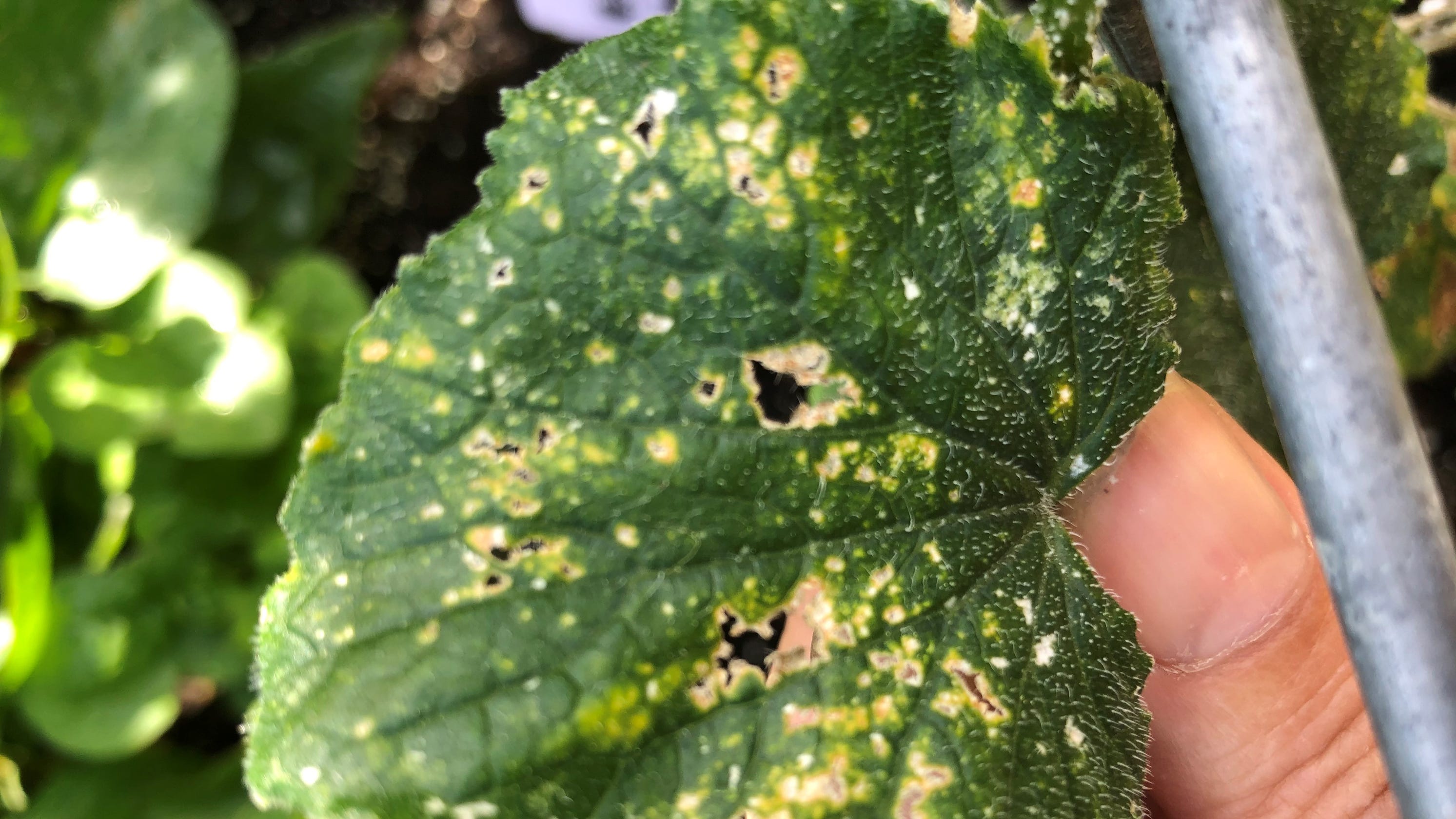 What's causing the spots on the leaves of my tomato plants?

Master gardener answers readers’ questions about plants, garden tools and their use, and gardening techniques.

Yeah. I think that’s one of several… and I’m concluding that facing the wild and weedy neighbor run off slope is the culprit, so my doing anything is futile as long as the raised beds stay where they are…

I did think about row covers to physically block the pests, but this is likely a losing battle given the location.

Yeah, I think you have to put those on BEFORE you have a problem.

Yeah. If I had any inkling… and they were very insistent that’s where the fancy raised beds needed to go.

Meanwhile it’s warmed up a bit and my tomato plants have gone nuts… wondering if we should give some - or many - away.

You can never have too many tomatoes