So, the butchers’ counter at the supermarket had this 1kg piece of boneless free range pork shoulder going at a price that meant it simply could not be left. It went in the freezer while we had a think about it - it’s not really a cut we’re familiar with.

The conclusion was that we should try and make pulled pork - something we always enjoy on trips to the States, often in slightly grubby BBQ places in out of the way small Southern towns. Now, I know we can’t replicate the joys of eating piggy at a proper pit barbeque but we’re checking out the internet to pick one of several recipes for cooking it in the oven. I quite like the one that suggests basically baking it in a casserole with cider.

So, dinner #1 is sorted. Piggy, coleslaw, BBQ beans, corn bread. As a dessert, I may try to replicate the banana pudding we had at the Smokehouse in Galax, VA (before a great Friday night “old time” music concert at the town’s theatre)

But we’ll never eat a kilo of it. Which is where I ask for your help about what to do with the rest. Is it just sandwiches for the following couple of days. Or can we repurpose what’s left? Will it freeze for a repeat pulled pork session? Should I cut it in half and make something completely different with the second half? And, if so, what?

Yeah, make 2 different things with the same chunk of meat.

Your dinner #1 sounds delicious. Then that pulled pork can go in a bunch of different directions if there’s little or no sauce on the meat:

Pulled pork alongside a tray bake of winter vegetables seasoned in olive oil and S&P, such as butternut squash or sweet potato and onion wedges. Throwing in a handful of cherry tomatoes near the end of the baking time is lovely. It’s nice if the pulled pork is actually saucy in a BBQ sauce of your choice.

Pulled pork as a “carnitas” style taco filling. You probably won’t have prepared the pulled pork carnitas style, but when the shredded meat is plain enough, honestly I’ll simply heat and serve it with a bunch of taco fixings along these lines.

Pulled pork as pizza topping. Never would have thought of this myself, but there’s a place in my neighborhood that does a break-the-rules pie with a sparse amount of pulled pork in just a dab of slightly spicy BBQ sauce, caramelized onions, and Gouda and mozzarella cheese. A restrained hand with toppings and a well-done pizza crust is what makes this combo work—otherwise it could easily be a sodden mess.

Pulled pork sandwiches with coleslaw. If you are going the sandwich route, warm pulled pork and cool coleslaw on a bun makes a deeply satisfying sandwich. A lunch place we like will melt cheddar over the pork though I don’t need the cheese myself. Tangy pickles on the side or a few rings of quick pickled onion or jalapeño on top would be optional for zing.

I quite like the one that suggests basically baking it in a casserole with cider.

Not to yuck your yum (especially because I’m not a BBQ expert and you may be settled on this recipe) but that sounds so far from a pulled pork recipe it may not be appropriate to recommend pulled pork leftover recipes. This technique almost sounds like a souse or pickled pork (which isn’t bad, but very, very far from pulled pork). As such, if you do go with that recipe I might suggest beans like this Good Eats recipe for the leftovers.

If you do choose to go a different route, a lot of folks will braise in a ton of ketchup based BBQ sauce which is also not “real” pulled pork but somewhat closer in terms of flavor profile. The upside is it’s very easy and you can even make BBQ sauce at home with pretty basic pantry ingredients but you don’t get the chance to sauce to taste since it’s already drowning in sauce which also limits the versatility.

The closest indoor recipe I’ve found is this America’s Test Kitchen one but it’s pretty fiddly so even a pulled pork fan like myself hasn’t made it more than a handful of times.

Finally, keep in mind that (depending on the technique) you likely will lose a lot of mass in moisture so the resulting dish may not have as many leftovers as you think.

you may be settled on this recipe 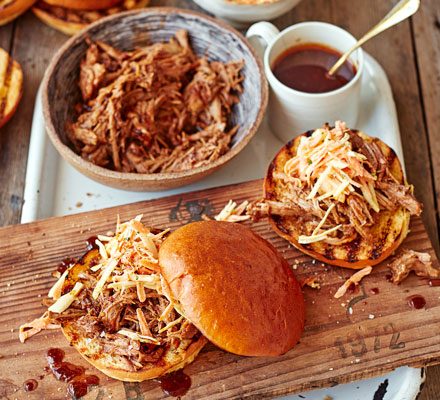 Hah, the recipe seems more reasonable with the rub as well as the vinegar. That said, that still seems like an awful lot of vinegar for the amount of sugar involved and I suspect it will turn out very, very sour.

Also, it’s a little unusual that it has you retain the skin until the very end only to discard it. Again, I’m not an expert at all but generally I’ve seen pulled pork made without skin. It’s included in some BBQ (like whole hog) but people generally retain it as a feature calling it crispy (although in my opinion it’s almost always just hard and chewy).

I’m not 100% why vinegar is suggested as the braising medium (and so much of it) since pork would release quite a lot of liquid by itself and has such a high collagen content that it doesn’t really dry out like a cut with less collagen and fat would normally. Sorry if I’m being a busybody but I’d likely retain the rub from the recipe but employ one of the below two techniques:

Serious Eats Carnitas: As explained in this recipe it doesn’t really require much in the way of braising liquid and is somewhat similar to a confit but will still get you some crunch (like bark on good pulled pork)
Momofuku Bo Ssam: While this is neither BBQ or Bo Ssam, it is somewhat akin to BBQ in that you get a very good bark even though it’s all made indoors. That said, it works well with a very large, skinless shoulder type roast (despite calling for skin-on in the recipe) so a relatively small 1kg piece of pork may not hold up as well.

The only liquid in the recipe is the cider. No vinegar (except for what might be in the BBQ sauce)

Holy mackerel, what a reading fail on my part! Sorry for such a large and wordy digression.

Cider makes a lot more sense and should work fine although the skin instructions are still an odd feature and (along with covering the casserole) will almost certainly eliminate any possibility of bark. Bark is one of my favorite things, though, so I’m very likely overemphasizing its importance.

Pulled pork freezes well. Divide it into single-meal portions and enjoy over the next few weeks/months.

That’s a weird recipe.
No heat and the cider element make this bizarro.

Hello @Harters! You’re getting some good advice here, and I’ve got a few suggestions to add.
Firstly, @tomatotomato had some great ideas for what to do with leftovers. Here are a couple more ideas for you: pulled pork nachos - tortilla chips, pulled pork, green chiles, cheeses (medium cheddar, pepper Jack), etc with salsa for scooping. Also, mini sliders - buns that are hooked together, sliced in half horizontally as a whole unit & spread with Mayonnaise & BBQ sauce mixed together, pork layer on all, cheddar cheese, top with cut layer of rolls, wrap in foil and heat til cheese is melty. Cut into individual rolls. You could also use the meat in a tortilla type soup or posole. @ernie_in_berkeley is correct that leftovers freeze well.

As far as cooking the roast, you could add some chiles for heat if you want, but the flavor profile will be forgiving. I do recommend adding a generous amount of salt or garlic salt to the rub. If I was making this, I’d cut the cider down to 1 cup max, maybe even 1/2 cup. I slice a large onion, put the roast on top & typically don’t add extra liquid. Cook or bake low & slow. You’ll be amazed at the juices in the pan. I’ll drain it, refrigerate, defat and use in soups, stews, or chilis, freezing until needed. Have fun with it, it will turn out just fine no matter how you choose to do it. Please let us know how it turns out.

Thanks, folks. I knew I could count on you.

I’ll go with the full recipe for pulled pork, reassured leftovers will freeze fine . I thought that would be the case - I often freeze leftover roast lamb, cut into shards, to use for a cheats shawarma.

I often freeze leftover roast lamb, cut into shards, to use for a cheats shawarma.

^ Useful tip to keep in mind. Thanks!

Useful tip to keep in mind.

When I defrost, I check it over - usually cutting off much of the fat. I then give it a coating of olive oil and a hefty scattering of baharat. Then fry on a medium heat so you get a bit of crispness but you’ve not overcooked it. Fab!

The best thing you can do with it in the oven is Cuban style pork. there are lots of recipes on the internet. The keys are lots of garlic and sour orange, and slow coking. Invite friends over. Add some black beans cooked with lots of onions and garlic, rice, good bread, and a nice salad. you’ll love it If there are leftovers, make Cuban sandwiches

Or pork gyros- which are actually a thing - whereas pork shawarma isn’t really a thing since pork is traif and/or whatever the Arabic word for forbidden is in the places that have shawarma.

lots of garlic and sour orange, and slow coking

Even if it’s already cooked to the “pulled” stage?

I’ve only had poutine once - at a place in Burlington, Vermont, where they did it with duck. Loved it.