Supposedly to be a birthday dinner, a very good excuse to eat out. Here we go! A newly opened restaurant by chef Antonin Bonnet in the Montparnasse area.

Bonnet was the ex-chef of the Sergent Recruter, he has worked as chef in Michel Bras, Morton and Green House in London etc. He evaporated from the cooking scene after the failure of the project La Rue Jeune. Long story short, LRJ was a promising project supported by the city and invested by a businessman, Cédric Naudon. The idea was to build an animated street in the capital, with a few restaurants overlooked by Bonnet, and some shops by some young creatives. The project failed as the investor turned out to be a crook. The empire went bankrupt, Sergent Recruter was sold.

Bonnet returned with a much lower profile. The restaurant was in fact opened in October, mostly positive review from the media, not a lot of reporting on the restaurant from the diners. I loved my meal of Sergent Recruter in 2013, and I’m glad that Bonnet has his own restaurant now.

The meal was a choice of either 4 or 6 courses 48 or 65 euros, and some additional dishes either you can substitute an existing course or order as extra. Yesterday the choices was Baden oysters, truffle from Richerenches and pasta of Cucugnan.

Squid of Saint-Jean-de Luz with spinach and ink . My fav dish, the fact that the peanut and citrus powder on the squid was amazing. 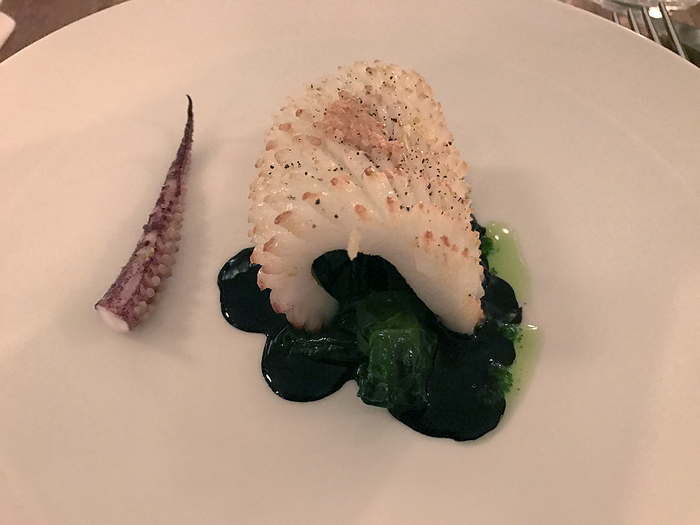 Soft boiled egg, cabbage from the Bec-Hellouin farm, covered by a thin layer of beet and purple basil jelly with a praline and fresh hazelnut vinaigrette. Quite astonishing, we sensed like eating a dessert but not exactly that very sweet. It was quite a surprising dish. 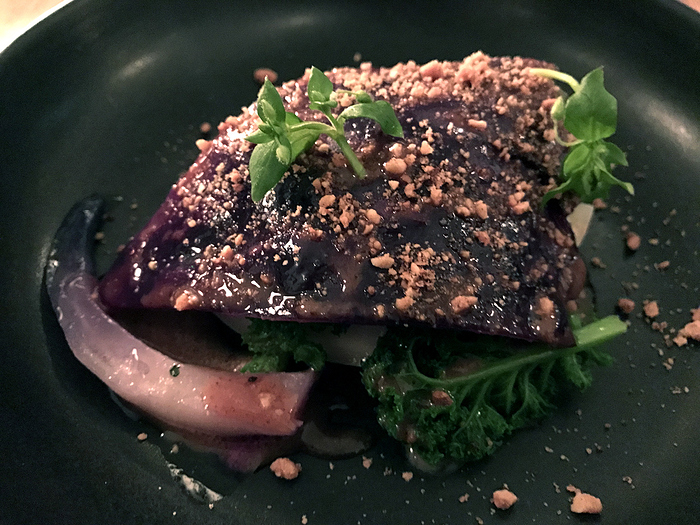 Rouget, Rose of France potato, chard in a curry sauce, like travelling in Thailand except the spiciness, hubby’s fav dish. 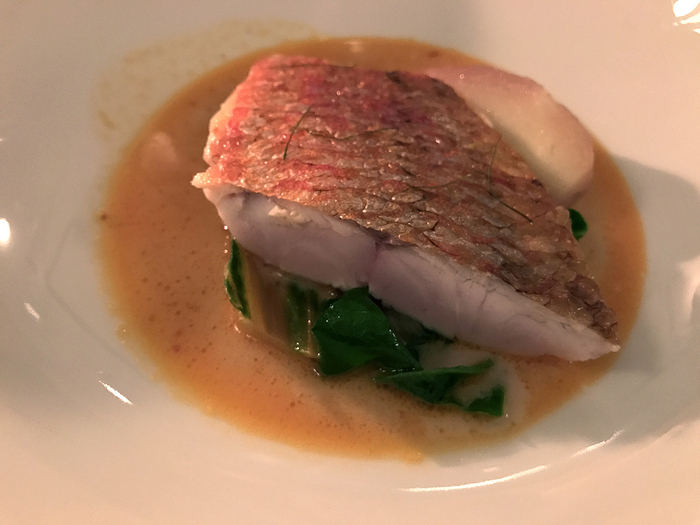 First dessert Carré chocolate with tamarin, crispy top and almond biscuit, elderberry ice-cream
I like the chocolate pastry, soft and crispy, the strong choco flavour, while the ice-cream was a bit on the soft side, too subtile. 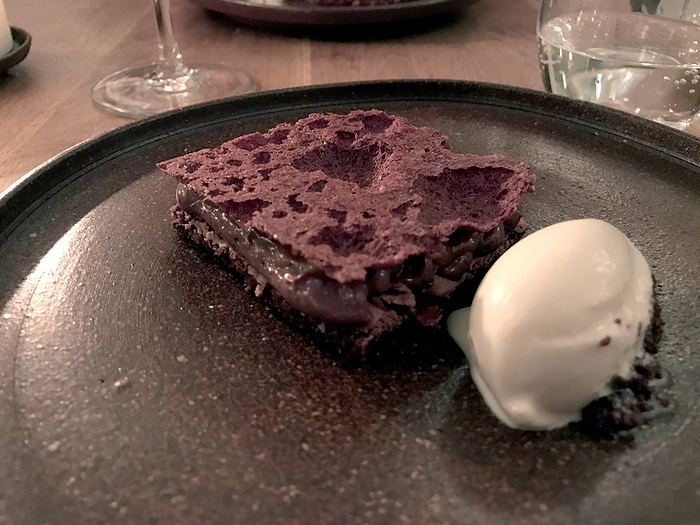 Lemon tart from Michel Bachès, yuzu marmalade and milk mousse. Very fine crust and a strong marmelade. We really like lemon tarts, we approved this one. 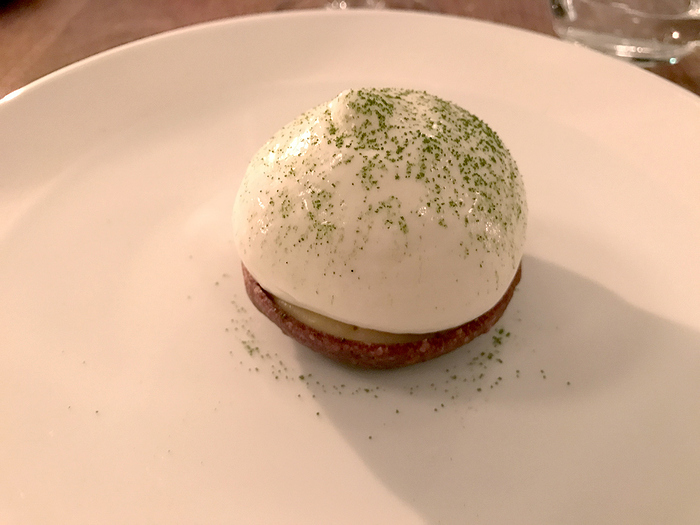 I got 2 glasses of wine to pair with the meal : Arbois Fleur de Savagnin from De la Tournelle domain 2014 for the fish dishes and a Vin de Savoie Cuvée Marie-Clothide, A.Berlioz 2015 to pair with the lamb. I love the white from Jura. Mr naf got a Brasserie de L’Être’s Oliphant Jerakin beer 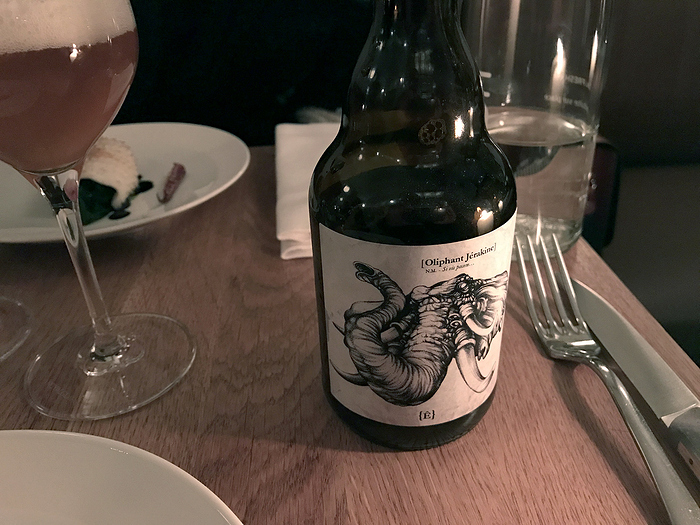 It was a great meal, one of the best for a while! Complex but yet simple and focused at the same time. A lot of chefs these days like to put a lot of all ingredients and end up messy dishes, leaving the diners wonderings why the ingredients are doing on the plates, Bonnet succeed in this aspect a creative and modern cooking with his personal touch. The bread was house made by the chef with the Rouge de Bordeaux wheat by Roland Feuillas. 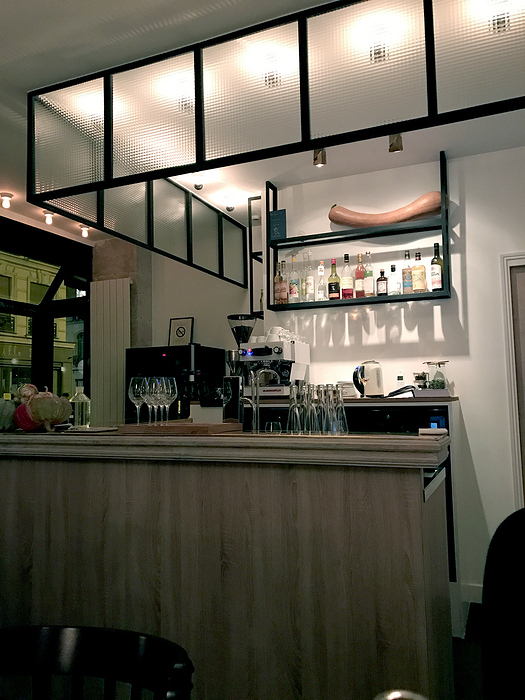 Service was efficient the whole night. The personnel explained very well when we asked questions. Just a side note, we got slightly annoyed when we arrived 10 minutes early and was told that the restaurant was not open yet and refused to let us in. Apart from this, RUN before it will get it’s stars and the long list of wait and probably an increase of price.

5 Likes
What's for Dinner #17 - 01/2017 - the New Beginnings Edition
Paris- football, photographs and food ?
Paris - Two Good Dinners in the 6th
Paris dinner boat question (plus another)
Thoughts on my Paris dining schedule?
In which restaurants and with which chefs would you like to be confined?
pilgrim May 25, 2019, 1:11am #2

I’m surprised that there are no replies to your excellent report on this good address. We enjoyed several fine dinners at Quinsou, remembering exceptional food and delightful service. I would certainly recommend it for a dinner of highly sourced, very well handled product and insightful preparation.