Cooks! Do you use arugula in any way other than raw in a salad or to top a sandwich?

And, I’d love to hear some nontraditional ways to cook okra. I’m going to try to grow it in my garden for the first time this year, and am hopeful that it does well and I have an abundance. I’m particularly intrigued by Saregama’s microwave method. Would you mind providing instructions? I have seen you say that you do oil and herbs, s&p, and then watch it carefully so it doesn’t get burnt. Could you share a little more about your method? How often do you stop and toss it? Approx how long does it cook before it gets those lovely brown crunchy bits. Thanks!!

Okra is good in curries, chile, and anything with a sauce that conceals/uses the “slime”. And of course, bhindi masala is a standard dish.

Do you use arugula in any way other than raw in a salad or to top a sandwich?

Yes, when I get good farmer’s market arugula it is very nice stirred into pasta right before serving.

I use it in a cold pasta salad with summer tomatoes. I have 1/2 a bag right now, and because it’s winter, it’s a little spicier and a little more fibrous than usual. So I’m trying to figure out a good use. It was a bit much in a salad.

I make this, minus the chorizo. 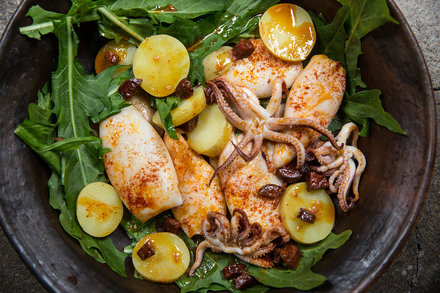 Everyone knows about fried calamari, but pan-roasted is a different beast entirely This easy technique begins on the stovetop and finishes in a hot oven In less than 10 minutes, you have savory roasted whole-body squid, made spicy with Spanish...

Besides eating rucoIa raw I also use it in Vietnamese-style salad with seafood or seared beef. Fish sauce, garlic, chilies, pinch of sugar, lime juice. Mix everything well. The lime juice softens the rucola and makes it less peppery.

After having been to Okinawa I like okra briefly steamed, dressed with soya sauce, sesame sauce and sprinkled with bonito flakes.

Paywall block. Do they use arugula as the greens in a salad w/squid and chorizo? Suzanne Goin has a salad like that in Sunday Suppers that we used to make and like. It’s been a while.

Here’s my version, edited to avoid copyright violations, and de-chorizo’d (pretty sure you can figure out how to incorporate it). And the paywall is so weird! The link opened right up for me before, and now it’s locked.

Simmer potatoes in salted water until tender, about 20:00. Drain and keep warm. Preheat oven to 475, with a rack in the highest position. Rinse the squid and pat dry, then cut large tentacles in half, but leave the bodies whole. Season with s&p. Heat a large cast-iron skillet until very hot. Add oil, cayenne, and then the squid in one layer, tossing to coat with oil. Put the pan in the oven and roast the squid until the bodies puff and start to brown, 6ish minutes. Remove from the oven, reserving the liquid in the pan. Slice the potatoes, and cut the squid bodies into rings. Plate the arugula, top with squid and potatoes, then pour the cooking liquid over top and sprinkle with paprika and parsley.

Years ago in Rome we had a dish of beef filet shreds cooked with rucola/arugula. At the time I recreated it, but have since forgotten how it went. I think it was called straciatelli di manzo.

Okra can be sauteed whole in oil or butter with garlic. Just cut off the barest slice of the end, so that the pod stays closed.

when I get good farmer’s market arugula it is very nice stirred into pasta right before serving.

I do that, too, except I don’t have your high standards. I even use slightly wilted supermarket arugula stirred into pasta, soups, etc.

I’ve also used arugula quickly pancooked with shallots, sliced mushrooms and halved grape tomatoes as the “base” for a frittata,

Okra is awesome grilled. Wash and dry whole okra, give them a very thin coating of olive oil and sprinkle them with some sea salt, then slap them on the grill for maybe 3 minutes a side. Fantastic flavor, no slime, and easy eating.

My other okra go-to recipe is: wash and dry okra (the drying is very important to eliminate the slime factor when you cut them). Slice them in coins, dredge them in cornmeal plus salt/pepper/cayenne or other spice powder (I use Tony Chachere’s), and saute in a pretty hot pan with olive oil. Stir/flip frequently until they are bright green and get just a little bit of char, then they’re done. If you happen to have fresh corn, cut it off the cob and throw that in the pan too. Super tasty, no slime.

Arugula is nice as a pizza topping (add it in the last few minutes, tossed first in a little olive oil).

How long does the okra have to be dried?
I have never had success the few. times I tried okra, they were slimy , never crunchy
Am planning to make shrimp étouffée soon per request from son,
wander if okra would work?
love blistered shishito pepper with Evoo and lime salt when they were available, would cut have them on the counter as snack. Perhaps okra would work the same?
https://www.washingtonpost.com/news/voraciously/wp/2020/01/07/master-a-cajun-classic-in-30-minutes-with-this-easy-shrimp-etouffee/

I wash my okra maybe 45 minutes before cutting it, then pat it dry with paper towels and leave it sitting out in a single layer on a paper towel. By the end of that it’s dry enough to cut with very minimal slime. Once it’s sliced and tossed in cornmeal, the slime is gone. Sautéing it fairly fast and hot gets it a little crispy. I don’t like batter-fried okra…too much batter, not enough okra flavor.

Check out recipes for Okra from Indian and Indonesian/Malaysian . The Pods being dry before cutting and very high heat are key to reducing slime. Okra is not typically used in Étouffée you may be thinking of Gumbo 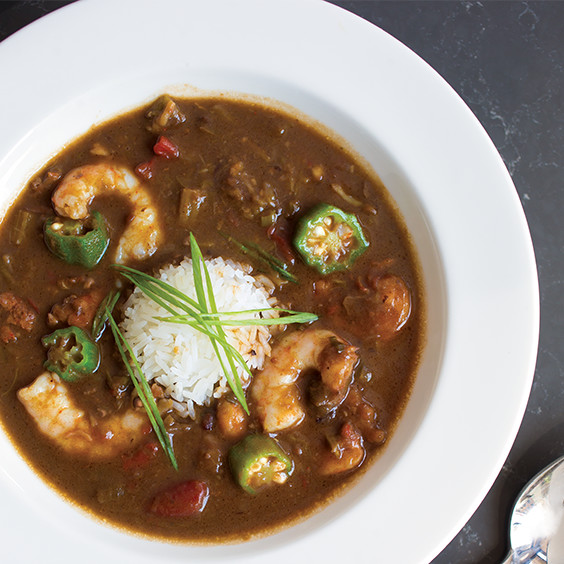 A very dark roux adds wonderful flavor to this Shrimp and Okra Gumbo.

Be sure to try some raw okra, small ones just off the plant. It’s one of my favorites. I love okra.
At the the cafeteria at work, they usually have a big bowl of mixed salad with various ingredients. They had an arugula salad that had what looked like anemic tomatoes in it, I was surprised to find out it was actually watermelon, and especially surprised to taste how well the two went together- each complemented the other to an amazing degree, especially since it was wimpy winter watermelon.

Be sure to try some raw okra, small ones just off the plant. It’s one of my favorites.

Yes. I had some wonderful young okra from the Union Square Greenmarket in NYC last fall that I ate raw. It was terrific. The window was very short though. Two weeks later the same stall had larger okra that wasn’t as tender and sweet when raw.

And my microwave “fried” version

I detest slimy okra… indian preparations are prepped not to be - fresh okra should be rinsed, then allowed to dry before cutting - I shake them out in a colander, then into a dish towel, and then spread out on another dish towel. Avoid covering okra while cooking to avoid slime… and no water added. Roasting works well, aside from pan-frying. I’m also more generous with oil where okra is concerned.