Pork butt is a good deal, but not if I don’t eat it. 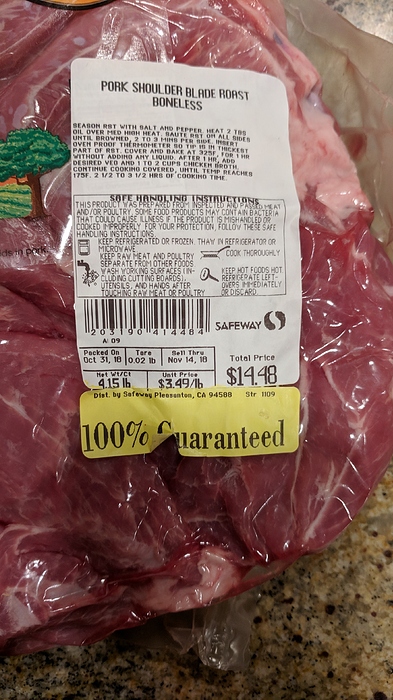 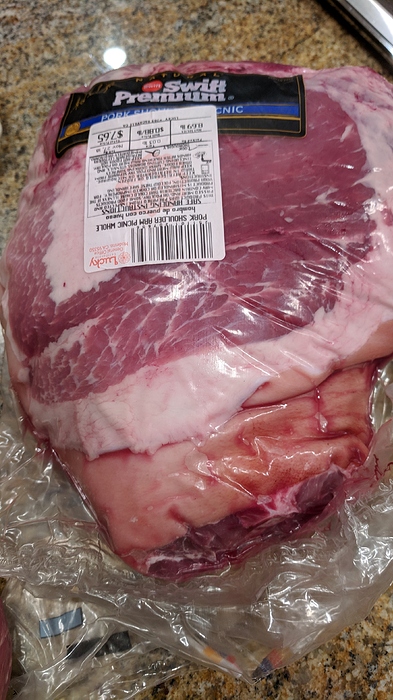 I thought the first boneless roast was a good deal, but the second “pork shoulder arm picnic whole” at $0.88/ pound seems even better! I can’t seem to keep straight when I might want the pork shoulder/butt, picnic, or ham.

So of course, I have both, and soon leaving town for a week for Thanksgiving!

I’m doing my homework, but would love my fellow Onion’s thoughts; can there be TOO much pork?

but also love this article from seriouseats eats on Conchita pibil.

Sorry, Pulled Pork, It’s Cochinita Pibil’s Moment
I made it in an Instant pot some time ago! Very good!

Soooo…
Is $0.88/pound a good deal?, and
What would you do with all this pork-o-liciousness?

What’s the Difference Between Shoulder, Picnic, and Boston Butt

Is $0.88/pound a good deal?, and
What would you do with all this pork-o-liciousness?

Scored the skin crisscrossed about half inch grid. Into the oven. Half hour at 450 F, then F 350 F for about an hour and a half. Until internal temp at 150 F. Came out tender and juicy and the skin was crackling.

Will do again if I see the same deal. Gonna brine with The Costco brine mix next time.

Love pork shoulder! If you don’t mind washing your pot, I have an excellent and simple recipe of pork shoulder cooked with milk.

If not, you have to try mariacarmen’s Puerto Rican pernil, pulled pork recipe. So good!

Thank you both! Since I posted, I have been reading about how the “picnic” end is different from the “blade” end, and about how to get crispy skin. I remembered a Serious Eats article about using a baking soda “wash”. Anybody tried this?

I don’t see mention of baking powder in that one, so maybe it wasn’t Seriouseats.

The baking powder is mentioned here;

In any case. I think I’m going to wait until after Thanksgiving. 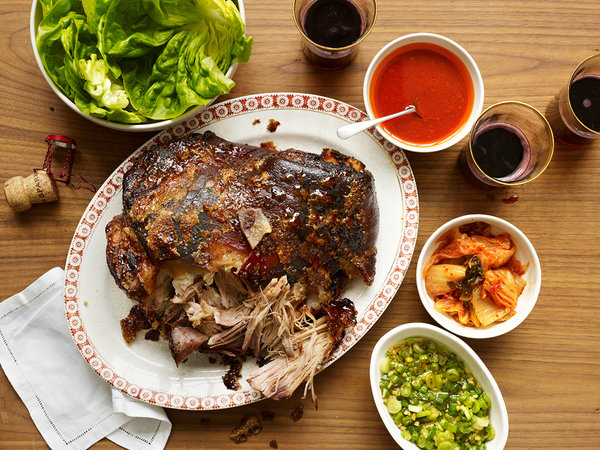 This is a recipe to win the dinner party sweepstakes, and at very low stakes: slow-roasted pork shoulder served with lettuce, rice and a raft of condiments The chef David Chang serves the dish, known by its Korean name, bo ssam, at his Momofuku...

Yes! I remember trying that!

A favorite in our house is pulled mojo pork for tacos:

Get a large bone-in pork shoulder/butt; cut slits in the meat and stuff with slivered garlic; season with salt, pepper, and a little cumin and Adobo con Sazon (Mexican seasoned salt). Brown the meat well on all sides, then transfer to a slow cooker/casserole and cover with 1 bottle of Goya Mojo Criollo marinade and 1 bottle of light Latin beer. Add a bay leaf and scatter half a sliced onion and a few cloves of whole garlic over the top. Cover and braise on low heat until the meat is very tender and pulling away from the bone. Let cool a bit in the cooking liquid, then take the meat off the bone (separate out as much fat as you can). Shred the meat into chunks with two forks, drizzle with a little of the cooking liquid, and crisp up under a broiler before serving.

That sounds good! Do you brown the meat whole, or cut it up?

Pork vindaloo and Char siu pork would be on my list.

Wow! Browning a 9 pound shoulder sounds like it might take mad skills! Might be outside my “scope”. I might have to try it with the boneless shoulder first. I don’t think my pans and cookers would be big enough for the picnic.

Good ideas! I’m thinking one of these dishes should include something I cut up, and that might benefit from freezing in portions for future meals. Have you tried freezing either of those?

The char siu says pork butt; have you tried it with the “picnic” cut? I love char siu too. I can buy it nearby though, and I’m thinking better than I can make.

I LOVE Pernil, a dish I associate with my mother. We often ate it with my brother’s and sister’s friends, while growing up in NYC, and my mom was always trying to make it.

I’ve tried a few times, trying to get a cut with skin, but not yet in milk !

ETA; so it’s not the Pernil that is cooked in milk. Seems like I recently considered a recipe for a protein cooked in milk, then had second thoughts after reading the reviews. I think it was chicken.

Share the pork in milk recipe please, but it will probably go on the back burner! (Ha ha).

I’m thinking one of these dishes should include something I cut up, and that might benefit from freezing in portions for future meals.

This is always good and freezes well: https://www.google.com/amp/s/www.epicurious.com/recipes/food/views/pork-stew-with-sweet-hot-peppers-from-the-abruzzo-351490/amp

Both freeze well. I agree on purchased char siu… maybe red cooked pork or one of its variations instead.

I do love pork belly!

Share the pork in milk recipe please, but it will probably go on the back burner! (Ha ha).

Here it goes, quite straight forward and easy!

In a dutch oven, cover meat completely with milk, add herbs and garlic. Bake in a covered pot at 180ºC / 355ºF until the milk is completely evaporated.

The pork is eaten both hot and cold, accompanied by the confiture of milk at the bottom of the casserole.

I usually rubbed the interior of dutch oven with garlic to ease the cleaning of cooked milk. It usually works.

can there be TOO much pork

As you’re going away, I’d suggest some sort of casserole for freezing. If you come up with a good recipe, please share it - as we bought a shoulder joint at the market today. It’s gone straight in the freezer pending a decision on casserole - we’ll eat half and freeze the remainder for a future quick “brown gloop” dinner.