Looks like we’re in for another spicy quarter - MALAYSIAN was the clear winner of this winter’s Cuisine of the Quarter contest! Though I am a huge fan of southeast Asian food (Thai, Vietnamese), I know very little about Malaysian cuisine. @naf pointed out in the nominations thread that there are three major ethnic groups in Malaysia, all of which have their own “micro” cuisine, so this should be a varied and interesting quarter. Looking forward to a lively and delicious discussion!

I’ll dig out Ping Coombes “Malaysia”. Havent really cooked much from it up to now. Ping was the 2014 winner of the TV show Masterchef in the UK

I strongly recommended everybody interested in cooking Malaysian dishes, to read the excellent restaurants /street food review posted by @klyeoh on Malaysian food in the Asia forum, they can serve as inspiration and good starting point. It will also be our honour if Peter could spare some time answering our questions or comment on the dishes.

In 2016, I have spent 2 weeks in MY, mainly eating, I ate mainly Chinese Malaysian food, a few Malaysian meal, and not much MY Indian food. In Paris, I see only a couple of Malaysian restaurants, not sure about their authenticity, we never dine in any of them.

Now it is good time to start cooking, I don’t own any Malaysian cook books, if anyone has any good recommendations, please share.

Unlike other bits of the past British empire, we don’t have too many Malaysian restaurants in the UK - probably because there hasnt been significant numbers of immigrants. I can only think of a couple of places in my metro area. We’ve tried both. Once each. Neither seemed that good and we’ve never had the urge to go back.

Agreed that it would be great if Peter could guide us through this.

I have eaten at a couple of Malaysian places in NYC, but the menus were very similar to Thai/Vietnamese menus, so I don’t know how authentic the recipes were. It has been years, though, so I will certainly do a little research to see if there are any newcomers to the scene.

According to EatYourBooks, I have 68 Malaysian recipes in my cookbook collection. I have made a few of the ones contained in Cradle of Flavor, and we both loved them very much. Will pull that book off the shelf and review for this quarter.

I strongly recommended everybody interested in cooking Malaysian dishes, to read the excellent restaurants /street food review posted by @klyeoh on Malaysian food in the Asia forum, they can serve as inspiration and good starting point. It will also be our honour if Peter could spare some time answering our questions or comment on the dishes

Please feel free to ask anything you’d want to know about Malaysian cuisine, I’ll be most happy to help.

MALAYSIAN CUISINE can be broadly divided into 3 categories for a start:

Below these 3 broad categories, you will find the sub-categories like Cantonese, Hokkien (Fujianese), Teochew (Chaozhou), Hakka, Hainanese, Hockchiew (Fuzhou), etc. in the case of Chinese cuisine.

Singapore has a shared history with Malaysia, and hence its culinary makeup and characteristics are largely similar to Malaysia’s, but with some inevitable regional differences.

That, in a nutshell, is Malaysian cuisine. I can go on forever, but will stop here - please feel free to ask me ANYTHING which you’ll like to know about the foods of Malaysia.

Dinner tonight was malaysian style Mee Goreng, or indian style fried noodles. I make noodles usually to finish odds and ends in the fridge. I had a pack of fresh yellow noodles i needed to use up. No real recipe, but basically I pureed some shallots, garlic and red chillies (several - we eat spicy) fried for a few minutes, then added sliced pork (I had a boneless chop i needed to use, but usually I don’t add meat). When that was cooked, i added some tofu pieces i had airfryered beforehand, added some boiled cubed potato, and sliced green cabbage. I thought i had some carrots but I was wrong. Added the cooked noodles and my sauces - light soy sauce, sweet soy sauce, and the secret ingredient - ketchup. Added some white pepper and I was done.

Usually its a bit saucier but I underestimated how much noodles I had so they came out a little drier than I normally make. 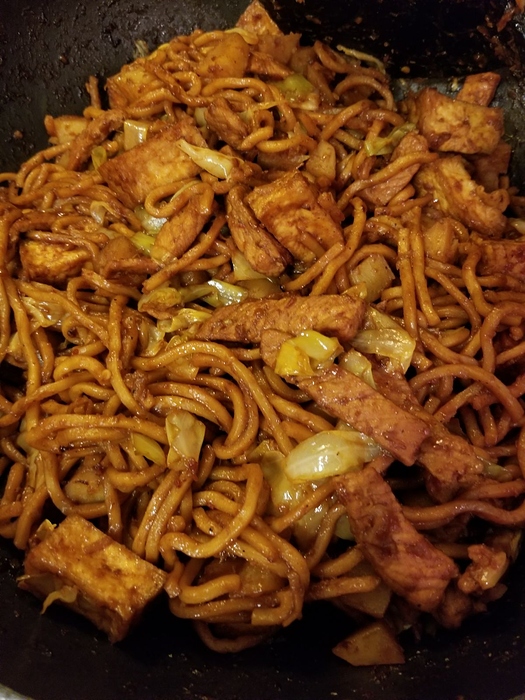 Looks fantastic. The ketchup makes me think this is maybe related to or at least somewhat similar to Pad Thai?

Looks fantastic. The ketchup makes me think this is maybe related to or at least somewhat similar to Pad Thai?

It’s really not similar to Pad Thai at all. Pad thai is rice noodles, with a very light, thin sauce that functions more as a flavoring as opposed to a coating. Mee Goreng is usually sauce heavy (wetter), and many versions are made by the mamaks, or Indian Muslims, so there’s a blend of Indian ingredients and Chinese ingredients. It’s a strongly flavored dish, whereas Pad Thai isn’t strongly flavored.

Some people use fresh tomatoes instead of ketchup, but we prefer the ketchup version in our house. Mamaks tend to add curry powder too (Indian influence) but I didn’t add it this time. Some add ground ikan bilis (small dried anchovies). When I make my vegetarian version, I usually add some curry powder as well. This version was a fridge cleanout, so it was more improvised than normal.

Good to know - I’m actually not a big fan of Pad Thai, but this sounds much more interesting!

I tried making some curry laksa using this recipe: 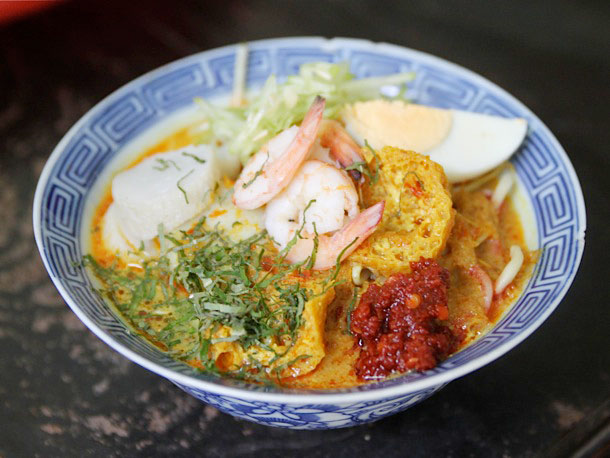 Debbie Teoh (food writer, caterer, and cooking instructor) taught us how to make laksa lemak in her family's kitchen in Melaka, walking us through the proper preparation of every element. Here's her recipe, which gives you a creamy, not too spicy... 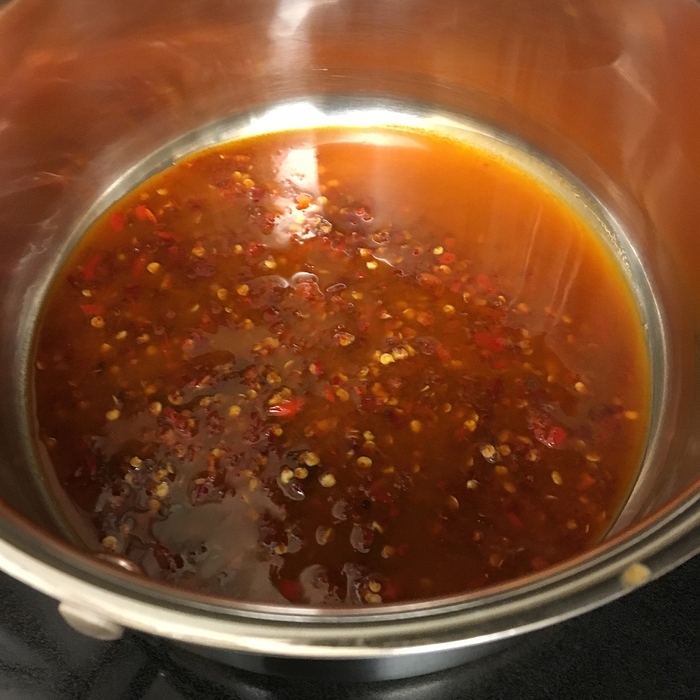 Laksa paste ingredients. I caused my Vitamix to overheat when blending and had to finish pulverizing in the food processor. Still a bit fibrous. This made a lot of paste. Seemed like a bit too much paste actually. I just used about a half cup’s worth with a pint of chicken broth for one serving. 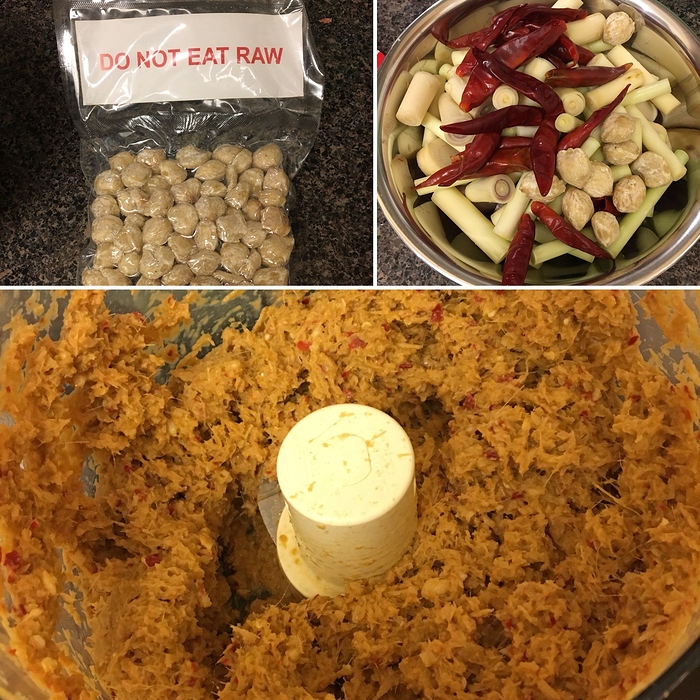 Frying the paste. Hopefully will not get poisoned by raw candlenut. Then added broth, coconut milk, and tofu puffs. 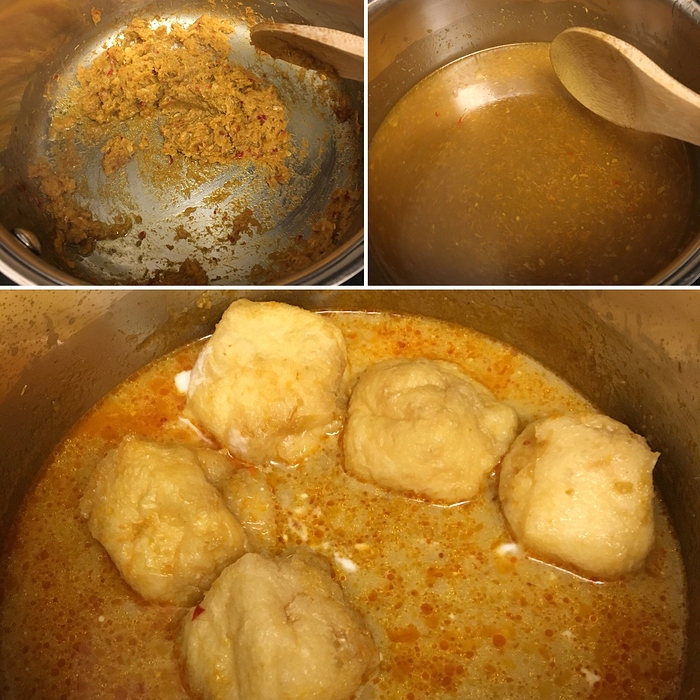 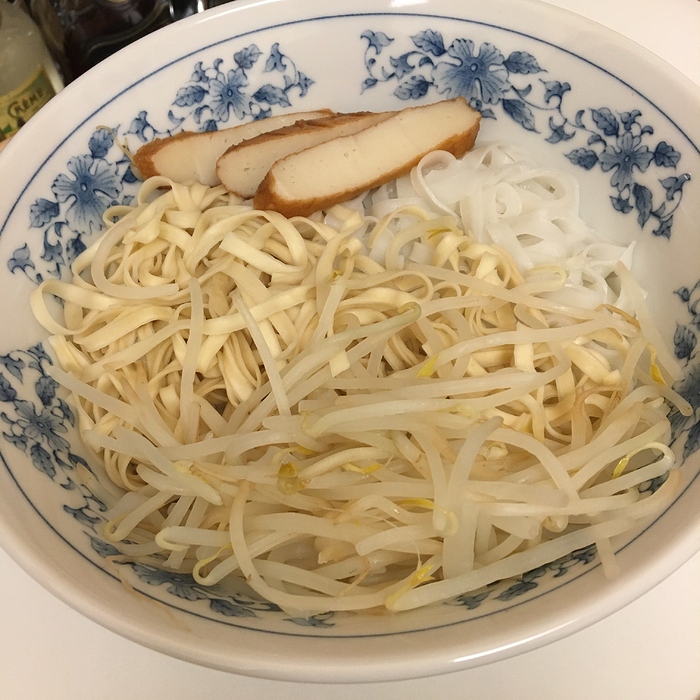 After putting everything together, with shrimp, egg, some rau ram leaves, and sambal. There’s some broth underneath. 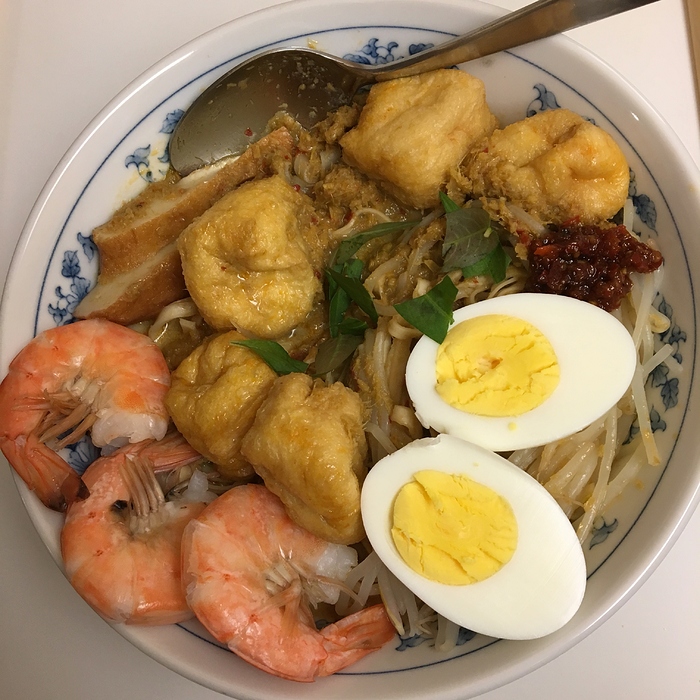 It came out ok. The broth tasted pretty good but there were still bits of fibrous vegetables in the broth, probably from the lemongrass, don’t know how normal that is. Maybe I should have peeled away more layers. Could be the galangal as well as that was quite tough.

I caused my Vitamix to overheat when blending and had to finish pulverizing in the food processor. Still a bit fibrous.

Next time, slice the lemongrass into thin slices before blending. Your pieces are too big. That should help with the fibers. What did you think of the belachan? Was it your first time using it?

Try it with the Chinese style egg noodles next time, which look like this. They have a different flavor and texture than the ones you used. 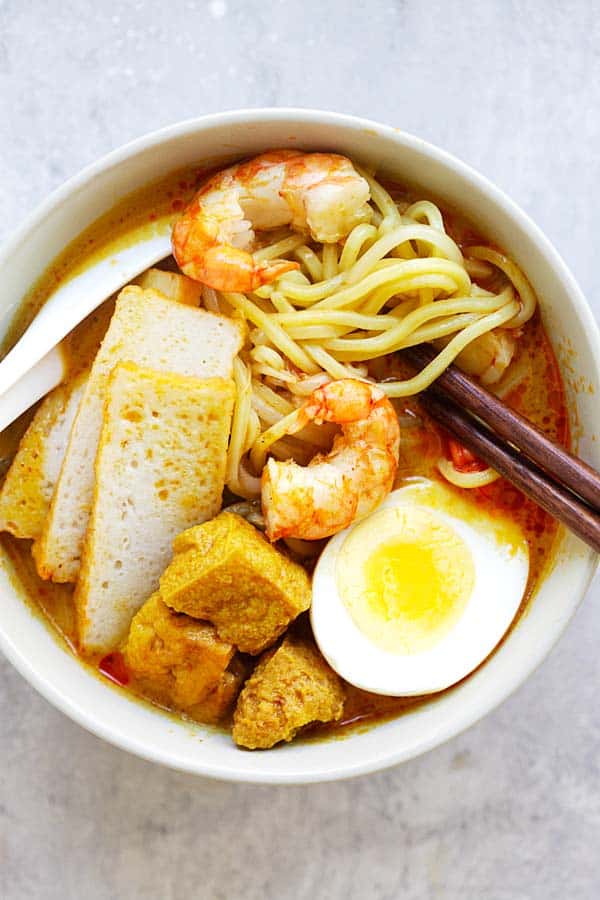 Thanks for the tips! Yes I think slicing the lemongrass into thin slices would have helped, also maybe I should have cut them down the middle and discarded more of the tough green part. The Malaysian shrimp paste I got (Shrimp & Boy brand) was quite dark and sticky, I needed two spoons to work with it. I’ve only used Chinese shrimp paste before and that’s not as sticky and it’s also lighter in color as well. Actually I don’t think I got the right type of paste as it’s labeled as ‘petis udang’ and not belachan.

The Malaysian shrimp paste I got (Shrimp & Boy brand) was quite dark and sticky, I needed two spoons to work with it. I’ve only used Chinese shrimp paste before and that’s not as sticky and it’s also lighter in color as well. Actually I don’t think I got the right type of paste as it’s labeled as ‘petis udang’ and not belachan.

Yes, belacan is different. It’s a dry crumbly block. You break off pieces and dry roast it before using. It’s very potent. My mom wraps it in a foil packet and roasts it on the grill outside so it doesn’t stink up the house!

I think the paste you have contains sugar, whereas belacan is just shrimp and salt.

I posted my pellet smoked pork butt last night when I had a party, but did not send pictures of my spring rolls as I fried them as the guests arrived. So, thought this might be the correct place to post them.

Made a ton of spring roll ingredients, Fujien style , wrapped 100 of them, freeze the rest. . I do not like to fry them ahead of time as they tend to lost their crispiness. Actually, Fujian style is to eat them wrapped in the very thin sheets (the ones I used comes from the Philippines, as thin as fillo dough sheets) by the guests themselves, garnished with a chinese herb called Ho Ti as well as crush peanuts with sugar and a splash of tabasco. However, for Americans, I prefer to wrap them, fry them at the last minute.
The ingredient inside was posted last year ( shredded poached chicken, chopped up shrimp precooked with ginger and spring onions, ground pork precooked with garlic and onions, tokwa - which is not just firm Tofu but is very old tofu, called LAO TAO KWA in my dialect, shredded in the food processor, then pre sautéed with garlic . I also shred onions, cabbage, carrots, snow peas all sauteed in peanut oil. The ingredients are just about the same quantity of each component ) Then, after all these individual ingredients are precooked, I mixed them in my large 18 Q sauté ( 18Q) pan ,simmer them for a few hours, taste for seasoning, add a bit of sesame oil and fried shallot .
Here are 6 left overs from last night which I fried for my lunch today. I serve them with with either La Choy’s sweet and source sauce or mixture of soy sauce, cider vinegar, crushed red peppers, freshly crushed garlic and a splash of hot sauce 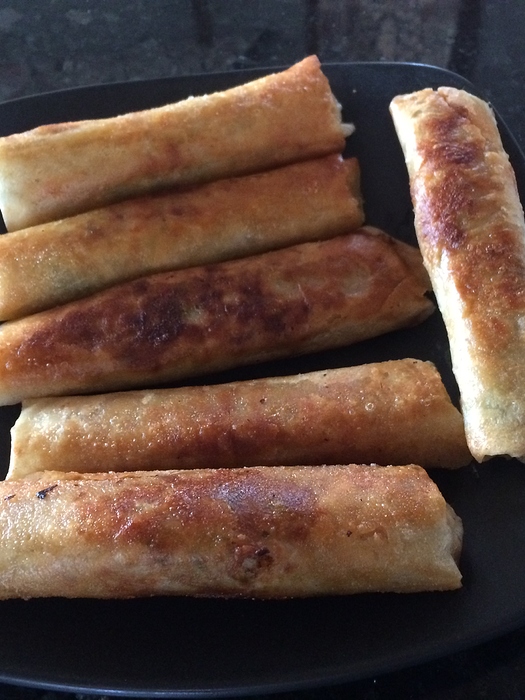 I’ve made a few Malaysian dishes this quarter, but i just keep forgettng to take pictures of them!

This is from last Friday. This is a dish called sothee, which is an Indian-Malaysian dish made with thin coconut milk, mustard and fenugreek seeds, turmeric, curry leaves, chillies, and vegetables. This time, I used onions, fresh green chillies, cabbage and carrots. Sometimes I add green beans if i have them too. It’s served at room temperature over white rice (there is rice under all that). On the side, i made a simple fish sambal type of thing, with onions, garlic, ginger, mustard seeds, dry red chillies, and fish curry powder (Baba’s brand from Malaysia.) 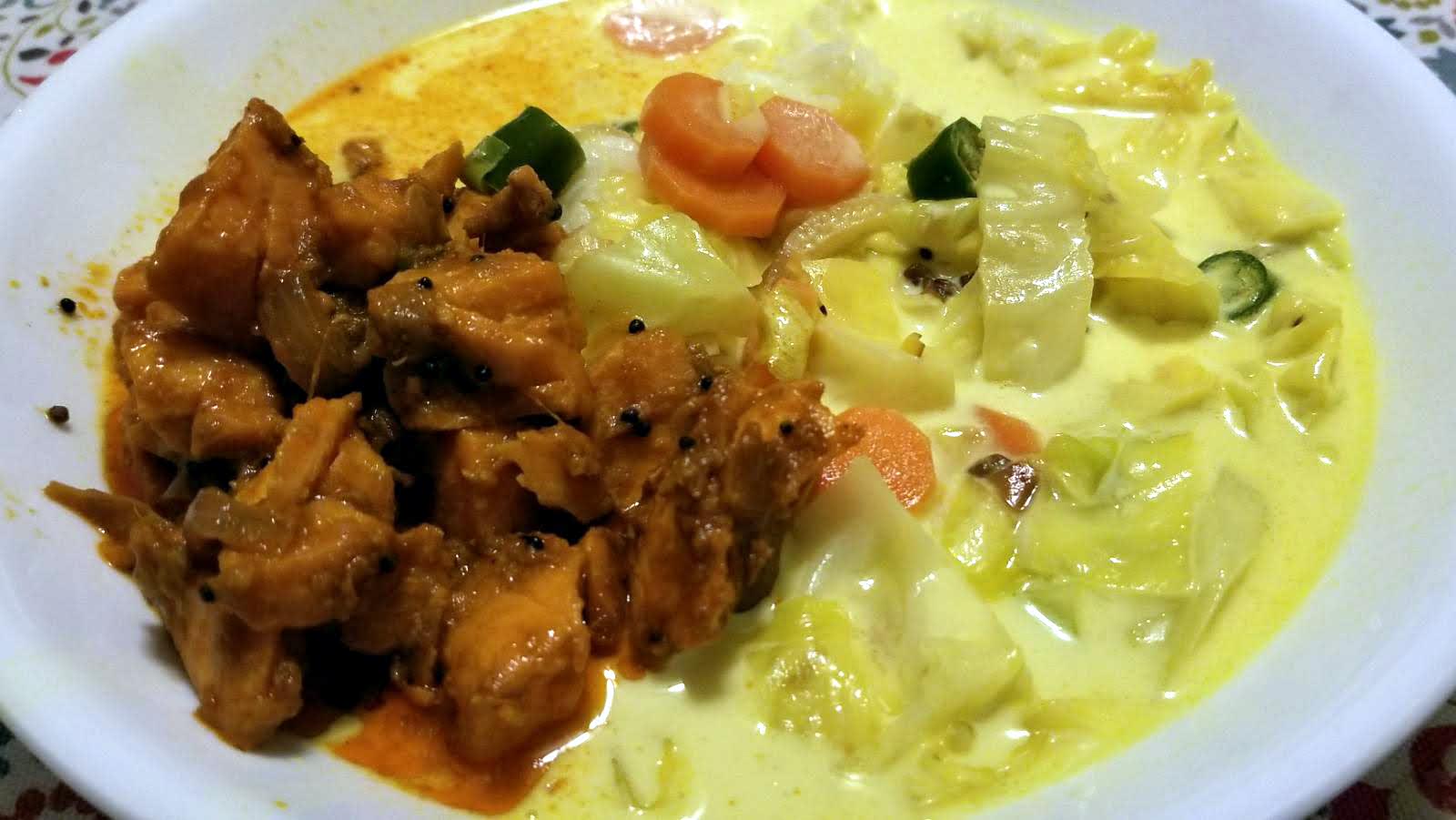 On Sunday, I made dried egg noodles boiled in water with with pork bouillon cube added to it. Threw in some frozen peas and corn during the last minute or so. After it finished cooking, I drained it, then tossed the noodles with kecap manis (sweet soy sauce), some shallot oil, some fried crispy shallots, and hot chilli sauce. Fried up some sunny side eggs, and that was an early Sunday lunch before the game.