Make ahead breakfast and lunch for 25; Make or buy?

This year I’m doing a mini-frittatta with Romesco sauce. Just about perfected, but overnight, it shrunk from the liner a lot, so not sure how to serve it pretty. 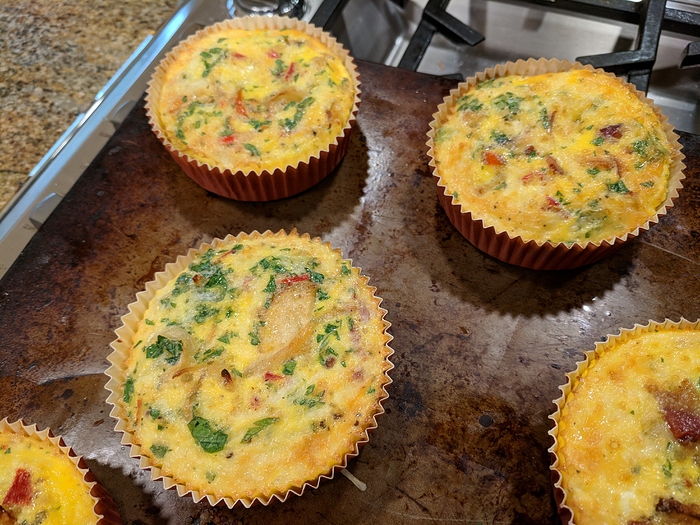 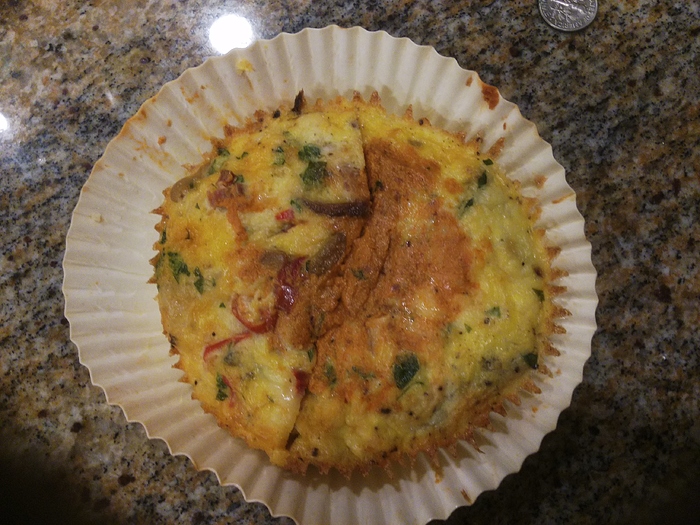 Also making overnight oatmeal, probably with cocoa and roasted cherries for our vegan.

Also, not too pretty. 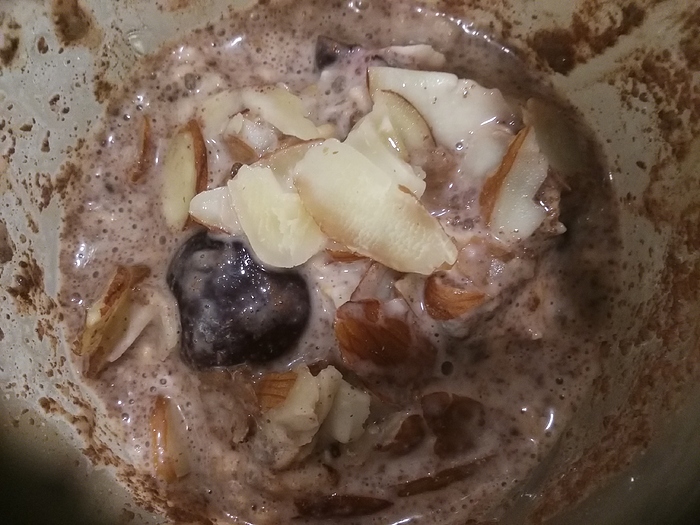 For lunch, I am asking for help comparing 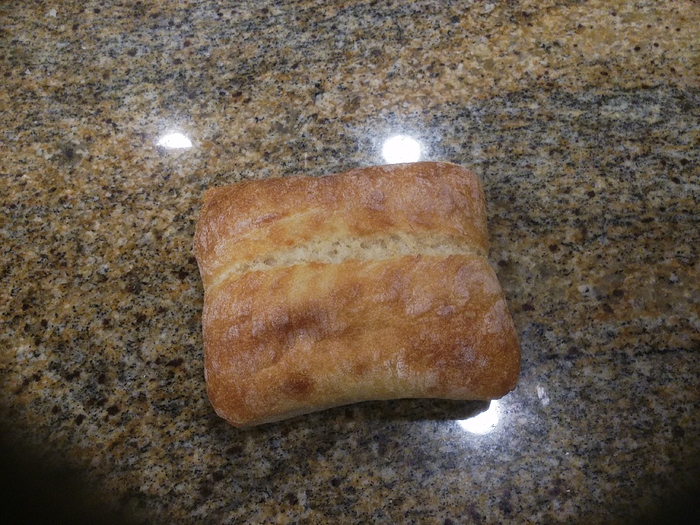 Costco "Torta rolls " (the picture says La Brea, and I’m not sure they are the same) vs “Costco Artisan hamburger rolls”. They don’t look like what I think of as hamburger rolls. 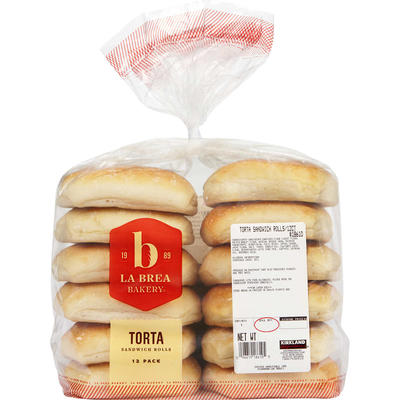 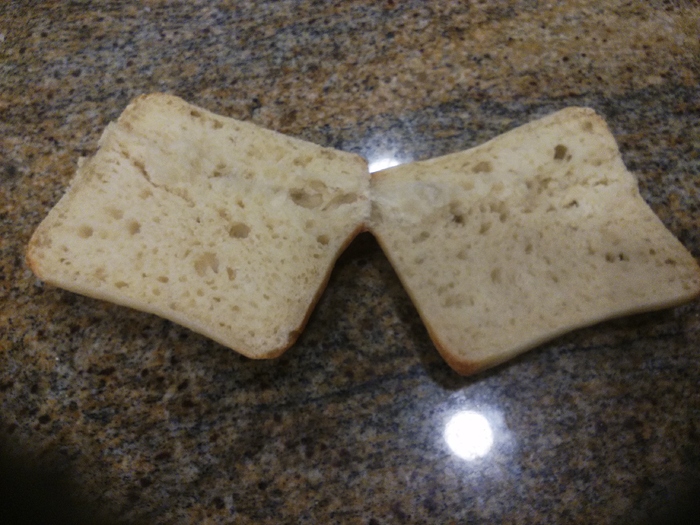 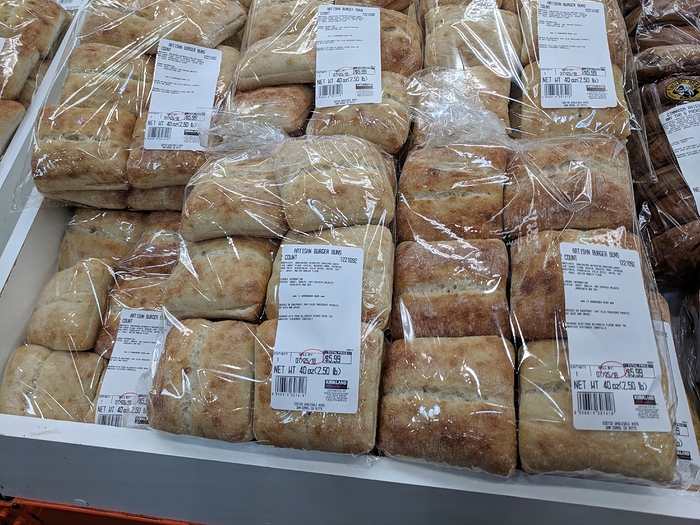 Hoping to include pictures of both, and use the ones they are calling “hamburger rolls” as a substitute for ciabatta. I am making sandwiches for 25,

I wanted sandwiches better than what I could buy locally.

I started off with a recipe for “muffulletas”, using homemade olive salad, local, but expensive meats, like mortadella and prosciutto, and local but expensive ciabatta. 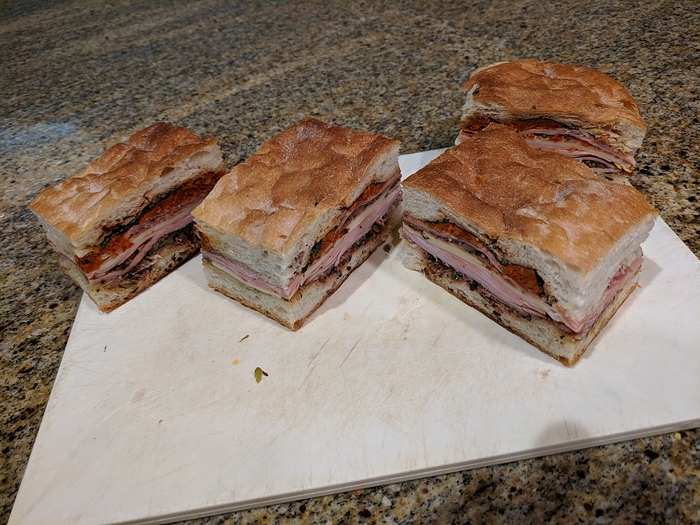 Then the hubs reminded me that I could buy sandwhiches for less money and no work.

Then found what they are calling “artisan hamburger rolls” at Costo. They look a lot like what I used to see labeled as torta bread?

Now I am thinking “pressed sandwiches” on these rolls, with a different expectation.

I see a few breads described for “tortas”. Could this be a marketing thing? Could this “hamburger roll” work for a generic “pressed” sandwich?

In my research I read that for muffelletta,. I wanted to use Italian, and not French bread, as it held up better. 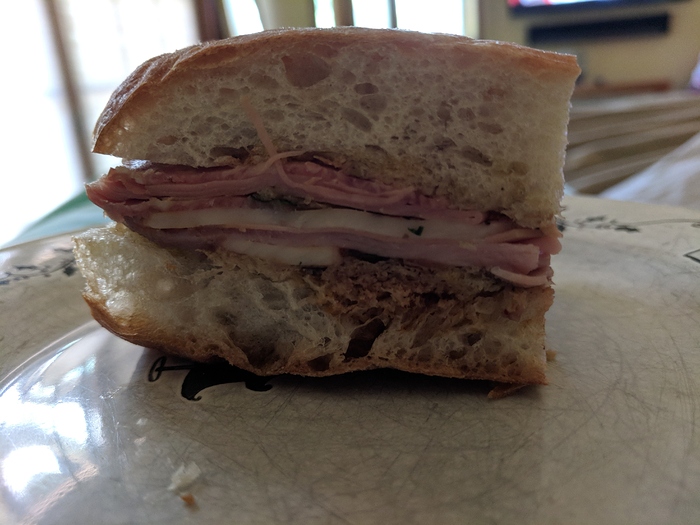 Main difference seemed to be Italian bread can have oil, while French cannot. And the shape might be different.

Pictures are out of order. Hope you can make sense of it.

Main point is, I need to make and press these sandwiches the day before, and serve maybe 16 hours later.

For the frittatas I wouldn’t worry, just leave in the liners to serve and have the romesco on the side for those who want it.
I would just do the vegan oatmeal in a mason jar to make and serve it for a more attractive presentation. Maybe a few of the cherries on the very top to make it pretty.
If you’re looking to make the sandwiches more economical a purchased olive salad will probably save some time and money.
Does your good bakery sell italian bread or french bread loaves? I think buying 2-3 of those would be a lot easier and faster to assemble the sandwiches than making a bunch of individual ones on those rolls. Also probably cheaper
(I’m not that familar with what costco has for breads to know what that fancy burger bun is)

Btw, if you’re making traditional romesco that’s vegan, so keep a bit aside to use on the vegan sandwich mixed with some semi-smashed chickpeas and veggies

That was so helpful! Thank you! The vegan sandwich is still a bit up in the air. Roasted veg right now would be amazing, but more work and uncertainty. Chickpeas would mean less suspense.

re the oatmeal: i make a baked oatmeal with coconut milk, cacao nibs and chopped pecans. that combination would also work well for an overnight oatmeal.

Thank you! I could easily sub pecans for almonds, and/or coconut milk for almond milk . Does your baked oatmeal recipe call for no eggs? I love the idea of baked oatmeal, but most recpes I’ve seen call for eggs.

preheat oven to 350-degrees. dry (or in 1 tablespoon coconut oil) toast 1 cup rolled oats, 3 tablespoons each cocoa nibs and chopped pecans (optional: add 1 tablespoon flax and chia seeds ground together) and put in a 8-inch cast iron skillet or baking pan. mix one can of coconut milk with a splash of vanilla and a pinch of salt. pour over oat mixture and bake @ 350-degrees for 30-40 minutes. fully cool before serving.

some notes:
i forgot to add the flax and chia seeds and the texture was fine.
i’ve often make this with various fruit and nut combinations (apple, pecan, cinnamon, nutmeg; plucots, almonds; raspberries, apricots, almonds) without the cocoa nibs, but the time i added cherries, their flavor didn’t really some through. they were frozen, which might have been the problen. but, i would layer the baked oatmeal with the roasted cherries.

Just double check the bread is vegan (usually is), add the romesco with the semi smashed chickpeas, some jarred roasted red pepper, maybe some cucumber slices and a few leaves. They will be totally thrilled!

I forgot to say the eight picture are sandwiches from the expensive stores “good Italian bread”. Actually it was called “pugliese” or something like that.

These are the price of their meats. Any sources for pricing this out per person? 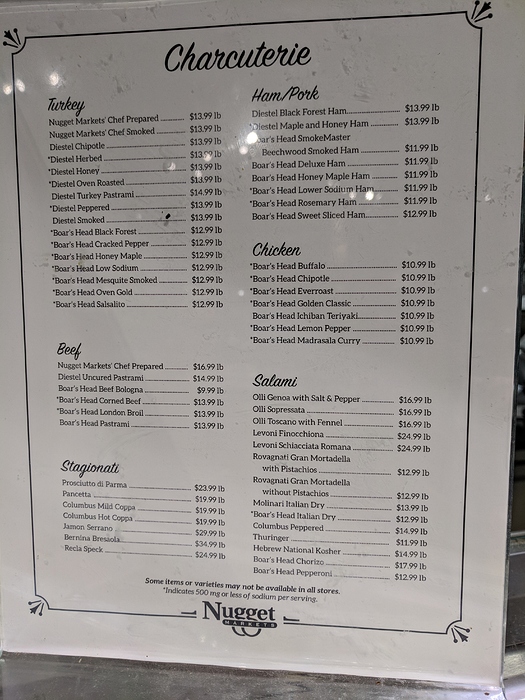 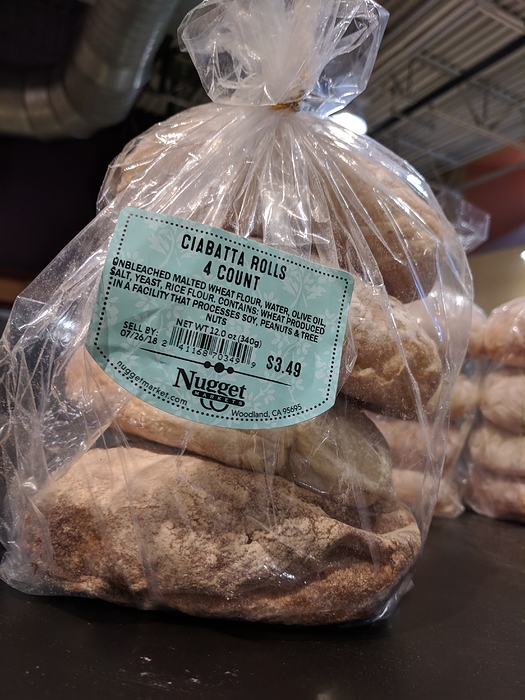 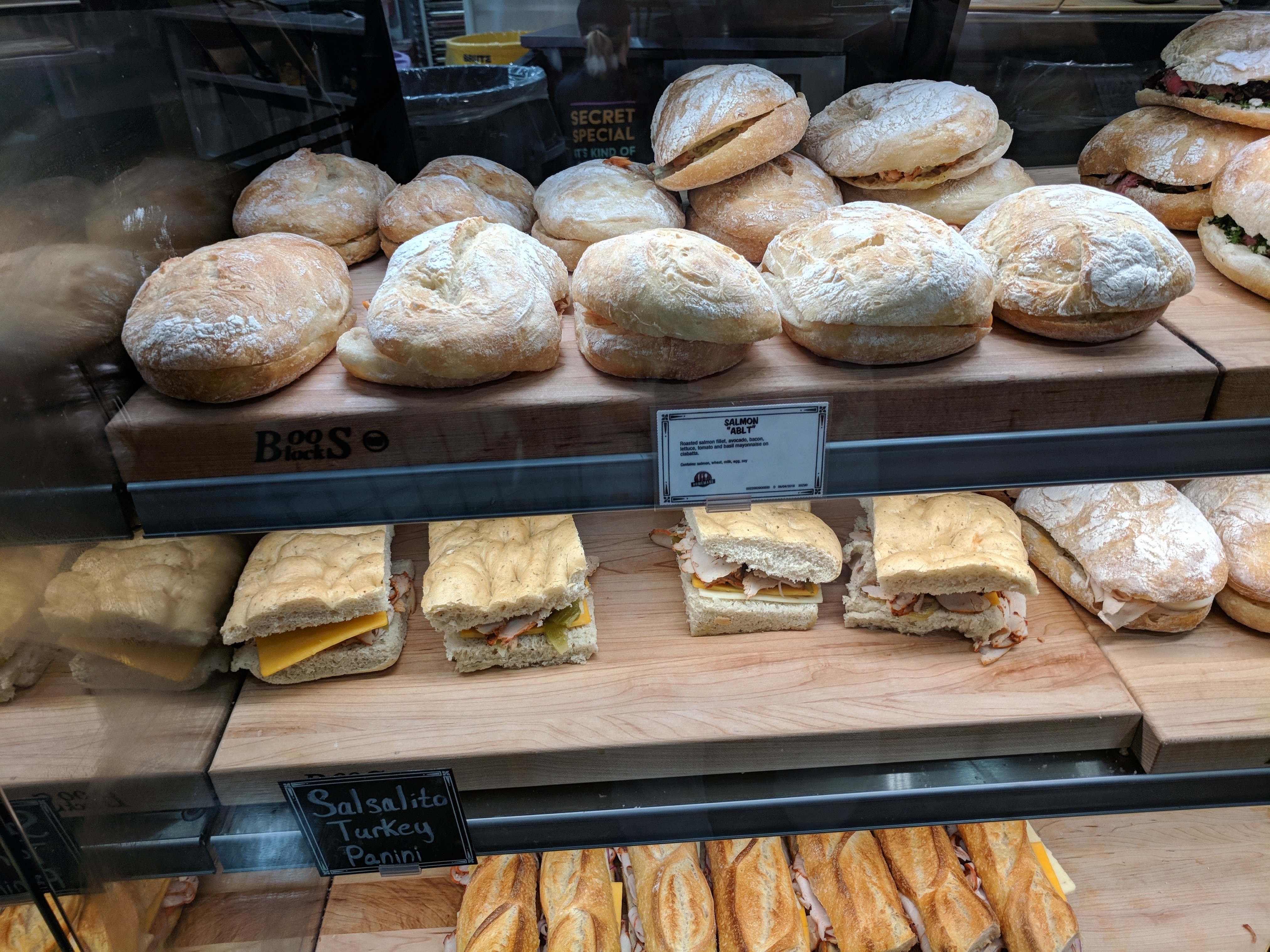 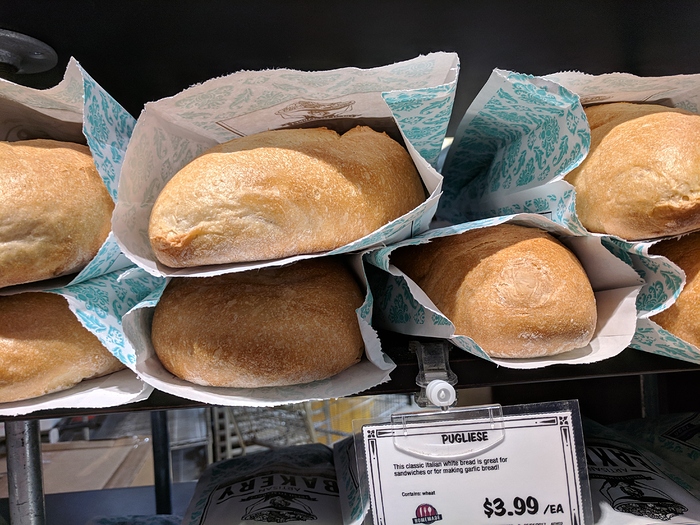 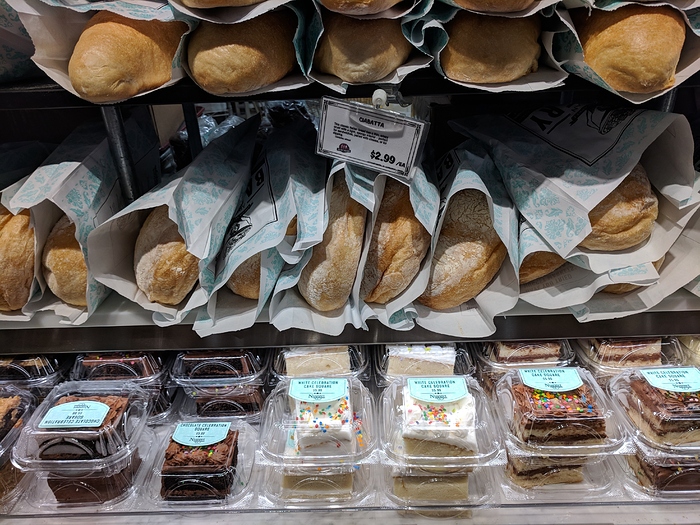 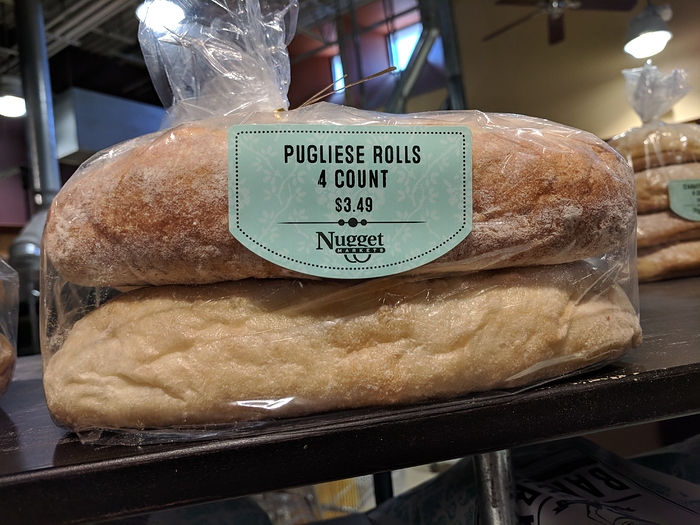 I just read 1 pound is 5-6 sandwiches

This one let’s you adjust the quantity

Im thinking one of the small ciabatta rolls for the vegan sandwich, then use the larger longer loaf of “pugliese” for the muffulettas.
If you have access to costco see what their prices are for the meats, and then I wouldn’t hesitate to add in roasted bell peppers and use two layers of the lesser priced meat you find. Recipes look like a big variation between 2-4oz per serving, maybe figure 3oz total meat and 1oz cheese per person.
Hmm, will pork be an issue for anyone…? Maybe do an extra 2/3 vegan sandwiches as an option for any last minute dietary concerns people

Funny you should mention it…
Costco meat; no “deli” but prepackaged. No mortadella. 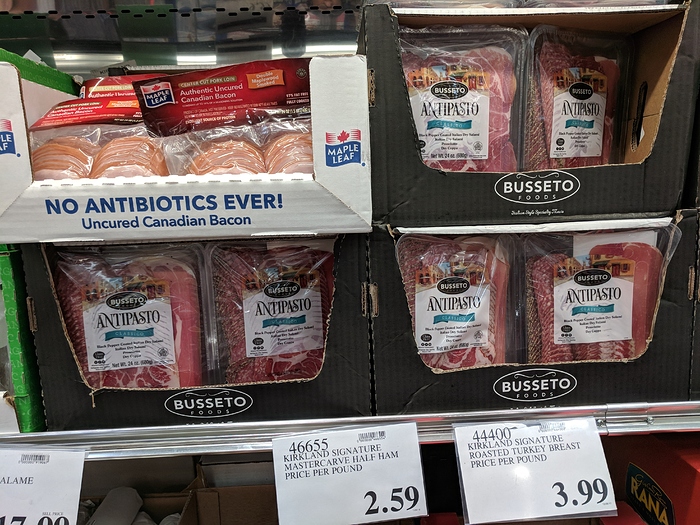 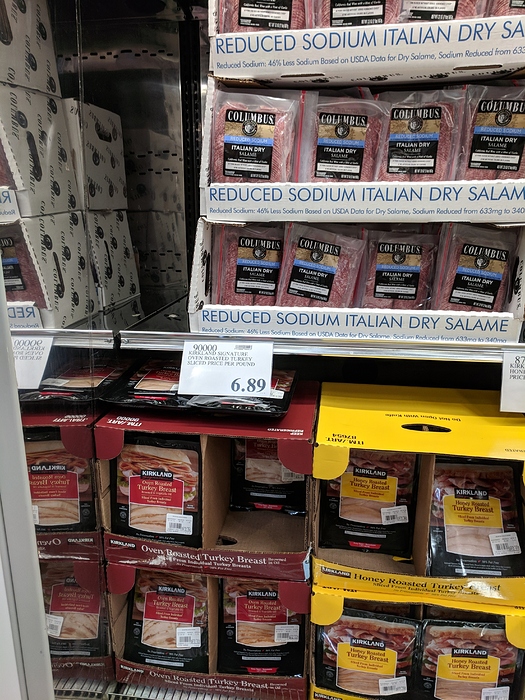 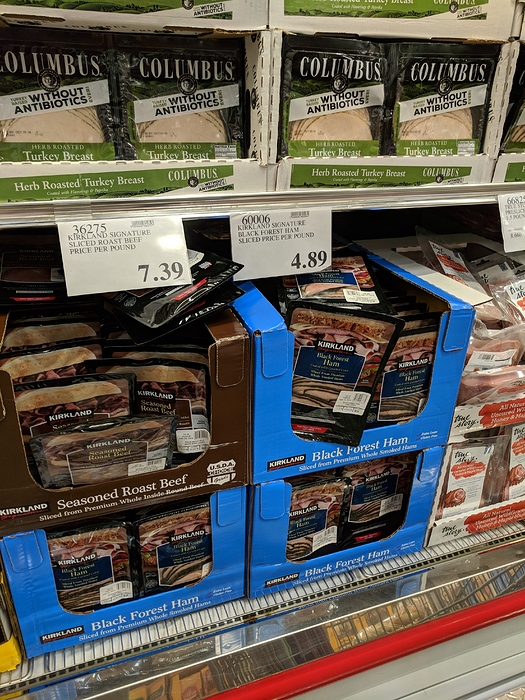 Here is the sandwich on the Costco bread 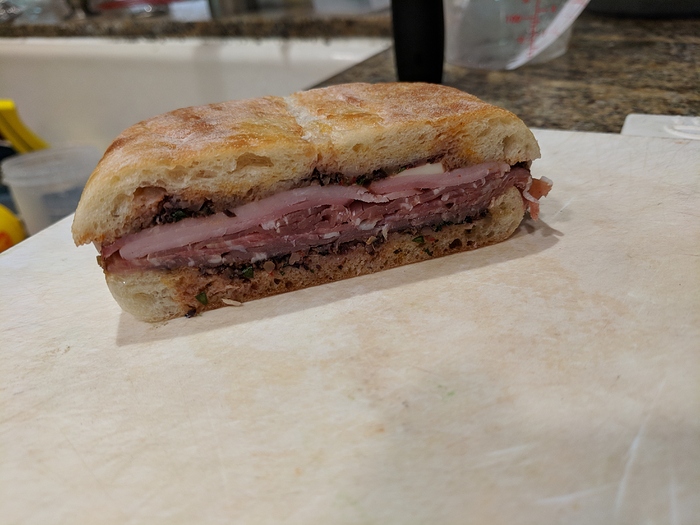 Ha! What’s in that “antipasto” assorted meats package? Im thinking that would be ideal just get 3 pgs for the 24 sandwiches and then the cheese which they must have somewhere.

Than sandwich looks good- although was the bottom soggy…? A layer of roasted bell pepper in there would be pretty.

The red pepper would look nice! The bottom was not soggy, although the olive salad had permeated it a bit. The size of the sandwich seemed more appropriate than the small ciabatta, which makes a pretty bog sandwich. A half of the small ciabatta sandwich would be about right, but might look funny if I was serving just a half.

I’m really not very knowledgeable about cured meats … would that assortment work? I can’t imagine anyone would disect the sandwich when served and object to using something different from the “authentic” muffuletta!
The rolls just seem like a much bigger PITA to make than using the loaves, and yes a half of a roll serving seems weird somehow, but a slice from a larger sandwich loaf-even if it’s the same size- seems less weird…

“I can’t imagine anyone would disect the sandwich when served and object to using something different from the “authentic” muffuletta!”

I can’t either… but that’s why I’m going with “pressed Italian sandwich”.

I watch the Food Network. Not my first rodeo!

Okay, actually it IS my first rodeo!.

And I do like the mortadella with pistachios…which my husband won’t even taste, because it’s “bologna”. Sigh.

Haha, well i vote you buy yourself a stash of the mortadella and don’t share!

A few years ago at Costco I bought a large (maybe 40 oz) jar of roasted vegetables in seasoned olive oil. Eggplant, artichoke, peppers onion, etc. I think it was an Italian or Greek brand.