De Buyer, Mauviel, Demeyere etc. make their pans in their own factory.

For carbon steel, De Buyer for sure. For example, All Clad definitely makes their triply stainless steel cookware in their own main facility. However, almost all the All Clad other appliances are branded under All Clad name, but made elsewhere. Lodge is a good example too. Lodge makes their own bare cast iron cookware. Their enameled cast iron cookware however is made with a partnership with a factory in China. Nothing wrong with China, but it isn’t even under Lodge. I think once you go outside of each of the company’s main line cookware… it is probably outsourced.

Thanks everyone. I kept hearing about Made In. Initially, I was confused by the name (I did not even know it is a cookware brand). After reading your responses, I was thinking about a stainless steel saute pan because I could use one. However, I like carbon steel cookware in general – even though I already have a DeBuyer. Anyway, I pull the trigger and purchased a 10" fry pan from Made In. I will let you know I like it or not. 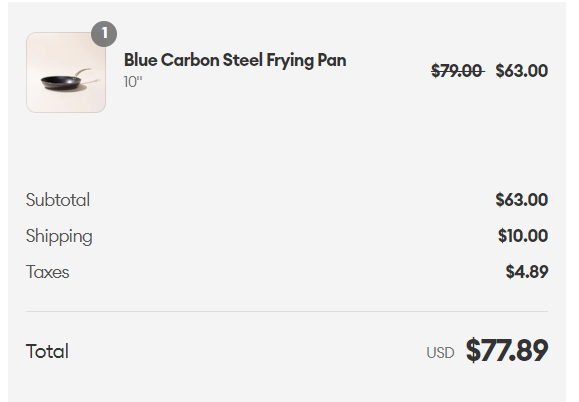 Please continue to discuss. I still do not fully understand their model.

Made in started out as an American startup from the Great Lakes midwest–like almost all American cookware companies. They did just OK according to reviews at that time: 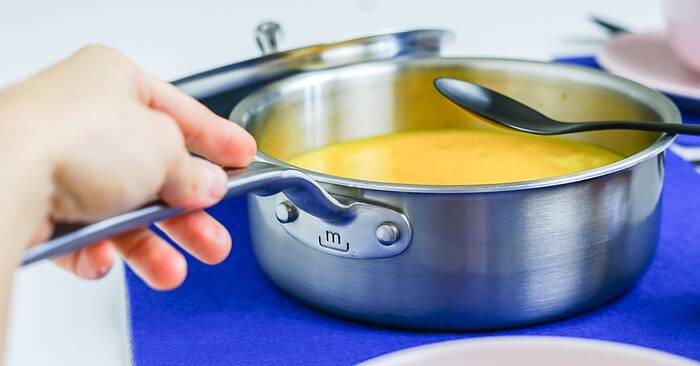 The cookware startup Made In promises US-made, premium-quality pans and pan sets at a discounted cost.

They apparently received an infusion of capital, moved to Texas, and became a completely different company–and they’re on the prowl.

I think once you go outside of each of the company’s main line cookware… it is probably outsourced.

But in the case of Made In cookware everything from them seem to be outsourced.

I try to stay true to cookware lines where I know the cookware is made in house in the factory.

But I’ve failed in the cases of my Demeyere Alu Pro non stick (which I think is made by Ballarini) and my Zwilling Pro frying pans (which I thought Demeyere made, but now I think it’s made in China)

I agree that the outsourcing by Made In is now so extreme that one doesn’t know what kind of company it is. Everything is OEM; nothing seems to be produced here in the USA.

There always has been a great deal of OEM manufacturing, but has often been hidden when that manufacturing is in China. What’s changed is that the manufacturing has become much more a partnership and not so secret–and Chinese often only supply parts of a product–like SS lids for All Clad.

If Made In exclusively relies on OEMs that exclude China–they would probably be the only one.

That’s why I’m kind of shying away. It’s a middle man company, it seems. Hard to beat Amazon in middlemansmenship. I didn’t even know they were done in Chicago. I’ll see what Heritage has to offer.

I got my inaccurate leanings from this, and a few others: https://ovenspot.com/stainless-steel-cookware-made-in-usa/#:~:text=Ever%20wondered%20what%20brands%20of,%2C%20and%20Made-In%20Cookware.

Sort of made me think that Made In might have foreign materials, but Made In the US. I’ll give Made In credit for their transparency, though.

Then when I read more, I learned the CS was French, as were the knives. That lead me to the US SS conclusion. Wrong again, I see. With Amazon, I just have a whole lot more choices; though the reviews on the pan ChemKin just bought are glowing. Not saying I wouldn’t buy any Made In; just would play the field and consider it as an option. CK payed a fair price for a fine pan. Hard to critique that.

I got the 3qt saucier a few years ago when it was, I believe, priced at $99. This was also before they started really expanding the company. The $99 price point was a big selling point for me - I wasn’t really aware of anything else with the same level of quality and US-made at that price point. I think the overall thickness of Made In’s stainless clad is a little thinner than All-Clad D5, but don’t quote me on that.

All that said, I enjoy the pan and use it frequently. I’ve always thought the pan design takes cues from Mauviel, but maybe that’s my own personal opinion. The handle is a flat, thin design which I don’t mind and like better than All-Clad’s handles.

I also own their 12" carbon steel skillet. I can’t comment too much on this as I rarely use it unfortunately for 2 reasons: I’m cooking dishes that aren’t appropriate in carbon steel and I sometimes can’t quite seem to get the hang of cooking on carbon steel. It’s my only carbon steel pan so I can’t compare it to others, but it’s well made. I’ve certainly cooked some nice meals in it though.

Back a few years ago, Made In filled a niche market - cheaper than All-Clad but with similar quality construction/performance and was generally US-made. I haven’t purchased anything from them for awhile now. I’m a little dismayed they’ve expanded the company so much, but maybe it’s not an issue. Their prices have also increased a decent amount, so I’m not sure if they still hit that bargain price point anymore.

I’m no expert though, so take it all with a grain of salt!

Thanks. I have used my Made In carbon steel frying pan for a week (pretty much at least once a day). So far, so good. I am going to follow up with a separate post I think.

I’m sure it’s a fine piece of cookware.

Let us hear your final thoughts once you’ve used it for a while.

Thus far I really like it. I have been using it 1-2 times per day. So give or take, I have used for 10 times. The pan is well made. The fit and finish are great. By no mean that it is better than DeBuyer in these areas. However, what I like most is its moderate weight. I can move, rotate and tilt the Made in pan with ease.
Thanks for your recommendation

I use the MadeIn pans pretty much daily. I know it is heresy in many parts…but with all of the great woks out there… Cen Brothers, Yamada… their wok is my daily driver too…I use the other ones I own as well, but only when I need a larger or smaller size. I am really happy that you like it. Taste in kitchen knives and cookware can be very subjective, so I am always happy when someone likes the same things i do…

Thanks Wabi.
As mentioned before, I like to do a quick review and includes a few photos of the 10" Made In carbon steel pan. I will compare to my 11 inch Debuyer Mineral B carbon steel pan.

In conclusion, the Made In carbon steel pan works out nicely for me. So far, so good. No warping. The one thing I appreciate the most is its moderate weight. The lighter weight makes it easy for me to toss foods in the pan, transfer foods out of it, and of course cleaning it. Thanks for all the discussions. 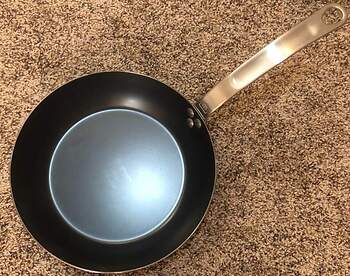 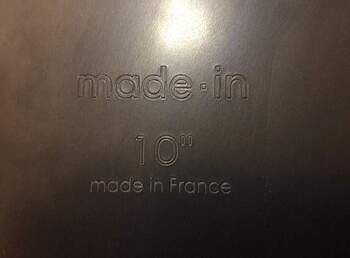 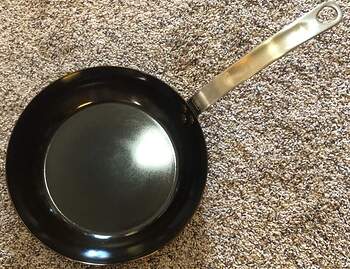 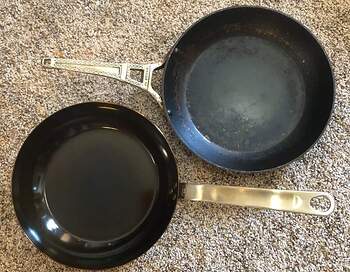 Measured thickness by a micrometer are closed to advertised 3 mm for DeBuyer vs 2 mm Made In. 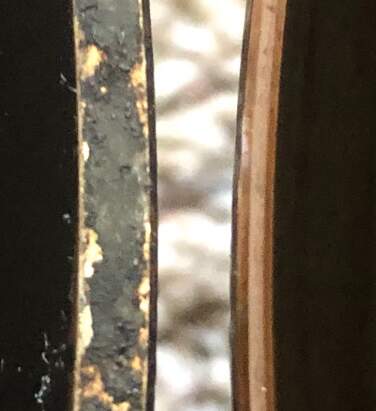 *Sorry that my deBuyer pan seasoning has chipped off a little, but the pan actually works.

Awesome sauce!
All kidding aside.
I just happened to sit down for my evening review of Hungry Onion when I saw your post.
When it comes to knives and cookware…to put it bluntly, I just like shit that works.
Buy once, cry once.
Buy good gear, and you dont have to worry about it later.
i have shoes that go back to the 1970s.
The MadeIn pans, the Cen Brother’s woks, the Takeda and Shibata knives…I wont have to replace…ever.
Unless stuff is really freakin cheap, like the Kiwi knives…I just want to buy them one time.
The MadeIn pans are a one time purchase.

I shudder to think what my shoes in the 70’s would look like today.

I live in Hawaii, so I spend most of my life in rubber slippers or Crocs…so YES…I do have several pairs of good shoes that are 70s vintage. I just have to bust them out now and again to put Lexol or some other leather treatment on them. I just wear them when I go to the mainland…the same goes for ties and sport coats.

How’s that for thread drift?

Nothing wrong with thread drift. Just curious, what kinds of shoes are they? I picture me in Chuck Taylors during the 70s. Con all-star.

I think I’m sticking with Mauviel M steel from here on out for my CS. Still, that’s a pretty pan. Made in where Mauviel’s made in.

Clark’s Wallabies. A Pair of Tony Lama boots, and a pair of Johnston and Murphy lace ups.

I don’t mind you two discuss about shoes, but I do not want to hear anything about size. None of that.
Get it?

Dang. I have a very hard to find size. Johnston and Murphy used to make it in women’s shoes,a long long time ago.