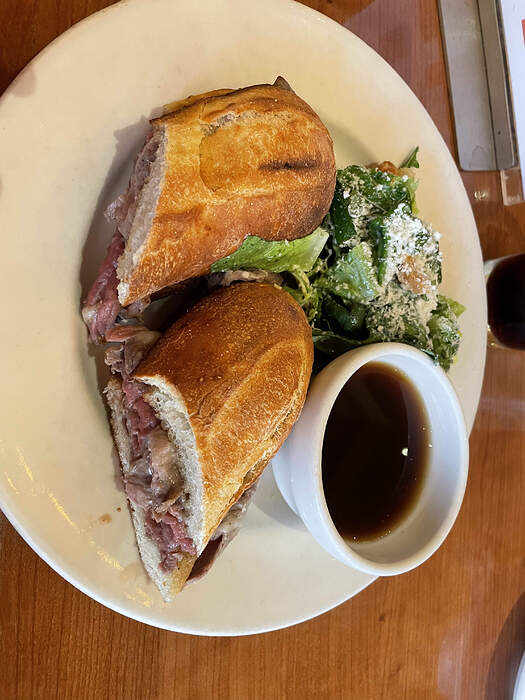 Brunch: toasted sesame bagel top w/a tiny bit of shmear, some of that velvety gravlax I made for a potluck yesterday, and a few drops of sweet mustard sauce 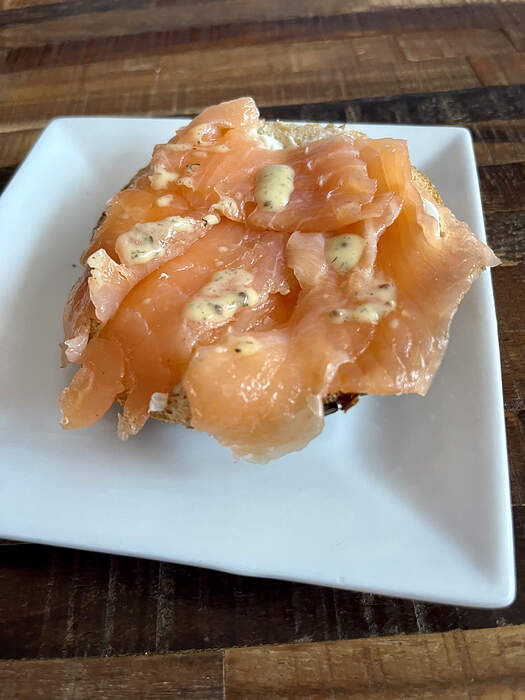 Lunch today was crespelle filled with Swiss chard, sausage, ricotta and Parmesan. Topped with a mornay sauce and a bit of tomato sauce, baked just until bubbling. I also substitute FM spinach for the chard…when I want a little grit in my life. Dessert was a slice of lemon cake with berries. 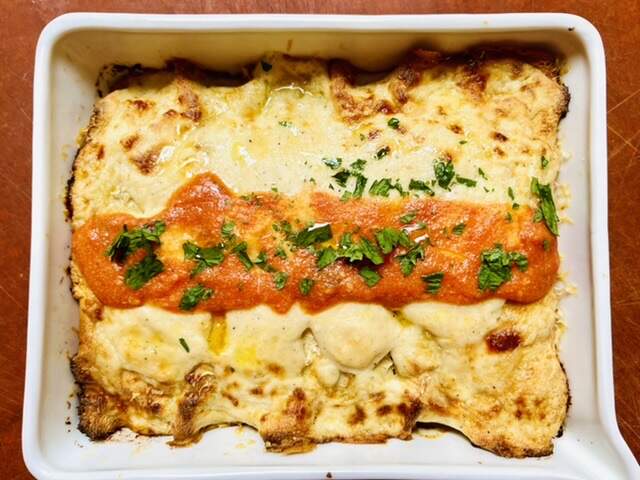 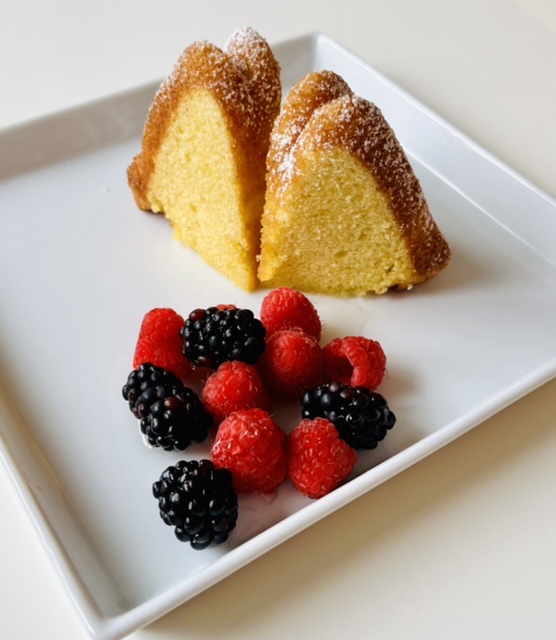 Whats in the summer rolls?

Because SOMEBODY startled me in the kitchen, I dropped the clams I bought at Union Square that I was going to eat raw for dinner. Four of them broke, so I steamed and chopped them and added them to some seafood broth I had leftover from the awesome Pronto Cafe on Ave H. With spinach and a poached egg. 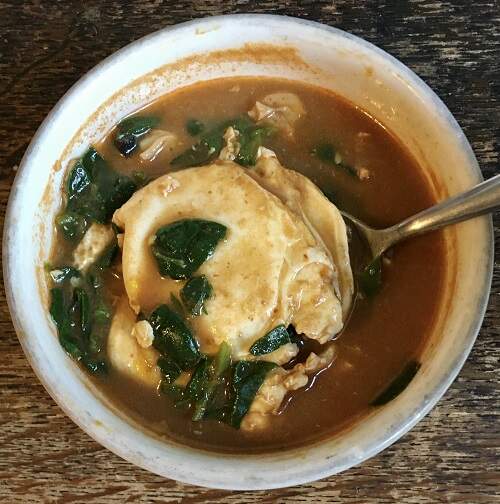 Lunch yesterday was crepes with sautéed pears, toasted walnuts and pear caramel sauce. I had planned on putting a dollop of sour cream but forgot! These are the same crepes as the crespelle upthread. I usually make a dozen as they hold well for a few days in the fridge, whole wheat pastry flour makes a light and more interesting taste than white flour. 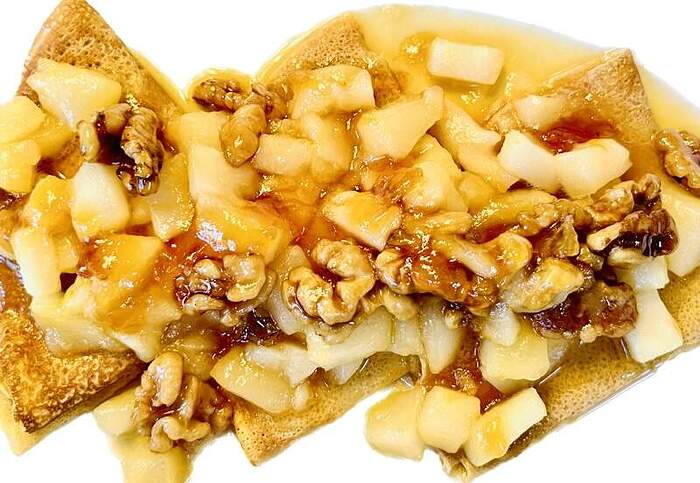 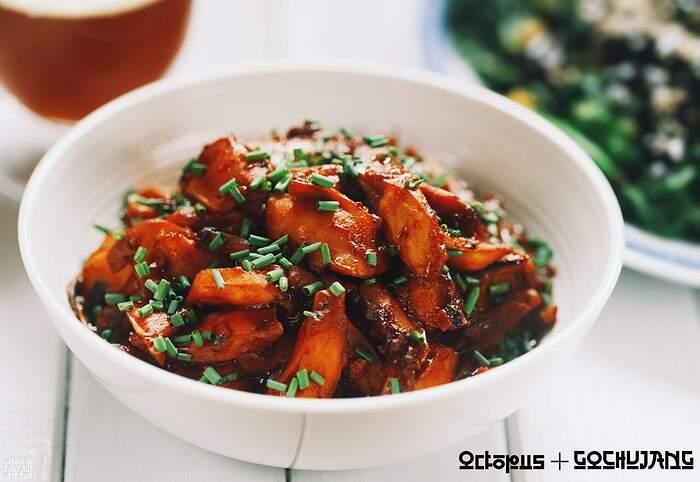 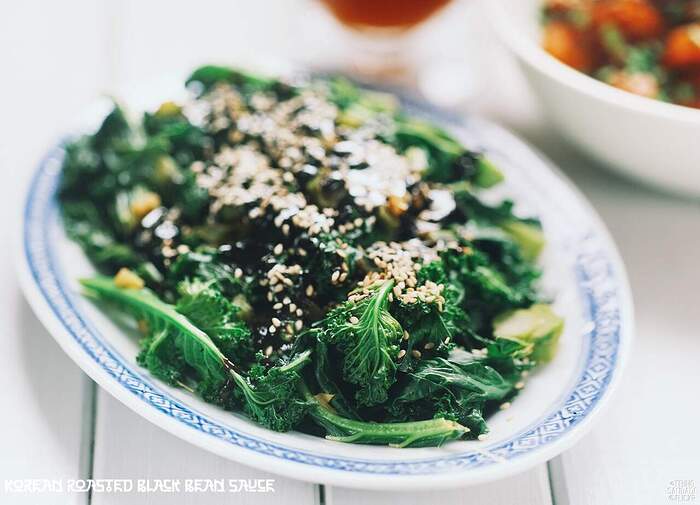 Already gone through half of the conservas brought back from Lanzarote. 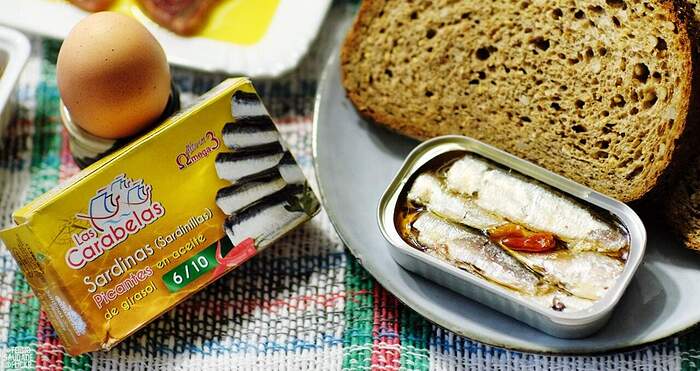 1280×680 134 KB
Salted tuna from Murcia, Spain. In Andalucia it’s served with almonds as part of tapas. At home I like to smear some tomato paste on bread and top it with oil-drenched mojama slices. 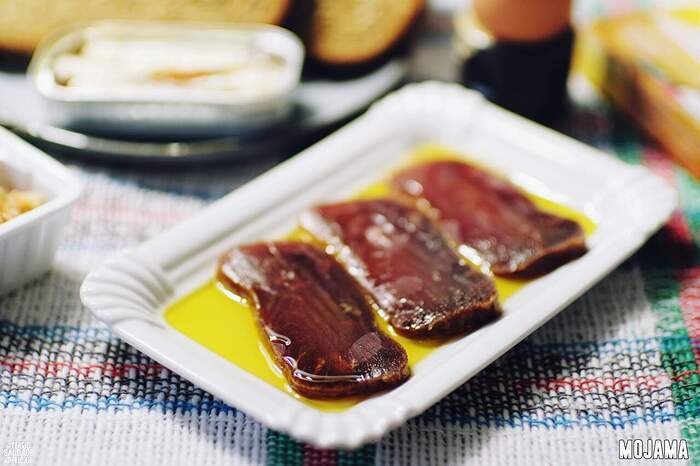 1280×954 125 KB
Ling was talking about peanut flavoured “flips” in another thread. Well, I found only 2 supermarkets that stock the peanut version, other supermarkets only have cheese flavoured flips. Will find Fun-Frisch Erdnussflips at Rewe when I go to Düsseldorf next week.

Can’t use chopsticks worth a damn but no problem with snacks as I can grip them. 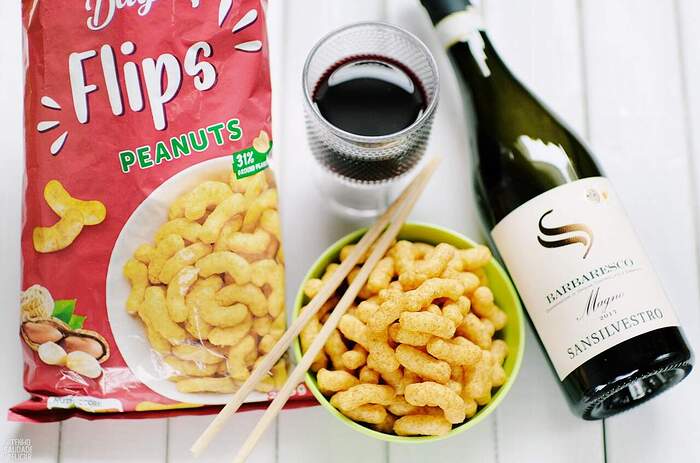 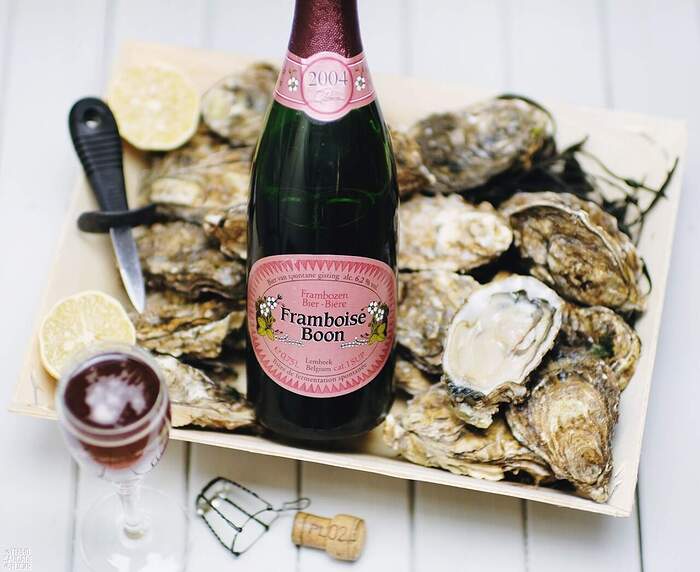 And lunch today was a tomato tart using scraps of dough from my tart doughs headed to the freezer for Tday. The bottom was brushed with tapenade , followed by some Halvarti, bacon and whole small tomatoes. It was topped with some freshly grated Parmesan when done. This baked in about 25 minutes as the scrap crust was pretty thin. Served with some greens with a mustardy vinaigrette. 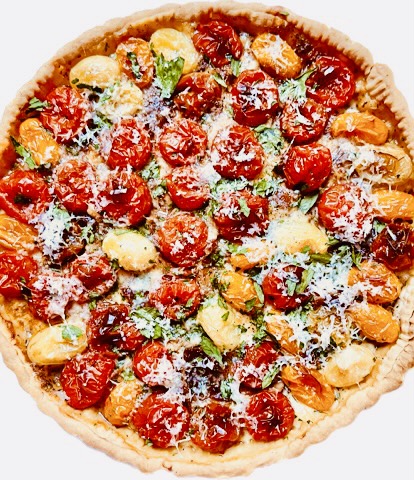 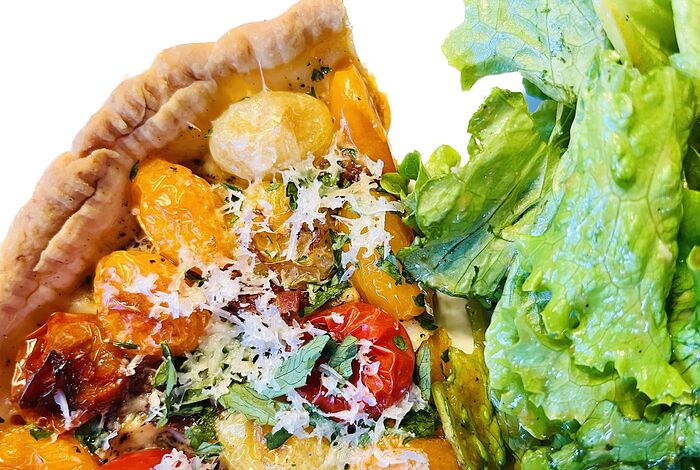 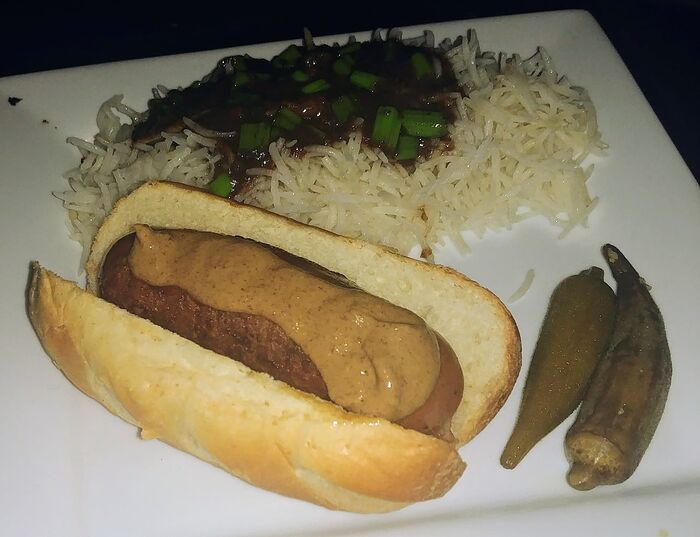 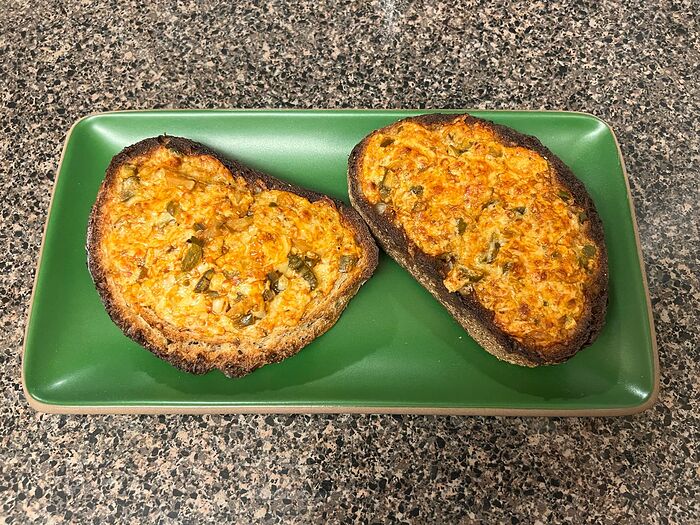 That’s my kind of toast! A sammich from DiBruno’s for the road: red pepper aioli, genoa salami, prosciutto cotto, soppressata, mild provolone, banana peppers, lettuce. Still half of it left for lunch tomorrow, and we split this between two! 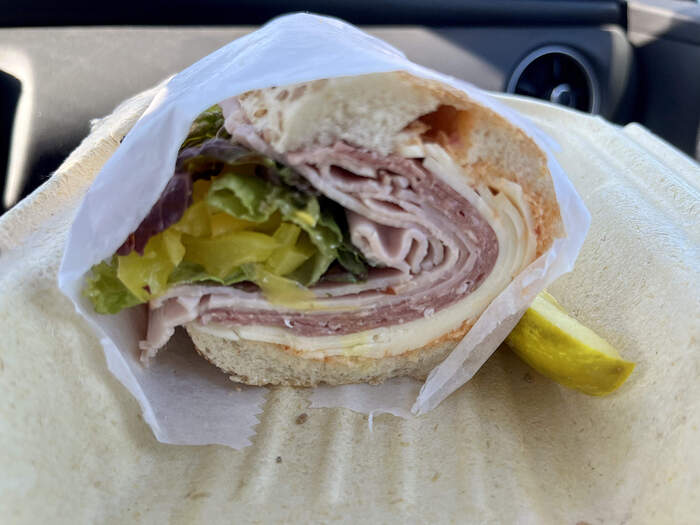 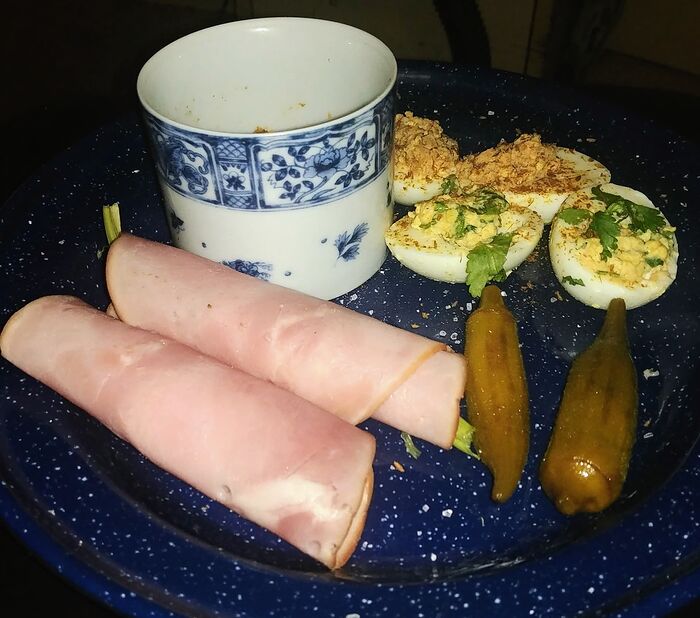 That sounds and looks divine.

! I make them frequently but with their own crusts, not just with trimmings!

And today…almost instant pizza. Adapted King Arthur’s Weeknight Neapolitan pizza for lunch but streamlined the directions “ a bit”. Mixed in processor and a 30 minute quick rise in the micro with a cup of boiling water alongside. From start to finish…65 minutes. Did the crust have the depth of flavor of a long rise or a sourdough? For sure no, but it certainly scratched my itch. I started at 11:30 and we sat down for lunch at 12:35. 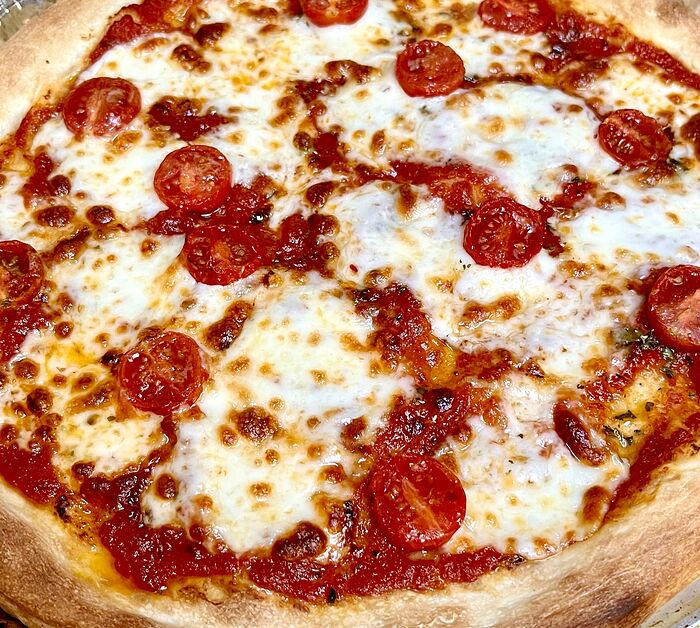 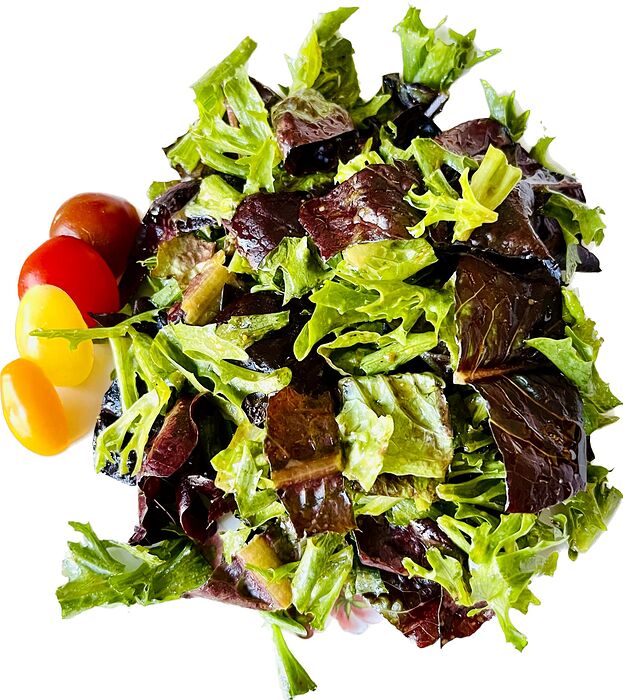 Some kind of weird “panini” with ground beef, cheese and peanut butter (??).

Fortunately had a beer on hand to wash down the first half. May/may not finish the rest later. 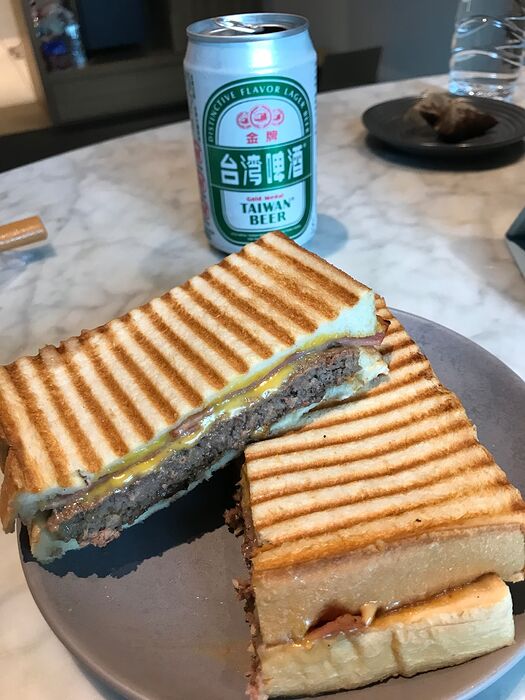 And lunch today…yellow cauliflower, sautéed onions, garlic, peperoncini,capers, oil cured black olives were the “fixins’ for the pasta. Freshly grated Parmesan topped it off.
I was gifted a bunch of green tomatoes from a friend’s garden and let them ripen. Salad was the tomatoes, red onion, fennel with a vinaigrette with balsamic glaze. 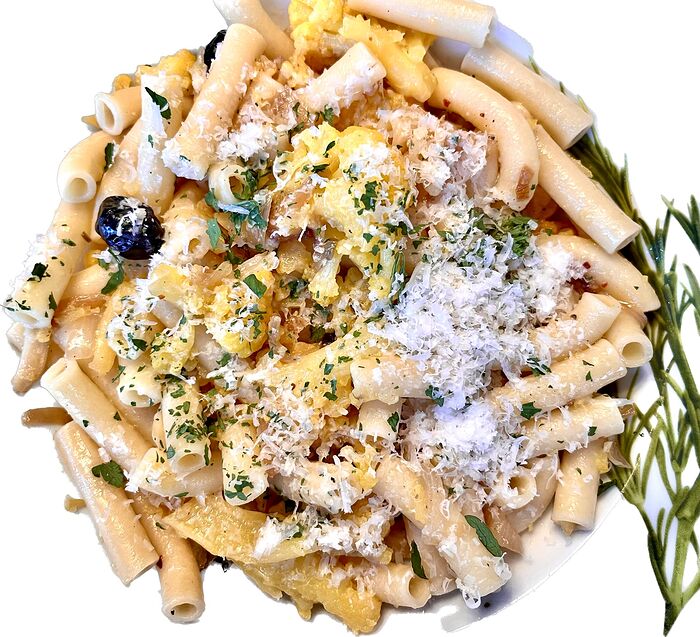