I am in No Cal, and they’re coming from the Central coast.
I like them raw, and will probably eat a dozen of each that way,but could use suggestions for how to extend my feast over several days. For example, last time I found it important to store them with the deep part down or they might be dry.

No problem. I will invite myself over to help you with the oysters.

Are they cheaper than let’s say, at Sun Fat in SF?

I am guessing you are trying to keep them moist. I think several days may be tough. I’d like to know if there’s a good way too. Last time I kept them in the fridge right side up overnight, but the batch on the second day was already noticeably drier than the ones eaten the same day.

But Kumamoto and Kusshi are so small that its easier to eat a bunch of them in a setting.

Thank you! I have not been to Sun Fat. I live closer to Napa, and eat them at Hog Island in the Oxbow Market at times, but I can never seem to get enough.

We have a local Asian market that has oysters, but I’m not sure I’m that adventurous. I buy their dungies and spot prawns. Last week they had live blue crabs! Does Sun Fat sell oysters with names🤨?

I don’t know if any East Bay shops sell oysters with that many varieties at such attractive prices. I think its worth a pilgrimage.

Photo from Yelp. From September 2018. Kusshi at $1.35 each. Kumamoto and Shigoku at $1.65 each. From clean circulating water tanks. 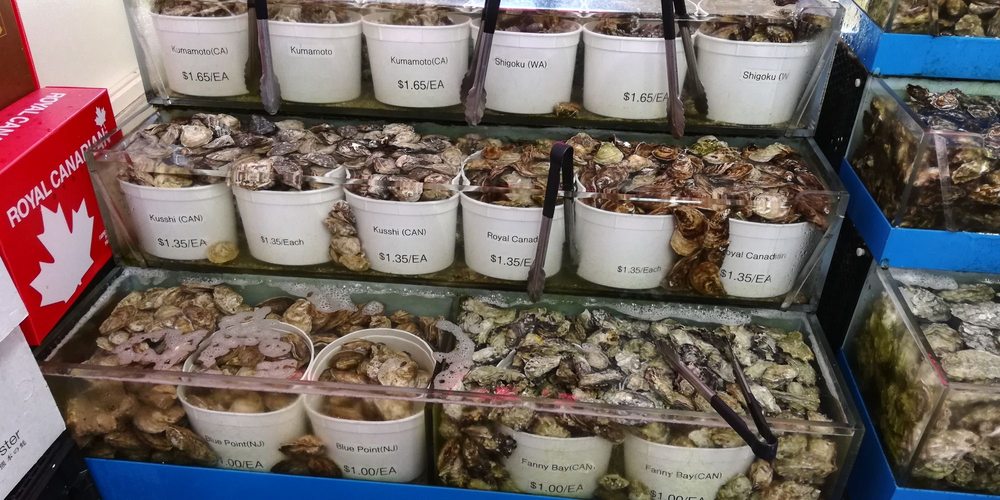 Wow! That is worth the trip! Thanks!

Keeping them in your cooler for any amount of time is really dependent on when they were harvested and how they were stored after harvest. Hopefully they were harvested within a week of your delivery and kept in a cold box. Don’t keep them in water, store them on ice in the fridge. As you said, cup down. They should last you at least three more days (total two weeks), by which time you have had ample time to devour! If you must cook them, make a CA original, Hangtown Fry.

Put some damp towels on the oyster so they won’t dry out in the fridge. Our oyster seasons is winter, we usually leave them outdoors. The rest of the year, we buy and eat everything instantly.

Are they delivered in a fridge truck?

Interesting you should mention seasons; I’ve been reading about that, given the fact that May doesn’t have an “R” in it. Apparently many oysters are available year round in the US now, because they are farmed.

Oysters, Despite What You’ve Heard…

Is any of that happening where you are? I had the best Oysters ever in France. Can’t remember what city, but here are some clues. 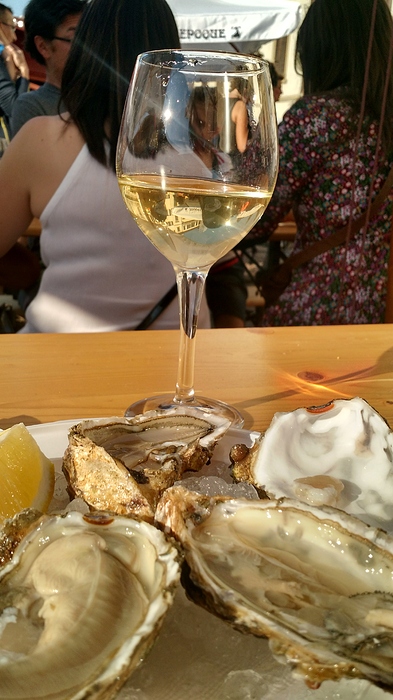 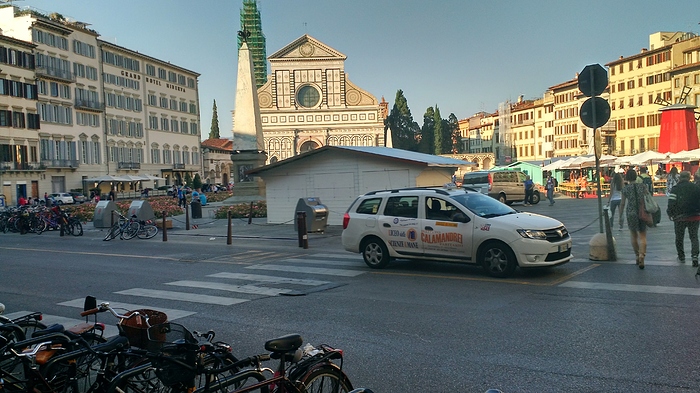 I don’t know about the truck, but they are usually delivered in a cooler with lots of those cool packs.

Also, it’s been exceptionally cool and wet here this May.

ETA Oops! Looks like that was Florence, Italy. For some reason it felt like France. I believe there was a “Bell Epoque” festival going on. I’m pretty sure the Oysters had a French name. Maybe Fine de Claire.

The only oysters I don’t eat raw in the summer are Gulf Coast oysters, where the waters get so hot that vibrio develops. I hope that is correct, I love east and west coast oysters, they are so different from Gulf Coast oysters, though both have their attractive features. One feature that was always so attractive about the Gulf Coast oysters was the price. Just a few years ago, it wasn’t unusual to get them at a restaurant for $6/doz. Not anymore, they start at about $12/doz thanks to an effort to characterize and name them, which changed only the price.

I noticed the difference as well! I remember visiting New Orleans several years ago, and seeing so e crazy low price for oysters, and wondering “what is up with THAT”? I don’t recall the details, but it was a very different thing.

OTOH, I’ve read things have changed with gulf oysters as well. Was it only the price?

About the shipping, which is done overnight, UPS;

Where do we ship? We ship anywhere in the United States including Alaska and Hawaii. We ship your order overnight via UPS in California and FedEx for outside of California.

Free Shipping? Yes! Orders Over $300 ship for free with coupon code: SHIP4FREE
How is my order shipped?

In most cases, your seafood will be vacuum sealed in one pound packages so if your order was 5 pounds of Salmon fillet; you would receive (5) one pound packages unless you specify otherwise. Your seafood then goes into one of our custom size styrofoam boxes with a sufficient amount of frozen gel packs (or dry ice if added to the cart). This box is then put into a corrugated cardboard box.

Products received will be partially thawed but kept cold enough from the frozen gel packs to be refrozen if desired.

If you have ordered a frozen product that you would like to remain frozen upon arrival, please add dry ice to your cart.

Our shipping team will add a divider inside the styrofoam box to any order that has fresh and frozen product to keep the fresh seafood and the frozen seafood separated.

Your order will be packaged to withstand a 2-day transit even though we will ship overnight to ensure you receive the freshest products.

it only the price?

I’ve been veg for decades, and for years i would eat seafood about once a year. And that was always oysters. I vote you eat them all raw. Practice perfecting your mignonette to help out any that are slightly dry the next day.

ETA; I looked it up, and it’s just 3 ingredients! I’m going to need something else to obsess about.

Can’t remember what city, but here are some clues.

Your pictures were taken in Florence, with Grand Minerva Hotel in the background.

We can find Fine de Claire easily. I liked those from Île-de-Ré and Cancale.
I read that the best temperature to store oysters is between 8ºC-10ºC (46ºF-50ºC) , put something heavy on them to prevent them from opening and drying up.

@bcc is an amateur of oysters, he ate dozens whenever he stayed in Paris each year.

And he hopes to eat dozens more this year.

Ha! Which are your favourite oysters world wide or French?

I believe there was a “Bell Epoque” festival going on.

Belle Époque Festival, don’t know this one, I googled and only find a film with the same name in Cannes Film Festival this year.

I guess it was a local thing.

I like to eat them raw. I don’t like when they are cooked and especially in gratin. Not a big fan of the dried ones. The only cooking version I like are the small ones in Asian omelette, they are great!

I like almost all of them. In the US I like the Wellfleet oysters from Cape Cod. I’m not wild about the mild tasting oysters from the west coast, and it’s been years since I had them in New Orleans.

In France I like them all. The best oysters in Paris may be the huitres sauvages that Pleine Mer sometimes has on Tuesdays. The best I had last year were at Le Vent d’Armor.