Another fun meal, but with a full room, group conversation across / around the table seemed harder than usual.

My favorite dish of the night was new to me (which is always a fun benefit of these types of dinners) – the razor clams. They were sauteed simply with aromatics, but fresh and delicious.

The duck was good, though I prefer pancakes to buns in general (and the buns came packed with cucumber, which I don’t eat, so there was that). To me this duck was on par with what we ate at Jiang Nan, but having partaken a couple of times now, I’m just as happy with the take-home half ducks at the prepared food places nearby.

I enjoyed the anchovies a lot more than others did, apparently – they were well-fried and seasoned (though I could have used more spice), as also the snow pea leaves, which I thought were as good as last time.

There was too much similarly-prepared fried stuff on the table IMO. I found the grouper and the shrimp both over-battered (though fresh and well-fried). And everything was short of heat: usually the salt & pepper-style stuff has more hot stuff in the topping mix, both fresh and in the form sichuan peppercorns.

The seafood casserole was probably my least favorite – the sauce had congealed by the time it got to the table, and the seafood was overcooked to my taste. It was tied with the fried rice, which was flavorless.

Agree with @SteveR about the pork served cold – we had the same reaction last time, so I was surprised to see it on the table again.

I enjoy their wontons, but the broth is weak, so I’m curious if the appetizer version is chilli oil-style or something else.

Two things I missed from our last meal at Wu’s – the oysters with ginger and scallion and the scallion sauce chicken; both were more flavorful than everything on the table last night except the razor clams.

Another time I’d also like to try more meat options, as we’ve done a pretty thorough review of seafood between the two meals (for eg @vinouspleasure ate different stuff when he went back).

II guess I ate all the suckling pig! It was delicious with a great texture but better warm for sure! Duck was good, liked the buns. No cucumber, just scallion in mine tho. The razor clams were the star, flavorwise, loads of flavor. the greens not eggy enough - I have had better versions. Too much fried stuff, the grouper the best of the lot. I think I said at the table that tho the dishes contained fried seasonings - green chiles, ginger, garlic - but the flavor did not make it into the fried items themselves - I think the cornstarch coating is too predominant and seasoning more timid than the best versions of these dishes. Liked the wontons, the broth was pleasant but no more. Seafood casserole meh, though all the seafood was of good quality. Having said all of this, I think this is a good restaurant and we enjoyed the meal and of course the company! Will be there again and try some other dishes - we saw some lovely meat and seafood go by.

I loved the razor clams, the salt baked anchovies {which were a salt delivery system}, the suckling pig but I agree that it being served cold was odd. It was actually cooler than room temperature. The pea shoots were good and I found a lot of egg at the bottom of the bowl. The broth on it was outstanding. I liked the seafood casserole a lot more than others, it seems. I found the shrimp tasty but overly breaded. And yes, all the food could have been spiced up a little. On the other hand, the ingredients were really good. I loved the wontons but the soup itself was bland.

We seem to be going out with htis group more than any other, even though we ahve to travel from Baltimore to join in {well we might be traveling to see shows but the groups meals have been a really fun think. We have 2 more trips already planned and hope to arrange more.

thats great, look forward to seeing you and Kay again!

several years ago I read that chinatown restaurants were being cited by the health dept for hanging roast meat. It presented a conundrum for the restaurants which had a long tradition of presenting and storing meat in this fashion. perhaps wu’s response is to throw the meat into a refrigerator.

It’s interesting this photo didnt convince y’all to order the garlic chicken showered with fried shallots. It’s definitely
top five on our “when we’re back in nyc” list.

anyhow, sorry to have missed it, looking forward to the next group meal! 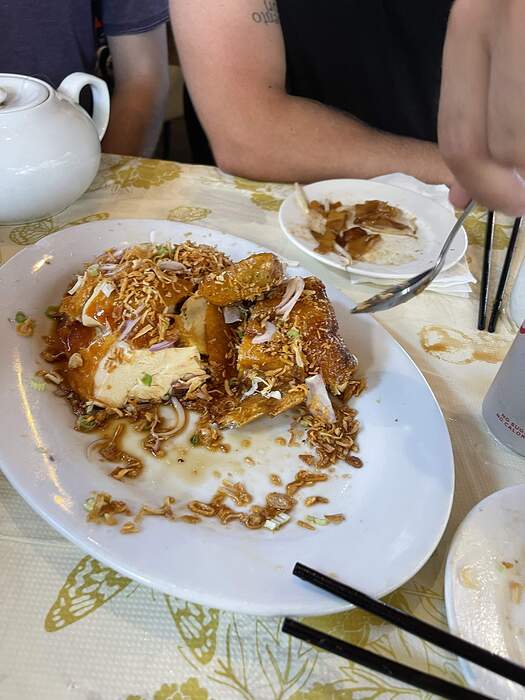 several years ago I read that chinatown restaurants were being cited by the health dept for hanging roast meat.

While this makes sense, the roast duck was served at a warmer temperature.

From my many meals there, I believe that the ducks hanging in the window (alongside the chickens & meats) are not those used for the Peking Duck dish. When I’ve been there at times that they weren’t as slammed as the other night, they did the more “traditional” presentation of the whole duck to the table, then carved slices for the buns & then left a plate with the remaining breast meat, the legs, and skin. We once asked them to leave the carcass for take out (the friends we were with wanted to make soup & side dishes at home) and they did, albeit with slight attitude/disbelief.