Help me sharpen this knife

Short story: See that knife in the pics below, tell me how to sharpen it and I will do what you say.

I’ve read many threads here and on Chowhound, as well as reviews for far too many sharpeners on Amazon. A dizzying array of options are available. I want to just start simple, learn to sharpen this one knife and go from there. It doesn’t have to be samurai sharp, I don’t use it for sushi or anything like that. Right now, the honing stick I have isn’t doing much. It’s been a year since it was last professionally sharpened. I want to learn to sharpen at home so I can do it whenever I want.

Just say, “Do XYZ”, I will pick one suggested method and try it. If it doesn’t work, I will pick another method. I am not afraid of ruining the knife or failing at a certain method. I won’t get upset that a suggestion was a waste of money.

Here is the knife. The box read “Carbon Steel” when I purchased it over 10 years ago. The words “No Stain” are written on the knife, however, which always made me suspect it was stainless steel. It has no rust even though I never wipe it dry after cleaning. It holds an edge very well.

Here are some options available to me locally. Amazon is fine, too. 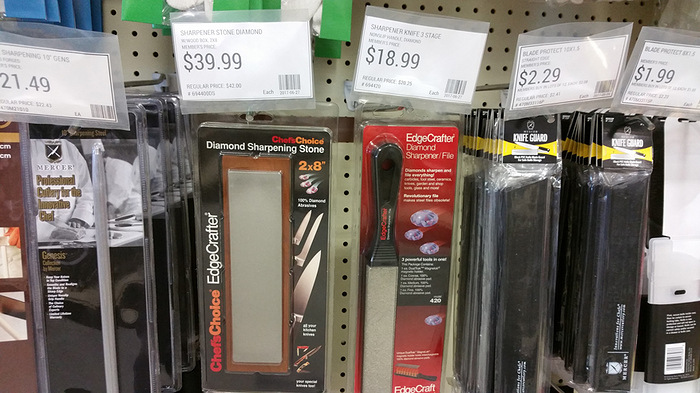 I get my knives sharpened at the knife sharpening booth at my farmers market, $6 per knife. Worth it to me.

… tell me how to sharpen it and I will do what you say.

Boy, you’re a masochist, aren’t you?

The biggest question is, “How much trouble do you want to go to?”

The easiest solution for that (and similar) knives is this Chef’s Choice “Asian” pull-thru sharpener. I have a couple of friends who use this model and they both like it. Get it from Bed Bath & Beyond and use their 20%-off coupon. The problem is, it doesn’t teach you how to sharpen. If you want to learn how to free-hand sharpen, you’ll need a sharpening stone.

For this type of softer stainless steel knife, I like using my Spyderco “Medium” Ceramic Bench Stone. It’s a bit more expensive, but being made from fired ceramic means it’ll last (literally) forever. I continually splash it with water while I use it.

A third option would be a medium-grit Japanese waterstone, like this one. It will sharpen a tiny bit faster than the Spyderco Ceramic, but it’s soft and will wear down, requiring occasional re-flattening. It also requires a bit of pre-soaking in water before you use it, and continual splashing while sharpening.

Simplest can mean different things for different people.
I guess Bookwich is correct that dropping your knives off to a professional sharpener is simplest in the sense that you are off-loading the sharpening task to another person. It is really his problem once you dropped your knives off. On the other hand, it is also not the easiest because you need to find such a person and you need to physical go there, and often time not the cheapest.

In term of convenience, then Eiron is correct. Get a pull through sharpener, and you can use it with no learning curve and you can sharpen your knife anytime and anywhere you like. Heck, you can sharpen your knife in the middle of the night sitting on a toilet seat. However, such sharpeners probably cannot yield the best edge, but you know that already.

On a fundamental and mechanical perspective, the simplest method is to use a sharpening stone. Nothing is more simple than just your knife and a piece of stone. However, it does get some use to it. I will say that it will take you about 2-3 sessions to get over the first anxiety, and maybe 10 sessions to feel comfortable.

That knife’s a mess. Really abused. I suggest taking a couple of hour knife work shop at a local culinary school or chef supply store. That way you can learn basic and advanced knife skills, plus basic and advanced sharpening. Learning how to sharpen a knife, but not how to use or treat it properly, would be counter productive.

That knife’s a mess.

It does look a little abuse, but I wonder if it is a misuse of the honing stick.

“Right now, the honing stick I have isn’t doing much.”

I got this Apex water stone kit a couple of years ago for Christmas - there is a bit of a learning curve, but the set up takes out some of the guesswork you have with a stone alone. Thus far I have been very pleased with the edges I have been able to obtain on my Wusthof knives with these stones.

The Apex Model Edge Pro is a patented system that will sharpen any size or shape blade (up to 3 ½" wide), including serrated knives. Knives can be sharpened at exactly the same angle every time, makin ...

Appreciate the responses. I will respond in detail when I get home. It was my first real knife, so some abuse happened along the way. Always speak freely, I check my feelings at the door when it comes to food (family rule, we are brutally honest.) I hone frequently, but when honing isn’t helping any more, I take that to mean it’s time to sharpen (probably a wrong assumption I know.) Most of what you see is actually grinding by professional sharpeners. They always change the knife shape slightly. Takes me a week or two to relearn. One pro sharpener is good, but charges $10/knife. But even if she charged $1, knife sharpening has been on my to-learn list for years. Food is a fun, yet serious hobby for me. I enjoy the anxiety and confusion.

I learned how to sharpen on plane blades & such because I am a woodworker & a cook. However you wind up sharpening - once you do it & understand it then you can sharpen anything & that’s a valuable skill to have.

Yeah, those definitely look like grind marks, and they also indicate that your knife sharpener(s) seem a little aggressive. Anyway, I am not 100% sure, but it may be time for a new knife too. The grind mark is starting to hit your indentation. Yes, your knife is a stainless steel knife, not a carbon steel knife.

I own more knife sharpeners than I own knives, now is use only one. I went for easy and sharp. 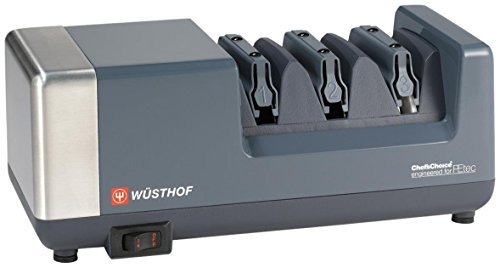 This sharpener has three stages. Stage 1 is sharpening, stage 2 is honing and stage 3 is stropping/polishing the edge.

I have knives that I have used for more than 20 years which I can easily maintain with occasional touch-up, honing, and stropping as others have described, but this knife doesn’t seem to be like them.

I think you should start developing your knife maintenance skills with a new knife.

Just looking at your photos tells you how the edges have been treated. Someone has been more aggressive on one side of the knife than the other. (the photo where the knife point faces to the right. That could be polished out. Normally you don’t remove steel that far up the edge unless you need to thin down the blade before sharpening. It looks like a belt sander was taken to it with a course grade. Or if it was sharpened from one side. None the less, none of that matters if it wasn’t over heated. The notches or scallops or kullens or indentations don’t matter either. Because they don’t usually go deeper than the center of the blade. Speaking of the center, look down from the back of the blade and try to notice if the edge is centered in the middle of the blade. If you just want an edge on it you’ll likely want 2 stones maybe a 600 and a 1200 grit. Ceramic or DMT diamond or waterstones. Mark the edge with a black Sharpie (magic marker) and put some painters tape on the blade above the edge if you care about scratches, and then watch a video. Richard Blaine does a good job explaining the procedure. https://www.youtube.com/watch?v=zyLif-chWe0

As a retired chef I have accumulated about a million knives, expensive ones, cheap ones and everything in between. I’ve used oil and water stones, an Edge Pro and taken them to professionals. I now use a Chef’s Choice electric dual angle sharpener similar to the one linked below and a pull through sharpener to touch up between sharpenings. My “system” does a good, not great job which is acceptable to me. YMMV 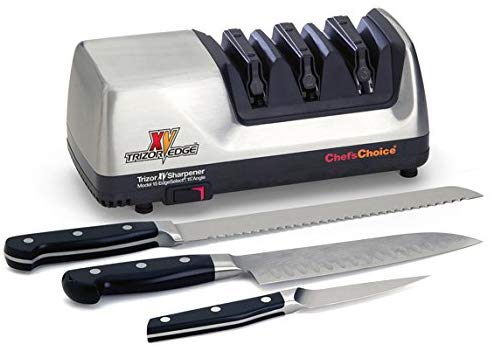 I agree with Zacky.
I have a set of Cutco knives, a set of those knives on sale at Costco ( different colors to identify what they are for), a chinese cleaver, and my son has a moderately expensive fish filleing knife. I have 2 kinds of stones, one is rather large in the utility room, I think is a japanese wet stone as it spans the utility sink where m husband used to sharpen the knives. In one kitchen drawer with the knives, there is another smaller stone, several honing rods of different colors. I do send my Cutco knives out for free lifetime sharpening with replacement of the blade of my scissors when needed. However, my son just told me two weeks ago that he would like to buy a chef’s choice electric trizor XV knife sharpener. As a Chinese NY gift, I purchased one which arrived a few days ago from Cutlery and Knife ( cheapest site). It can sharpen all kinds of knives including my cleaver ( if I can find it). He was very pleased with it I chose the black colored one which I leave on my countertop. It does not stand out and so, I am pleased as well.

I do send my Cutco knives out for free lifetime sharpening with replacement of the blade of my scissors when needed.

A bit off topic question, how do you people here sharpen kitchen scissors?

^^ I sharpen my cheap scissors using aluminium foil. Just tear off a big sheet, fold in half (or more) and snip away. Works for me.

I use stones to sharpen kitchen scissors.

No idea.
My catch scissors go to Cutco for free sharpening, only have to pay $10.00 for return shipping.
Sometimes, they just give me replacement instead of sharpening it.