Help me sharpen this knife

… I’ve used oil and water stones, an Edge Pro and taken them to professionals. I now use a Chef’s Choice electric dual angle sharpener similar to the one linked below and a pull through sharpener to touch up between sharpenings. …

The only caution I’ll throw out is that zackly has experience with manual sharpening methods, which gives you a feel for how little metal needs to be removed when sharpening. I’ve found that most people tend to grind away far too much material when using an electric sharpener if you’ve never hand-sharpened your knives.

I’m going to second Greg’s comment & add there’s a difference between making a knife sharp & keeping it sharp. Once a knife is properly sharpened it takes very little to keep it that way.

In simple terms: If the person wants no learning whatsoever, then an electric knife sharpener is better. If the person prefers a more refined edge and longevity of the knives, then hand sharpening on stones is better. There are tons of options in between.

Now, a slightly safer comprise is to get the Chef’s Choice manual pull-through sharpener. It is slower, but it also reduces the chance that the knife get over-ground.

I was about to purchase one of these King 1000 grit whetstones: https://www.amazon.com/KING-Grain-Sharpening-Stone-Medium/dp/B0016VC46A

However, the salesman told me it is only good for carbon steel. That stainless steel takes forever to sharpen on this kind of stone. If I have both stainless steel and carbon, he said, I should get a ceramic stone. I just wanted to verify with you all to see if I understood correctly.

a 1000 grit stone is fine for stainless. Ceramic can often take longer

That knife has been butchered. The knife sharpeners you have used in the past are not an option. There is no excuse for looking like that.

It’s great that you want to learn to sharpen your own knife. It will be easier to learn with a knife in good shape than trying to recover one. Fixing that knife really needs a grinder and you don’t want to start there. Look at what you “professional” knife sharpeners did!

Find a good professional. Someone who looks at that knife and says “Oh my God! What have you done?” Have him or her fix it and maybe give some pointers. You’ll want a two-grit stone (fine and medium) and a very light sharpening oil; some people use water but starting out the metal will float up better on oil and your learning curve will be easier.

Take your hone with you to the knife sharpener and get some hands-on feedback on your technique.

When your skills develop a bit and you decide you like being self-sufficient start shopping for a tri-stone. Same technique as a block, just more surface area and more flexibility.

Stay away from pull-through hones and sharpeners and other patent devices. By the time you figure out one has failed you’ll have ruined your knife again. A pull-through hone with a misaligned wheel will roll over the edge of a knife in nothing flat. A v-sharpener with clogged grit on one side will shift the cutting edge and make good slicing awkward. There is nothing better than good basic skills.

The idea above about getting some training is good. The challenge is sorting the wheat from the chafe. Find that really good professional knife sharpener and ask for advice. I learned butchering by asking a respected butcher for advice on some coursework - he took me under his wing and got some free weekend labor grin and I learned a LOT.

In general, I would say I disagree with the saleman. That being said, I think it would be safe if you want to get a good ceramic stone as well.

I recently was disappointed by the nearby sharpener, who specilaized in all kinds of shop equipment, it seems, from table-saw blades to router bits. But he said over the phone that he does kitchen knive, and, as it happens, very cheaply. Get what you pay for. The half dozen blades I took there were not worse for the wear, but not much better.

I see Cooks Illustrated recommends a mechanical Chef’s Choice Trizor XV. In the comments section at Amazon, many people remark that that can’t believe Cook’s Illustrated omitted testing of a Work Sharp Ken Onion version, which works more or less like a shop belt sander adapted specifically to knives. Anyone know about those?

At home, I have a Norton Tri-Oilstone (not cheap), but have yet to get the super-edge I seek.

Using a sander belt with the right grit, speed and angle can be very rewarding. But those are 3 things you have to get right. Not as easy as it sounds

I guess the main advantage of the Ken Onion Work Sharp is that the angle is sort of adjusted or locked in for the users. However, I do think it will require some basic knowledge going in and not a plug and play like a typical electric knife sharpener. I agree with your comment. 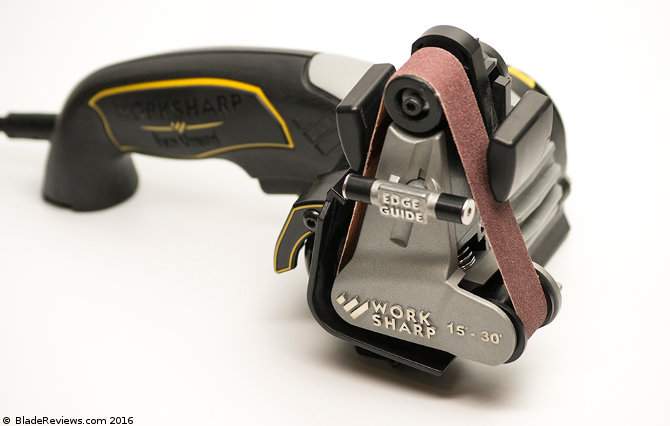