and there’s no food topic i can’t stop talking about. lol.

Welcome @afoodobsession! I think you will enjoy reading and contributing to the below threads, especially the cuisine of the quarter which happens to be Italian and is right up your alley.

Every region of Italia has its signature classics and special places that offer them. Abruzzo: Is known for its roasted Lamb ( Agnello Arrosto ) This region is where the shepherds still tend their flocks of sheep. Umbria: Known for their chick peas and Zuppa dei Cecci. A thick hearty bean soup. Basilicata and Calabria: Are known for their aubergine dishes. Sardinia: Carta di Musica, a thin crisp cracker bread and of course their shellfish and seafood stews. Apulia: Famous for its ho…

There is a general monthly what’s for dinner thread:

How about a thread for what you are cooking on a given night/day? I feel like our own home-cooking pics are scattered all over the place. I’ll start it off. First pic is from last night. I attempted to make Shrimp Etouffee for the first time. Came out really good. Funny thing is, when I went shopping for ingredients, I totally missed that it called for clam broth. So when I started cooking I noticed and didn’t feel like going out again. So I made a quick stock out of the shrimp tails and shells…

I definitely agree that it is very dis-organised or as you stated, “scattered all over the place” …

Wow, that’s quite a background! You will fit in well here and and I’m sure we will all learn some great info from your posts.

Have you tried Gabriellas yet?

I have to say i was a little disappointed in Gargiulo’s. Sat down at bar, with wife about 10 minutes behind me. Just wanted a glass of wine and a quick bite between kids’ pickups and dropoffs. There was another guy at the bar, seemed to know owner(s)/ associated persons. He was ordering food, so I also asked for a menu, which i got (bartender asked a manager if they were serving at the bar tonight, and got the nod yes). Wife arrived, told the hostess she was going to eat at the bar, and the hostess told her they were not serving at the bar. Luckily she pointed me out, and the hostess told her, yeah that is ok then if you are with him. I guess it is just some confusion around what kind of capacity they can handle. Anyway, minor strike there I guess. Bartender was a little disinterested and unengaged, possibly focusing more on known patrons/associated persons. On to the food - house salad ordered with no red onion, came with red onion. it was fine, hard to make a terrible house salad. Wife annoyed at having to pick out the onions. We also got the seafood salad, which needed some sprucing up. More lemon and garlic for sure. it was kinda bland, but the seafood was tender enough. Also for a higher end restaurant, dont give me the little maggot shrimp. Use the bigger ones and slice em up. The riceballs was actually really good, but they were only lukewarm. Flavor was good tho and sauce was good. Got a pasta which had bacon and zucchini in a light pink sauce. No flavor. Needed to be doused with pepper and cheese. Maybe it is my fault for ordering a bad dish. The zucchini was small cubes and sauteeed i guess. Im not sure what i was expecting exactly, maybe something along the lines of the fried pieces you get as an amuse at il Mulino. The penne was al dente at least. The way it came, the veg lended nothing to the dish unfortunately. Wife got shrimp cocktail, it was fine.

Overall, I think the prices are high for what is is. Nice to have an italian close by to soccer fields, but i dont think i would go out of my way. Maybe give it some more time to work out the kinks. Plus the parking, even tho they have valet, is a little bit of a nightmare.

Not sure what to read into this, besides I guess they weren’t killing it at lunch. 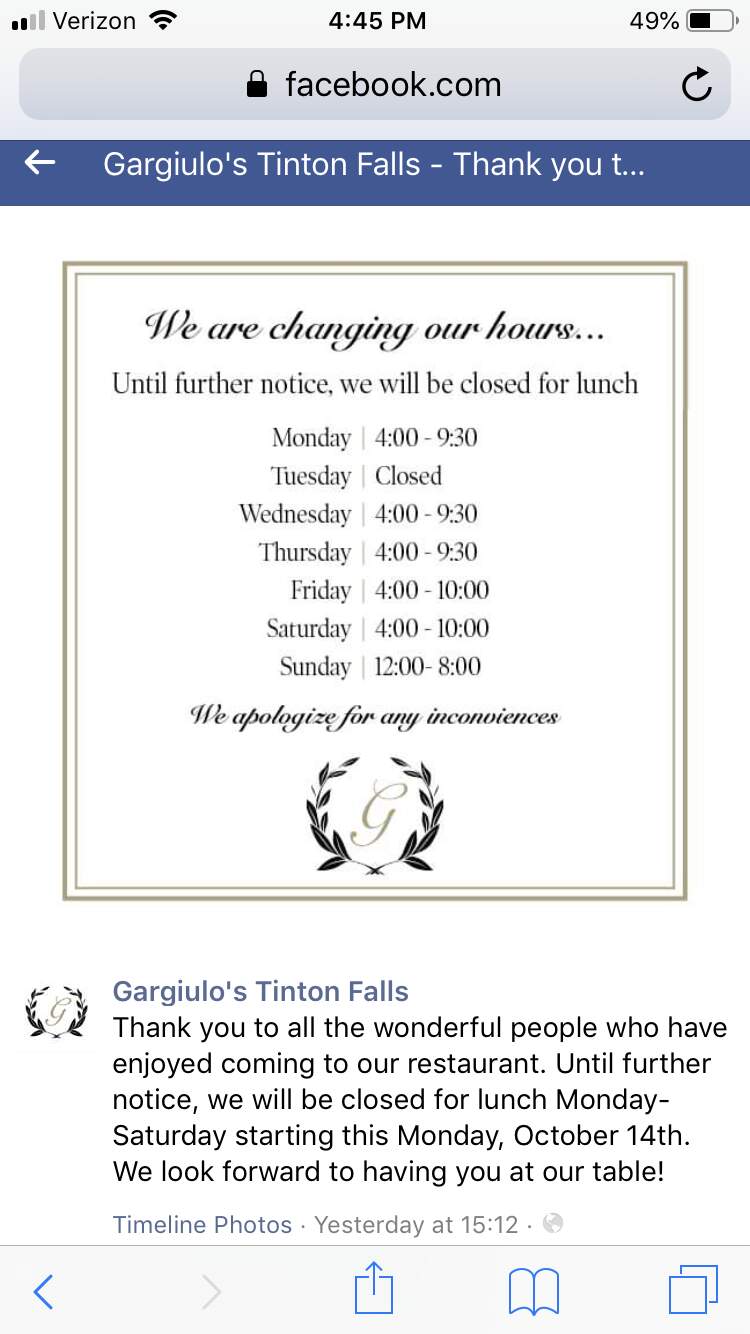 Hello, I’m new here!
I just wanted to say that Tortoni aren’t from Bindi.
Very nice community here for what I can see!

Welcome aboard! I think you will enjoy this forum a lot.

I haven’t been here yet but it is in my radar. Do you have any recommendations? Thanks

Hi Johnny and thank you!

I can recommend you if you want Roman pizza and real Italian food, Qua Pizza in Manasquan.

I know the owner Matteo, he’s actually customer of mine, and I can guarantee you that it’s one of the best places to go if you want to have something very good.
I’m very picky with Italian food (I just moved here 4 ya) and that’s why I’m always afraid of Italian restaurants, but on this one I’m very confident.

It’s very casual but the food, so good!

Lu,
Let me welcome you as well. Just curious you mentioned that Matteo is a customer of yours, do you mind telling us what you do? Are you in the industry? I see you corrected my Tortoni assumption do you work for Bindi or another desert related company? Just curious.

If you don’t mind me asking, how did you find us? Always a pleasure to have new members joining the conversation, especially if you are industry too. So how did you stumble upon us?

I can’t stop laughing at this!!

Hi Notjr and thank you!

Yes I do work for Bindi desserts as Area Manager and I take care of a nice chunk of NJ, that’s why I told you that the tortoni aren’t from Bindi.

I find out about you because I was looking info on google about Gargiulo’s, and since it was many months that I saw this place under renovation I was wondering if they already opened or not.

Then I started reading here and there and I really liked the community so I thought it would be nice to join you.

I like food also, good food, and it’s nice to find info here on restaurants around my area ( I live in Matawan).
I told you also about Qua Pizza, not to advertise them but because as I said before, I like good food and it seems that you too so you should know them.

Thanks again for having me here!

Welcome. We’re a very Monmouth ocean and middlesex county focused group with mr and mrs P as our reps from the north.

Welcome LuGueru! I recently moved to Hazlet, so we are practically neighbors. I’d love to hear any local suggestions you have!

I’m glad that you are Monmouth, ocean and middlesex counties focused since I live In Monmouth and do business in these areas!

Yeah, Hazlet is literally 5 min away from where I live.

just came across this today. About as hard hitting as any of these papers/sites gets these days. Given that most mediocre places get 2.5-3 stars this is not a great review by any means… I hope these guys can right the ship; would really be nice to have a solid red sauce white table cloth old school joint nearby.

would really be nice to have a solid red sauce white table cloth old school joint nearby.

Have you been to Jimmy’s in Asbury Park? That has been my go-to spot since we moved here 26 years ago. Never a bad or even neutral meal, service can be an issue if they are slammed in the summer. Other than that I have never had a complaint. (their pizza is pretty dam good too)

I have a problem with a professional publication (newspaper, magazine, etc.) reviewing a restaurant one month after it has opened and the reviewer eating there only once. A new restaurant, even one with a pedigree like Gargiulo’s, needs more time than that to iron out the kinks. In NYC, the standard timeframe for professional restaurant reviews is 3 months after the opening + several visits (usually 3).

no- it’s very high on my list- haven’t been getting out much lately- esp to Asbury. It looks exactly like a spot I would love and what I expected Garguilos to be.
hopefully nobody in shorts and tank top when we finally get to visit.

agreed- I forgot to point that out. Was just using the review as more confirmation bias of what the general consensus seems to be about the place at this point considering most of the local places hit about as hard as a pillow.