Doughs and desserts that are not baked

Did you like it? Was there a meaningful taste and texture difference?

I haven’t made the CI version if that’s what you are wondering about, just the first two I linked and described. With the storm I wasn’t able to attempt any more versions. Texturally I ultimately liked the version with everything cooked a bit, but as I mentioned, they were both delicious in different ways and it was very hard to pick one over the other.

Today I made some sourdough English muffins using this recipe. 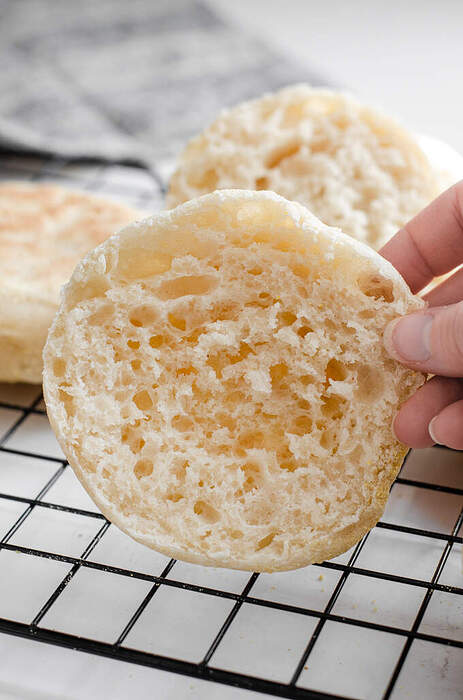 These are the best sourdough english muffins! They're full of nooks and crannies, with just the right amount of tang from the sourdough.

I’m not a huge fan. I personally don’t really like retarding sourdough in the fridge. The dough is already tangy and complex in flavor from the starter. I simply don’t see the need in doing something that has as its main benefit developing more sour flavor for naturally leavened dough that is sour to begin with. Still I was curious if I’d come around, so since I had fed my starter after the power outage, I thought I’d try these out.
They’re too sour for my liking. I also meant to use milk instead of water but forgot and ending up making the recipe as written (outside of upping salt to 2% including the starter). I prefer milk for the browning and sweetness it provides. I used Stella Parks’ method for shaping these. I used an ice cream scoop and just dropped them on lots of cornmeal, barely shaping them into rounds. Dough really should be loose when making English muffins if you want the real deal rather than white rolls in English muffin form. These muffins really spread during final proof, though, so this is the time I find better for some refrigeration so that they hold their shape.

Actually the tang of these has grown on me. I’d still be likely to switch to milk instead of water, and I think shaping needs some work, but texturally they’re great and the flavor is really good. I don’t think a cold ferment is needed here for the flavor, so I’d be willing to try them with a room temp ferment followed by cold final proof for ease of handling. I split this with a knife and still you can see how good the crumb is in terms of nooks and crannies. 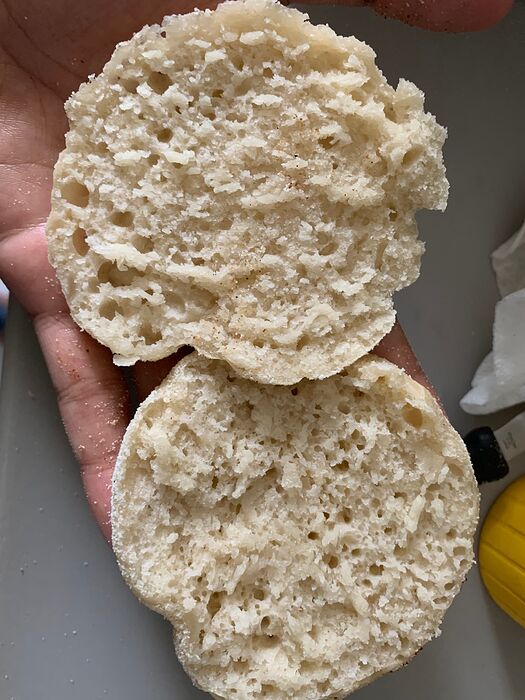 Made this rice flour batter bread today with 4 grams salt and it’s awesome. The crust is like the rice at the bottom of the pot (concon in DR, various names throughout the world). I must try this! The rice at the bottom of the pot is the best. I’ve perfected my golden brown rice crust but am moving to a new house/stove so will need to adjust.

Did another posset comparison using ATK’s version vs once again Avery’s version on YouTube. This time I did lime.
When you break them down into grams they’re really very similar. Very close on the acid amount but more sugar in the ATK one.
I’m a bit surprised by how much more firm Avery’s is. I think by cooking the juice with the cream it reduces as well. The ATK one adds it after reducing the cream. It could be my version just didn’t turn out like theirs, but Avery’s has been the same each time I’ve made it. It also starts setting rather fast, too.

Again they’re both delicious in different ways. I don’t mind the added sweetness of ATK’s and if I were making it for others I’d likely use their ratios. If I had to pick for myself, I’d personally go with Avery’s, because to me it’s just very well-balanced. It’s tart and refreshing, and so creamy. It’s also the simplest one. I get the thought behind not adding the juice until after simmering the cream, but frankly I don’t perceive the flavor to be any less fresh and bright when everything is cooked together from the get-go. 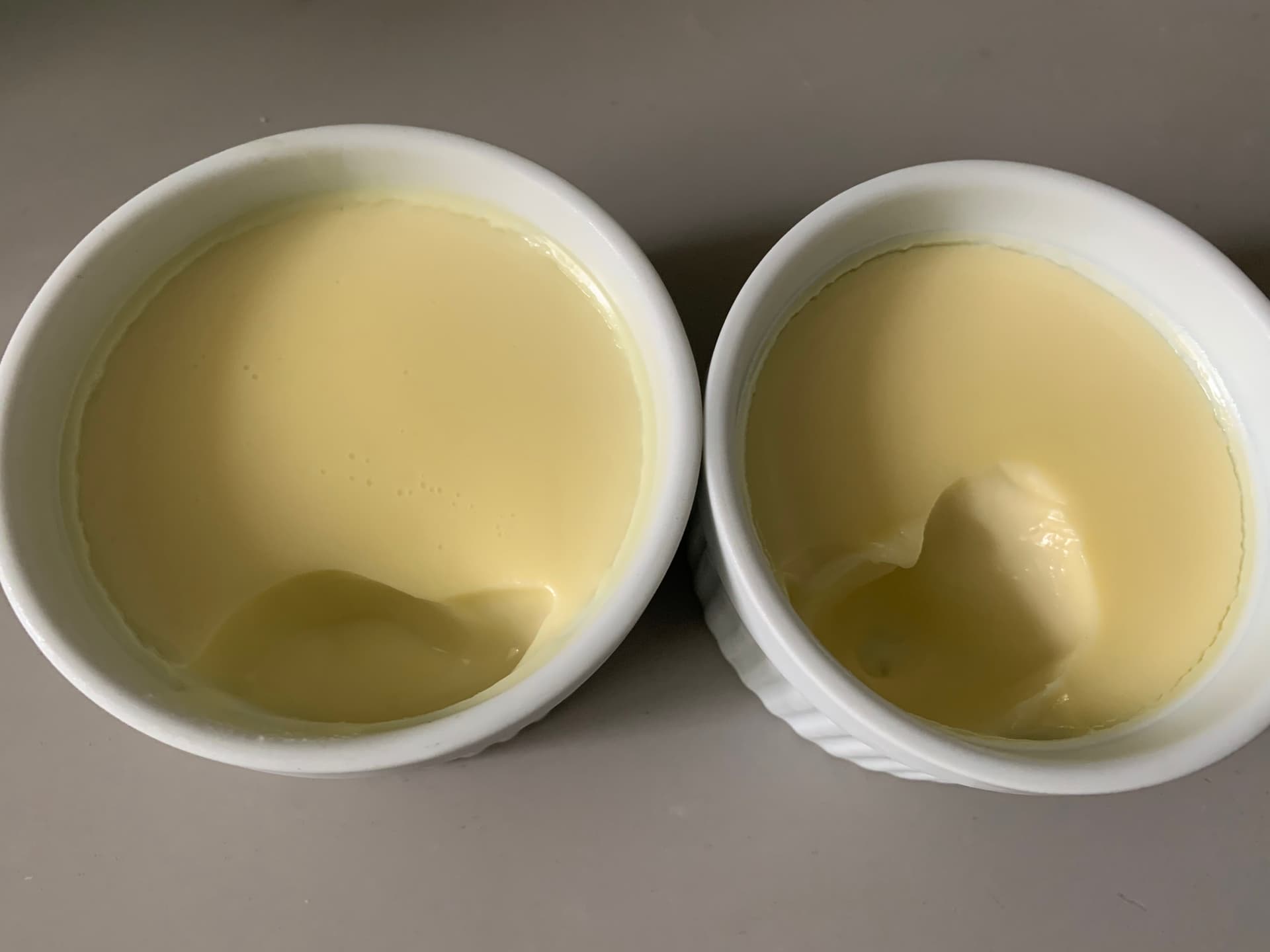 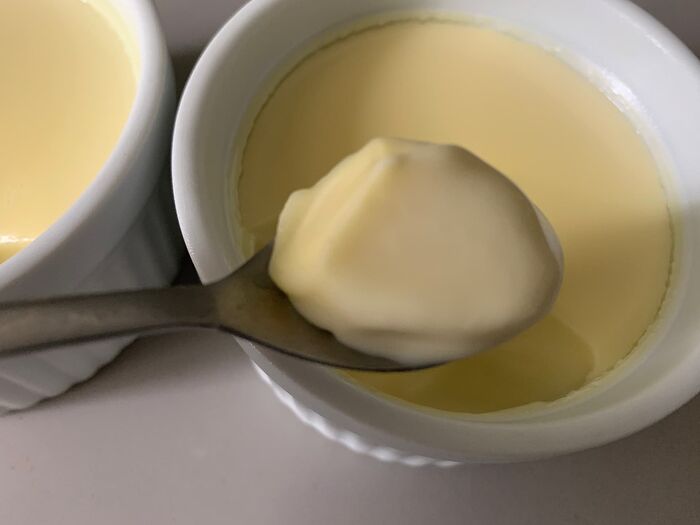 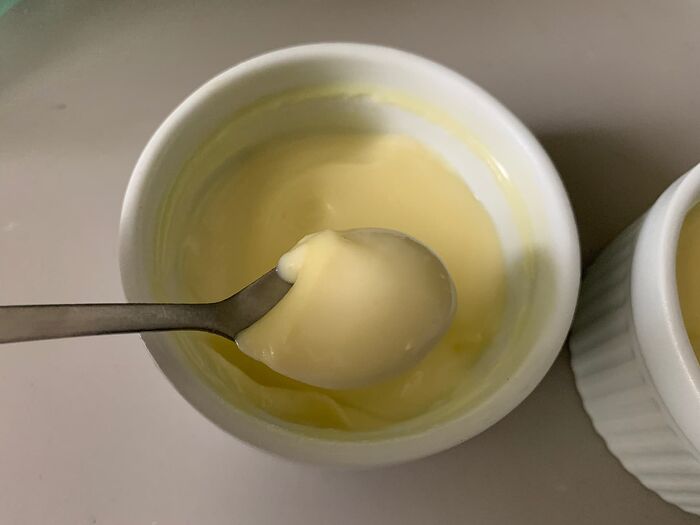 Looks delish! Is there a no bake version of that crust?

Hi I don’t know but I’m sure you try out some granola or something. That nutty salty crust really does bring it all together and serves as a shovel to the pie hole tho. Good luck !

Not very pretty here as this is brown and another shade of brown, and I used disposable cups, but this coffee panna cotta with salted caramel sauce is really delicious. I forget if it was here or on chowhound, but someone expressed fear of making things like panna cotta, but it’s honestly really easy. The thing to keep in mind so you never make a bad panna cotta is this: 1%.

The amount of gelatin you need to set a panna cotta and not end up with a gross overly firm texture is about 1% of the weight of the liquid. In fact you can get a set with slightly less than 1%, but it’s a good and easy amount to remember. If you go above it, let it be no higher than 1.2%. Panna cotta with too much gelatin is really bad. Not only texture is affected, but the flavor is carried differently when it’s too firm. 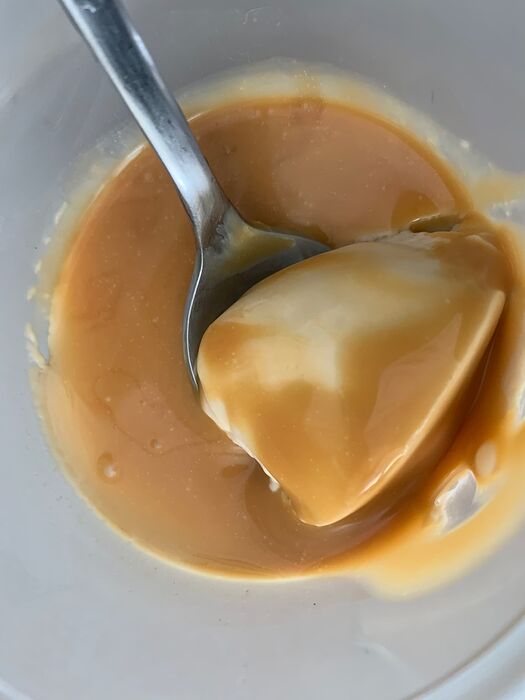 1% gelatin is right around 3/4 tsp per cup of liquid.
I used mostly cream with a bit of milk, as I find all cream to be a bit too rich and it leaves your tongue feeling coated in fat.
Normally I’d salt the mixture, but since this is topped with a salty caramel sauce I left it alone.

I made Claire Saffitz’s tiramisu icebox cake. I used 2 eggs instead of 3 yolks and water because I like using whole eggs in tiramisu due to lightness, and also because I’m currently making lots of things that call for yolks, so anything where I know whole eggs will work perfectly well is my preference. I also heated this over simmering water to 160 degrees to make it safe for anyone to eat, as pouring hot syrup doesn’t guarantee the eggs getting heated enough. I always strain afterwards to get any bits of white.
It’s pretty good, though in terms of tiramisu it doesn’t beat Stella Parks’. I do like that similarly to that one it’s not too sweet or boozy, though. And the other aspect is that using cream (rather than all mascarpone as is my preference) does bring down the cost, as I’m considering making individual tiramisu to sell.
It depends on the mascarpone (which varies greatly in terms of how thick and stiff it is), but I recommend beating the mascarpone lightly to make sure it’s perfectly smooth before whipping with the cream. I’ve had mascarpone stay lumpy when I just whipped them together. I am planning to make brigadeiros as one of the Thanksgiving menu items. I am considering these three recipes, which are basically the same: 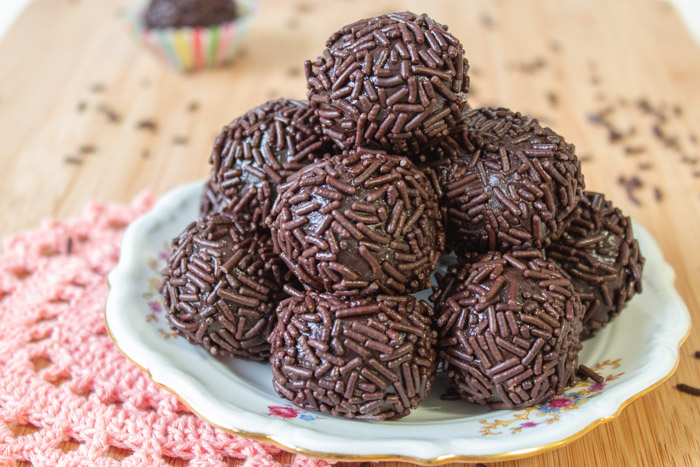 This Brigadeiro recipe is straightforward and tastes divine! It's a delicious Brazilian sweet that melts in your mouth. Get the recipe! 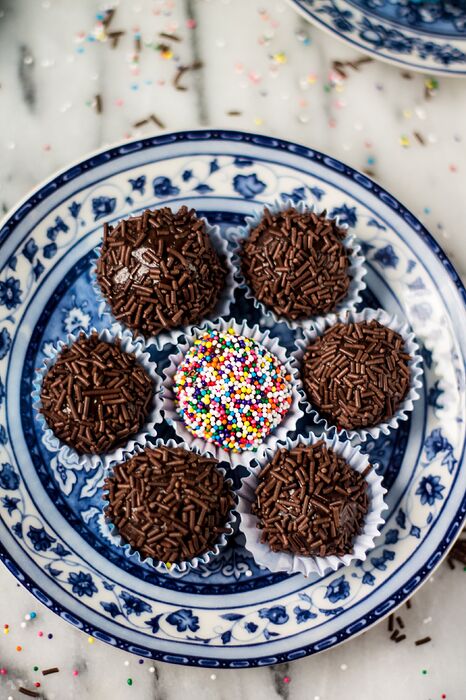 Traditional Brigadeiro Recipe. Brigadeiros are the most loved brazilian sweets and will win your heart in one bite! 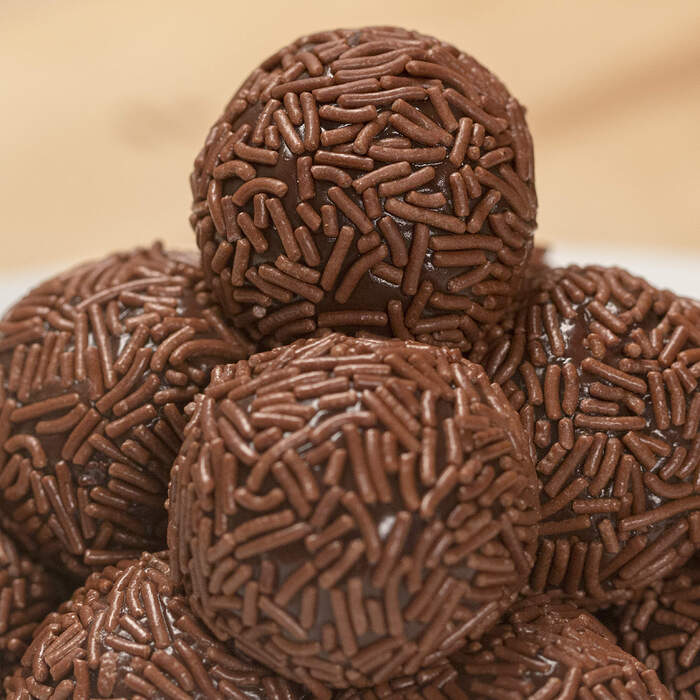 I want to know: has anyone here made brigadeiros?
Any suggestions to make it foolproof: i.e. to ensure that the mixture thickens up enough to roll into balls?
Any ideas for what to roll it in, other than chocolate sprinkles?

I will be making these on the Tuesday before Thanksgiving and storing them in the fridge, and then transporting them on Wednesday (5 hours in a car), refrigerating them again to eat on Thursday. Any do’s and don’ts here? Should I not refrigerate them? I am concerned they may melt a little if I don’t refrigerate them. I mean the weather outside may be cold but the houses are all heated.

Looking forward to receiving some wisdom here. Thanks in advance,

I’ve always been fascinated by these, and yet never made them. Watching with great interest, please report back!

(The first dessert I ever made as a little kid was something the book called “coconut ice”, which I now recognize as a twist on these - they added desiccated coconut to the condensed milk. Recently saw someone post them for Diwali renamed coconut laddoos, lol.)

they added desiccated coconut to the condensed milk. Recently saw someone post them for Diwali renamed coconut laddoos, lol.

Coconut brigadeiros, called beijinhos (little kisses) are a Brazilian variant on the original: 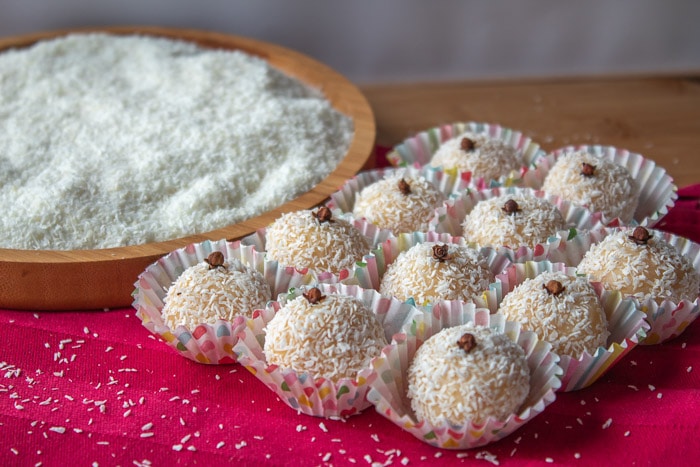 Check out this tasty and easy beijinho recipe. This Brazilian sweet is also known as coconut brigadeiro and it's finger linkin' good!

Well, here is pretty pink and white coconut ice, and another recipe pre-condensed milk. And here’s the laddoo, with Rooh Afza added (ummm).

at this lady’s Pani Puri (jaljeera filled) Christmas ornaments and Chaatcuterie board!!

She’s very creative and sweet, I just can’t with the implied waste of those boards, though!

I made a vanilla and chocolate cheesecake today. It was so good and creamy! I would say it was the best cheesecake I made so far. I used vanilla bean paste for the first time which I think made it taste much better than it would have otherwise. Overall both me and my fiance are very impressed with this one.

Sorry for the picture, I really struggled to take a good one. 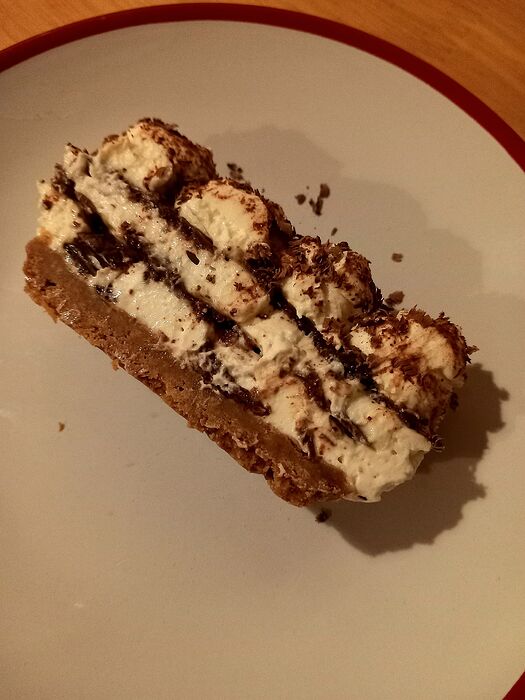