Doughs and desserts that are not baked

I’m frequently making breads and desserts that are made without an oven. Whether it be puddings, icebox desserts, steamed cakes, or donuts. And lots of flatbreads!
Today it was Imeruli khachapuri—pillowy soft flatbread stuffed with cheese. I always feel this sort of thing is a bit cheap in that of course anything loaded with cheese will taste good to most people, but there’s no denying how satisfying a fluffy, warm bread with a mix of cheeses can be.

I happened to have some mozzarella cheese to use up, and also local queso de hoja. Reading about sulguni cheese it actually sounds very similar to our queso de hoja. Like fresh mozzarella, but firmer, tangier, saltier. The imeruli cheese is usually substituted with feta, but I had some open cream cheese and I thought with the two cheeses it would make a tasty combination. And it did. The queso de hoja does the heavy lifting, so there’s a nice amount of tang.
Normally I’m all about the yeast dough, but having just made a batch of kefir, I decided to go with the type of dough leavened with baking soda. I know that these doughs turn out beautifully tender thanks to kefir, yogurt, or sour cream. The end result was flatbreads that don’t taste any worse for their lack of yeast. 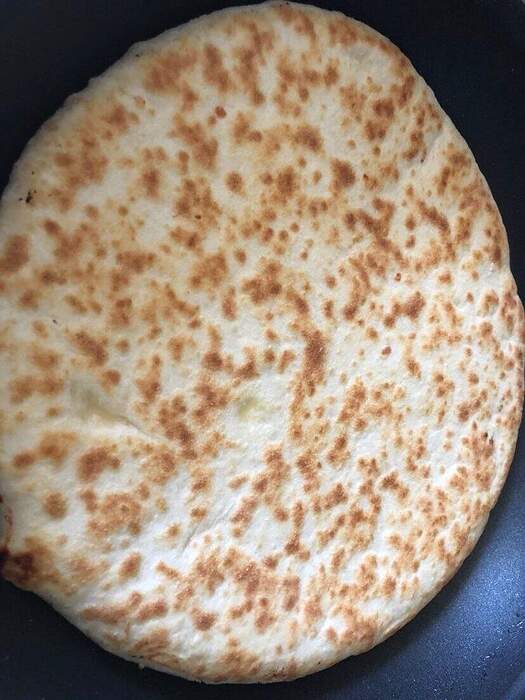 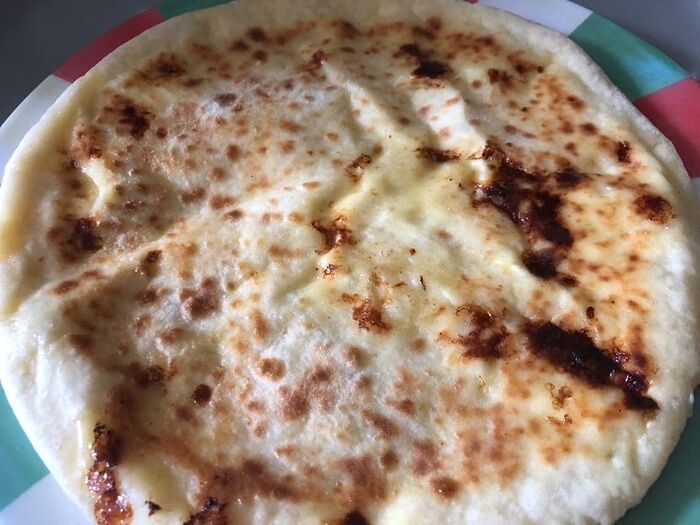 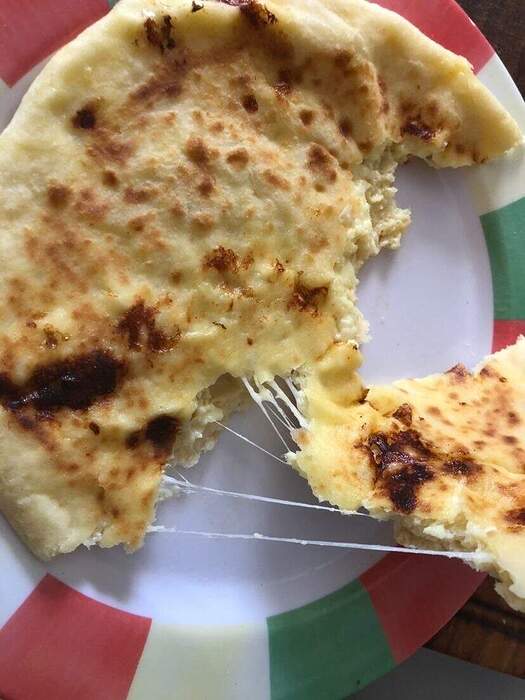 Last time I checked his blog, the post had been removed. I emailed asking him to repost it. He apologized for removing the post, emailed me the recipe and reposted it. He even included metric weights for the milk at my request. 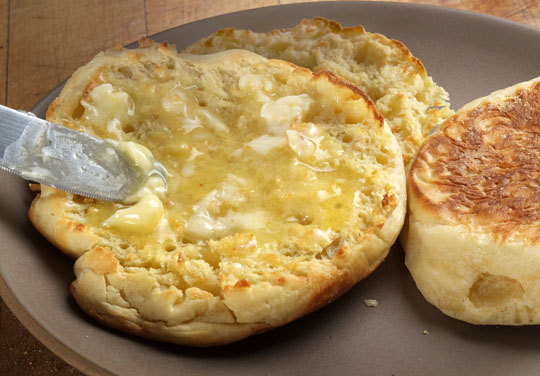 I asked two friends, Emilia and Marlene, for help in developing an English Muffin Recipe for the first in a few more #fromscratch challenges.  This single challenge was more daunting than expected. There's not much out there in the way of...

The heat has arrived here, so turning on the oven can make the house uncomfortably hot.
I recently made sour cherry sorbet and I have a lot of egg whites, so I thought I’d try out a baked Alaska, but I’d steam the cake portion rather than bake it. The chocolate cake on its own is definitely not sweet enough, but I thought combined with sorbet and meringue it would be good. And to me once everything was combined it was the perfect level of sweetness. I’ve always preferred baked Alaska made with a tart sorbet (typically raspberry), but even then it’s pretty sweet with a thick layer of meringue. I would make smaller scoops of sorbet for better balance, but I really liked this overall. 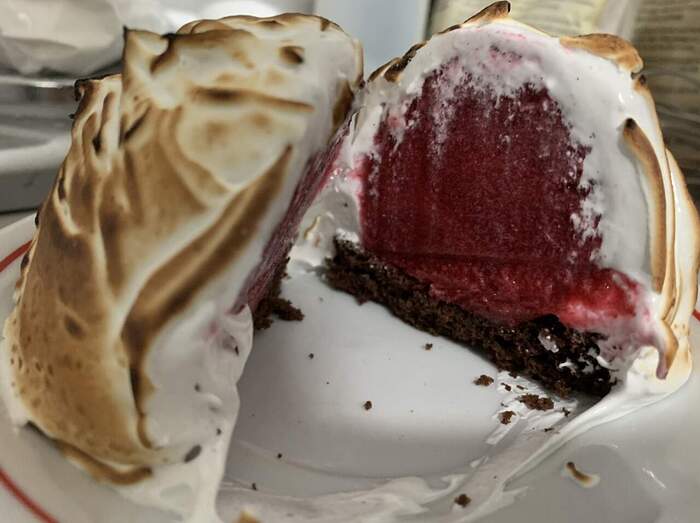 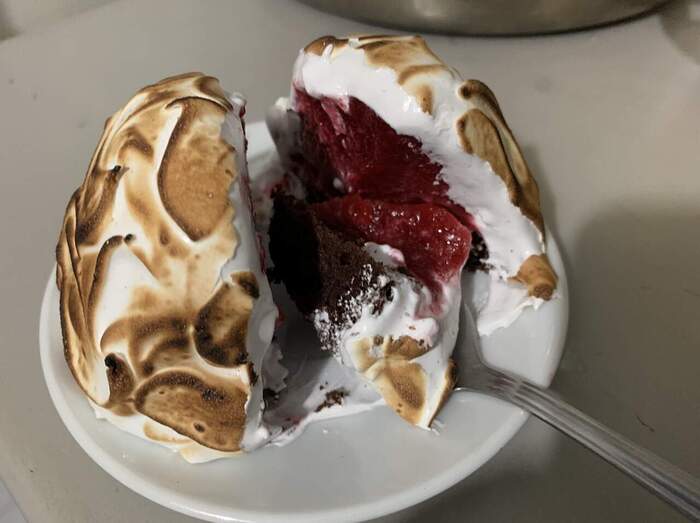 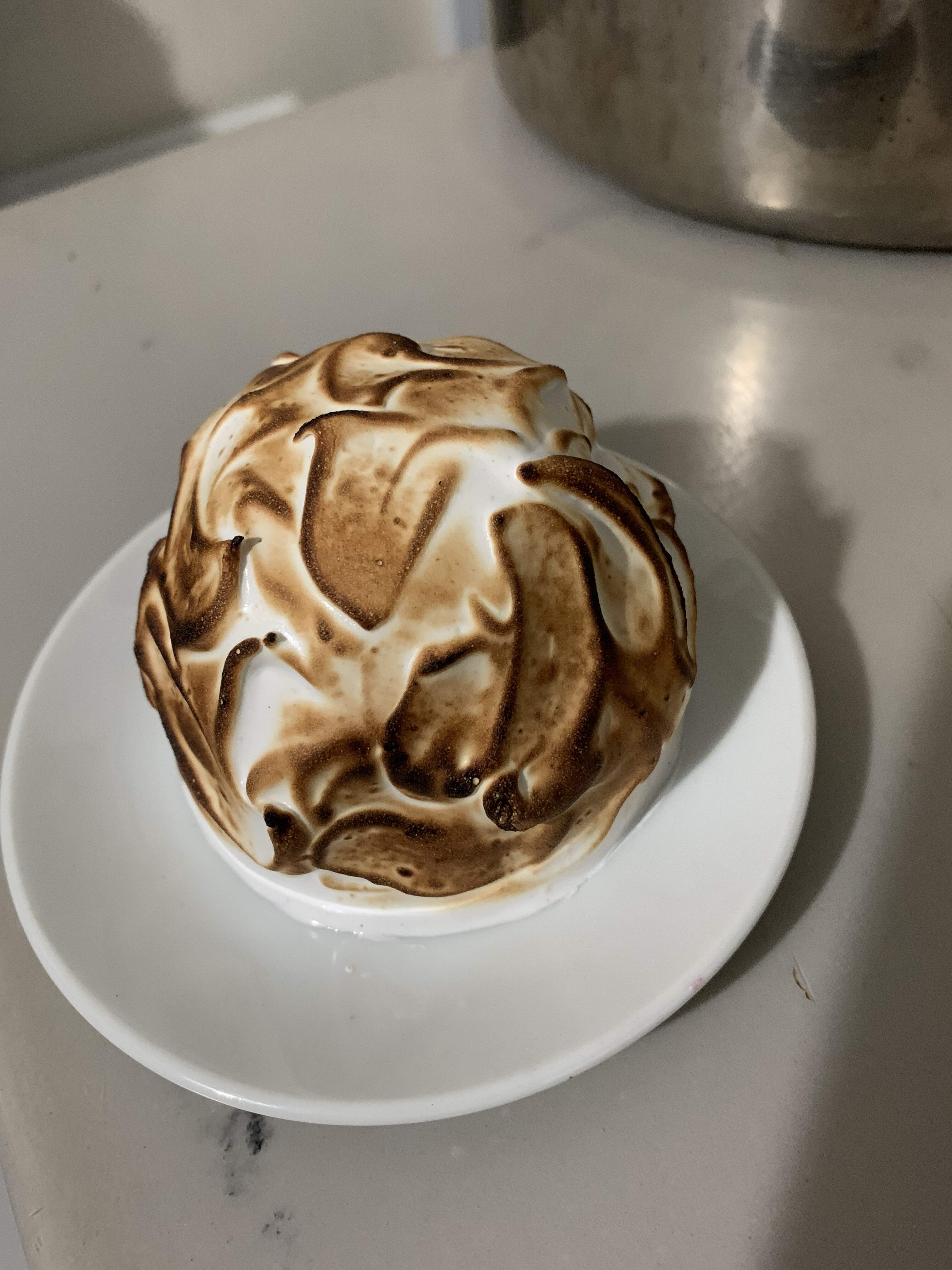 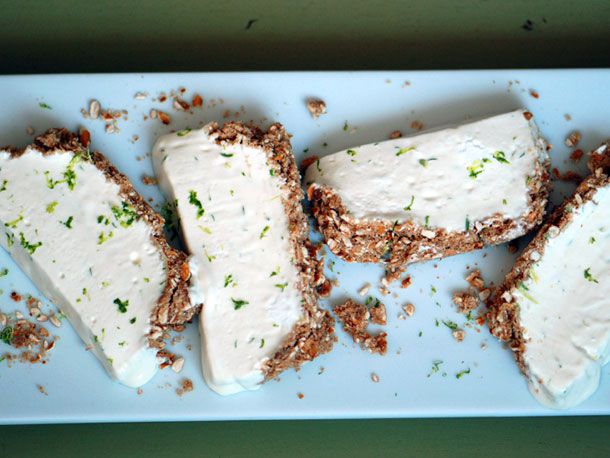 I made this a long time ago and I loved it, but having made it again there are definitely some changes that I think would improve it.
First I’ll say that this recipe is a perfect example of why semifreddo is much better made with meringue or at least a pate a bombe rather than cream. I get why so many involve whipped cream, but in my experience semifreddo made with whipped cream always turn icy, and the cream feels fatty on the tongue. Semifreddo made with meringue is pillowy and impossibly creamy.
Yes it’s much easier to whip cream than make Italian meringue, but the meringue base is so much nicer. It’s hard to describe how lovely the texture of this dessert is. It tastes richer than it is. 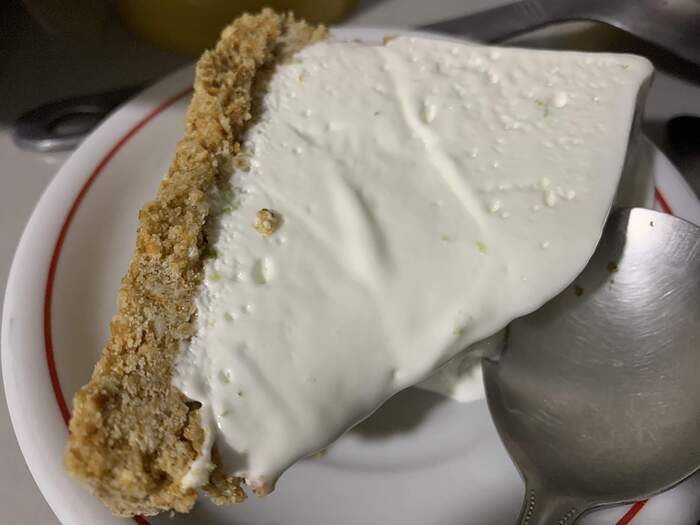 As for the complaints…
People complain that there’s too much filling, and depending on your pan, I can see it. I filled my 9-inch Pullman pan to the top, so shorter pans might pose a problem, though they do tend to be a bit wider.
The solution proposed by some is to cut the meringue, but I think that’s the wrong way to go about it. I would
Reduce the sweetened condensed milk by half and keep all the meringue, as it would make this tarter, which would improve it, because as is I added a little more juice and this is a touch sweeter than I would prefer. The meringue is too important to reduce it imo. If I were to cut it down it would have to be just 1/4, so using 3 egg whites rather than 4.
The crust is hard to cut. Coarser crumbs will make for a crust that is less compact. I also will make this in a different pan next time so there is a thinner crust layer and it will also be easier to unmold.

Simple, elegant and sophisticated = lemon and sugar crepes. Just make crepes, sprinkle with sugar and lemon zest, fold and serve with an additional shower of sugar and wedge of lemon.

If I want this less sweet, maybe I could cut the 1 cup sugar in half instead of the sweetened condensed milk… or would that be a bad idea?

You shouldn’t cut the sugar when making meringue, especially cooked meringues like Swiss and Italian. It’s what’s giving meringues their structure and density.
Better to cut the meringue to 3 egg whites and cut 50 g of sugar. The water amount does not need to be changed because it’s ultimately irrelevant how much water you start with, since your sugar syrup will only hit a certain temperature once sufficient water has been cooked out. The semifreddo can do with a little less meringue and won’t suffer for it.

Honestly everyone I’ve made this for really likes it as is (granted as I said I always add in a little more juice). I just happen to like my citrus desserts pretty tart and I am very picky about the sweetness levels in desserts in general. My mom who doesn’t typically like tart desserts still expressed “this has lemon” upon tasting it, in other words that it is tart, but for her, the tartness is reasonable unlike other citrus desserts I like.

I only serve one course.

It might be steak, a seafood, a vegetable, or it might be pie, cookie dough ice cream or sweet rice with coconut milk and mango. Often-time it’s just bourbon. Thanks for the insight. I only ask because I am ‘afraid’ of desserts being too sweet. Though I don’t want to mess up the texture.

I wanted more semifreddo, so this time I attempted one made with Greek yogurt, peaches, and amaretti. Flavor-wise it is good, but reminded me of why I don’t tend to like fruit in semifreddo, and that’s that it leads to ice crystal formation due to water content. Even though the fruit is cooked, with the sugar amount being low, the fruit freezes hard. I wonder if using gelatin to thicken might help, but in general I think it’s best to include the fruit as a flavored layer, blended and folded into part of the semifreddo base itself, or as a topping served with it.

Having made another semifreddo, I would definitely reduce the meringue to 3 egg whites and cut 50 grams sugar out of the lime one and replace half of the sweetened condensed milk with heavy cream if I wanted it less sweet. But since everyone likes it as is, I’d just stick to the meringue reduction for those that find it too much for the pan. 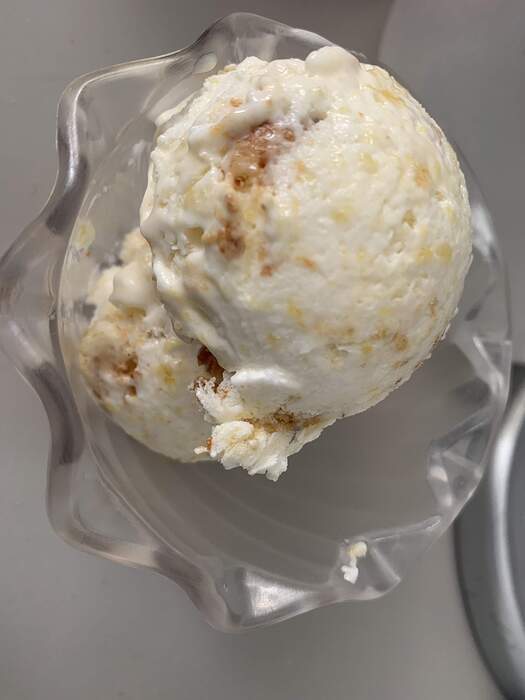 Buttermilk panna cotta with macerated berries is a favorite.