Do You Love Pastrami?

Chef Kohn says they soak the meat for 3 to 4 weeks in a salty, spicy briney wet cure of salt and sodium nitrite, a curing agent. What comes out is essentially corned beef, but their pastrami process is different from their corned beef process because their corned beef is dry cured, not soaked in a brine. At least that’s what they tell me.

Never really liked this guy from Bon Appetite, but found this interesting… Awesome! What did you order? 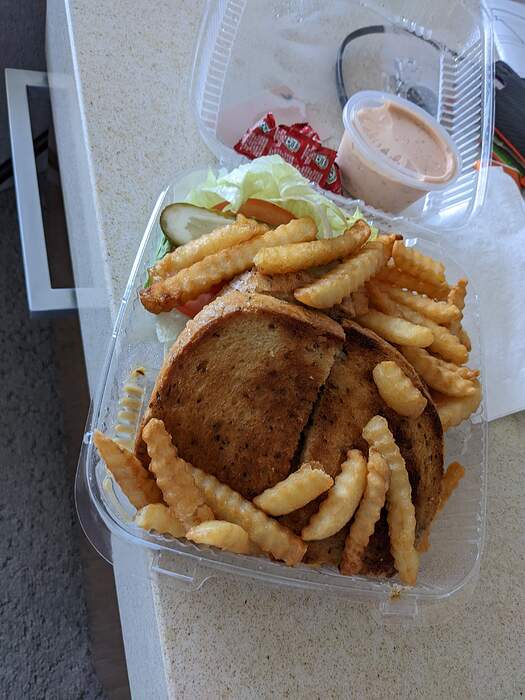 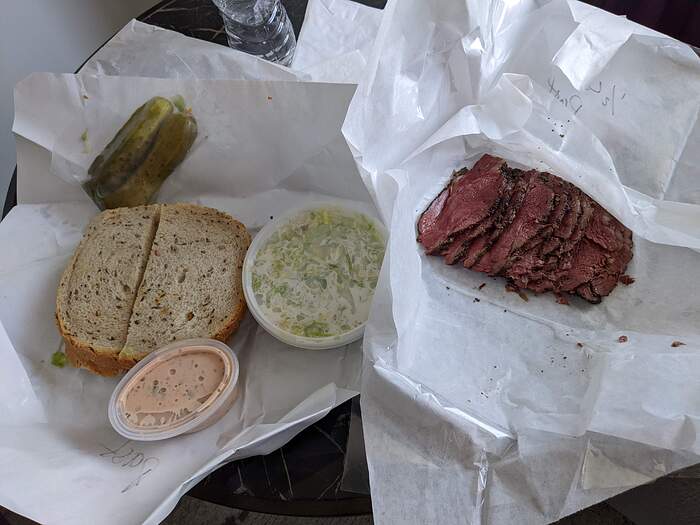 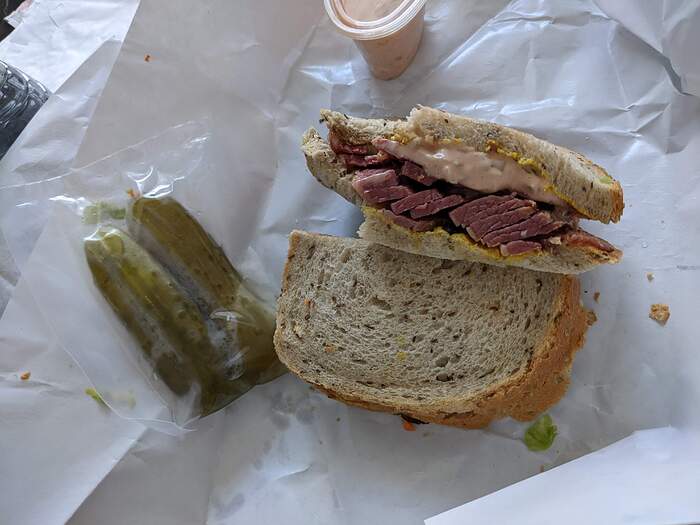 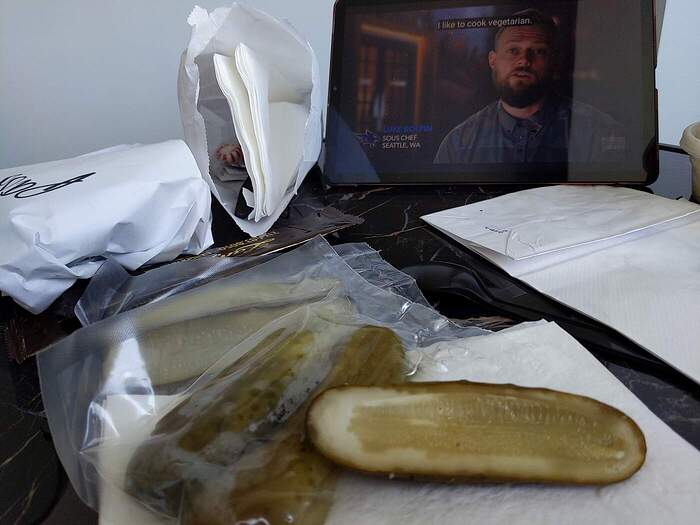 It’s good, although I’m hesitant to eat much, since I have a lot of conference left today. The pre-packages pickle seems different from the one with husbands. patty melt.

I got a half pound of pastrami I’m hoping to take home, but the refrigerator in the room doesn’t seem cold.

I got a half pound of pastrami I’m hoping to take home, but the refrigerator in the room doesn’t seem cold.

Take it to the concierge desk and have them freeze it for you (it is quite good from frozen). The pastrami in your second pic looks amazing! Now I am bummed I am making my sweet & pungent shrimp tonight (which is one of my favorite recipes).

Take it to the concierge desk and have them freeze

I never would have thought of that!

“Now I am bummed I am making my sweet & pungent shrimp tonight (which is one of my favorite recipes).”

Langer’s’ is exceptionally good pastrami. In the LA Metro area we, OTOH, have a chain called The Hat which SAYS it’s pastrami but is a whole different thing. It’s very thinly sliced, usually very fatty, and I notice their actual menu calls it “roast beef” even though it’s listed under “ Pastrami Sandwiches”. Caveat Emptor.

The Refuge, San Carlos CA
Top notch pastrami. Flavor is a tad milder than Langers or Katz’s, but the texture is perfect. I’m going to ask them not to toast the rye next time. 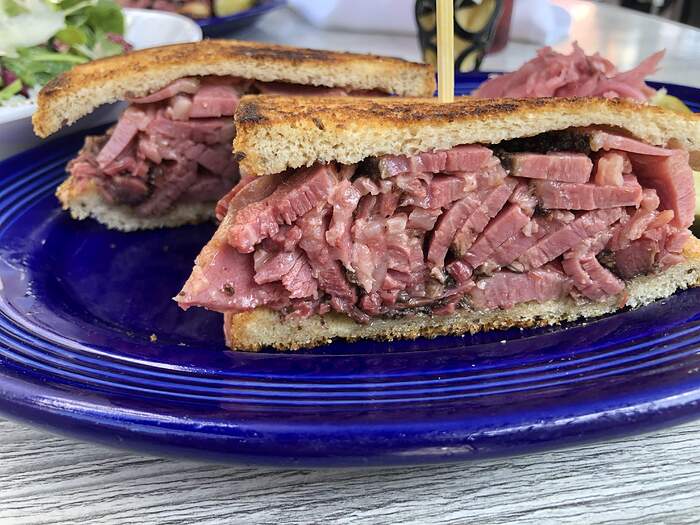 That’s funny because my daughters just LOVE Brad! They think he’s funny (“Wooter”) but mainly like his episodes relating to fermented stuff, which we do a lot of.

This is a better link to a dry brined pastrami. 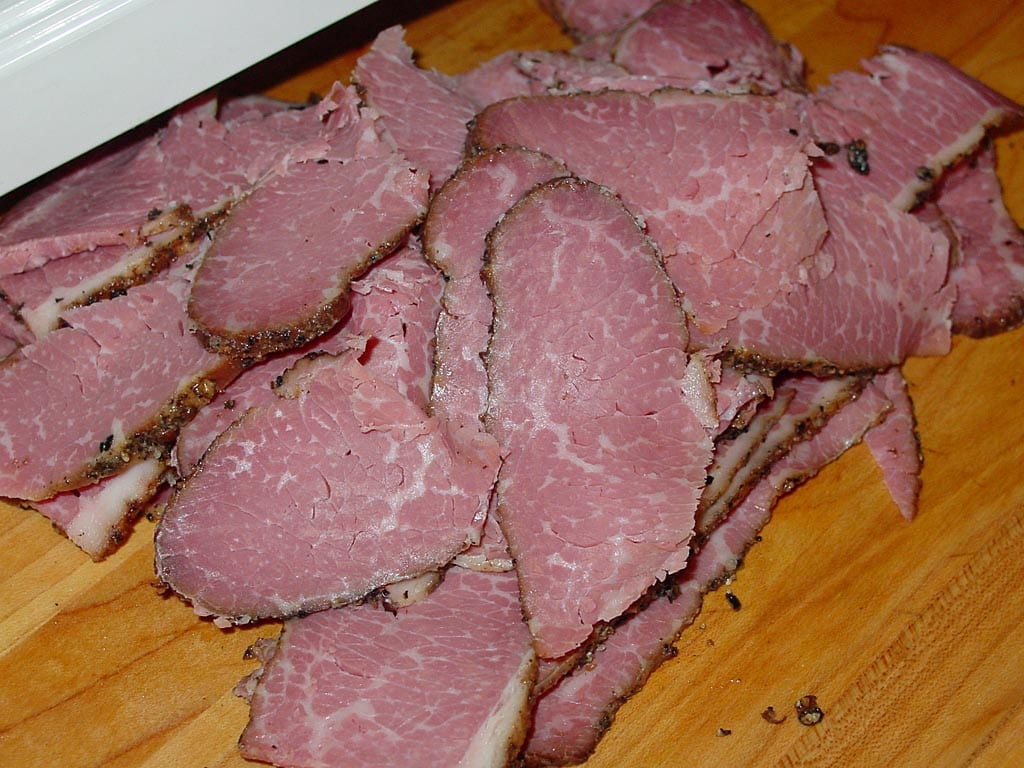 Make your own deli-style, dry-cured pastrami by curing a fresh brisket flat and smoking it in the Weber Smokey Mountain Cooker.

Poultry I always wet brine, and also pork loins and pork chops (although now that I’m typing this I’m wondering why

Serious Eats has a recipe I turn to over and over for dry brined “perfect pan seared pork chops”.

Apparently, Brad and Bon Appetit took a lot of flack for that episode - https://www.gawker.com/media/its-botulism-with-brad-leone-bon-appetit-testing-health-standards

It’s a superior product. It’d be too much to ask for the management to consider adding tongue sandwiches and whitefish salad (let alone a passable take on chopped liver) to the menu, considering it’s not a deli but in reality a serious Belgian beer joint with a serious hook for non-beer drinkers. And we’re thankful for the pastrami as it is – oh, we said that already.

By the way, the Akron burger gets rave reviews from those we know.

Turns out there was no concierge.

Back to the front desk; they had checked with their “engineers”, and now in-room dining for help, but none was forthcoming. Twice I was promised help with the refrigerator, but it did not happen.

I got the fridge I had to the forties Fahrenheit, and in addition, kept the pastrami on ice.

I happened to have a bubble wrap envelope for my Surface PC, and used it to keep my pastrami cool for the trip home. Who knew? MacGyver, and husband.

Oh thanks for the tip/warning about the chopped liver, I almost ordered it. The other weird thing (on top of them toasting the rye) is the menu doesn’t actually have just plain pastrami on rye, just one with swiss and you have to have them hold the swiss. The pastrami itself is solid though.

We’re probably being a bit unfair, because as much as we savor The Refuge’s pastrami, we can’t help but seeing the operation through deli-colored glasses, it being a sort of oasis in the Bay Area Jewish deli desert.