Do You Love Pastrami?

When I lived in So Cal, we would hit up Langer’s Deli for their pastrami on rye on the way to Dodger games, and smuggle them in under our jackets. It is simply the best pastrami sandwich I have ever had, and was one of the better things about going to a game.

Last Xmas I sent my brother a Langer’s pastrami kit via GoldBelly. He is a huge fan of pastrami, but has never been to Langer’s (and while I usually send him a fine bottle of tequila - I wanted to change it up last year).

I know there is a lot of stuff on GoldBelly that simply isn’t worth it, and this kit was $139! But it included two pounds of pastrami, a loaf of their rye, and a bottle of mustard. This equates to about 4+ sandwiches, which are about 22 bucks at their deli now-a-days. Plus I got a $25 discount on my first order… so not too bad with next day, cold pack shipping.

I was a bit dubious about the whole thing, but after discussing it with his wife and daughter they convinced me this would be a better option than just another bottle of tequila. They were right! Got a call from him the day after about how this was the best pastrami he’d ever had.

So if you love this stuff and don’t live in LA or NYC, this option is highly recommended.

I am in L.A. about another 36 hours and still don’t have a plan for getting there. I’m guessing delivery to the JW is less than Gold Belly to Nor Cal?

You are in the JW Marriott in DTLA? It’s just over a mile away according to Google maps, don’t think delivery would be necessary. Pretty quick car ride. There’s even a metro station nearby. Would probably be nice to eat there too, it has kind of an old-school diner feel. Disclaimer: I am not a LA resident

Anyway, Langer’s pastrami is definitely worth seeking out if you are in town, and especially since you are so close.

I love pastrami but don’t eat out too much - usually just on vacations, and then we’re hitting up seafood or local fare vs. sandwich type shops.

My teen son routinely comes home from school to a big bowl of cereal and two lunchmeat/cheese sandwiches, to sort of “warm up” for dinner 3 hours later.

He likes ham, turkey, beef lunchmeats (just mass market stuff like Hillshire Farm or Aldi’s brands) but one time I got him pastrami. He tasted it and ate the whole 8-oz package in 2 sandwiches. (Who can blame him - I like a lot of meat, too). Then wanted to know when I’d be buying more.

Well, that stuff’s expensive compared to turkey/ham/etc., so I set about doing it myself a lot cheaper by scrounging for recipes on the internet. Like a lot of things, I had a “craze phase” at first where I was making a 14-16 pound packer 2-3 times a month, now I’m more like once per quarter.

The Metro’s opening was a godsend for downtown workers who now could ride the one stop to Langer’s for lunch. Over the years we’ve received sandwich kit gifts from a couple famous (not LA’s Famous) delis. The senders’ kindness eclipsed the box’s contents when you have had the sandwich in the deli; it may be the same stuff, but it isn’t the same.

Thank you!
So far we have had no “quick car rides”. Even the drivers are commenting on it!

I am at a conference with a pretty firm lunch break.

Our family loves turkey pastrami. It has disappeared from our markets. Suply chain issues. We can wait them out.

I am at a conference with a pretty firm lunch break.

You can order online for delivery on their website from a variety delivery folk including Uber Eats. 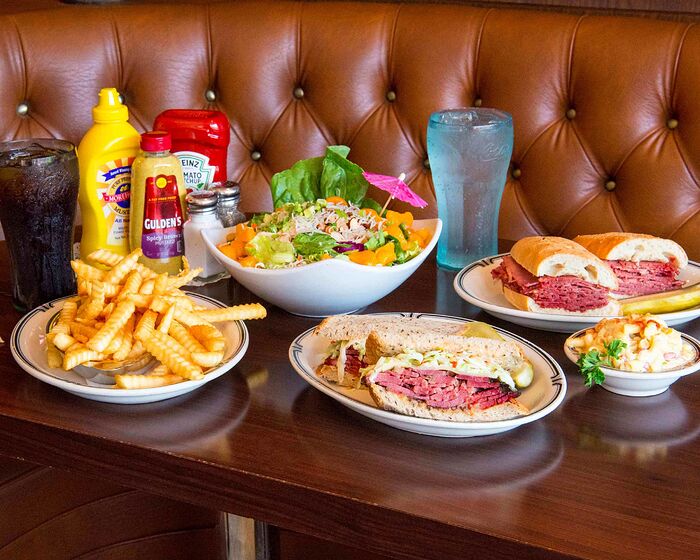 Use your Uber account to order delivery from Langer’s Delicatessen & Restaurant in Los Angeles. Browse the menu, view popular items, and track your order.

Looks like I can’t just order 5 pounds to go, “fatty”.

scrounging for recipes on the internet. Like a lot of things, I had a “craze phase” at first where I was making a 14-16 pound packer 2-3 times a month, now I’m more like once per quarter

Me too! I think my annual experiments were on Chowhound. Annual because I’d get the corned beef from St. Patrick’s day, and take it from there.

ETA Before that I started with a wet brine, but then started a dry brine recipe. I’d love to see what you have tried.

so I set about doing it myself

Do you corn your own beef? Or just start with purchased corned beef.

Looks like I can’t just order 5 pounds to go

Actually, you can… but it is $48/lb.! Which makes the kit I ordered for my brother (with the loaf of rye, mustard, and a pickle) seem pretty reasonable (if you can consider anyway that $48/lb for pastrami reasonable)!

Scott - When making pastrami, I’ve only corned/cured it myself. I’ve never been all that happy with commercially prepared corned beef anyway, but the main reason is I wanted to start as cheap as possible (but also with at least choice grade meat) so I just bought the packer, broke it down into flat/point, and proceeded to corn from there and then re-spice after corning for the pastrami step. I and one daughter are big fans of the point - although I do remove a bunch of the fat, it’s got so much marbling that it’s really my favorite. My son and another daughter prefer the less fatty flat and I only leave a scant 1/4 inch of the cap on it. The first time I made it, I made the kids pastrami Ruben sandwiches with homemade kraut on a marbled rye and they were like “why haven’t you made this before!??”

Also @shrinkrap - I’ve dry brined beef steaks and roasts but for corning I’ve only done it wet. I’m not sure how well the pickling spice mixture would get into it during the cure if I tried to do it as a dry brine.

Poultry I always wet brine, and also pork loins and pork chops (although now that I’m typing this I’m wondering why it is that I dry brine steaks, but wet brine the pork - seems a bit inconsistent… oh well, hobgoblins and all that!).

Edit regarding price. When I first started several years ago I could get a 16 pound packer at $7/lb that would net out about 12.5 pounds after trimming. I kept track of weight through the first time I processed it (lot of water loss in cooking) and I’m pretty fuzzy on it by now, but if I recall correctly I netted out about $11/lb. Now brisket is $12/lb here so it’d be closer to $19/lb.

Edit2 - I ran into this recipe from Tori Avey to do the pastrami without needing to smoke it. But her recipe has changed. A few years ago there was some controversy in the comments regarding amount of Prague1, where she was wrong and the commenter was right, based on my own calculations. I’m glad I read comments first and made it otherwise per instructions and it was really quite good (don’t tell my Texan friends).

Turns out she had gotten the recipe 2nd hand and checked back with the originator, who assured her it was right. But it wasn’t, as she eventually learned after consulting a foodie professor. But beside changing the amount or Prague #1 they’ve made other alterations. I haven’t followed her exact recipe since it was changed. 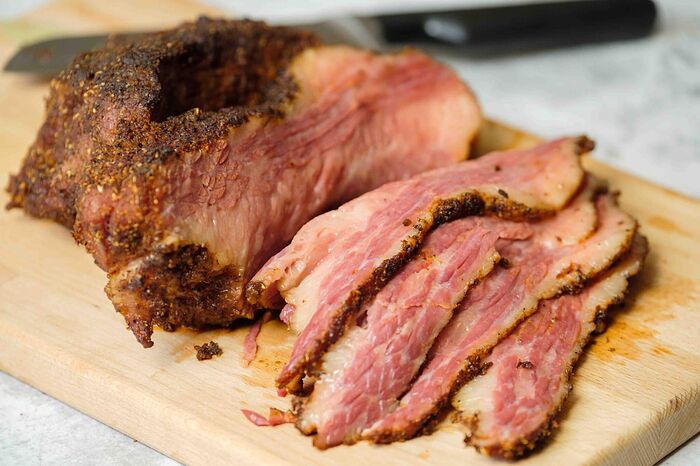 Learn to make delicious deli-quality pastrami at home with this simple and tasty recipe, adapted from The Artisan Jewish Deli at Home cookbook.

I got the original pickling spice recipe from Guga because Tori’s recipe just says “use pickling spice” and I didn’t have any on-hand, but had all the basic ingredients. I just needed to know how they went together.

Guga’s a bit of a goofball (tending toward extreme “experiments” like where he put a brisket in sous vide for a month) but I’ve learned quite a bit from him, too. I’ve only corned/cured it myself

Good for you. I wish I had the kitchen gear/space/patience to do this myself, but instead I just go the back way down the hill by the lake to a Holiday market to get Boar’s Head (which is edible, where the Safeway’s deli brand is not).

I’m really quite happy to eat anything Boar’s Head as long as someone else is buying!

The stuff that fills the meat cases here in March is “Murphy & David”. Not a big fan but my MIL buys it and of course I will eat it enthusiastically (e.g., “I really enjoy corned beef”) if that’s what she’s invited us over for.

The only pastrami I will tolerate is from The Hat.