Sup HOs! It’s that time of the year again…when corned beef is cheap and I buy way too much of it and get so tired of it that I never touch it again for another year.

Anyone have anything unusual they do with corned beef? I was thinking of maybe doing like a creamy soup or pasta dish with it. Also I have a feeling it might be good with a little Jamaican inspiration - maybe putting a habanero thyme relish on it or something.

What are your favorite corned beef dishes?

Pretty uncreative here with corned beef. Although, we do corn our own. I like it with red potatoes, cabbage & horseradish cream or leftover as corned beef hash.

I have a few in the freezer from last year. My go to thing is to desalinate, season and smoke them for pastrami

Well I’m a mick and can’t really answer this lol. We are known for liquor and not food

Tonight I went to tst BBQ and they have some SMOKED corned beef specials. I’m down to try some weekend specials. @joonjoon @NotJrvedivici @gcaggiano
Let me know. They have some smoked corn beef specials and smoked ruebens with bacon cabbage …sounds good.

On a side topic, I am not calling anyone out but it would cool to see someone tackle this 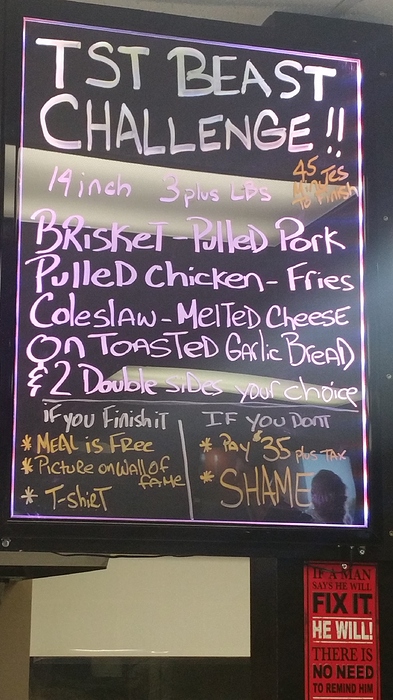 Has anyone completed the challenge? I couldn’t come close these days.

No sir. I was there last night and the owner said no one has done it yet. I think it’s only a month or two old but I sure would like to get my picture up on the wall. I just can’t eat like I used to. The kicker is you need to tank the sandwich and two double sides.

My theory is to go with light sides. I think the pickles and slaw would be the way to go. Something like mac n cheese would probably just be like cement in your stomach. Their “fire and ice” pickles are awesome.

I’ll keep you posted. I might be able to get my uncle to give it a go.

This Reuben pizza from Sara Moulton is quite unique and tasty. It is a bit rich, though!

Great topic! I cooked a 3.5 lb brisket flat last weekend. We ate it for three meals.

I first washed and soaked it to leach some of the salt. Two changes of water over four hours was enough. I then trimmed and cooked it in a covered Dutch Oven with the included seasoning packet, one dried chipotle pepper and about a cup of water for three hours in a 250’F oven. I also liberally covered the top of the meat with fresh ground black pepper.

I let it cool and refrigerated it for a few hours so I could cut it thinly and served the first meal on seeded rye with Coarse German Mustard and homemade slaw.

A couple of days later I had some more, thinly sliced on seeded rye with Colman Mustard, sliced Monterrey Jack cheese and homemade slaw.

Then to finish it off, I had it thinly sliced on seeded rye with Colman Mustard, sliced Monterrey Jack cheese. Then I warmed it slightly just to begin to melt the cheese before I added homemade slaw.

So as you can see, the opportunities for variation are virtually endless!

Seriously tho’, it was excellent and a good corned beef sandwich is one of my favorite things.

While I wouldn’t even consider trying to tackle that bbq challenge above, I gotta say for $35 it doesn’t look like a bad deal. I might buy it, sit there and eat a light meal and pack the rest to go. It would feed me several times over.

A local chef makes a pho with corned beef, and it works beautifully. My comment on the dish from another thread:

Pho bo chua- corned beef brisket, green onion, onion in a “sour” beef broth over rice noodles. Its the chef’s winning dish on a Food Network show. I didn’t taste much sourness in the broth, hence the quote. But the broth tasted strongly herbal and minty. Can someone who has a better command of herbs tell me what that herb was in the broth? Not tarragon but had a somewhat similar refreshing profile that tasted sweet, grassy, and a little like anise. I believe its his wife, and she said that dish was not very Vietnamese. But its still a very tasty adapted bowl of pho. 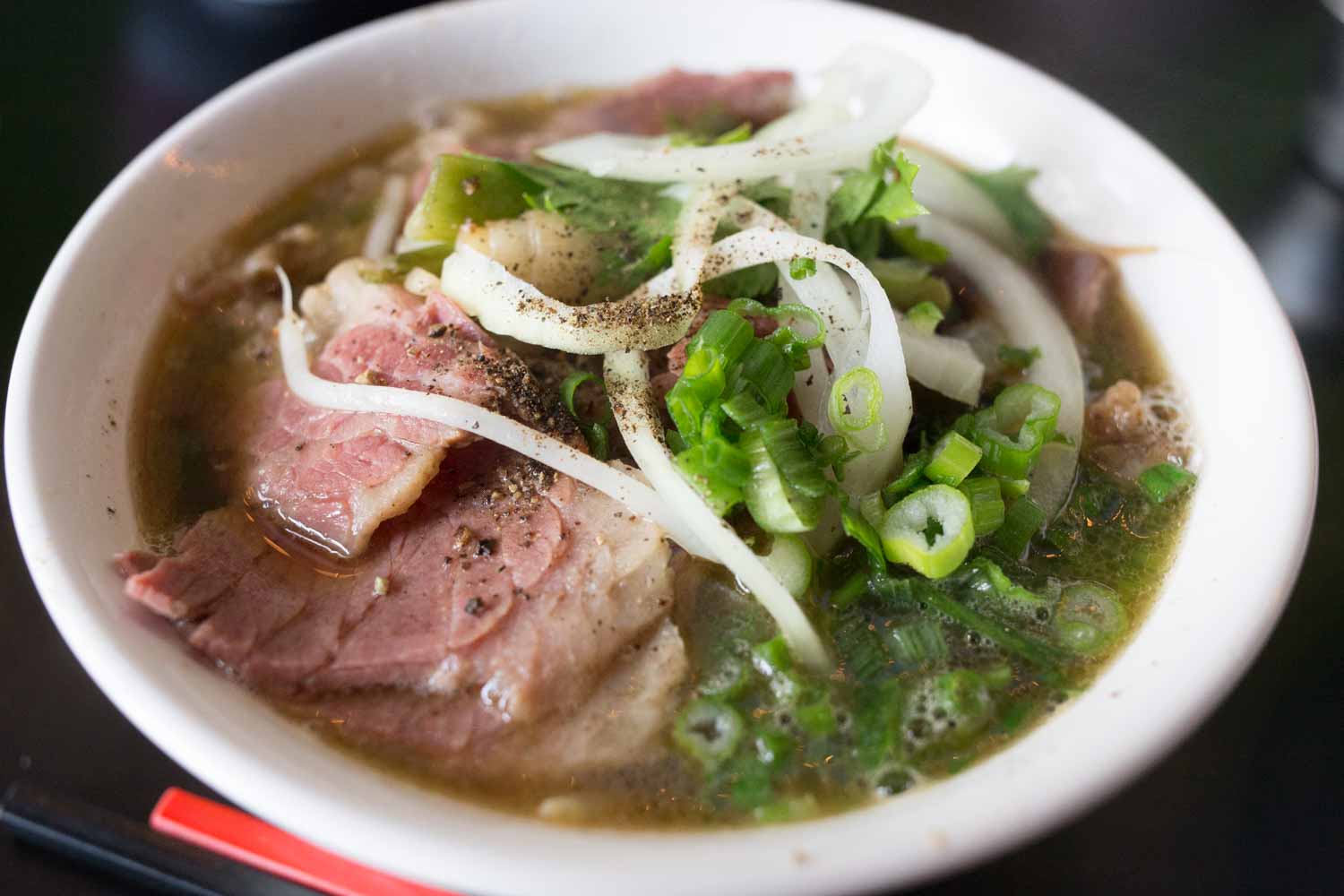 It would probably make a good addition to some sturdy carby soups like a potato chowder, or as a topping for congee- or now i think about it risotto or polenta.
And there are tons of recipes for versions of a rueben- as a sandwich, dip, dumpling, fritter, even a quesadilla (??).
I feel like it would play well with russian and eastern european flavors, maybe added to a hot borscht or with potato as a pierogi filling…

What are your favorite corned beef dishes?

Neat. I eat it straight with no regret.

I’ve been making this recipe for 20 or 30 years, it’s not a family secret; I got it out of the Pennysaver. People seem to love it and do ask for the recipe every time.

I just made my annual pan full last night, and was reminded how easy and how good it is

Nice way to clean out the fridge too!

Process all, bit by bit, until you have a smooth thick paste. Place in a shallow pan.
Cook in 350 degree oven for 15-20 minutes, then serve hot with crackers or cocktail rye.

Fried rice is the first thing that jumps to mind. I would crisp up chunks of the corned beef, add cabbage and carrots, then egg, but no soy sauce. The meat is salty enough.

If you rinse off some of the seasonings, you can quick fry with a combination of taco sauce, ketchup and gochujang, then serve on rice, rice noodles, or roll it up into a burrito.

Oh, another fun thought would be Danny Bowien’s Kung Pao Pastrami, but subbing corned beef for pastrami. I’ve only had the pastrami dish at the restaurant, but it was terrific. 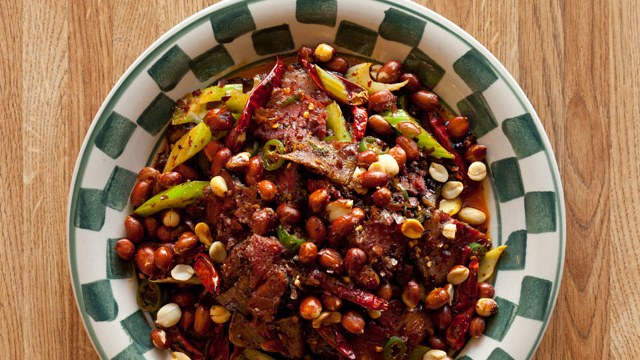 Bunkeroo! Corned beef is not cheap here! It is, however, one of the few times you can get it in store.

Pastrami tonight made from a prepared corned beef picked up when they were on sale around St Patty’s day. Leached of a fair amount of salt and seasoned with pastrami spices and smoked till tender. This was from a point cut. 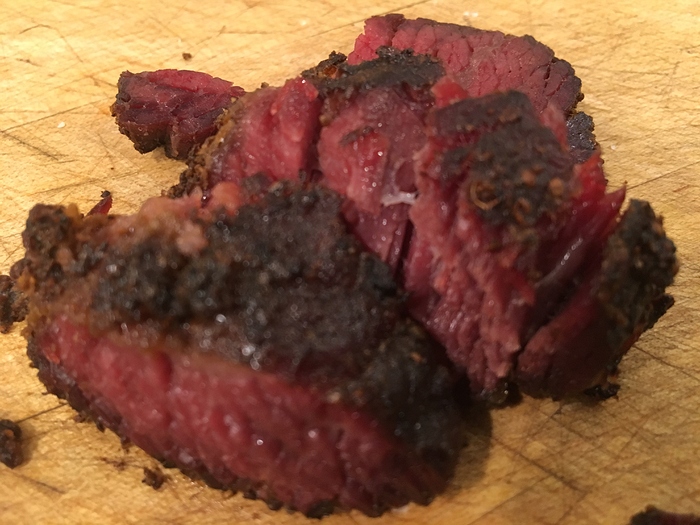 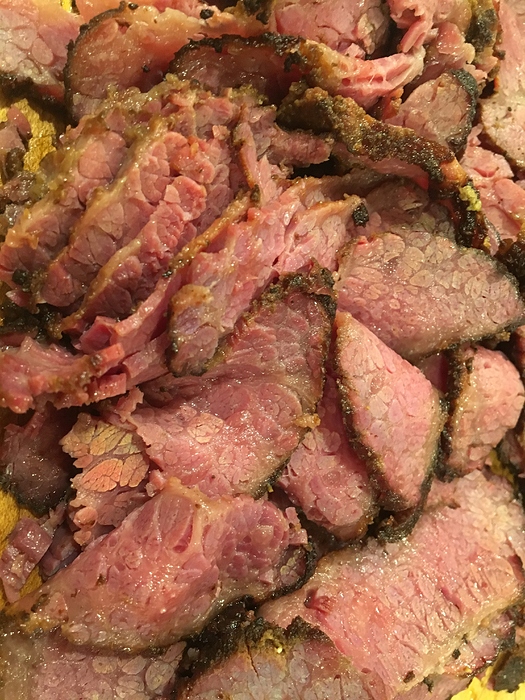 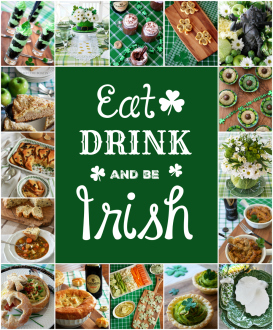 Eat, Drink and Be Irish St. Patrick’s Day Round Up!

Corned beef or pastrami – that is the real question.

Joon I bet a late night cheese steak would be good. I think whiz would work well.