This may be silly / obvious to others, but the proverbial lightbulb went off above my head, so here goes.

I made chicken soup from a package of legs last weekend, and for a change I left the skin on (out of sheer laziness) - I turn it into “chips” in the oven as the cook’s treat.

The resulting soup is much more gelatinous than usual.

Now this is perhaps obvious to others because - skin - collagen - gelatin - duh.

But it made me think, why don’t I always leave the skin on? I’m not cooking at a fancy french restaurant where I need a perfectly clear broth… And why don’t recipes call for the skin to be left on as a standard instruction? Fat can always be skimmed / lifted off when cold.

Do you leave the skin on when making soup? Reasons?

Yes, I leave it on. I save the congealed fat atop the cooled stock and use it like schmaltz. (Only rarely do I pour fat off of cooked meat and then only when saving it for future sauteed food.) I had no idea that there are recipes which call for skin to be removed before stockmaking. I like to make cracklings/gribenes, too. Consomme recipes, perhaps? But IMO, consomme is a foolish dish. It purposely gets rid of most of the tasty stuff.

I’m a skin-on man, myself, for the reasons you mention, for soups as well as for sauced dishes, such as curries (where you get a very rich mouthfeel as a result). If I know my guests are averse to skin, I’ll take the skins off before serving (talking about curries here).

For soup, I’ll often very gently sub-simmer chicken thighs with aromatics, till the flesh has just turned silky, then remove the chicken pieces and separate the flesh from the skin and bones. I’ll return the skin and bones to the pot and continue to simmer, reserving the meat to be diced or shredded and added back at the end (with, if that’s where I’m heading that day, very fine threads of ginger).

And speaking of crisp skin, I’ve found rubbing chicken thighs with cayenne and salt, both under the skin and lightly over it, then convection roasting in a toaster oven skin-up on high heat (I can get 480 out of my Breville, but 450 works as well) gives you perfectly cooked thighs in about 30 to 35 minutes under a dome of crisp, chip-like skin. No opening the oven door[1], no flipping. (Occasionally, since all chicken thighs are not created equally fatty[2], you may need to broil at the end for 2 or 3 minutes.)

[1] If your oven has hot spots, or is not convection, you may need to rotate the pan 180 degrees after about 20 minutes.

[2] And speaking fatty, a bed of sliced potatoes under the chicken is a good fat trap. You can always throw away the cayenne-chicken-fat-infused potatoes at the end – if you’re nuts – or eat them – if you’re sane.

But IMO, consomme is a foolish dish. It purposely gets rid of most of the tasty stuff.

You said it! I always make stock skin-on.

I put everything in, skin, bones … Skim the fat off if too greasy. But I like a bit fat in vegetables soup. 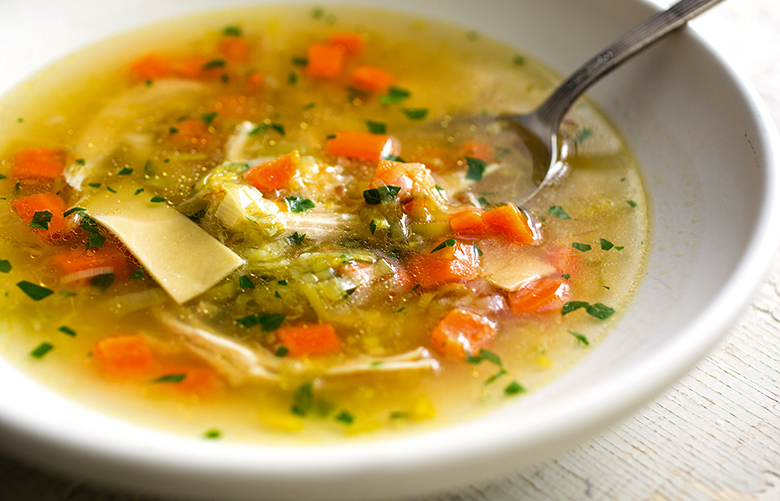 The key to the best chicken soup from scratch? Ditch the old-world recipes

Start with a whole chicken, not a carcass like grandma taught you. And from there on, it’s a pretty painless process.

Chicken skin is not pure fat, as many people seem to believe,” said Jennifer McLagan, the author of cookbooks including “Fat” and “Bones.” It’s also rich in collagen, which gives the soup its silky unctuousness. In the absence of parts like feet and necks, she said, the skin provides most of the collagen in modern recipes and is, therefore, crucial to the soup.

Using the entire chicken, which once would have seemed impossibly extravagant for soup, provides the perfect balance of fat and flavor. It doesn’t need to be cooked for very long, as the plentiful skin, meat and collagen quickly yield to the heat. That shorter cooking keeps the broth clear, so long as the pot is not allowed to boil.

I couldn’t really say because I have always included the skin when making stock. That said I thought the bones and connective tissue, joints, etc were the main source of collagen.

FWIW, lately I’ve been making a fair amount of stock because we’ve gotten in the habit of picking up a Costco rotisserie chicken every time we shop there. I have developed a method to apply each time. We eat the legs for dinner when we get the thing home. Then I strip off as much meat as possible (skinless and boneless) and put it in the fridge for a meal of soup and a meal of chicken pie and/or chicken salad in the coming days (three/four meals for two so far from one $4.99 chicken). Now the important part – all the skin and bones and bits of meat (and the juice that leaked out of the chicken) go in the soup pot and get made into stock. No additions – it’s fine as is. I strain that and put the stock in the fridge for the soup and the pie and whatever else. Then by hand I pick off all the remaining skin, meat, and other non-bone and put it aside to add to the dogs’ food in coming days. Probably get 3 cups at least. Finally just the bones get tossed. Add a few veggies and so forth for the soup and pie, and we (and the dogs) get a lot of eating out of one chicken.

When using a whole chicken, you can pull off the breast halves and use them for sandwiches or salads, returning their skin to the pot. They probably contribute less to the stock than does the rest of the bird, and it’s easy to know when to do this, because they will easily separate from the carcass when they are done. When I had a bunch of pedigreed show cats, I boiled 12# turkeys and added everything but the bones to their commercial cat food. Once, when I was out of sandwich fixings for my bag lunch, I pulled off a boiled breast half. As the meat hadn’t been seasoned, I expected it to be boring, but it was juicy and delicious. Thereafter, I always took my cut of the deal!

Do you leave the skin on when making soup? Reasons?

Mostly because I can’t think of a reason to take it off, and can think of potential reasons leave it on.

The key to the best chicken soup from scratch? Ditch the old-world recipes

That’s funny to me as, like you, I always use the whole chicken. And why do I do that? Because that’s how my grandmother did it and it gives you such a better soup!
I guess everything old is new again

When I had a bunch of pedigreed show cats, I boiled 12# turkeys and added everything but the bones to their commercial cat food.

Similar experience here! I have a houseful of abbysinians and they do not do well on straight canned food. So I crockpot plain chicken breasts (bone in, skin on) and give them the shredded meat as well. One day I needed a fast lunch so I grabbed some of the chicken and made a sandwich. Now it is no longer “Cat chicken” it’s just chicken!

Yes,I do exactly the same as you do with costco chicken and usually making chick pot pie with some of meat/vegs and hubby making chick salad sandwich…a real bang for your buck !

Ye, who serve your cats these homemade foods: do you boil your chicken/turkey plain, or can your cats handle the aromas or tastes of peppercorns, bay leaves, onions, carrots etc.? What about salt?

So I crockpot plain chicken breasts (bone in, skin on) and give them the shredded meat as well.

Interestingly, I never leave the skin on for indian preparations. Bone-in chicken always, but never skin-on.

I wonder if it’s because the flavors would have a harder time penetrating the flesh through the skin, or because the skin was removed as part of the prep process at the butcher before the chicken was brought home as some hygiene thing. Hmm. Have to ask.

No seasoning. Alliums present a slight risk of anemia. Other seasonings might be okay but since the purpose is feeding pets, not people, why risk problems?

Interestingly, I never leave the skin on for indian preparations. Bone-in chicken always, but never skin-on.

I wonder if it’s because the flavors would have a harder time penetrating the flesh through the skin, or because the skin was removed as part of the prep process at the butcher before the chicken was brought home as some hygiene thing. Hmm. Have to ask.

Traditionally, I think, the skin was always removed in food I’ve had in India. I’ve come lately to leaving the skin on, for the reasons I mentioned. But, it does take a bit of work to get the spices to penetrate: I make slits and I marinate the chicken in (say) yoghurt and various spices, talking care to massage the marinade onto the flesh under the skin and into the slits.

Thanks. I asked partly because you and @Happybaker use the turkey, etc., also for your own consumption, and for that purpose flavoring an otherwise bland protein might seem in order. In a sandwich, of course you can always dress things up with mayo, mustard, whatever.

But, it does take a bit of work to get the spices to penetrate: I

Maybe stock vs soup vs sandwich is a different question.

I rarely if ever marinate chicken for curries, only kababs.

Though now I’m thinking about it, the sauce should get the same texture benefit if the skin was removed from the meat but added to the pot while the curry cooked…

@fooddabbler - @greygarious is right. I’ve been told no salt on regular food. Maybe a bit of seasoned cooked chicken as a huge treat (I’m talking about you KFC, the magical smell that can get most sick cats to eat!) but for their everyday chicken - no seasoning. Oddly enough, if it’s cooked on the bone it is surprisingly flavorful without. And then yes, you can dress it up with mayo etc, or toss it with a sauce. It makes a lovely sweet chicken salad.
@naf - when I had an abby that had horrific tummy troubles, couldn’t handle any canned food, I ended up feeing him raw chicken and it truly did save his life. I did it for eight years and it was amazing. But? A lot of work (had to mix in bone meal etc.). With three cats, who could handle some canned but not all I thought “Why not try the easier thing first?” Added cooked chicken breast, they loved it and their tummies were fine.
Fun fact to know and tell - they will not eat the chicken left over from when I make chicken soup. I guess too much of the “chicken-ness” has been cooked out into the broth!