I made some telera rolls today

They look amazing - as does the resulting meal using them!

Last night’s side to chicken and rice: air fried tostones. No, not as good as actually frying then but still crisp and satisfying. 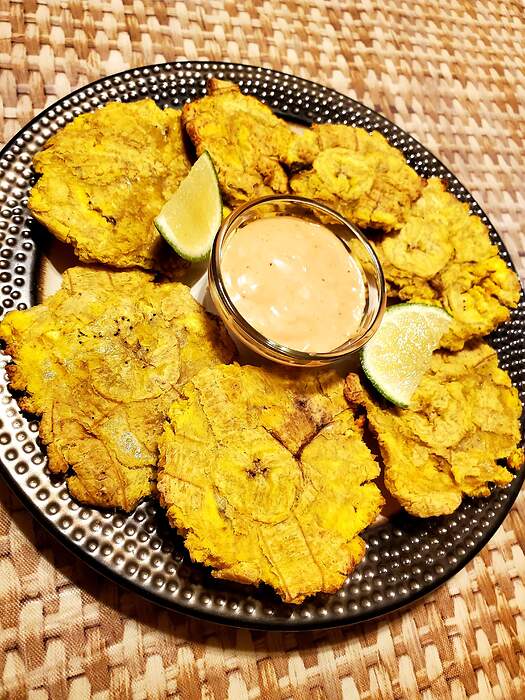 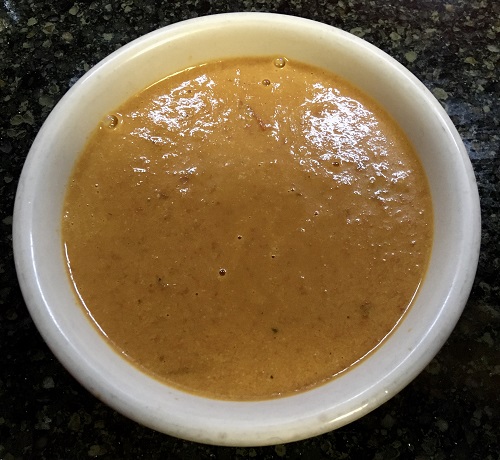 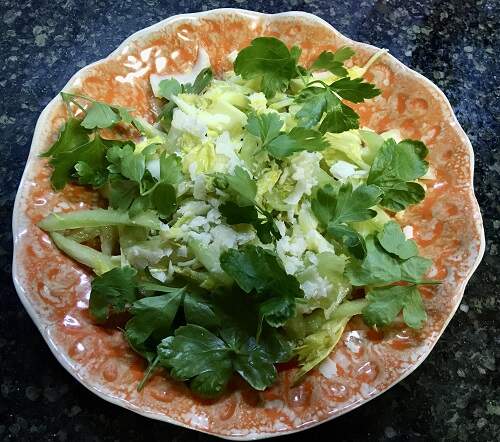 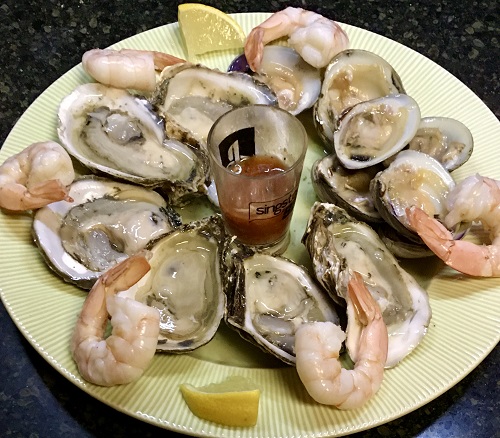 Cacio e pepe and roasted cauliflower. Messed up the pasta a bit because I was on the phone, but pasta, cheese, and pepper will taste good even if they aren’t put together exactly as intended.

Also a good break from my chicken curry marathon 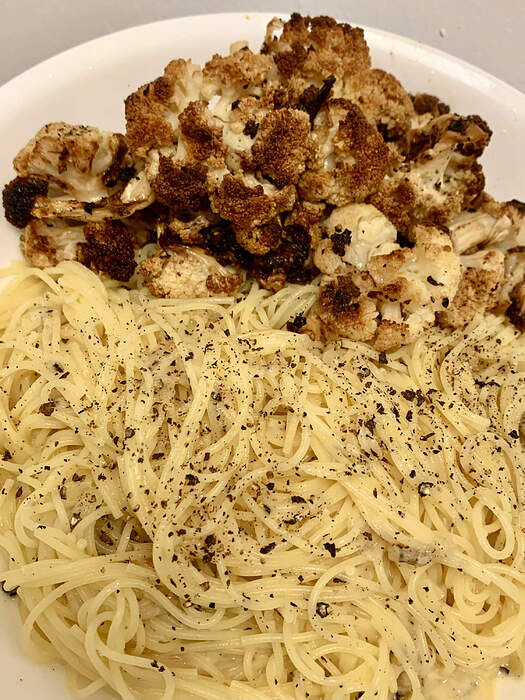 Not in the mood to cook,

But you sure did!

Damn that looks so good. I’ve been craving veggies after spending a week in Lisboa, and that cauli is calling my name. So is the pasta, tho

Finished up the brown rice congee with shiitakes and greens. Added roasted green beans that needed to be used, along with the last of the pickled cucumbers, some roasted peanuts, and cilantro.

I think this balances the triple decker grilled cheese I had for lunch! 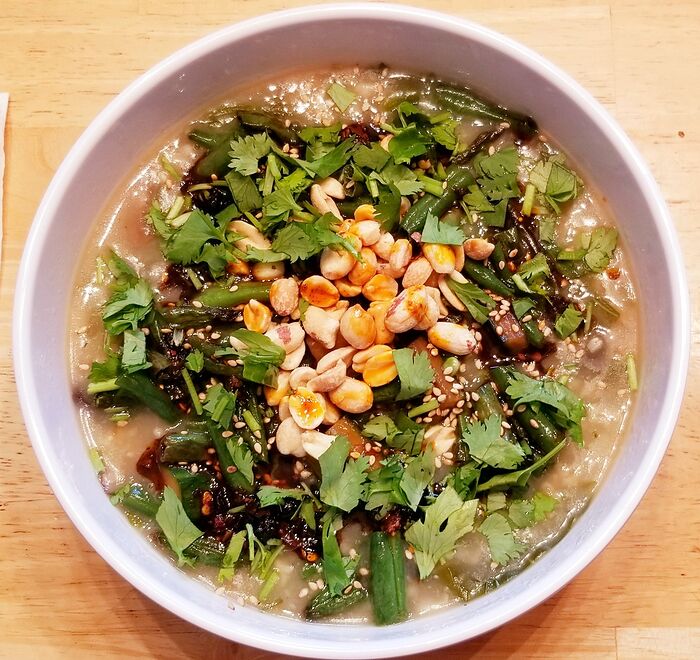 BF made us a late afternoon snack called Spam Musubi (Spam, sticky rice, seaweed), a Japanese-American creation that supposedly dates back to World War II and America’s occupation of Hawaii and/or Guam. Other sources say it was born out of the Japanese internment camps. Either way, this stuff is currently very popular. The overall taste is an interesting one. I don’t think either of us would rush to eat this again but it was far from bad. The flavor is surprisingly bitter, and of course, very salty. One “sandwich” was enough. 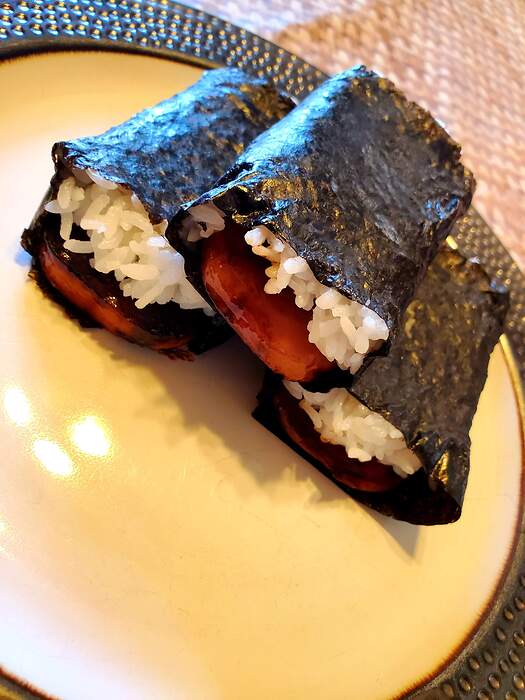 We went to the Asian AND and Indian markets today. Man, serious damage. I have third degree burns in my upper thigh area where my wallet rests in my jean pocket. I can’t even list all that we bought, three ingredients above notwithstanding.

Drinks outside currently while waiting for, you guessed it, Chinese delivery.

I made the BF a blackberry-mint smash substituting White Claw raspberry for club soda and skipping the Chambord floater. There was still Bacardi involved.

As for me, a BEEFEATER ROCKS. I’ve always loved gin but found it difficult to sip it alone on the rocks. But in the last few weeks, I’ve been trying to appreciate the flavor of gin without the addition of vermouth (which I normally add not even a splash to). 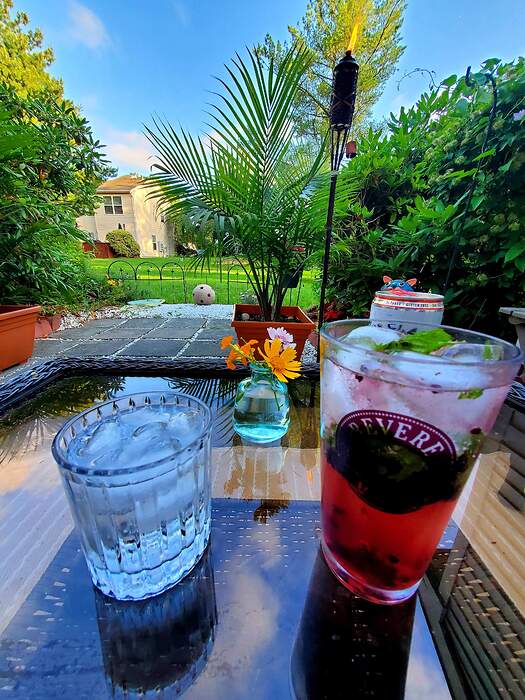 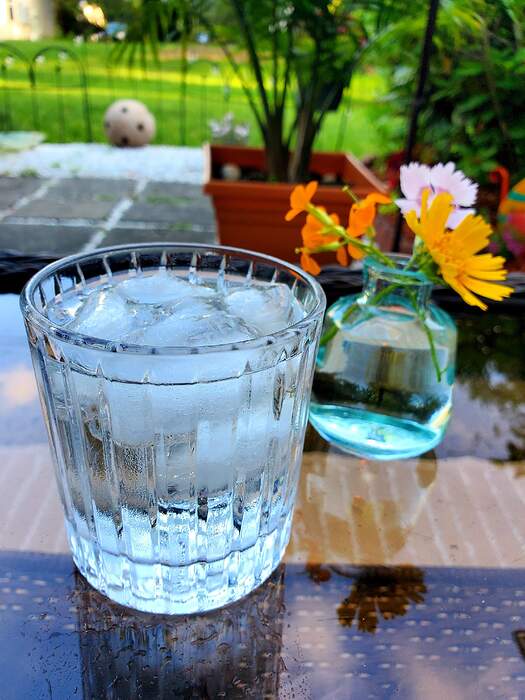 Over 90 degrees F. again today, so a minimal-cooking main dish salad was WFD. A variation of#13 from this article of 25 ideas.
" Grilled cheese salad: Grilled cheese sandwiches slightly cooled and cut into bite-sized squares, then mixed with greens and chopped Granny Smith apples and/or fresh figs when in season. Dressing: Vinaigrette made with apple cider or sherry vinegar."

Greens were a combo of iceberg lettuce & spinach. Apples were Granny Smith and Pink Lady. Garnished with a generous amount of shredded rotisserie chicken as well as the grilled cheddar cheese on whole wheat crouton-squares. Dressing was added at table to each portion - choice of commercial creamy poppyseed or honey mustard.

Rigatoni alla carbonara, with guanciale from the Fatted Calf in SF 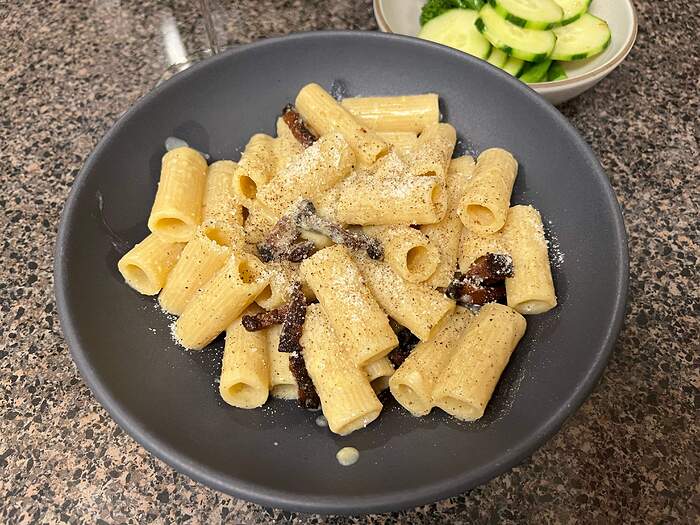 with broccolini and cucumber 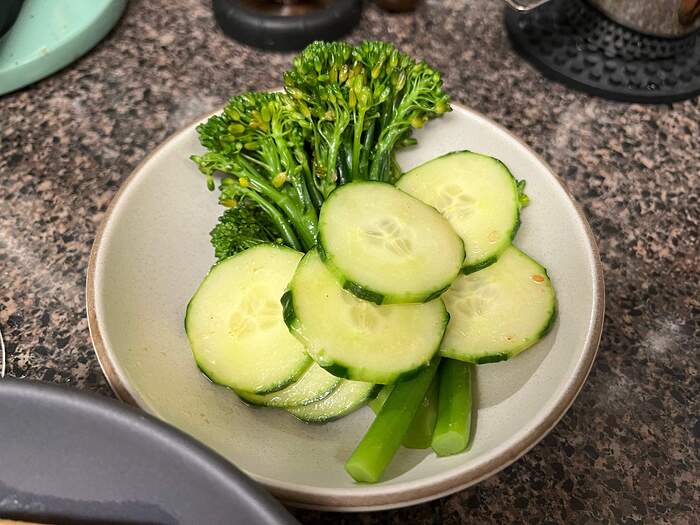 washed down with a nice natural chenin blanc 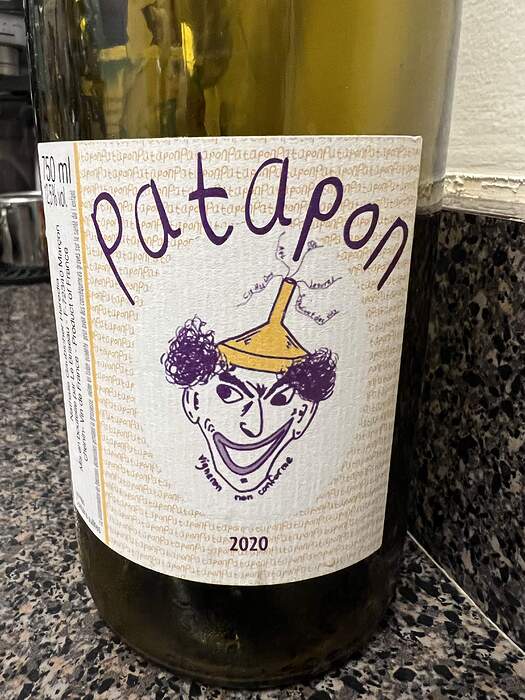 As for me, a BEEFEATER ROCKS.

Huzzah! Lots of rocks, swirl,swirl, swirl. Makes it icy cold and smooths it out.

It’s hard to see from your pic what rice did you use (sticky vs short grain/sushi)and what sauces and spices ? Spam musubi should be bitter but more a mix of savory and sweet

Your drinks look awesome! Yay you! (And your very happy shopping.)

I am sorry that your spam musubi’s didn’t work out. I adore them! But I use medium grain rice (which is sweet) so maybe that offsets any bitterness…? 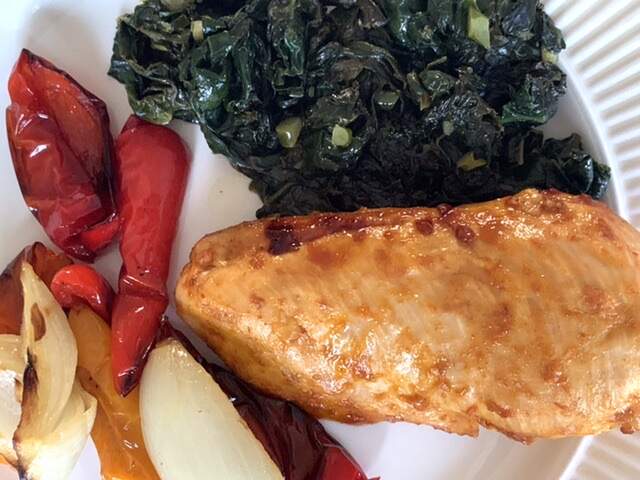 My cooking has been intermittent in recent weeks. Now that summer CSA season is here at last, it’s time to get more regular so that the vegetables don’t get too far ahead of me.

For dinner last night, made a Corn Tortilla Stack made of leftover pinto beans, chopped onion, salsa, and a trio of cheddars. 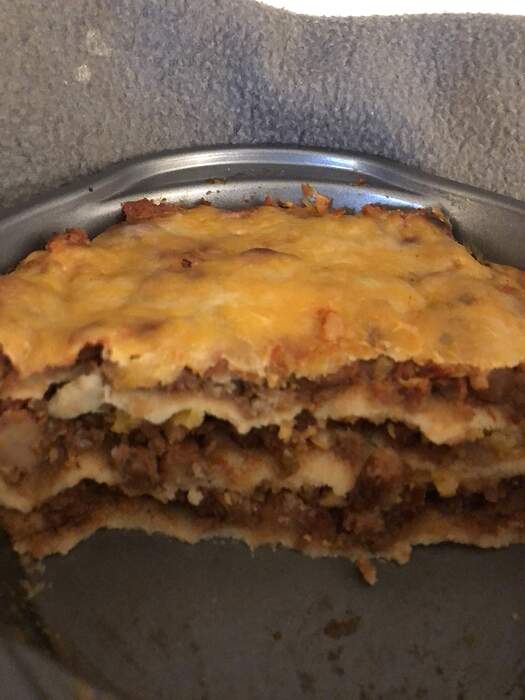 Tough day all around.
Work and life.

Not all that hungry, but…
I had steak tips.

Cooked them in a fry pan with oil and s/p. Ballymaloe steak sauce on top. A little more rare than I like, but I can deal.

Baby potatoes roasted in the convection oven with oil, s/p.

Asparagus steamed, and butter and s/p after plating. 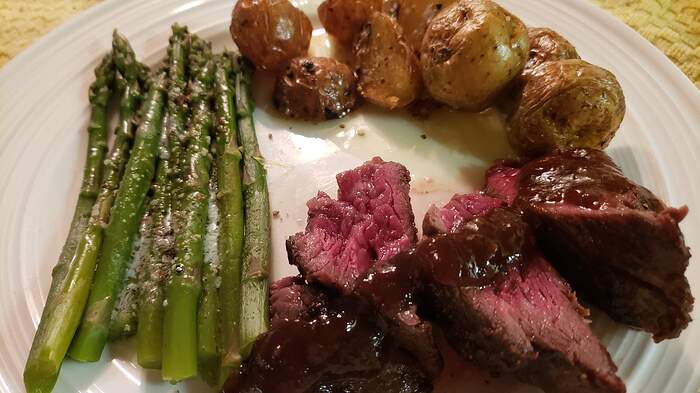 Sticky short grain. And after he seared the spam he added (I think) dark soy sauce and a few other items.

The Sprout made a mushroom risotto for dinner. It was really good. She needs to make dinner more often. 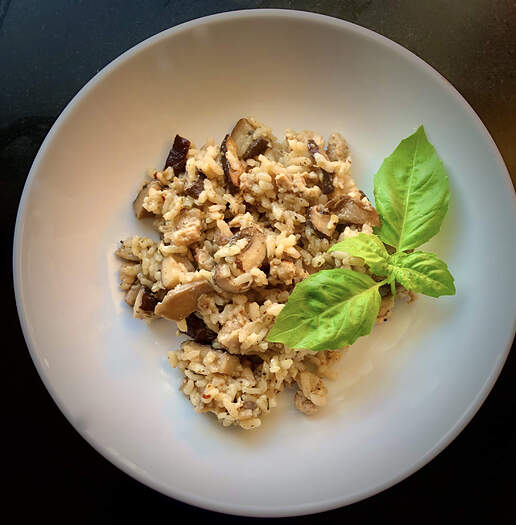 I love this idea of a grilled cheese salad - thank you for posting!

I think I might add dried cranberries to the grilled cheese s’wich.