Hearts, candy, and flowers if you’re in to that sort of stuff.

The rest of you get to ignore it all if you’re not in to it OR you live in sunny, warm climes. You are lucky ducks if you have warm weather!

So what’s on your February Food Map? For many, it’ll be warming braises, stews, soups, roasts. For others, think freshly caught fish, tacos from a local food truck on the beach…does it really matter, as long as it’s good food in good company?

So make February what you need it to be. And if you have a honey

to snuggle up with, whether it’s in cold or warm weather - remember that “I Love You” should be said MORE than on a single day of the year!

I was just about to ask where the February version was!

Sorry - work got in the way this morning! Stupeyheaded work. :::grumble, grumble:::

(And I hadn’t written up a Notes version of it last night!)

Nothing to be sorry about!

Not bad. Sauce could have been a bit thinner. 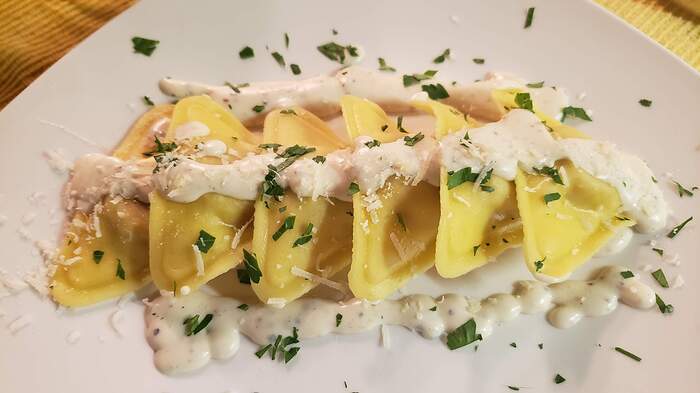 Your plating is outstanding! Sauce looks yum too. Likewise, I am a fan of TJ’s butternut squash ravs.

Your plating is outstanding! Sauce looks yum too.

These triangle ravs demanded some interesting plating. LOL. And the sauce tasted good, but I definitely should have thinned it out more with some hot water. But it had a really nice bite with the amount of black pepper I added.

Quickie tonight - TJ’s gyro slices crisped up and folded into a toasted ww tortilla with sour cream, harissa, tomatoes, and cucumber. I added a few pickle slices just because. Reposting here since I added to the wrong discussion originally. 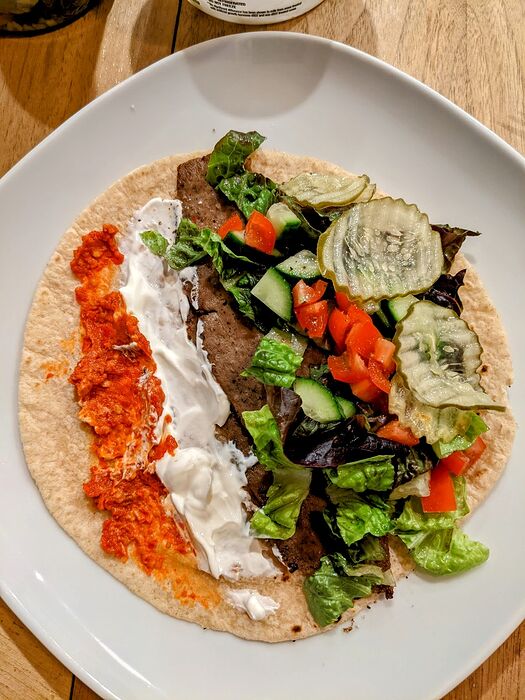 A few hours before dinner I had some TJ’s quinoa-stuffed dolmas, which were better than the original!

So far, apple and fennel slaw 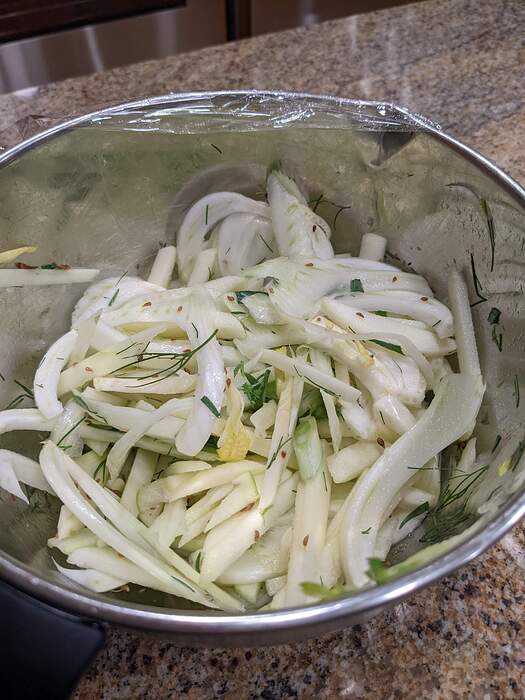 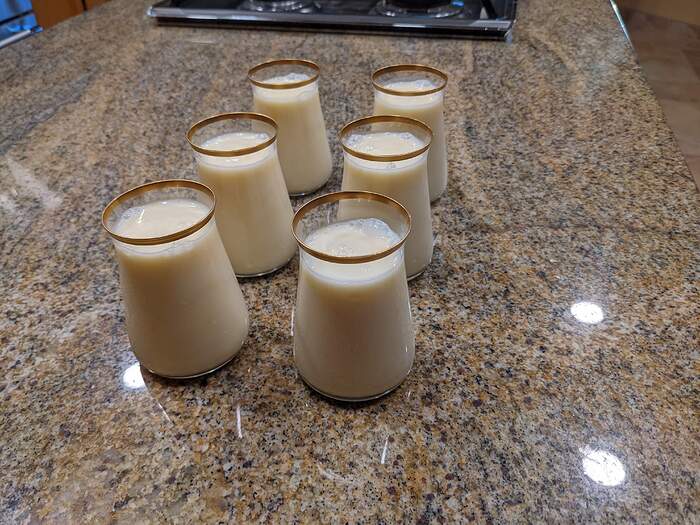 There will probably be store bought sausage. 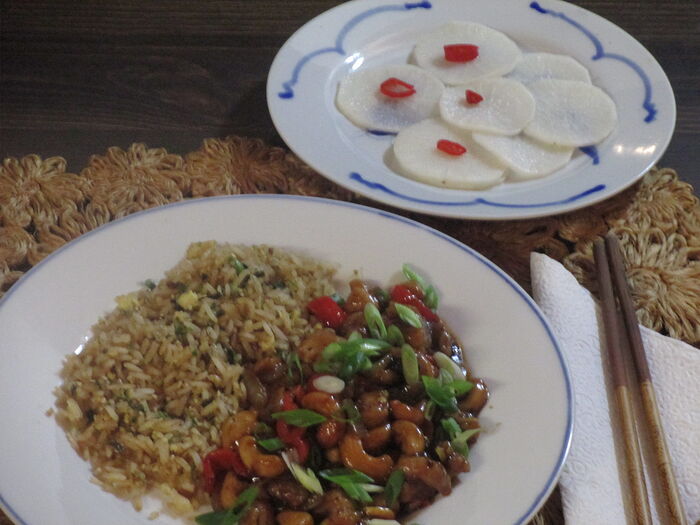 My daughter shared this from her latest place in New York; Back in Brooklyn, steps from where her dad lived. 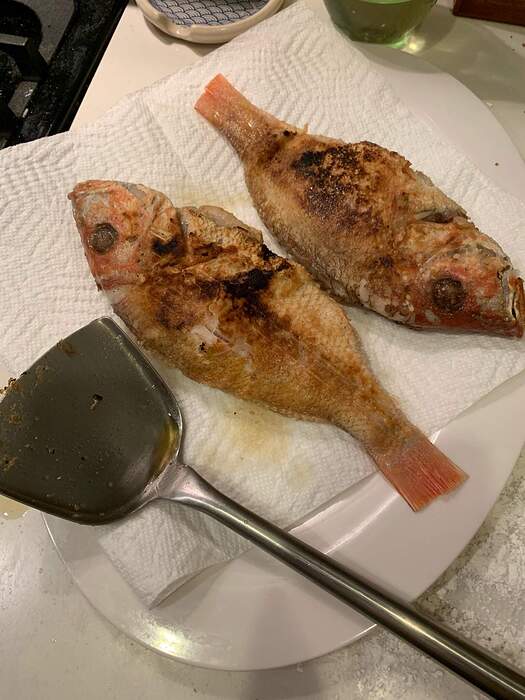 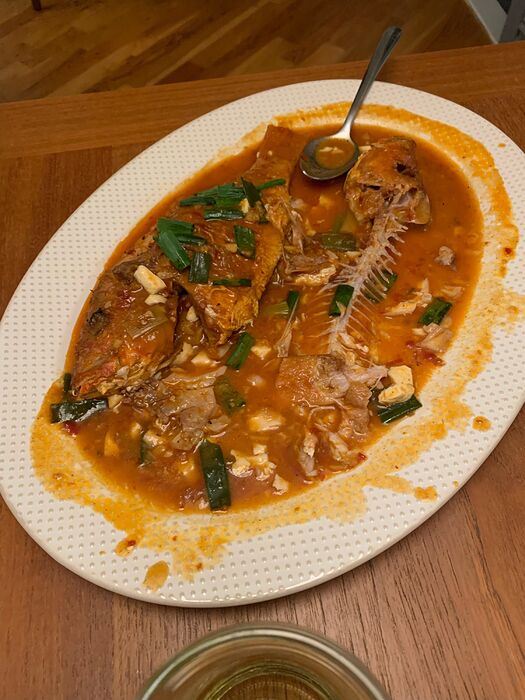 Went to Barcelona tonight (sigh) - Tortilla de patata with bacon (because BF), garbanzos y espinacas (with buttery toasted breadcrumbs, plenty of pimenton, garlic, and Jerez sherry vinegar), and the BF’s champiñones - simply button shrooms, butter, s&p, and Oloroso sherry - so fricken good! I also whipped up a pimenton aioli to go with the tortilla. I added fresh slices of garlic to the tortilla too, first time, but you really couldn’t taste it. 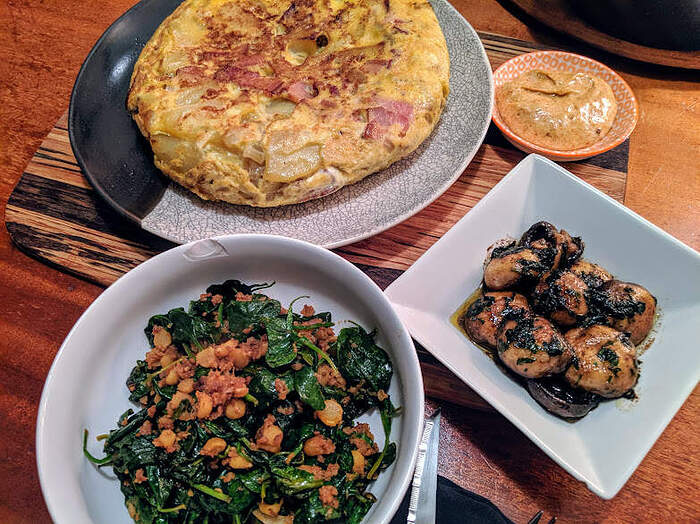 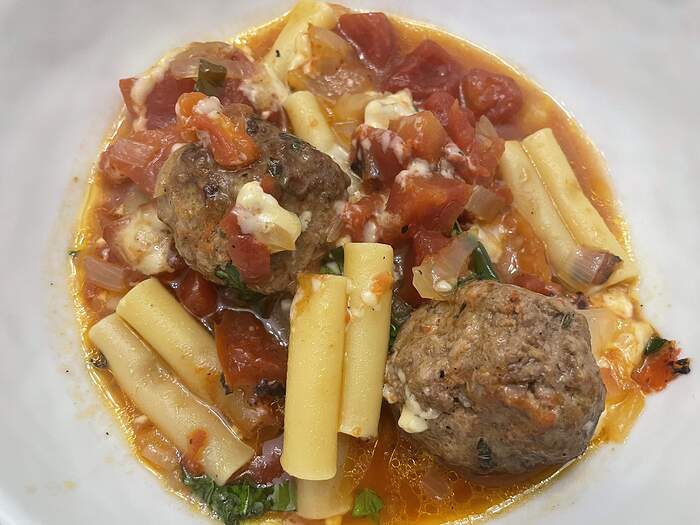 Decided to try making jerk chicken. I was hoping to find a whole cut-up chicken but, while there was lots chicken, there were no cut up ones so I ended up with a whole roaster.

I used a jerk recipe from The Caribbean Pot. The chicken was marinated overnight with a paste of garlic, ginger, onion, lime and orange juice, soy sauce, honey, chiles, ginger, scallion, allspice, nutmeg, cinnamon, and thyme. Served with black eyed peas and sautéed cabbage. It had a nice heat. 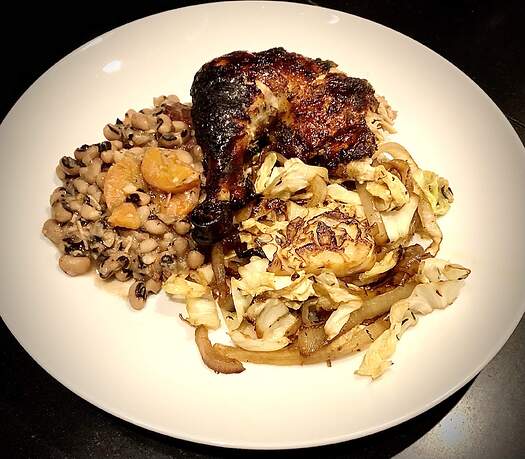 Marie calanders chicken pot pie .With leftover broccoli rabe . Damn it was cold up here today. Had to finish a small outside job . Cold hands even with gloves. Got home . Relaxed . Leveled it all out with pretty much non cooking and wine . Cheers. 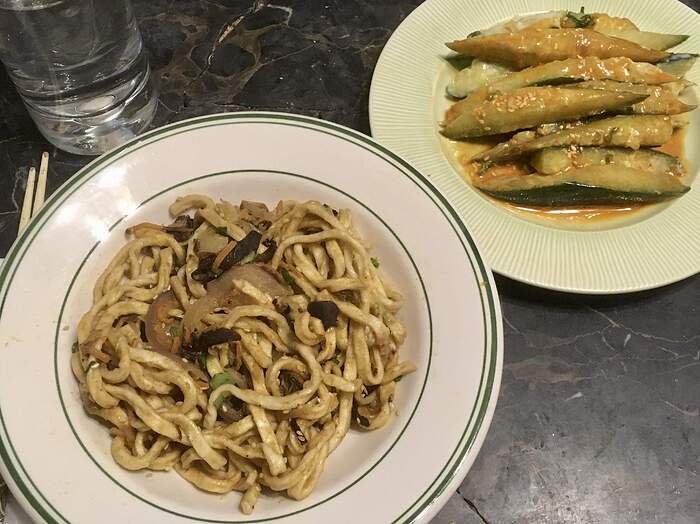 For all the Chinese cooking my BF and I do, it is with irony that tonight’s meal was a BLT. We had been going hard with Chinese/Asian meals in the last couple weeks, and have been on a brief hiatus from such meals.

Well, actually it was a B.L.A.T tonight. Used spinach instead of lettuce and added a garlic-peppercorn aioli. Truffle fries (air fryer) with Pecorino Romano on the side. I’ve long been in the “truffle flavoring is overrated” camp, but it is pretty amazing with bacon. 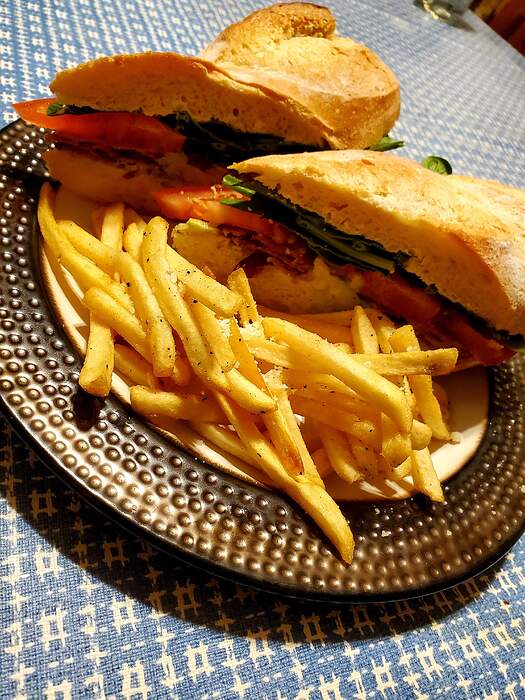 To drink was Benham’s vodka on the rocks. It normally retails for $30 a bottle but my go-to liquor store had a special “red tag clearance” sticker for $12 today, so even with skepticism I felt it was worth a shot. Ended up being comparable to Stoli. I was impressed. 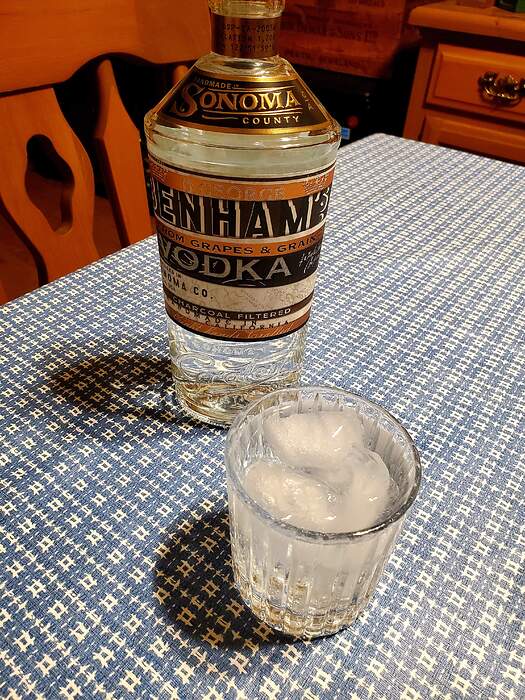 A couple of recent meals:

One of B’s favorite meals as a kid was stuffed bell peppers (not a dish I grew up with…I had it once as a kid at a friend’s house and didn’t care for them). Well, I put my own spin on them and made them with poblanos stuffed with Rotel tomatoes, brown rice, crumbled tofu, and black beans and they were pretty good! B ate 'em up and the leftovers the next day. Spring Onion enjoyed stuffing them (but, of course, did not eat them). I served them up with fluffy baked potatoes with a side of roasted/charred broccoli and topped with leftover haydari from Magic Bites in Arlington.

By the way, I recently received a cooking -related email (can’t remember which), heralding a “new” technique for opening up baked potatoes so that they retain their fluffiness. Out of curiosity, I clicked through and all the guy did was cross-hatch the top with a fork and then squished the potato from both ends to pop it open. I was like “huh? This is ‘new?’ I don’t think so. Isn’t this technique as old as the hills?” 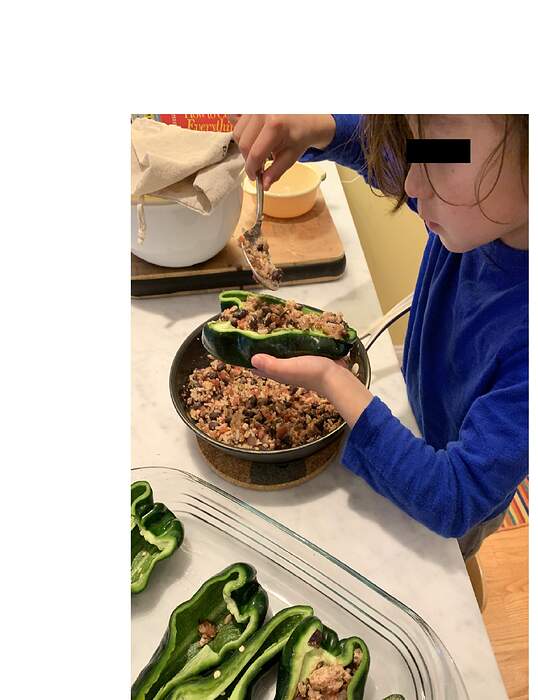 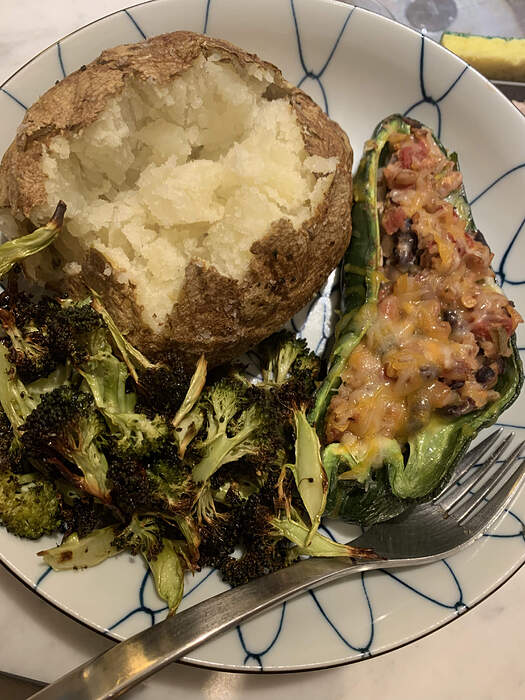 I recently made Smitten Kitchen’s cabbage and farro soup. B was a bit suspicious of it but he loved it. Good thing because I made a huge pot. I also made no-knead bread which turned out to be more like a ciabatta rather than a big puffy country loaf. Too cold in the house (we like keeping the thermostat hovering around 62-64F in the winter). Well, at least it made for decent salmon burger sandwiches.

Lunar New Year meal was nothing special (I didn’t have noodles, dumplings, or Korean rice cakes on hand and no time to run out to the neighborhood Japanese market or to HMart). A mix of real breaded chicken and Quorn “chicken” for B’s katsu (full-on Quorn for me), sides of shredded cabbage and rice. There was Korean miyuk guk (seaweed soup) but no photo. Happy Year of the Tiger, everyone! 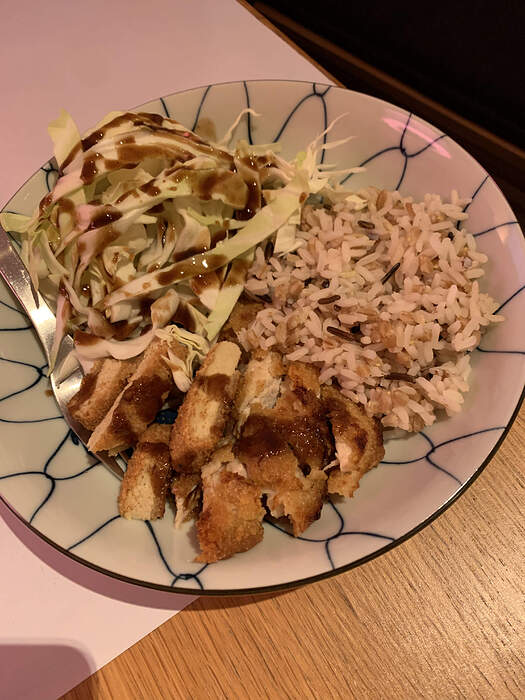 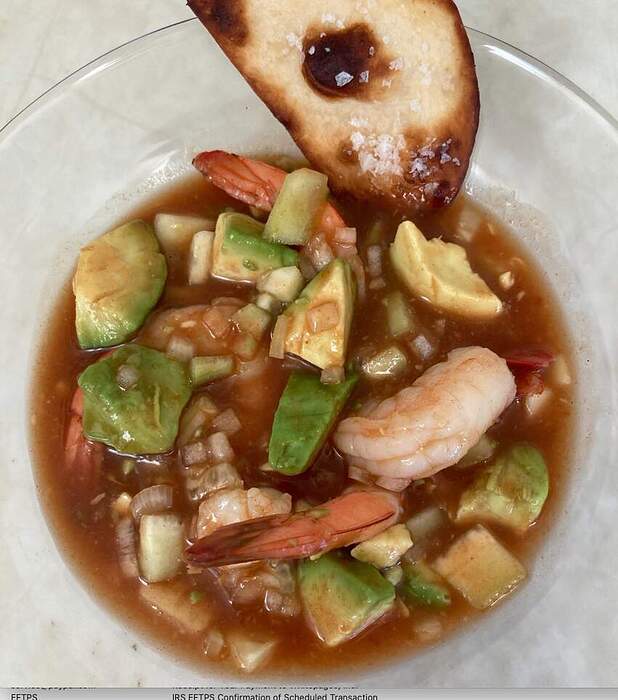