I had a craving for something I’ve never made or had before. Go figure. So I said to myself “Self? Just go with the flow. There’s always scrambled eggs if it doesn’t work out.”

Potatoes were “marinated” for about 1 hour in a combo of bourbon, a bit of soy sauce, Worcestershire sauce, minced garlic, honey, and vegetable oil all shaken together in a jar and poured over the potatoes in a Ziploc bag.

The bean/sausage mix was poured out onto a large sheet pan lined first with foil and then parchment paper, and then the potatoes were added, drizzling a bit of the potato marinade over everything. 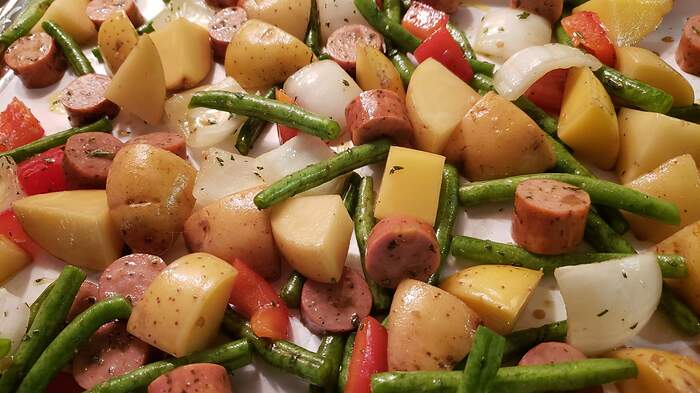 Into a 425° oven for about 40 minutes, turning the whole lot several times with tongs until the potatoes were soft and began to caramelize. 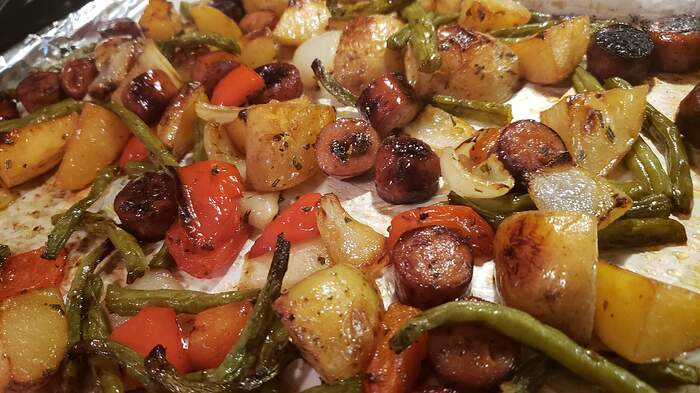 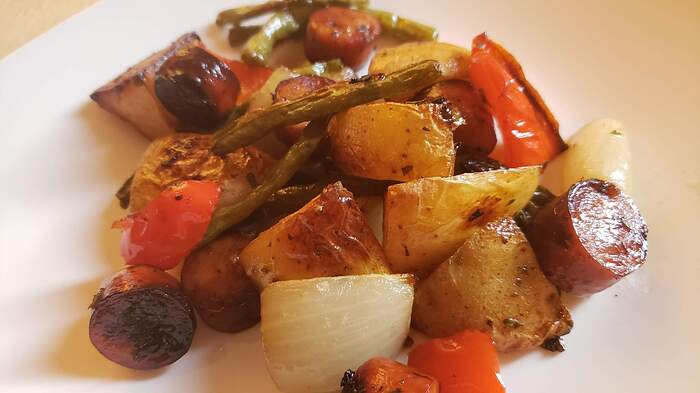 Not too bad. The sausages didn’t have any distinct flavor, so probably won’t buy them again, but not a bad throw-together.

Do you have a chainmail scrubber

We always have a stainless steel scrubber on hand here. Doesn’t shed like steel wool and helps remove crud without too much abrasion.

We are down to random things in the freezer and pantry and veg from the CSA and garden. Sometimes I like to challenge myself to cook with what we have versus go to the store for the usual provisions. A kind of “Chopped” at home, if you will.

So tonight we made quinoa cooked in chicken broth, topped with crispy breaded shrimp, kimchi, stir-fried bok choy, carrot, and broccoli, radish, pickled ginger, and yum yum sauce. It was good although my DH portioned and seems to think I can match him bite for bite. OK, sometimes I can - but not tonight. 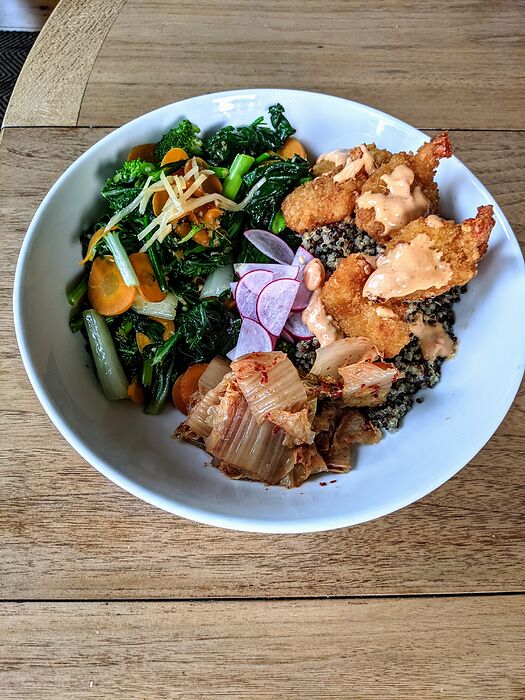 I also made black raspberry jam with fruit we foraged at sundown. 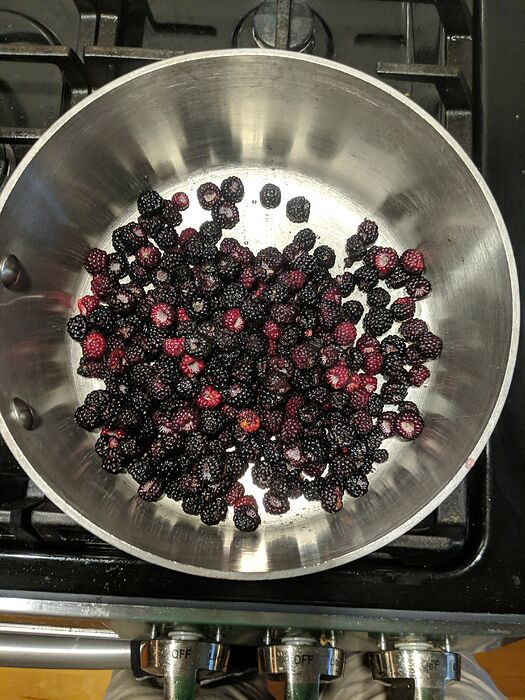 I totally forgot about caraway! We were out of apples so I mixed in applesauce. Last time I discovered, by happy accident, my new favorite kraut method. I had some apple pie filling to use up and mixed it with jarred kraut, moistened with chicken broth, added garlic, juniper berries, and bay leaves, topped with sliced onions, and dotted with butter and baked. I did the same this time except used applesauce + a little brown sugar and warm spices and thickened the mixture with cornstarch. It sounds weird but was really good. Sticking with this approach - adding caraway going forward.

We had another nice dinner at Cafe Panache in Ramsey, NJ. We enjoyed black bass in lobster sauce; pork chops with an apple shallot reduction; garlic shrimp with avocado, and filet mignon ravioli. For dessert we had butterscotch caramel budino. It all went great with an excellent Chateauneuf du Pape. 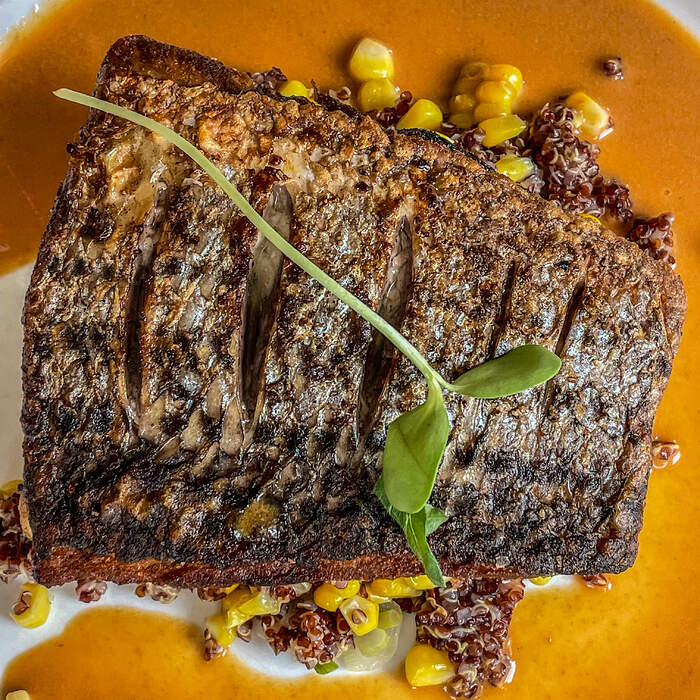 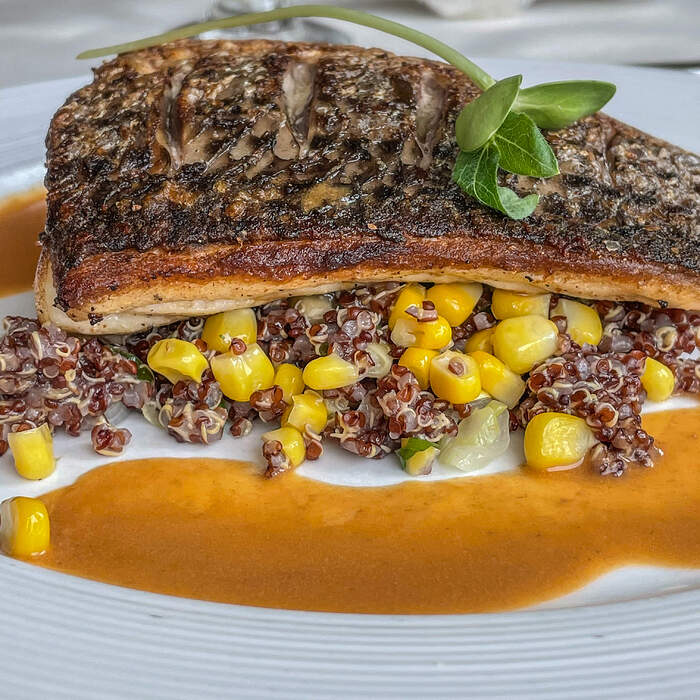 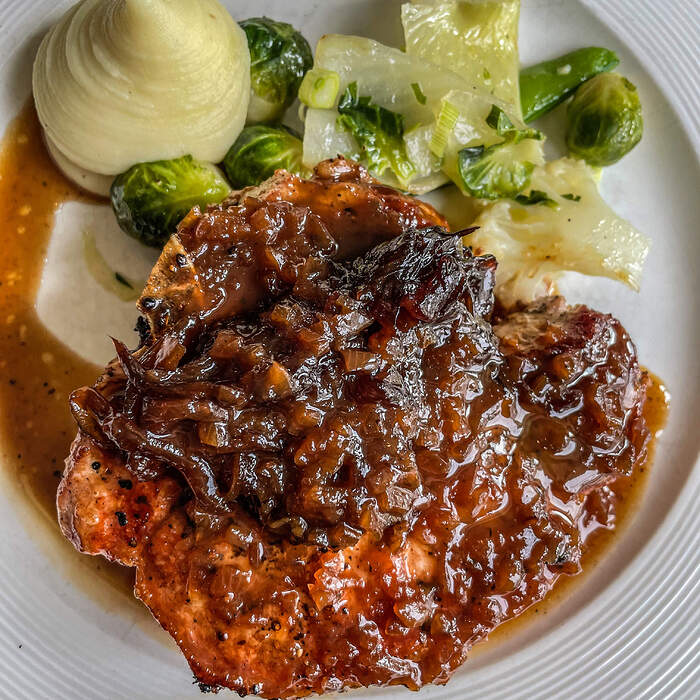 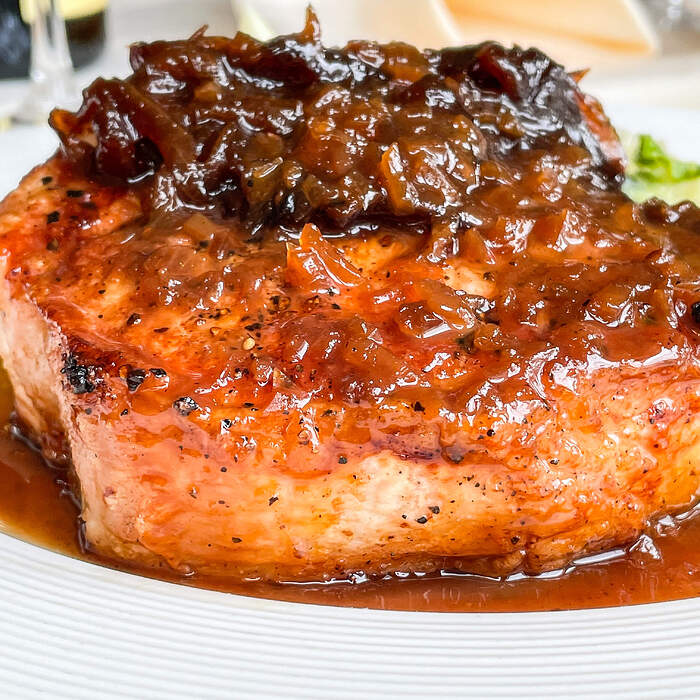 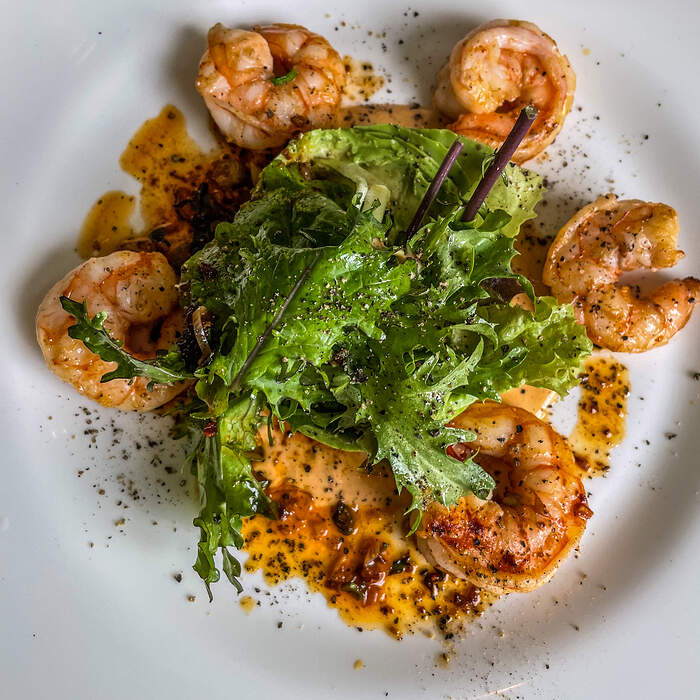 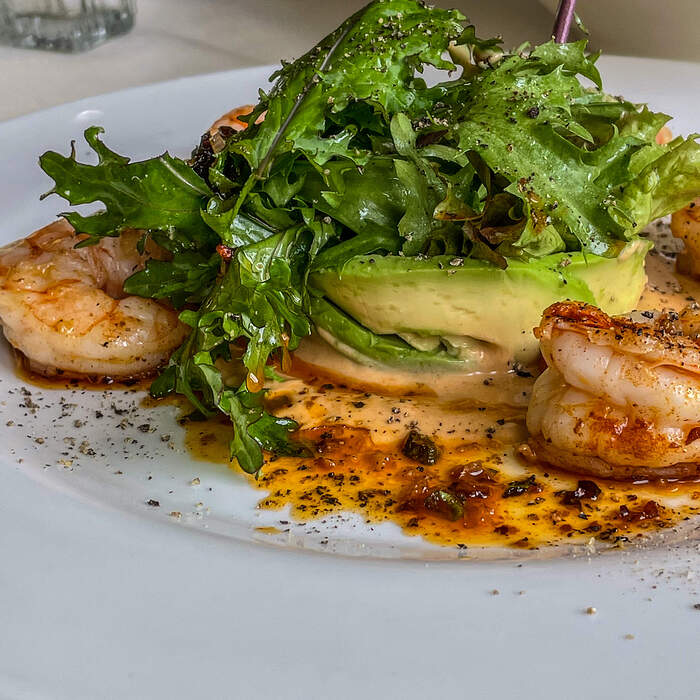 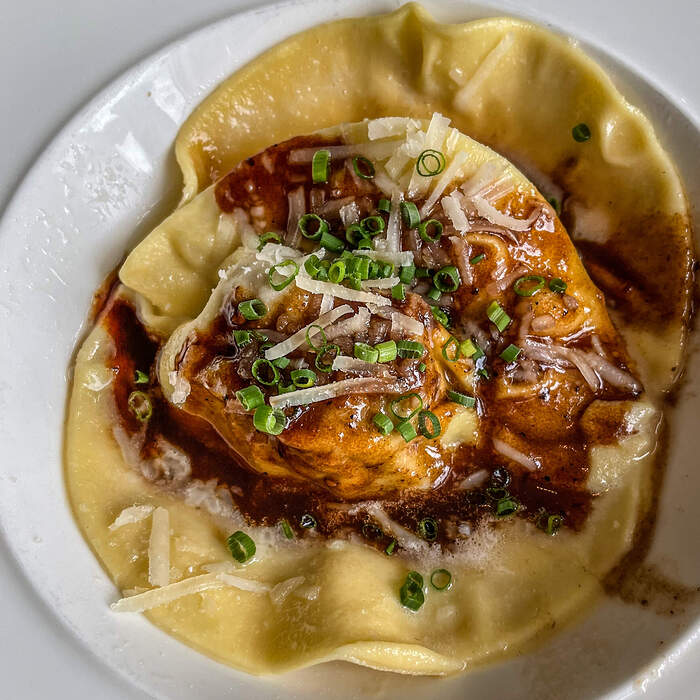 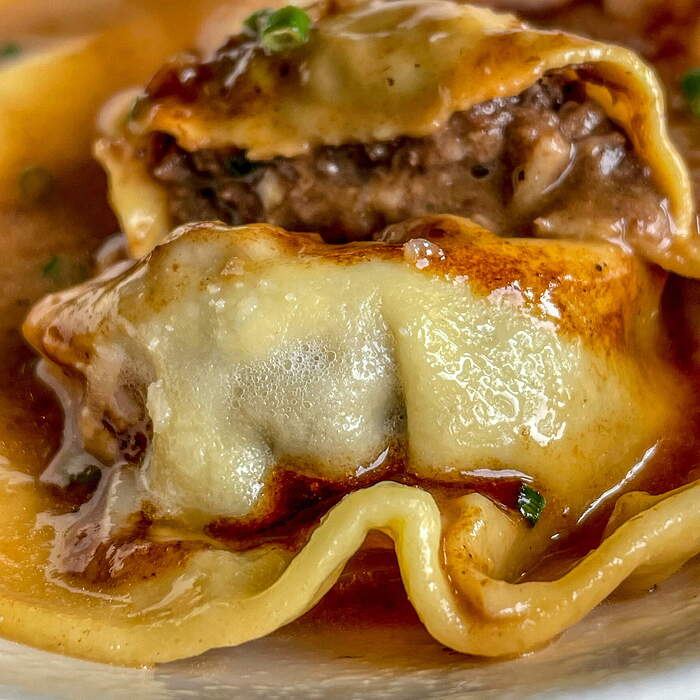 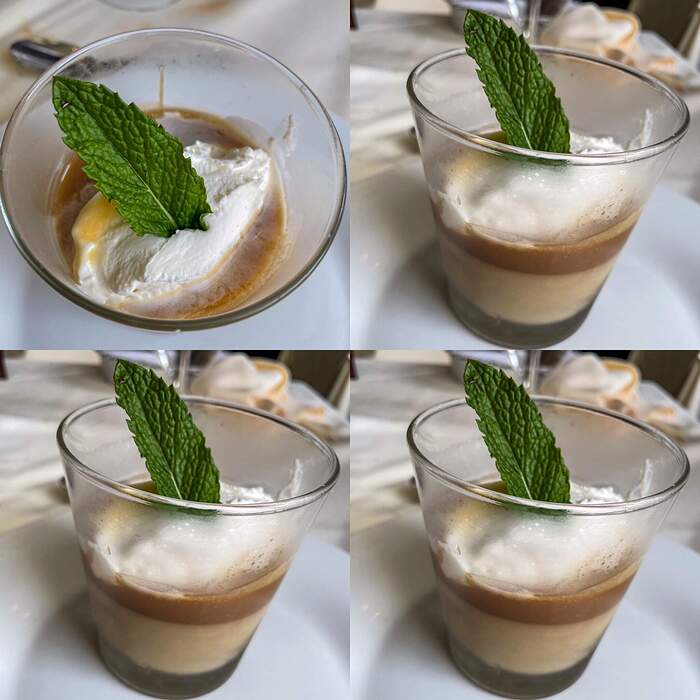 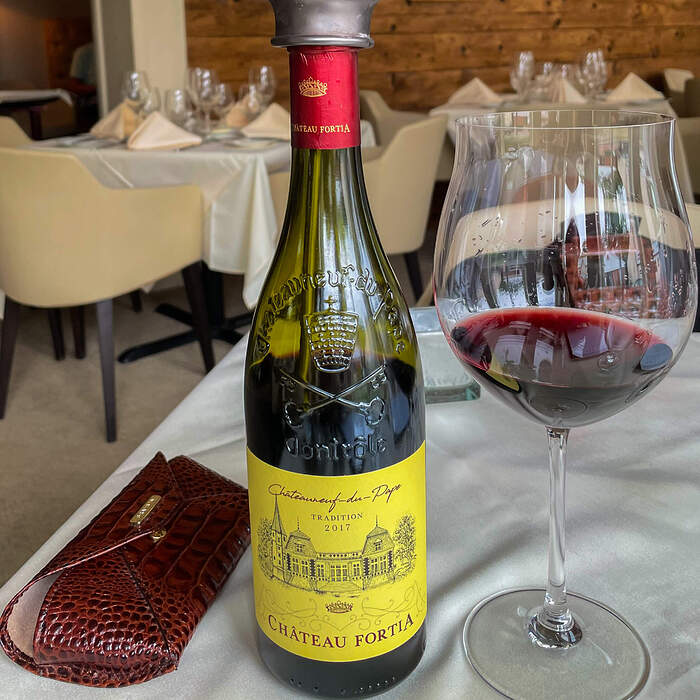 cast iron grill pan (which btw has been quite difficult to clean!)

Yeah mine too. I can’t decide if the visual appeal of grill marks is worth the work of getting stuff out of the gaps… I’m leaning towards NO.

Here in Zurich they’re only available in a couple of places. They’re super expensive. And worth it.

I have to be honest since waking up this morning and writing my steak recommendation I’ve been dying for a tomahawk rib eye Unfortunately my day brought me to Ocean Twp instead of Red Bank, so Wegmans it was. (Mea-culpa to Stew at Monmouth Meats) Prime aged tomahawk rib eye, (Wegmans made) crab cakes, sautéed broccoli ( shout out to Goya on having an absolutely decent white cooking wine) and some corn on the cob. Absolutely delicious! Wow great meal thank you for the inspiration!! Everything …

Looks delicious! What a steak!

It Was A Do Nothing Day.

Like literally. I did nothing. Except a load of laundry and some reading. Finally had to text my sister to STOP CALLING ME as I was taking a break from the world.

The most I did was make dinner: pan-seared duck breast with an orange-ginger sauce, shallot-parsley Israeli couscous and steamed asparagus.

And wine. Back to the real world tomorrow. 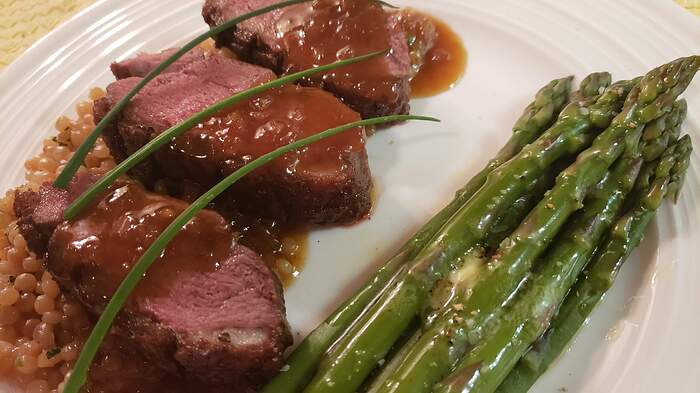 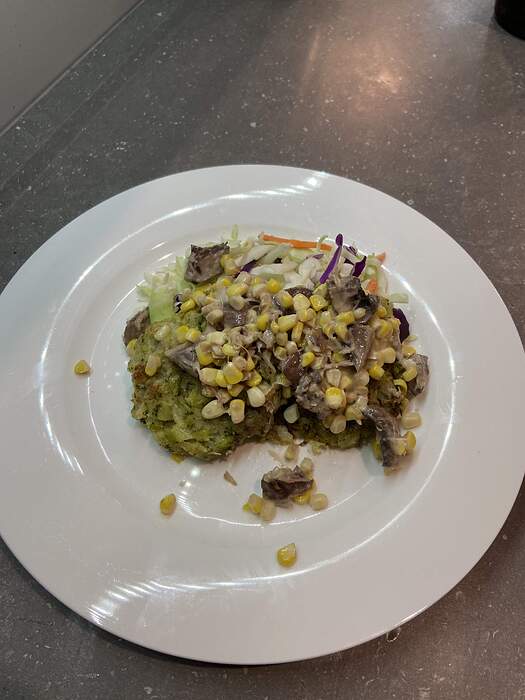 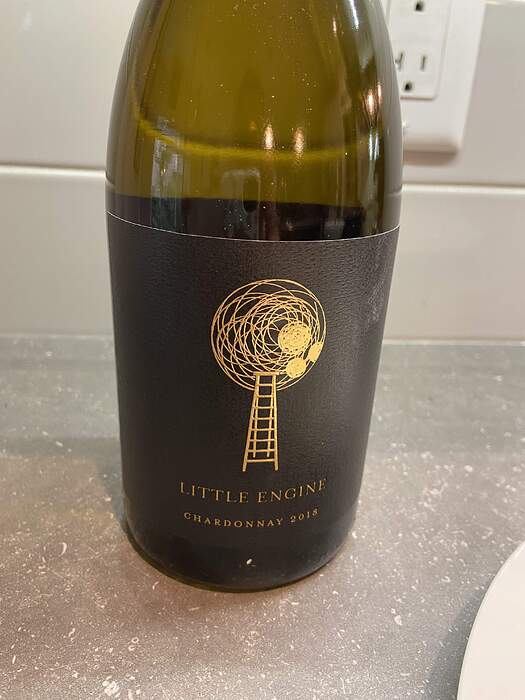 Well after all my vegetarian food talk, I cracked.

I needed to clean the veggie drawer out, so I made some broccoli and potato cakes. I couldn’t decide on a topping, so roasted some COTC. I was stuck after that, and went through the freezer. Found some homemade stuffed mushrooms with Dungeness crab. I baked a couple for an appy, then chopped up the rest to mix with the corn as a topping. There was also a sad looking bag of coleslaw on its last legs in the fridge to add, too. Not the prettiest plate, but super tasty and filling.

Wasn’t going to have a drink tonight, but we finally had some rain after our driest spring on record. I thought it was appropriate to open a bottle from my favourite winery in the valley where I live. Cheers to more rain in the forecast the next two days so those grapes can grow for harvest this year

Good for you. A break is needed sometimes.

Mr. Happy, re your new cast iron grill pan, yes, it will probably be a xxxxx to clean. But I hasten the process by mooshing to-be-grilled meats in OO, salt and pepper before grilling. Then heating the grill pan to smoking, spraying with Pam or ilk before plunking protein onto the grids. You should get a good degree of release when you turn your meats. If meats seem to be sticking at turning point, give another shot of spray before second side.

When it;s time to wash up, my new go-to is to add a shot of dish detergent to the cooled pan and fill with hot water…and let it soak til morning. Sounds slovenly, but trust me that yucko pan will wash much easier in 12 hours. I use a stainless pot scourer, 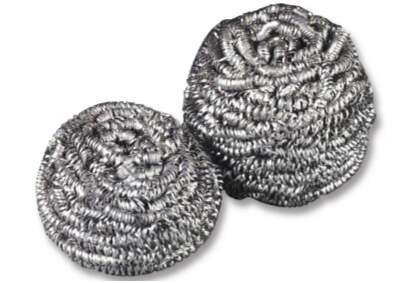 and/or one of those nylon/plastic thingies.

Enjoy your new grill pan. I love mine…several of several sizes, for meats and veg.

Back to cooking for one or two!

Medium well steak for the hubs. . 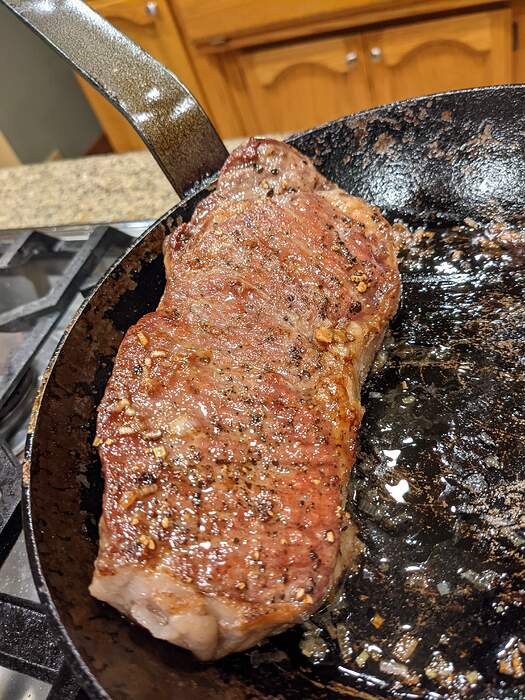 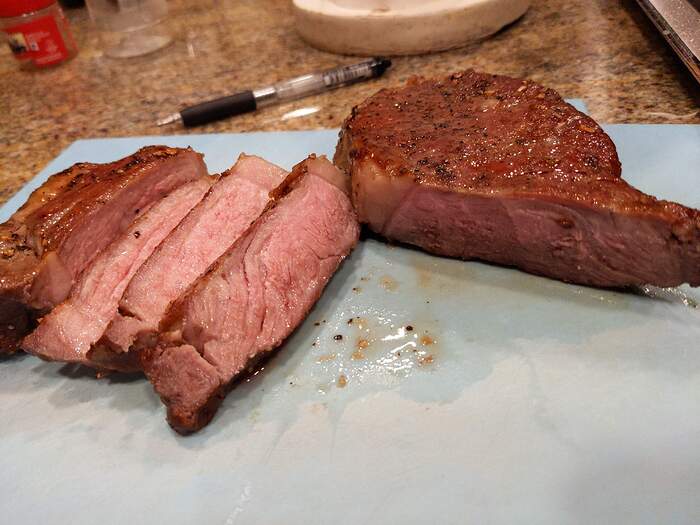 Salmon rillettes for me. 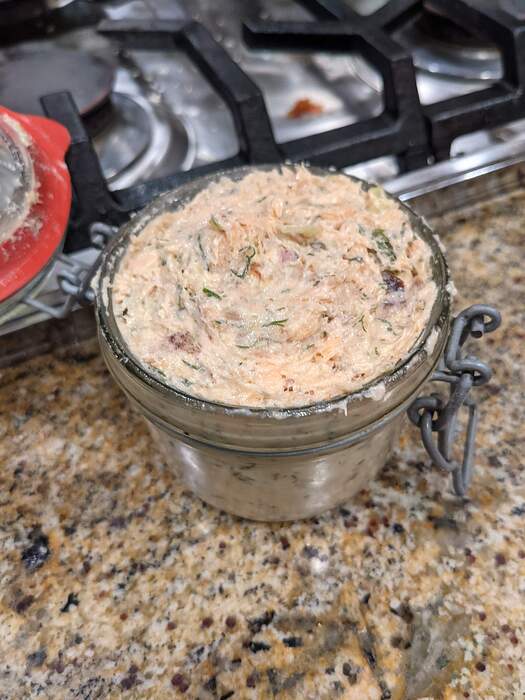 29 years on this earth and I’ve still never made spaghetti and meatballs. But here’s a meatball parm instead. 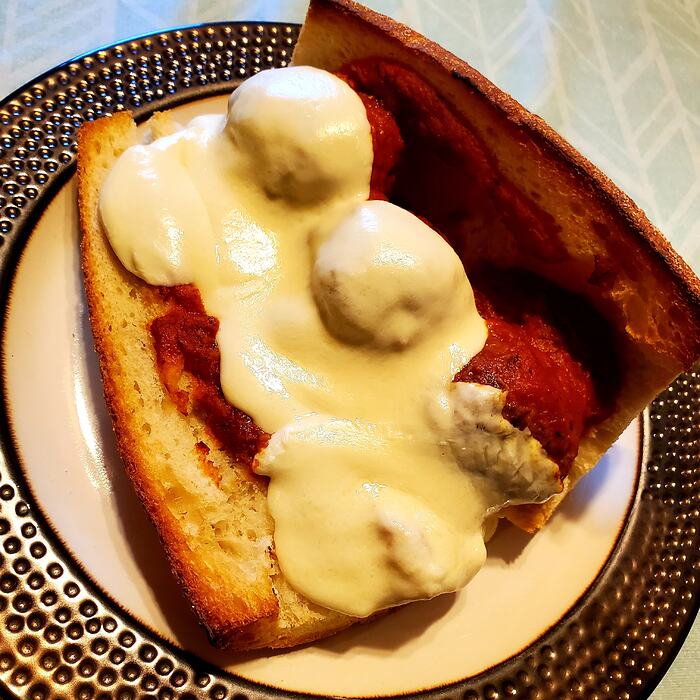 WFD was determined by the potent atmospheric river parked over me. So is it raining? You betcha by golly wow! Albondigas soup and sides. A little tequila. 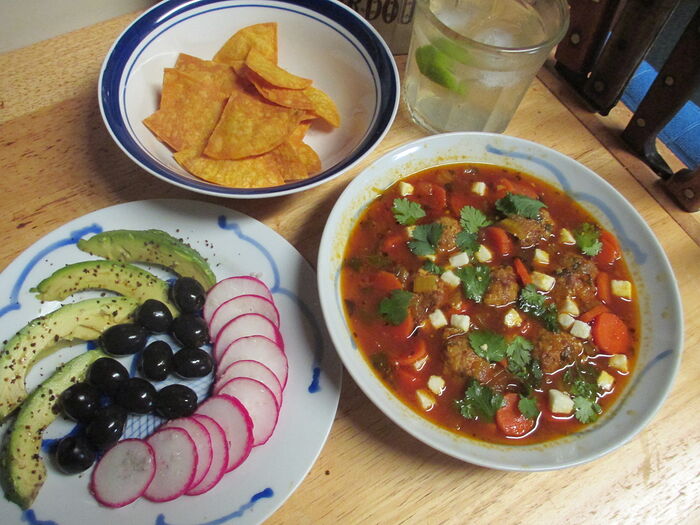 Hah- too funny. I remember like 25 years ago, we sent my dad on a European journey, a tour, and when he came back he said he was disappointed that in Italy he couldn’t find that dish. He thought he was going to have the best spaghetti and meatballs of his life there!

Last night at my sister’s, I made NYT’s lemony shrimp and beans dish, which we loved.

Tonight I used the leftover Rancho Gordo beans and some chopped up, leftover roast pork from my first ever H Mart shopping spree (OMG what a haul!), with olive oil, scallions, minced leek, garlic, thyme, parsley, some kind of green leafy thing from my sister’s fridge, a little water, simmered together for a while. Splash of sherry vinegar and served on garlic-rubbed toasted bread, drizzled with olive oil. Two similar dishes with very different flavors… both really tasty! 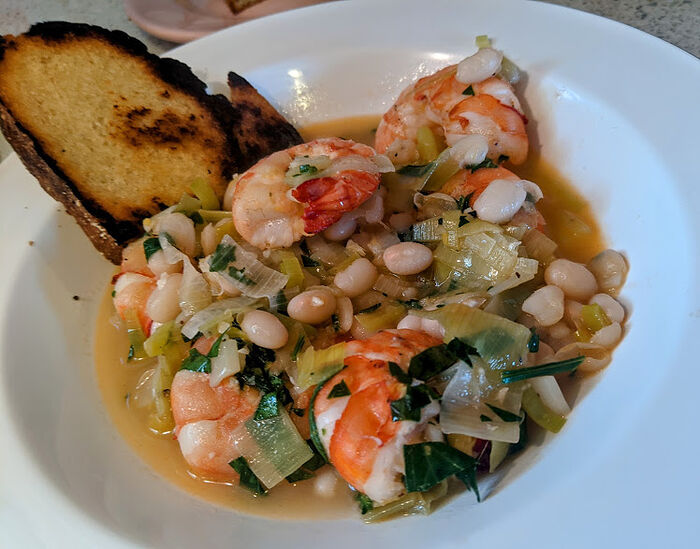 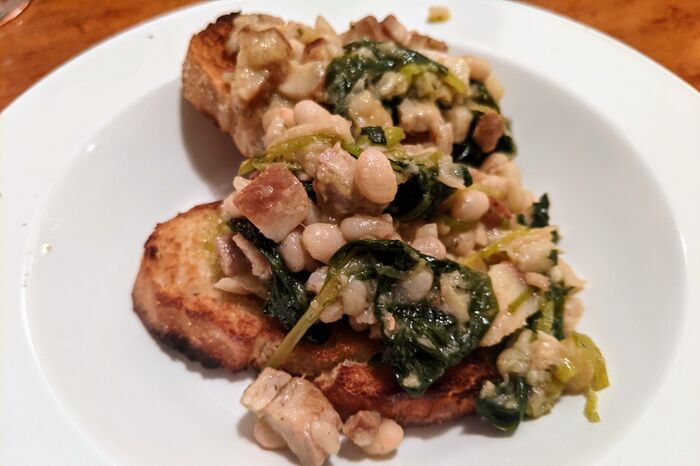