I gotta be honest, since writing that this morning now all day I’m jonesing for a ribe-eye. Dam you Ho’s!!! Lol

Ok I picked one up while at Wegmans details to follow soon! Lol

Thank you all for the great steak tips, especially the step by step instructions. I think I’ll hit up Monmouth Meats on Friday afternoon as I will be heading south on the parkway from NNJ. Is this something I should order ahead of time?

You certainly can it can’t hurt, but I’ve never called in and he’s never been without what I wanted. I was just down in Ocean Twp so I hit up Wegmans. Enjoy and I want pics!!

I have never had to order in the past as he always seems to have what I want, but it couldn’t hurt to call especially since it will be on a Friday

I have to be honest since waking up this morning and writing my steak recommendation I’ve been dying for a tomahawk rib eye Unfortunately my day brought me to Ocean Twp instead of Red Bank, so Wegmans it was. (Mea-culpa to Stew at Monmouth Meats)

Prime aged tomahawk rib eye, (Wegmans made) crab cakes, sautéed broccoli ( shout out to Goya on having an absolutely decent white cooking wine) and some corn on the cob.

Absolutely delicious! Wow great meal thank you for the inspiration!!

Everything good starts with garlic and shallots 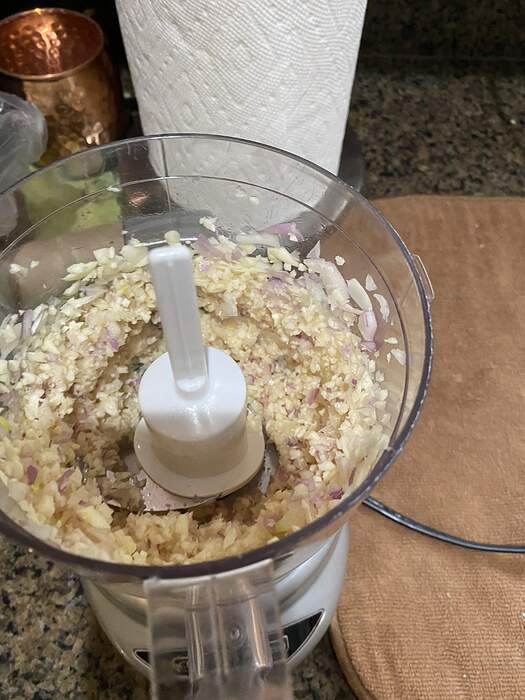 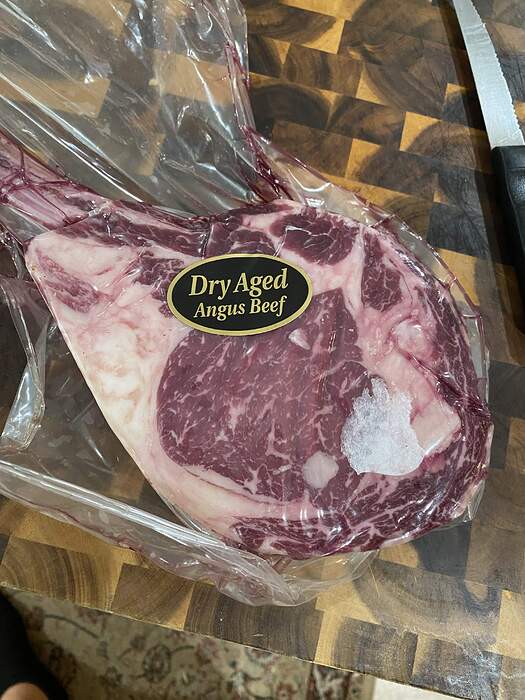 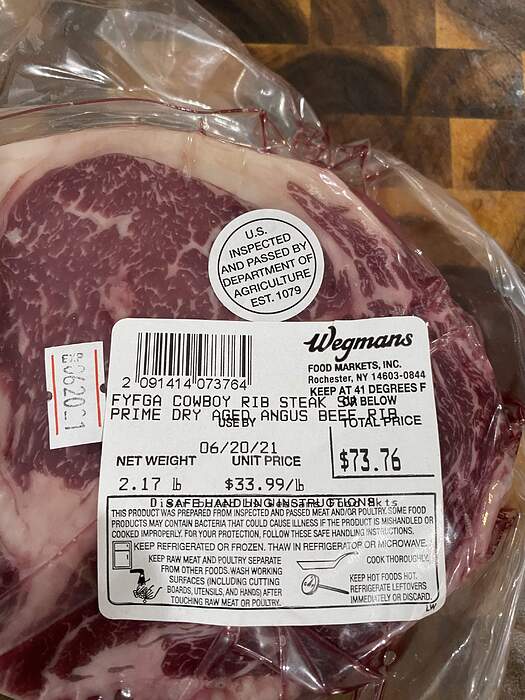 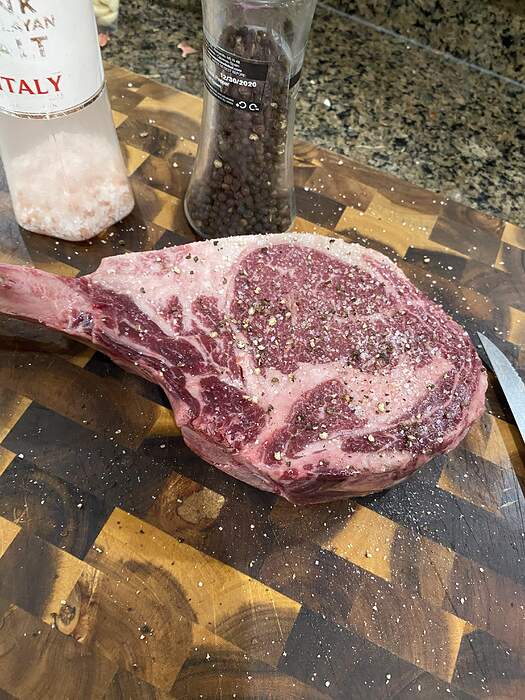 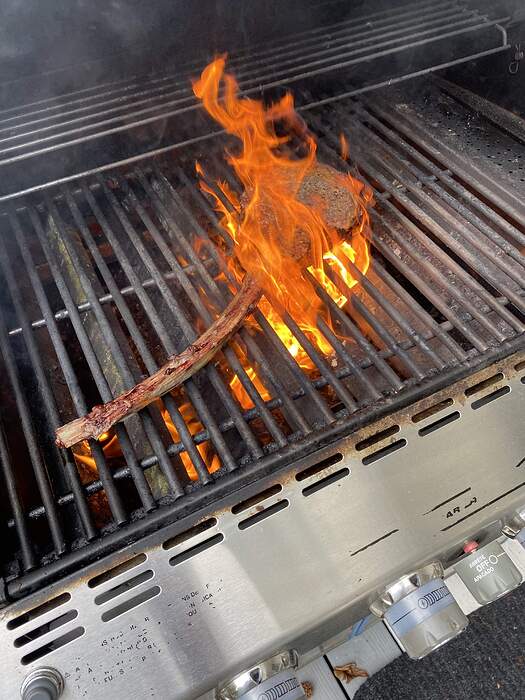 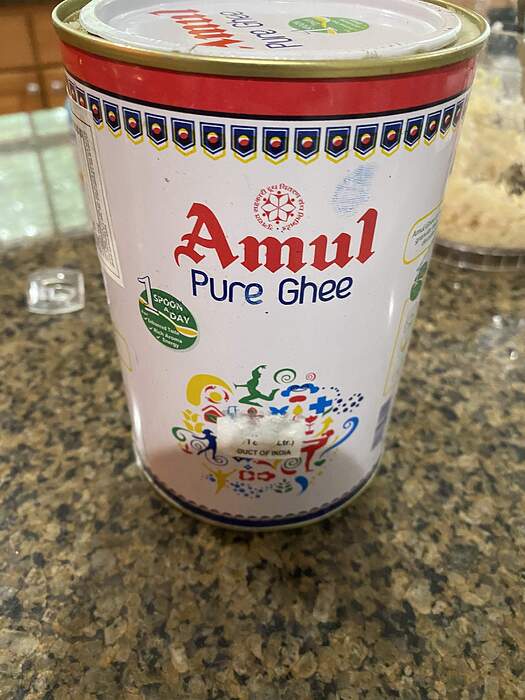 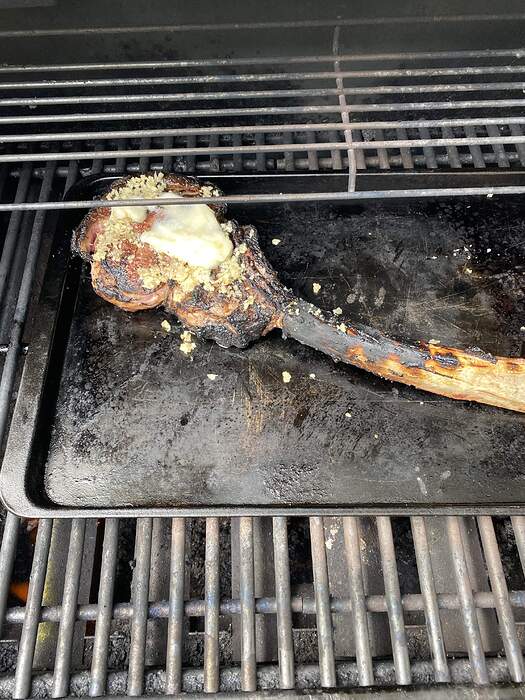 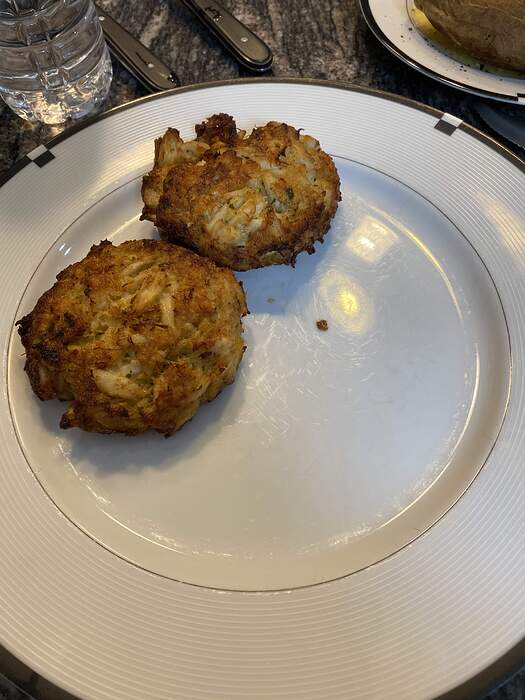 Shout out to Goya! 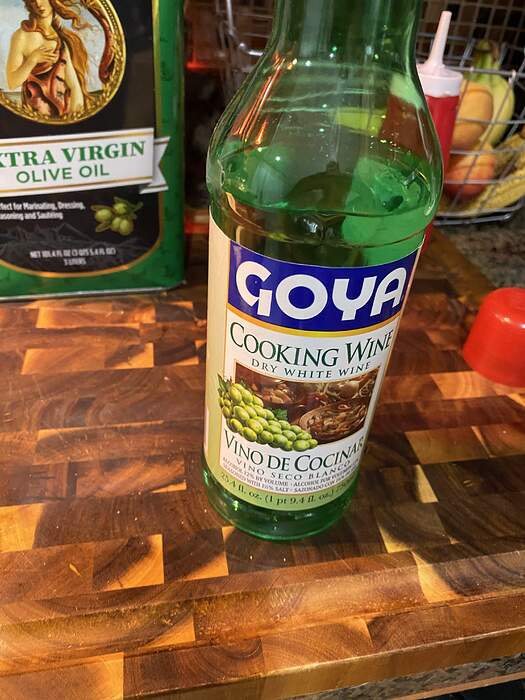 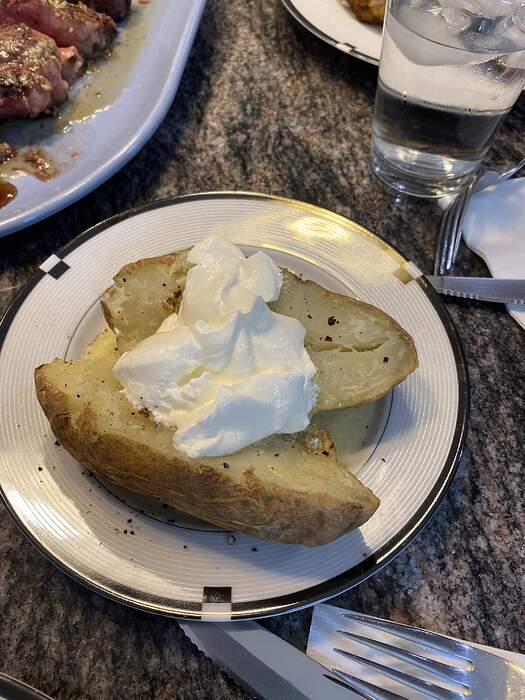 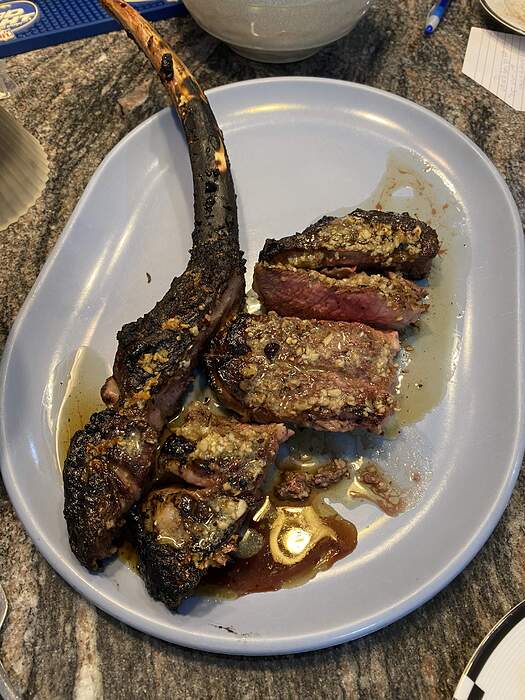 OMG THANK YOU ALL a for the inspiration!! Dam great meal!!

How was your steak MsBean? I got some of that grass fed tenderloin from Shoprite that was on sale father’s day weekend. Has tons of raw beef which is always a treat and made myself a giant chateaubriand, cool in the middle with a butter shallot wine sauce. Good times!!

It came out really good, thanks for asking. It was little bit overdone for me but perfect for Mr Bean as he likes his meat rare/medium rare while I like it very rare. I posted pix in the June What’s for Dinner thread.

I’ve never had chateaubriand but it sounds good. I may have to try it someday.

The redder the better.

It’s just a fancy name for a giant tenderloin steak!

Glad you enjoyed your steak! I’m a fan of rare steak but when it is super well marbled I think more done is actually better because it gives the fat a chance to lube up. Steak looks amazing!!

When I first moved to the area (1993) The Shadowbrook was still serving dinner. They were also part of the Entertainment Club, they had a coupon (reusable) for 50% off!! They were admittedly long past their prime by this point, but the property was still beautiful, though dated, the service was still tuxedoed white glove. They had chateaubriand for 2 for $ 50. (back then), served table side. They would bring the cutting board with the tenderloin, grilled vegetables and delicious mashed potatoes. I would get a cesare salad (tableside as well) and a couple of drinks the entire tab would be $ 50. after the meal was discounted from $ 50 - $ 25.

You would eat and be served like a king and escape for $ 50. for two people, it was the best deal back then.

I also have fond memories of The Shadowbrook. While there is plenty of good food around, that type of experience is hard to find today at any price.

I haven’t entertainment booked for a while not but I remember Shadowbrook was still on it! I can’t remember if I’ve ever gone. But man that sounds like an amazing deal!! I wonder how they’re doing these days.

Come on by and I’ll serve up some grass fed chateaubriand for you in white gloves. But probably boxers and t shirt not a tuxedo, can’t fit into mine right now.

Come on by and I’ll serve up some grass fed chateaubriand for you in white gloves. But probably boxers and t shirt not a tuxedo, can’t fit into mine right now.

Don’t threaten me with a good time!!!

Ah. It sounds so much more special as Chateaubriand! I’ve never been a big steak eater, actually didn’t eat meat for 25+ years so It’s not something I go to naturally.

I think my problem was my grill is a piece of shit and doesn’t get hot enough to get a good sear. I either need a set up a la @NotJrvedivici or a blow torch.

A5 wagyu ribeye at Monmouth Meats. Sorry Stew just wrote a check for my daughters first college semester. Won’t be eating wagyu for a little while 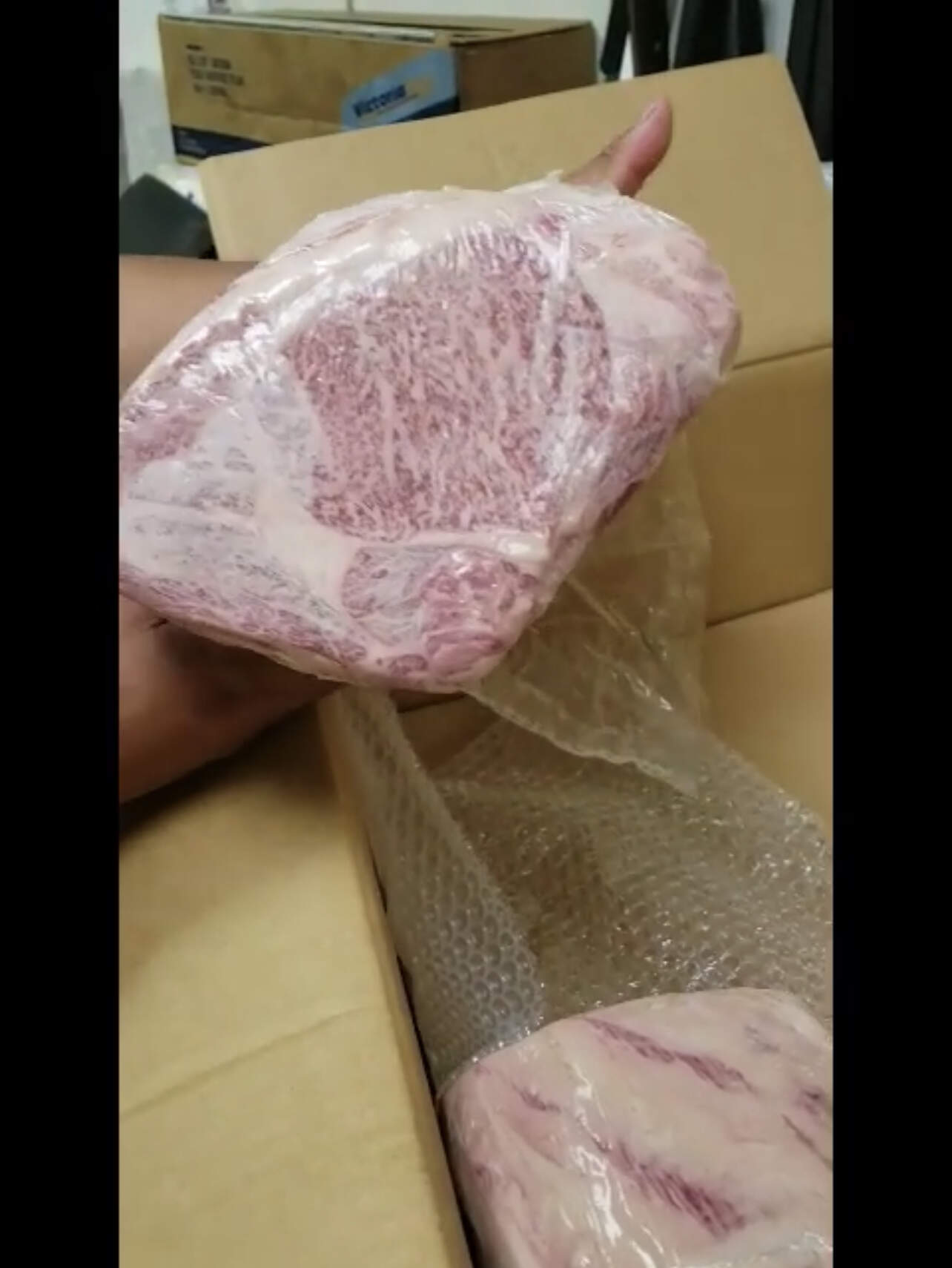 One word folks… Toscano. The BEST steak in NJ. We stopped in for an early dinner on Saturday. I don’t know how but each visit it only gets better. Hubs had the bone-in NY strip steak and I had the bone-in filet. Mine had a pastrami rub with root beer butter compote

. Both came with whipped mashed potatoes with pieces of chunky pancetta and cheese. Needed a “veggie” so we chose a baked creamed spinach. WOW! Always a beautiful dining experience 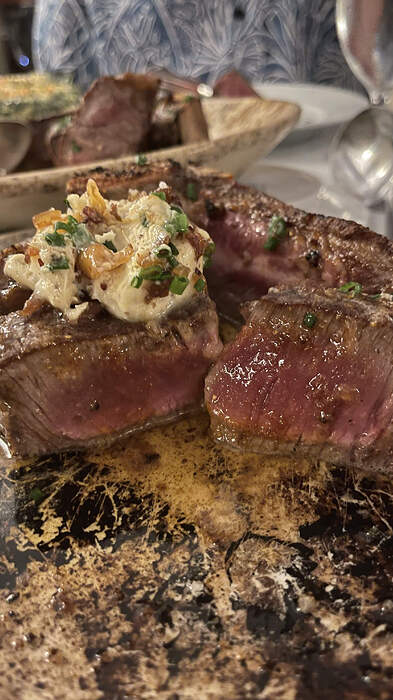 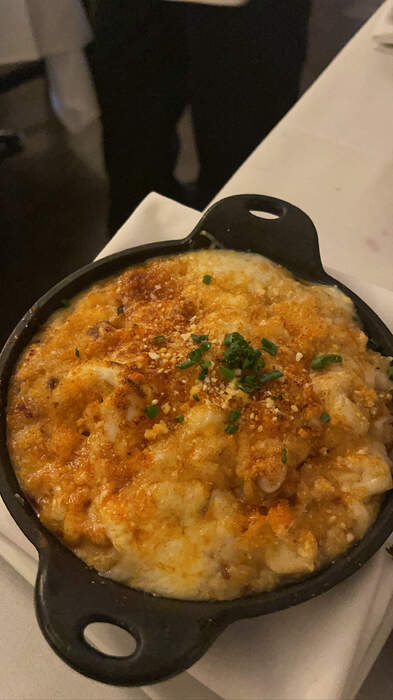 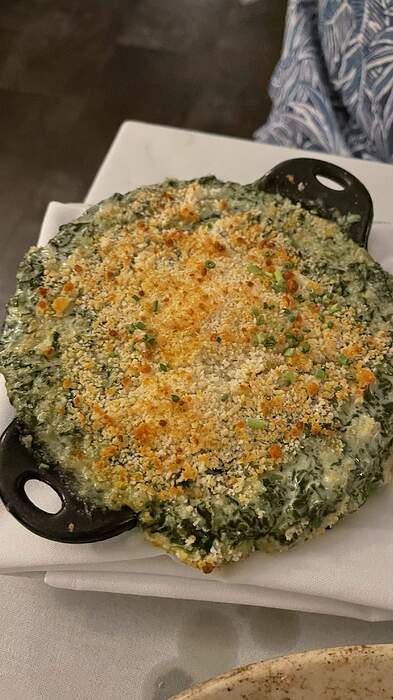 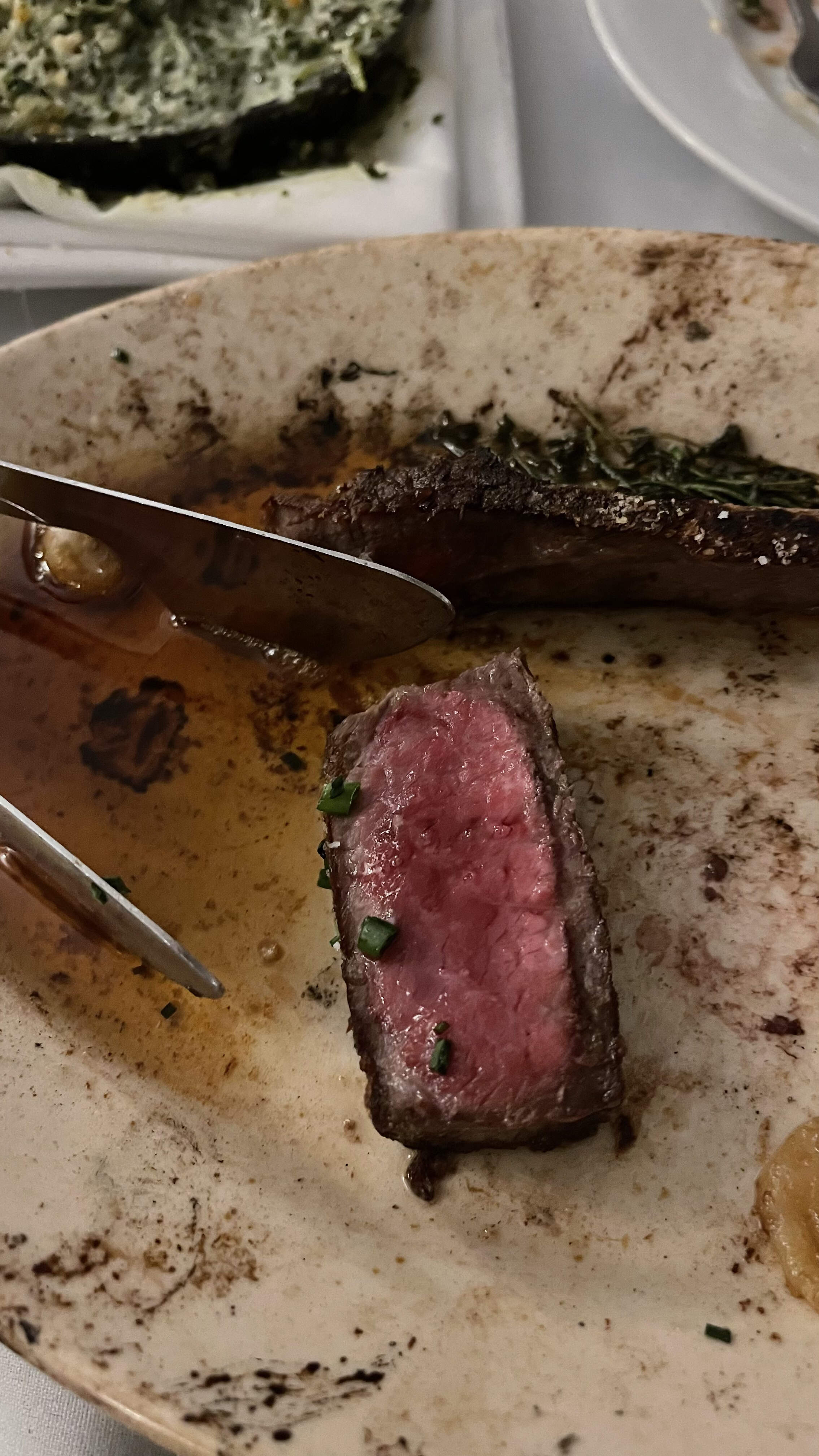 Love it! Dam I miss that place!