Actually, I just liberated my grill, Mo Weber from imprisonment in our garage since February or March. T-Latch broke then, and I finally called in a repair crew to fix the damn door. I’ve been buying Lump Charcoal since last October, so I have almost 100 pounds of that. And, dried hickory chunks too. I’m planning to bring Mo Weber center stage on July 4th for his Summer debut.

Tonight, we’ll have Dagwood sandwiches on a terrific Potato Bread; with Second Day Potato Salad. No pics will be taken.

Love the chicken and dumplings - once in a while when I need comfort food (last three months?) I’ll do a similar-ish chicken pot pie without a crust, but covered with biscuits. 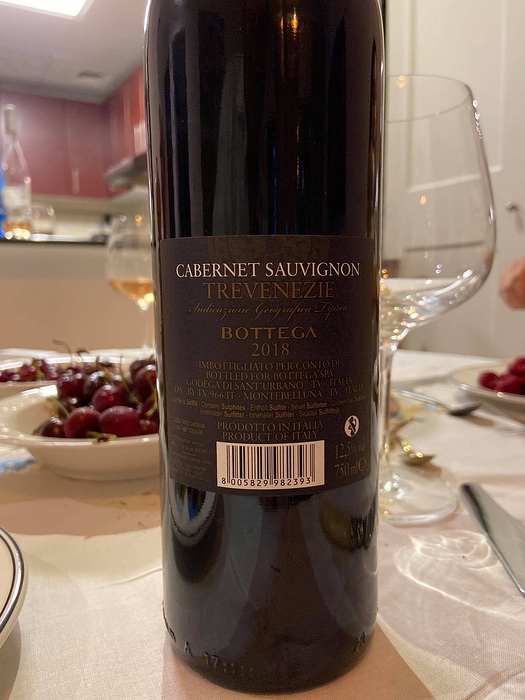 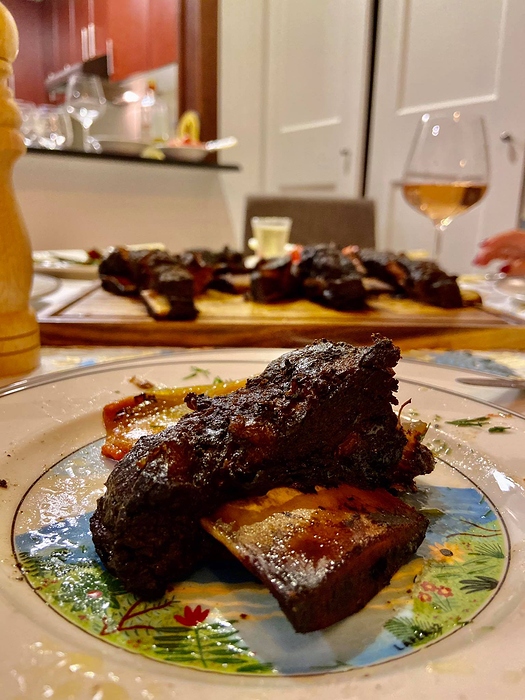 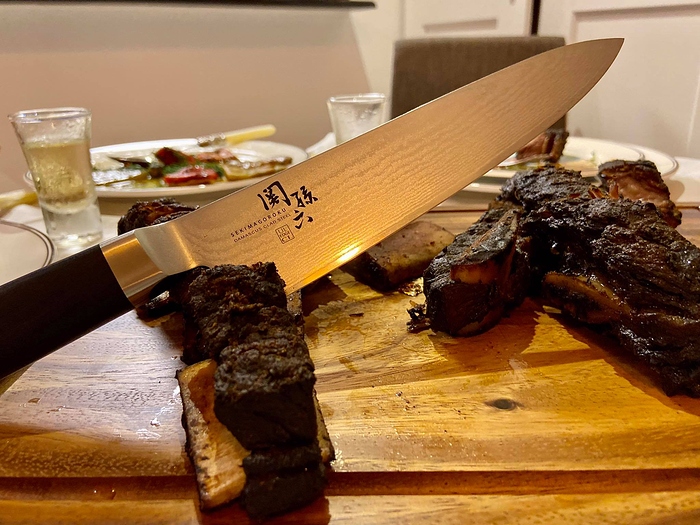 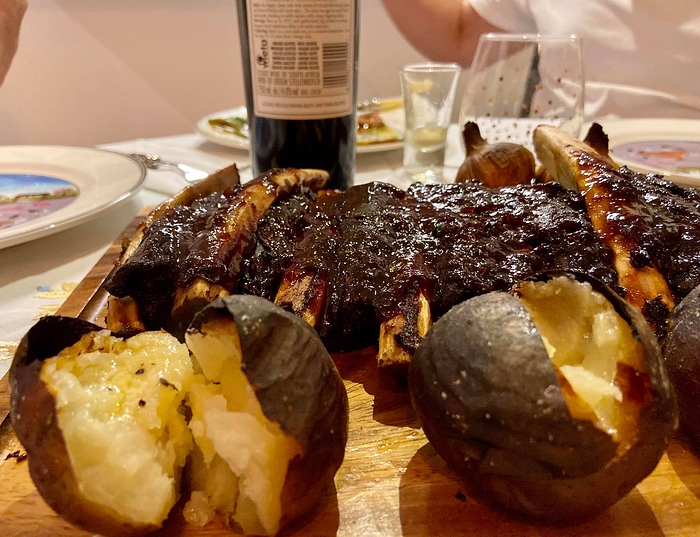 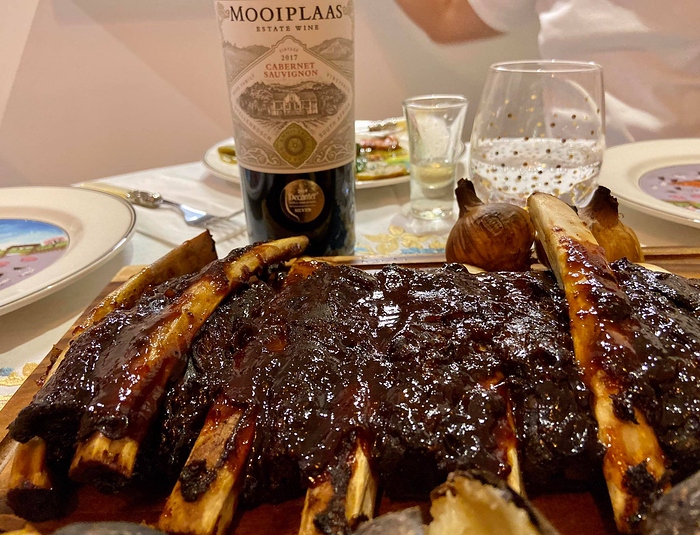 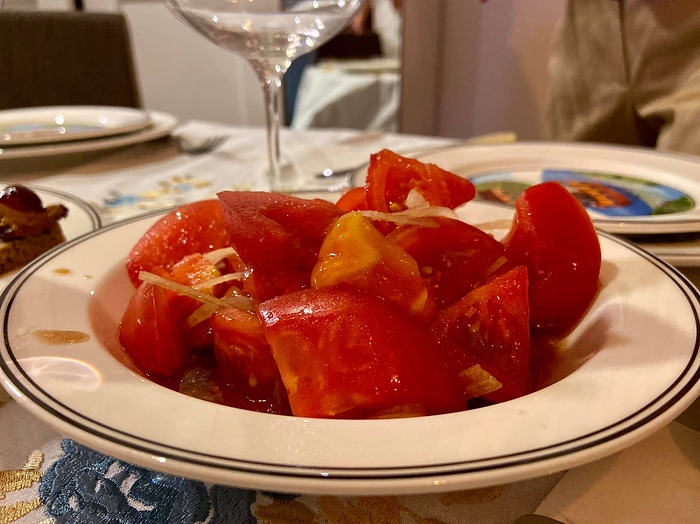 Wednesday Lunch July 1st … For a change of pace … Fresh tomatoes, baked potatoes and ecological ribs prepared in oven for guests and us. My sons and daughter in laws came to say hello … Served with a 100% Italian Cabernet and also a Stellenbosch Cabernet Sauvignon mono varietal too …

I’ve done my share of van ('70 VW) camping, and my share of camp cooking, but, girl, I wanna camp with YOU! Of course, in '70, I’m not really sure we knew what fennel was other than sausage seasoning.

Tsardusted pork chop with a cider reduction sauce spiced up with a bit of cayenne. Grilled zucchini and yellow squash planks seasoned with Penzeys Mural of Flavor seasoning blend.

Wine alongside.
Because Wednesday.
And just because. 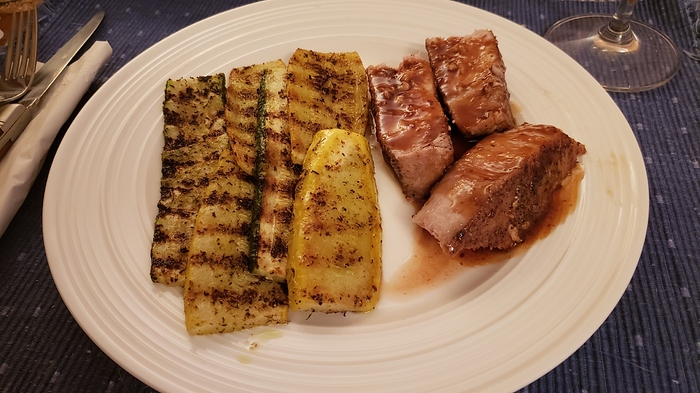 Had a pretty crappy few days - now a week - in the back of a minor interaction, with some fuel thrown on the embers by helpful parties. So, time to go home. Enough already.

Booked a ticket home for two weeks from now (so I’m not getting on a crammed flight at 4x price out of anger).

Informed the adults, who are a bit shocked (even though that was part of the awful after-talk of the nothing situation) and attempting to convince me cancel, given rising cases everywhere and probably increased travel risk.

Will break it to the kids shortly, but they will have 2 weeks to adjust to the idea.

Meanwhile, baked a cake for a wedding anniversary today - kids helped decorate (and write on top after this). 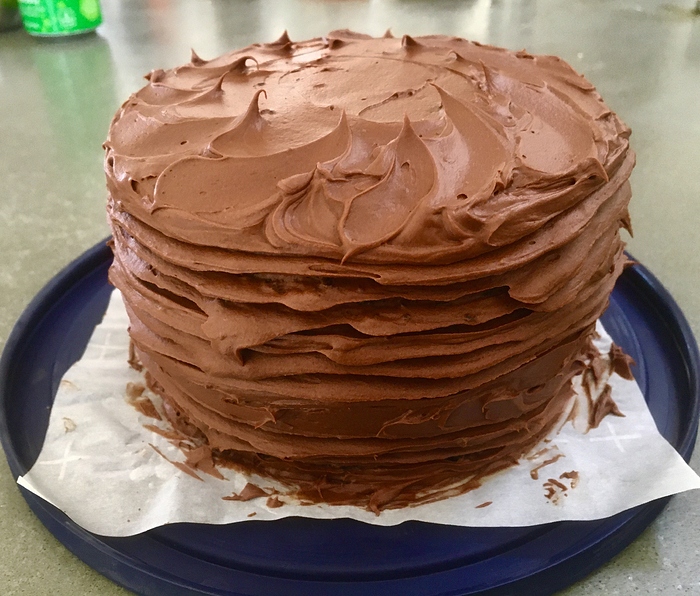 And a delicious late lunch / early dinner for me - scrambled eggs and toast - scrambled eggs a la my vegetarian grandmother who didn’t eat eggs but was the best maker of these ever (grandfather’s favorite), and bread courtesy me and Serious eats’ version of Lahey’s recipe which is really just a few extra days in the fridge. 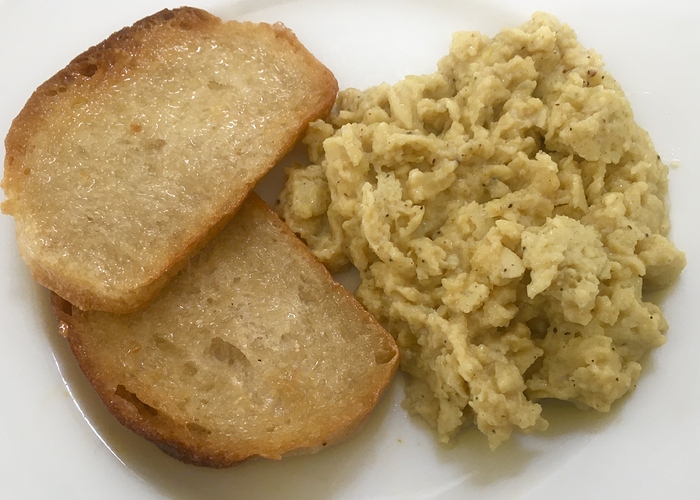 Booked a ticket home for two weeks from now

Just so you know, my D’s original itinerary got changed a few times. Ended up on a flight with mostly pilots and flight attendants, all talking about all the itinerary changes.

If I’m reading things right, NYC is one of the places where cases aren’t increasing, at least relative to population. My D called my father in law, her grandfather, on Father’s Day, and he said “what are you doing THERE?” and she was having second thoughts. She seems okay with it this week. She can now protest without a car. Hope that’s at least a little funny.

that fennel looks excellent! i love cooking up nicer meals when camping.

Fireworks are out nationwide due to cancellations of large gatherings

And also wildfires, at least here.

I’ve learned there’s a lot to be said for virtual gatherings, even with friends and family spread out over time zones and now continents, that would not have seemed likely even a year ago.

Illegal fireworks are rampant in the Bay Area. I heard several dozen outbursts last night from, say, 8pm thru 3am. 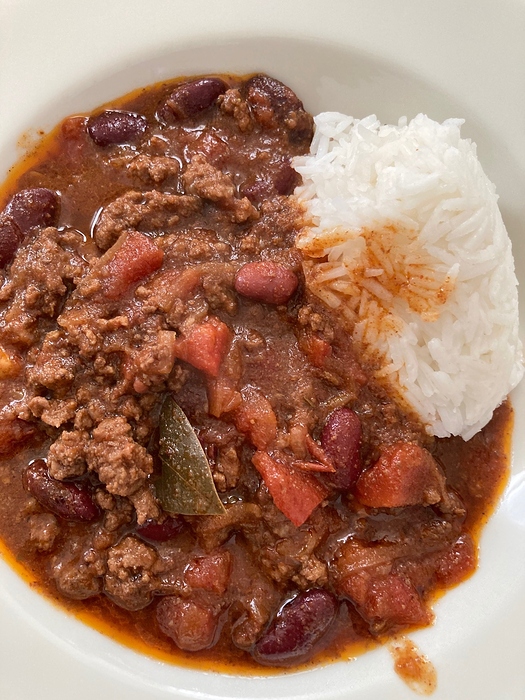 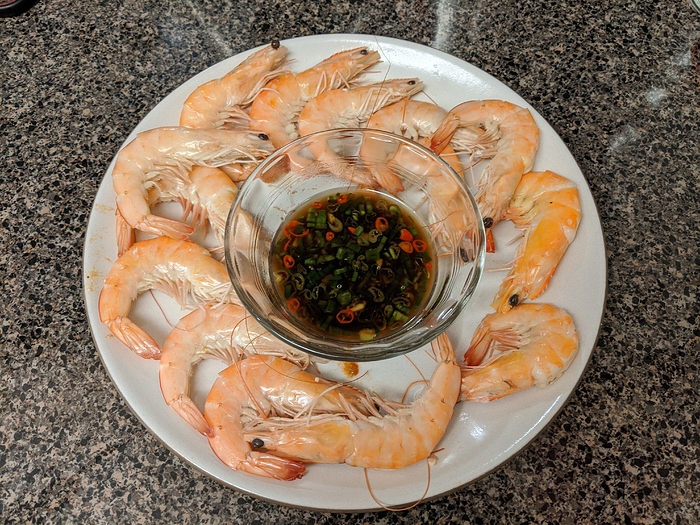 I looooove rice with chili.

Last night in my home town . Plenty of wine . Starry rockfish caught by my freind out of the Monterey Bay . Multiple kinds of citrus to make a ceviche . Walked out to the garden . With eyes wide open
. Pickled onion and pepper . Cheers . Saw everything and everyone ending on a good note . Back in the mountains tomorrow. Cheers . 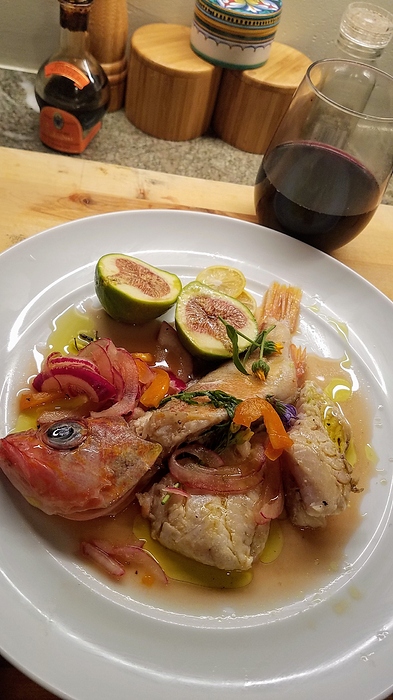 Do I see figs?

Illegal fireworks are rampant in the Bay Area.

And everyone’s dogs seem to be going nuts.

Basically the sauce recipe from here: https://thewoksoflife.com/boiled-shrimp-dipping-sauce/ but with the addition of a sliced Thai chili.

We’ve been hearing M80s right in front of our apartment here in the Mission District for weeks now. I can only imagine it’ll be worse this weekend. Happy 4th, Murika.