What's for Dinner #36 - August and Everything After

No photos but I have to tell you about the amazing shrimp boil I made sous vide. Same recipe as a regular shrimp boil: shrimp, fresh corn, tons of butter and old bay, sausage. Then sous vide for 30 mins 135F.

Delicious and the seafood came out so tender.

Ok, the immersion circulator is growing on me, it was worth it just for this dish alone. I wonder how it’ll do with a bouillabaisse?

Yesterday was my mom’s birthday. She would have been 96 if she lived. Today is my husband’s birthday, would have ben 81. I am smoking rather than cooking paella as opposed to last year for these occasions. had 9 guests and my son, me and my 2 poms.
9 lbs pork loin using Steve Raichlin’s Project Smoke recipe ( bourbon, mustard, Memphis rub, brown sugar ) wrapped with thick slabs of bacon, smoked pear with caramel cream rum sauce, smoked sweet potatoes and pineapple brushed with maple and butter, dizzy ! Forgot to take pictures of the cooked pineapple. peaches and sweet potatoes until after dinner was finished. So, here are some left overs. I followed Rachlin’s recipe but a little twist in that I added Memphis rub to the exterior of the loin which I think made it better than before. The bourbon mustard brown sugar was a hit. So was the caramel cream butter rum sauce.( picture )Also had a salad, and homemade greek spanacopita. We had champagne, and later on chinese dessert, lichee in almond float. !
Another dinner party tomorrow but my son says his friends who are coming tomorrow, spending the day cruising will returning cook for me for a change. They are going to BBQ. Sept 3rd, Labor Day would have been my 44 th wedding anniversary had Bill survived the stem cell transplant. Last. year, we had a paella party ( video by drone but some comment that they got dizzy watching) This y ear, I I will pass as my son says he is going out on the boat again before 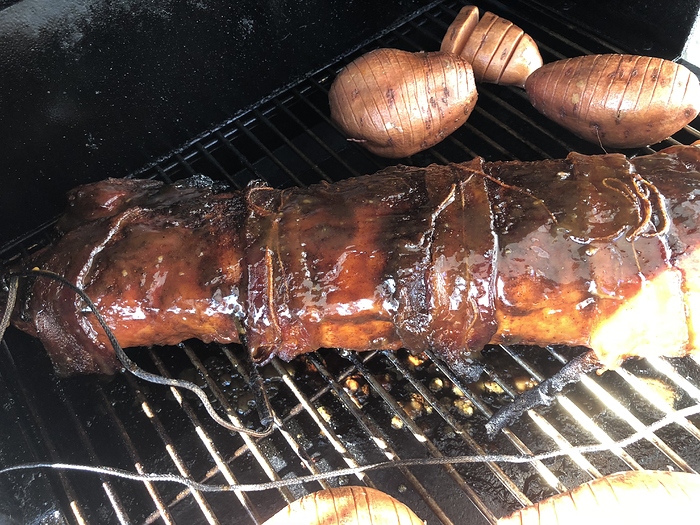 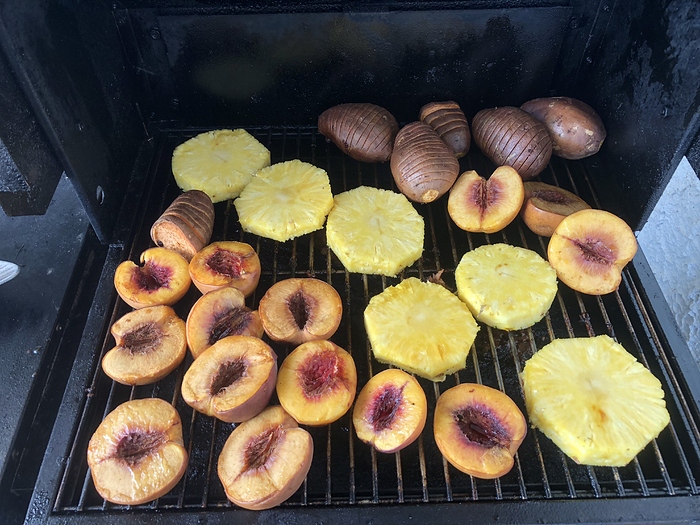 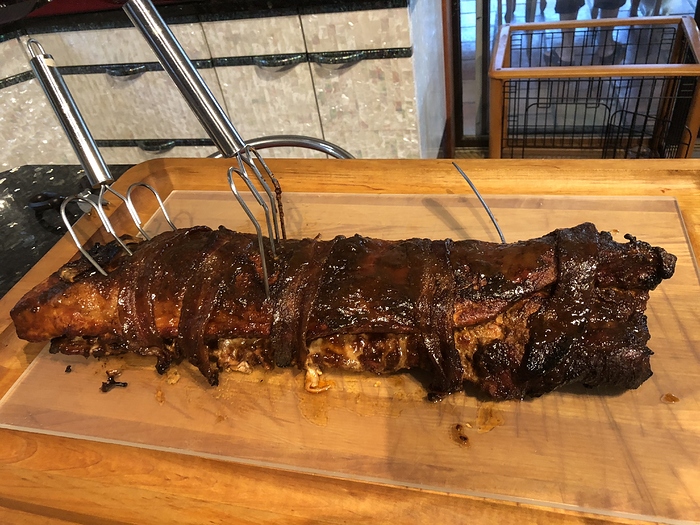 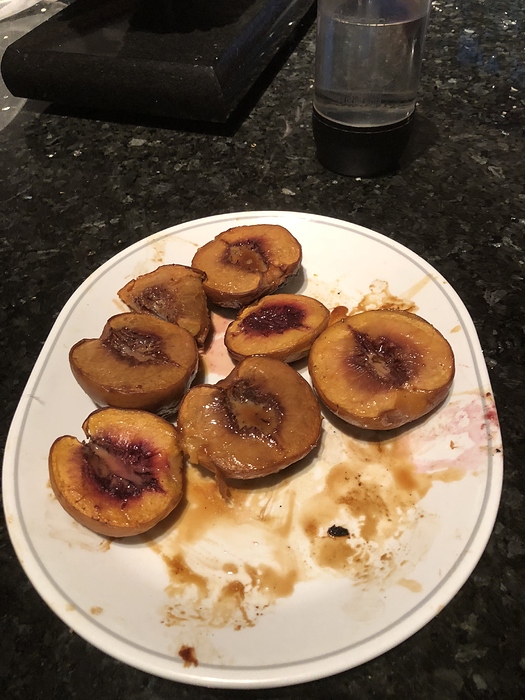 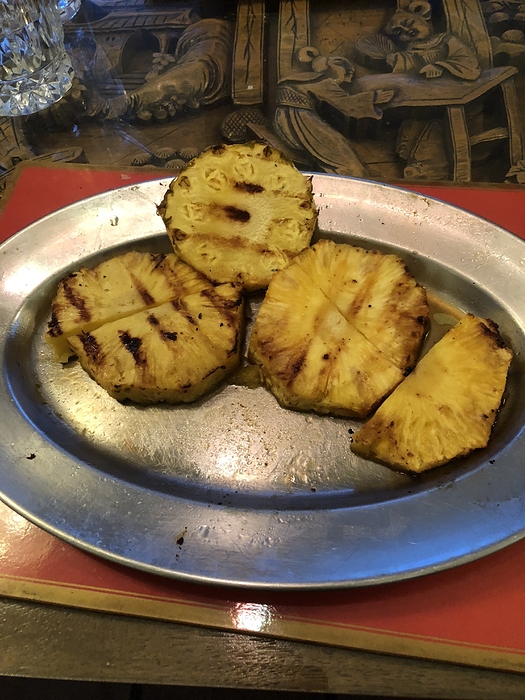 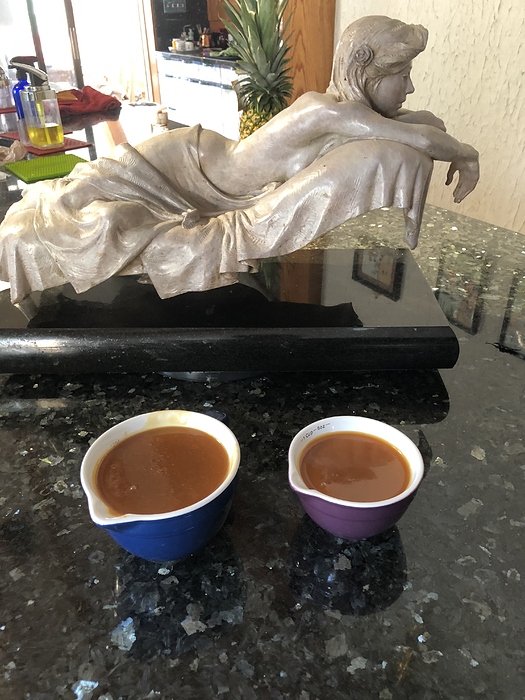 Last night i went over to my sister’s place so we could catch up properly (my nephew was with his dad, her ex) and apparently we referred to the bottle of wine and snacky things- pita chips, olives, cherry tomatoes, jicama- as dinner and followed that with a glass of dessert wine and a pint of coconut bliss ice cream we just passed back for forth

Another amazing farmers market today!! The basket of strawberries never even made it to the car with me… i found this gorgeous rainbow chard, and then chopped and added to some carmelized onions, a little garlic, black pepper, olive oil, dijon, and a splash of white wine vinegar.
Before 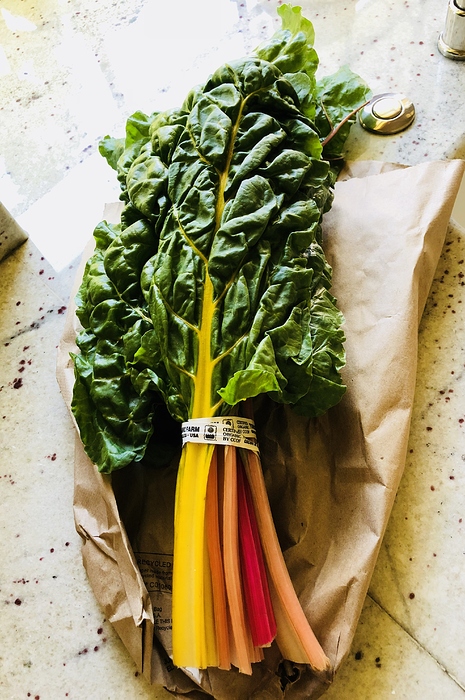 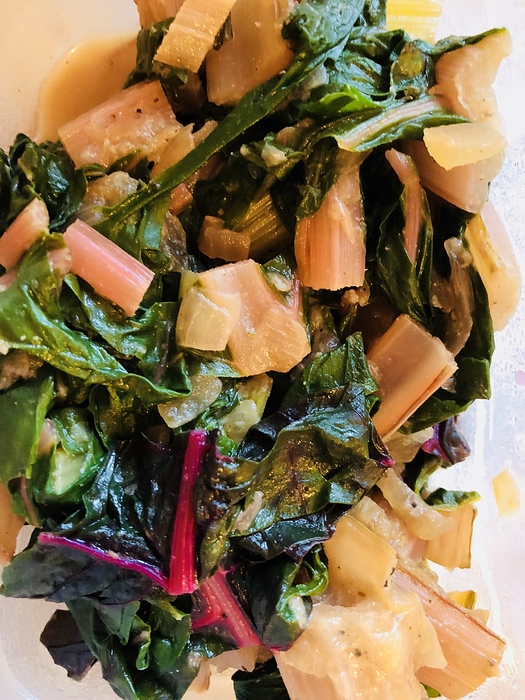 !
We had some of these radishes dipped in salt as an appetizer (my very picky mom eats very few veggies) 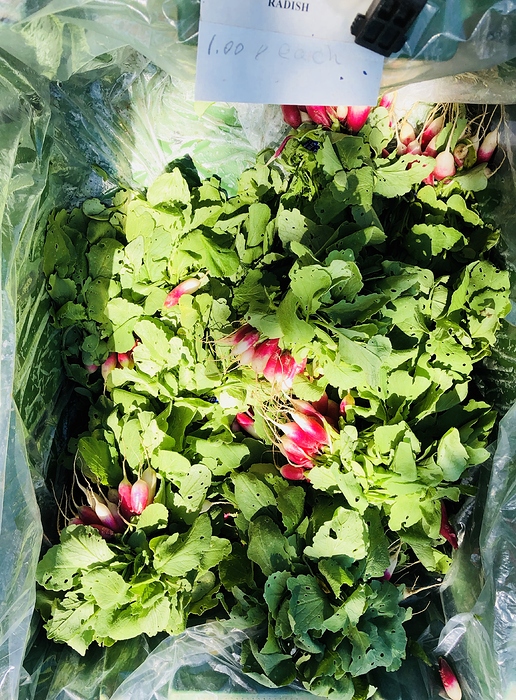 Mom and dad had grilled burgers with the chard on the side and tortilla chips, i went with some raw bell pepper strips from the market today, the chard and tofu marinated in sesame soy sauce and grilled that dad promises “was not at all near the burgers”
Dad and i had opened a random inexpensive bottle of bubbly to drink with, mom is weird and doesn’t like champagne, iced tea for her 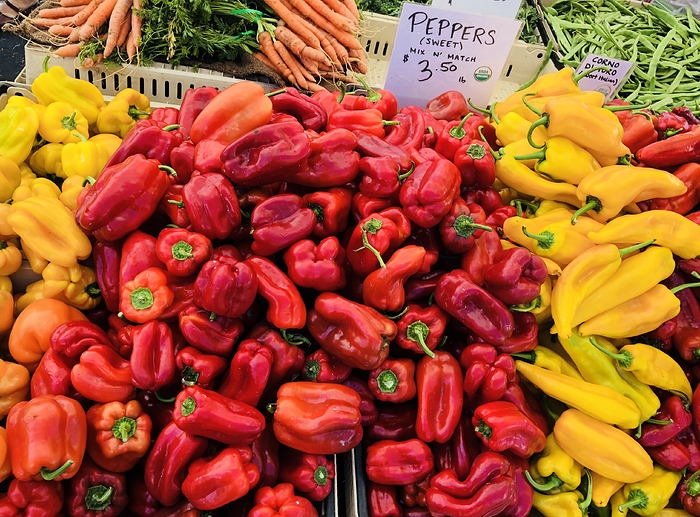 I am literally going to cram my carryon with what will survive my trip back to nyc when i head back…!

Some leaves are starting to drop. Also a slight dip in temperature . A little comfort food to start the weekend. Wine to drink .Cheers 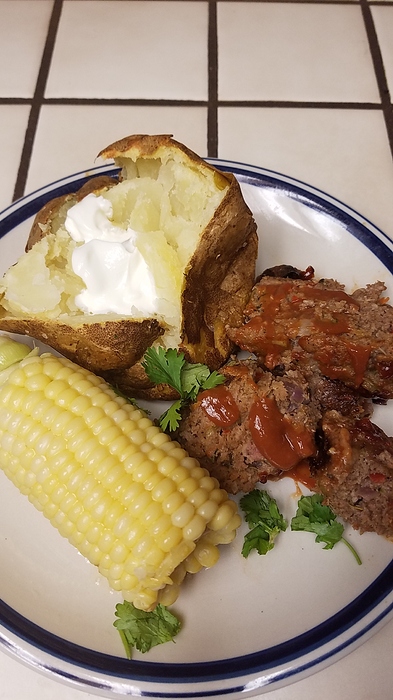 I guess it is not. My BIL, FIL and husband don’t particularly like champagne (maybe it is a family thing for them). MIL only likes it rose. I come across men disliking much more than than women though at parties.

More for us! Seriously though, I think many people have been put off by bad bubbly.

For smokers! Timing the pork loin , sweet potato and fruits

Cut 3/4 of the way through each potato about every 1/8 of an inch, ending up with an accordion-styled potato. . Brush each accordion potato well with butter maple syrup mixture , making sure to get butter deep into the cuts. Sweet potatoes were placed in the smoker together with the loin . ( 350 for 20 min. 175 smoke for 2. hours then 400 till internal temp reached 160 which took 30 - 45 minutes ) Loin was done at 160 degrees but not so with the sweet potato. I placed the peaches and pineapple in the smoker for an hour at smoke of 175. The sweet potatoes were not cooked when the loin was ready but the peaches and pineapple were . Scooped caramel cream rum sauce into the concavity of the peaches, brushed the sides. Brushed the sweet potatoes and pineapple with more of the butter maple syrup, cranked the temp up to 400 degrees. Although the peaches were not sweet, they turned out perfect so peaches do not have to be perfect or ripe. They were ready shortly. Pineapple and sweet potato were ready a bit later. , T had that smoky flavor, with grill marks , potato skins were s quite crispy. I had prepared some fennel pollen spice for fruits to sprinkle on the pineapple but forgot to do it . In retrospect, the pollen spice was not necessary. The timing could not have been better as it took 30 minutes to rest the loin, when the fruits and sweet potatoes became ready.

I am in awe of the efforts you take to make a meal!

Autumn. Fall. It’s not quite here…in fact, the New England area will be having another heat wave in the next few days. But September is the start of the new school year, along with the traffic that comes with moving back to college (Today is “Allston Christmas” in Massachusetts!). Football games are starting for real, and there’s yet more traffic trying to get to the pre-game tailgating that comes with those football games at college and professional stadiums across the nation. So what are …

That’s always so interesting to me! Nights are often around 55 here, even when we are 105 F at 3 PM . I think it’s what makes us different from the south, and why we may not be able to do two seasons of tomatoes.

True. And the sun keeps hiding these days… too bad for the melon.

These casting days and difference temperature between day and night is excellent to provoke flowers in orchids on another hand.

Sorry to hear about that. I don’t know, I have an impression that maybe you should go to see another dentist to see if able to find the problem.

Yeah, that might be the problem about it. If you not satisfied with the service you can always change that. I’ve been in common situation and switched to prosthodontics and never was feeling sorry about it - it’s just feels like i finally get what i’ve paid for.