Smoked some dry rubbed St. Louis cut pork ribs, maybe the best I’ve ever made. Would love to post a photo but I don’t see the icon/link…

Cod with lemon ,butter, and capers. Boiled potato , and peppers with garlic , lemon juice, o.o, and parsley. Wine to drink . 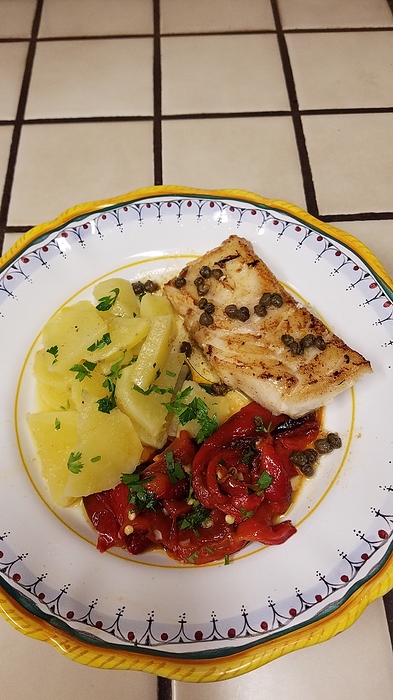 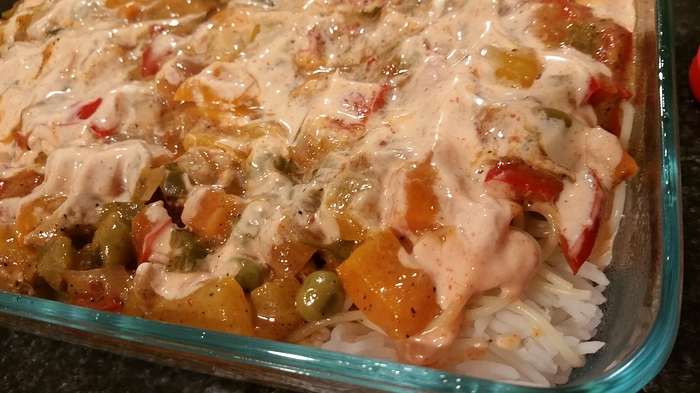 A relative dropped off (Pakistani) Singaporean Rice. First, apologies to Singapore. No one really knows what relation, if any, this dish has to Singapore. Second, it’ll often be misspelled “Singaporian”, so double apologies to Singapore. Third, it’s white rice, topped with plain noodles, topped with sautéed chicken and vegetables covered in a sriracha mayonnaise type sauce, so apologies to food lovers everywhere. I won’t even pretend like it’s a good example of anything. But, to contradict myself, it’s just one of those things we unapologetically like to eat.

I’ve never seen or heard of this before! Looks like it’s strictly Pakistani, from what I see online?

So much carbs, is it good?

This link can help you for uploading photos:

Start a new post, or click Reply: [image] Click Upload icon, the 7th icon with an up arrow: [image] The “Add an image” panel pops up: [image] 4: Click the button “Choose Files” and then select the photo you want to upload: [image] 5: Click “choose” and you will return to the screen you have seen before: [image] 6: Click the blue button “Upload” You will see the photo in the preview window on your right. [image] 7: Repeat if you want to upload more photos. Credit goes to @na…

I’ve never seen or heard of this before! Looks like it’s strictly Pakistani, from what I see online?

Now that you mention it, I’ve never seen this dish made at an Indian household. Kind of like I’ve never seen Chicken 65 made by Pakistanis. But it’s much harder to generalize with India since there are so many distinct cultures.

So much carbs, is it good?

Noodles need oil, in my opinion. So if you make it oily enough, and with enough black pepper and heat, it is good. It is very filling, however.

Also, at Pakistani/Indian parties, you sort of cram everything in one plate. You try to keep it separate, but you’ll always get a few bites where your biryani is mixing with “lo mein” noodles is mixing with fruit chaat is mixing with chutney is mixing with aloo keema, and you might be eating some some naan with it, too. So, although it seems odd at first, there is something familiar about it.

Thanks @naf. I see this is noted as “desktop”. I typically am posting from my smart phone as that’s where my photos are. I’ll go look at the instructions to see if there are different steps for this method…

After a late lunch at a winery in a village not far from the capital I was still full by dinner time. I had sparkling wine in the fridge so it was a perfect thing to accompany some roe. The wine is made “méthode traditionelle”.

Whilst browsing the supermarket I spotted the caviar fridges. The goods were under lock and key. Had to accost an employee so they could open the fridge of course. They left my jar at the check-out and I paid when I was done shopping. You can’t walk round with caviar in your hand before paying. 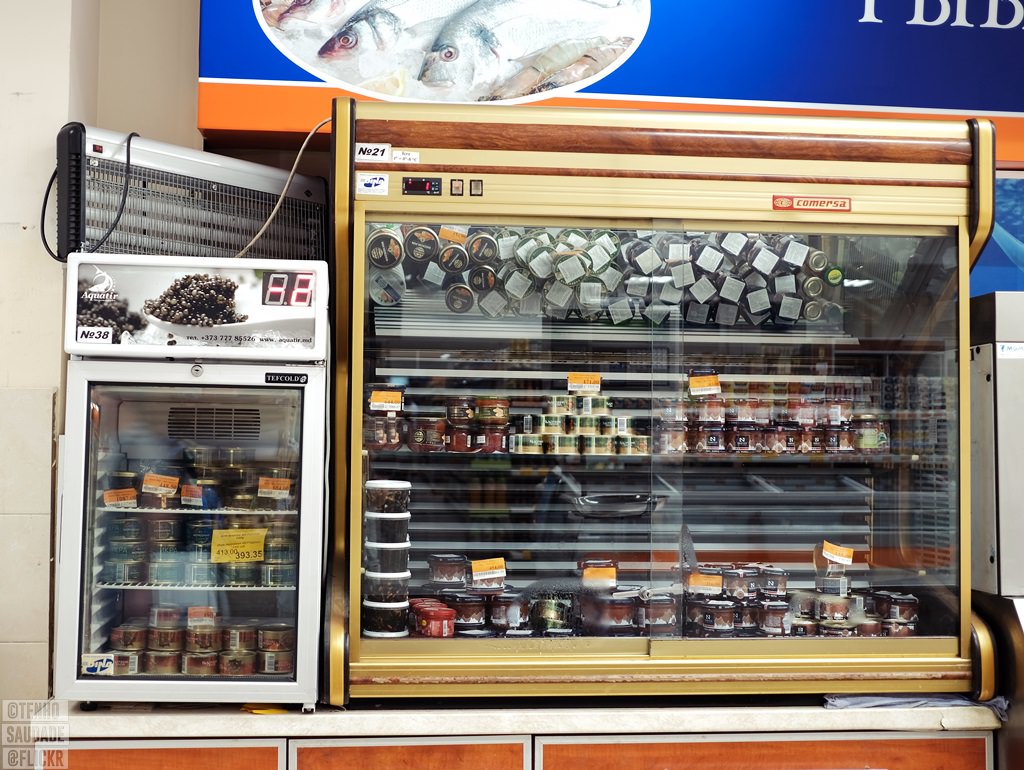 Bester is a hybrid fish, between sterlet (a species of sturgeon) and beluga. Interestingly, the high-tech sturgeon farm where fish are bred and caviar is produced is in a “country that doesn’t exist”. Tiraspol is the second largest city in Moldova but it is not officially recognised. This region is called Transnistria. I want to go there one day. Travellers have reported border control problems due to political tensions. 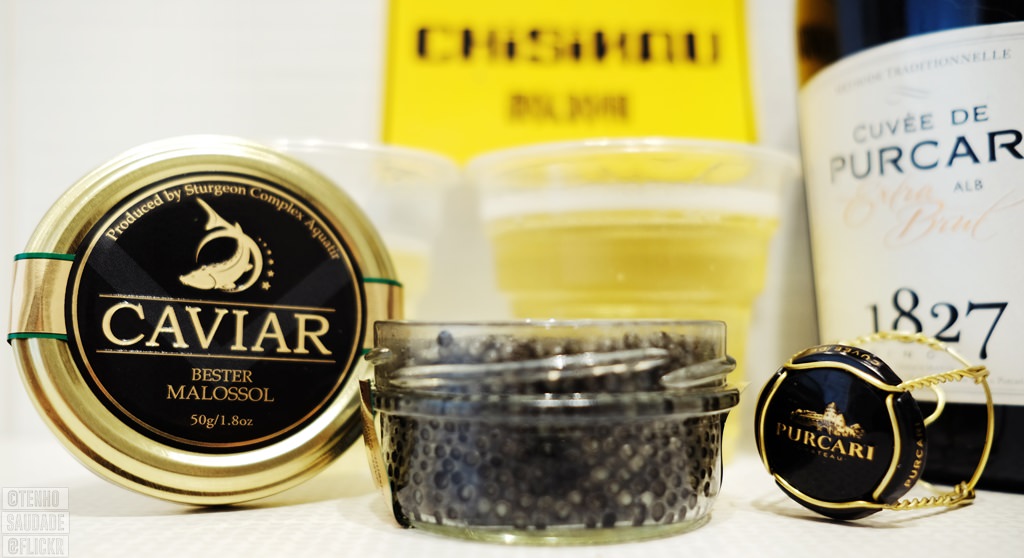 The simplest dinner there is. 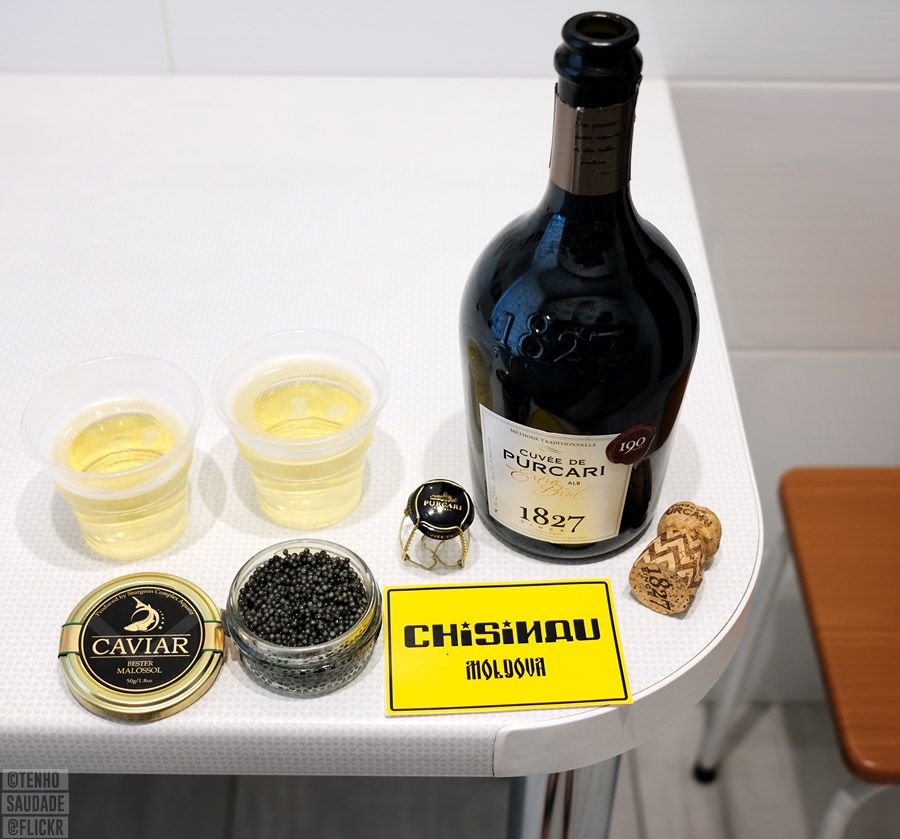 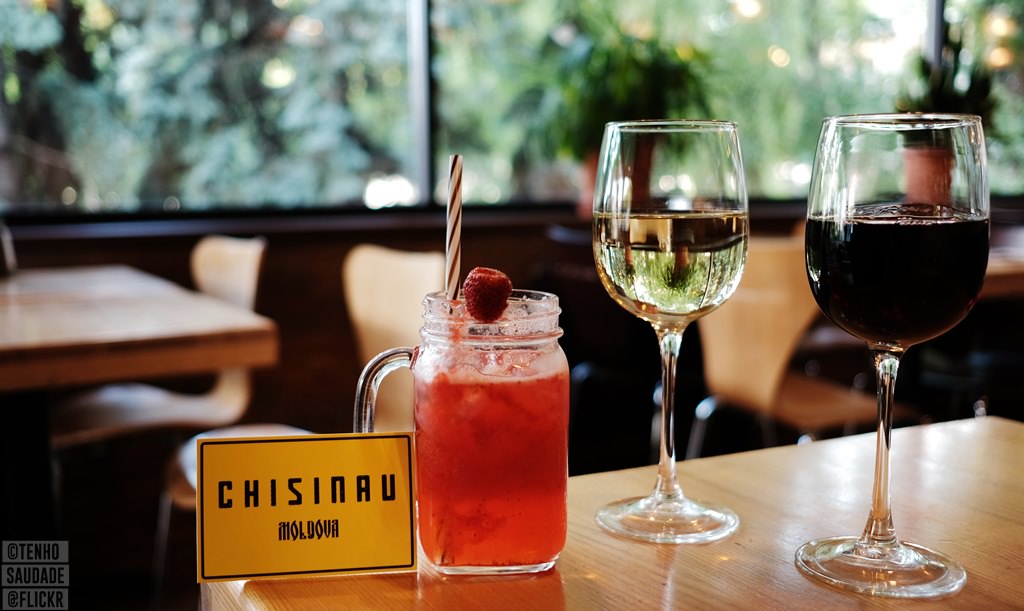 We love beetroots and borschts are up our alley. This Moldovan-style borscht has little ribs. Ukrainians claim garlic rolls as their own, but Moldovans make it theirs anyway. 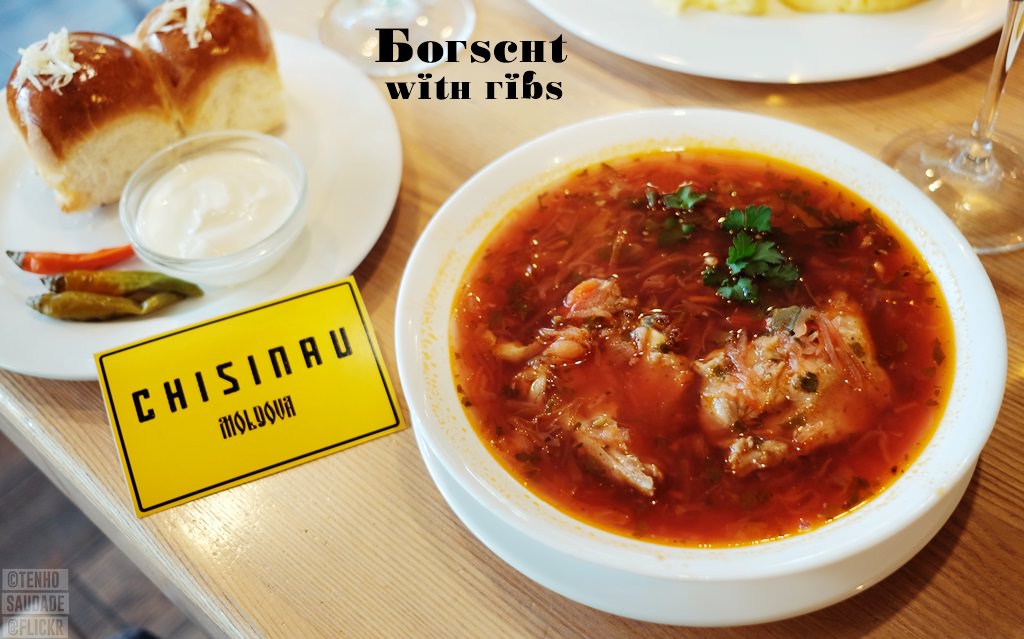 Moldovan version of polenta. The dent is for pouring butter over. 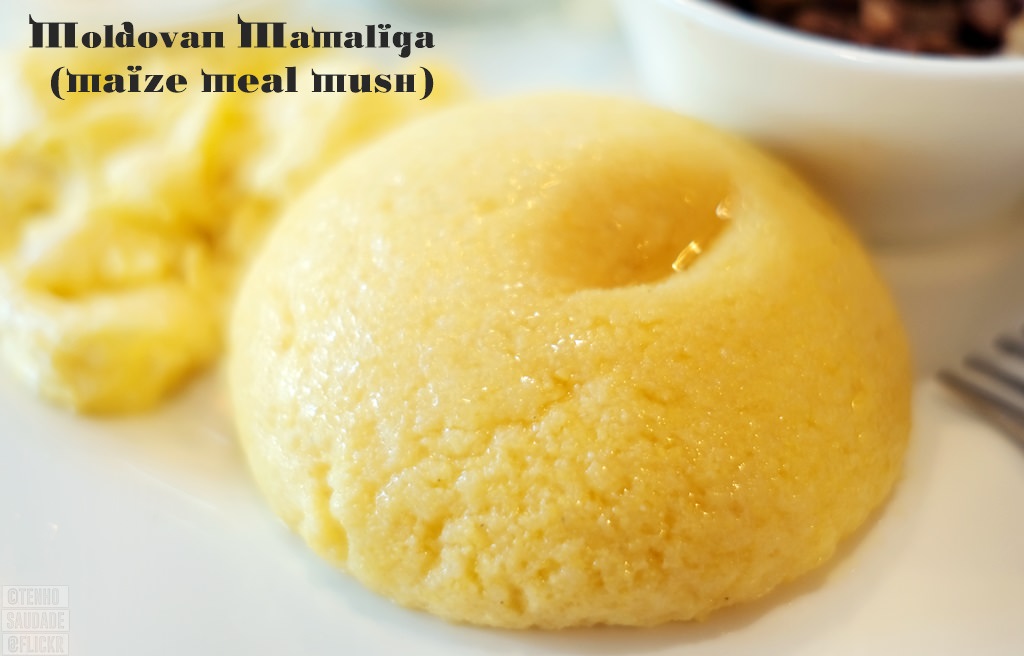 I find the frequent and liberal use of fresh dill and raw garlic rather surprising. Here oil is added as a dip. Fried Speck, scrambled eggs, sour cream and grated brined cheese are on the plate. Save for the Speck, the other 3 things always go together. 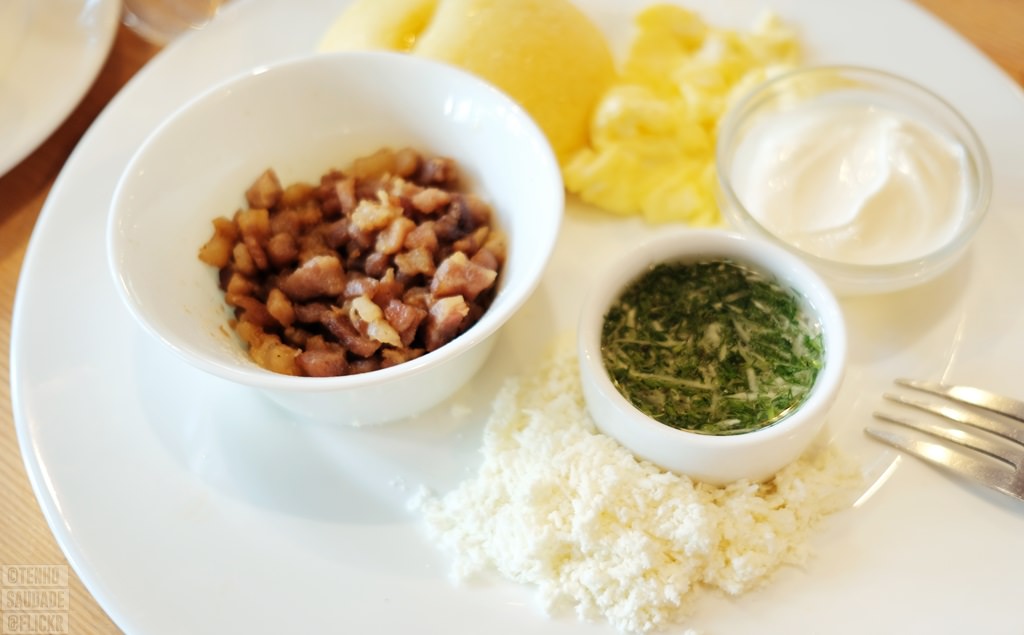 Ancient and polluting old buses still run some routes. Moldova is the poorest country in Europe with the lowest “human developement index” score so these old buses are not going away just yet. They want so much to join the EU. We pay through the nose in taxes, also that money goes to poor(er) member states. If I could I would get rid of the EU and daylight saving time! First thing! 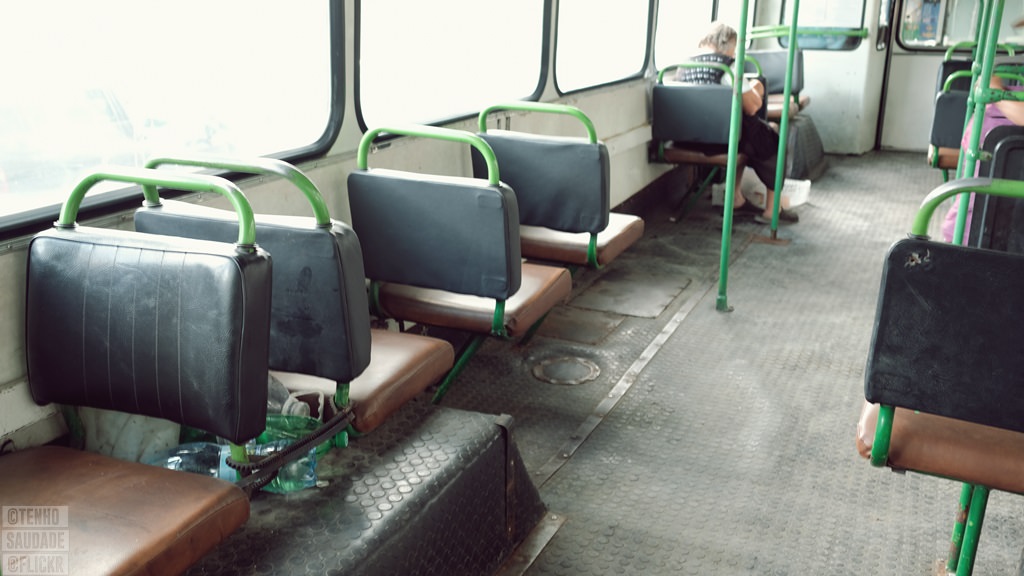 An enormous cloud of smoke whenever these buses pass by. 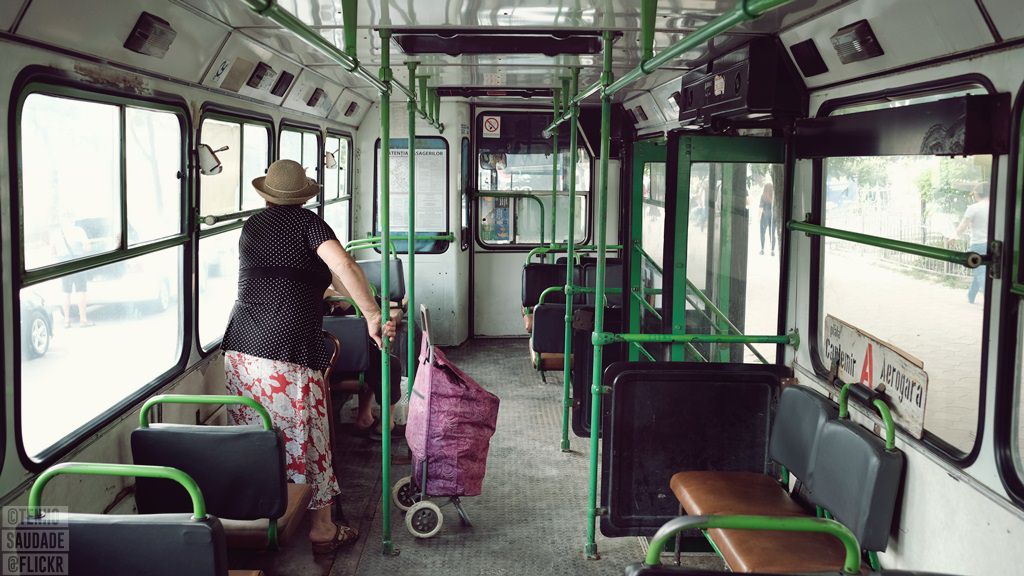 It’s not a place I’d ever considered visiting, but you make it look interesting.

This region is called Transnistria. I want to go there one day. Travellers have reported border control problems due to political tensions.

Ah, yes - I learned about this when tutoring a Romanian government official in English many moons ago.

@Presunto
Thanks for sharing. So far what do you think of Moldovan food?
Can I ask also how much was that jar of caviar? 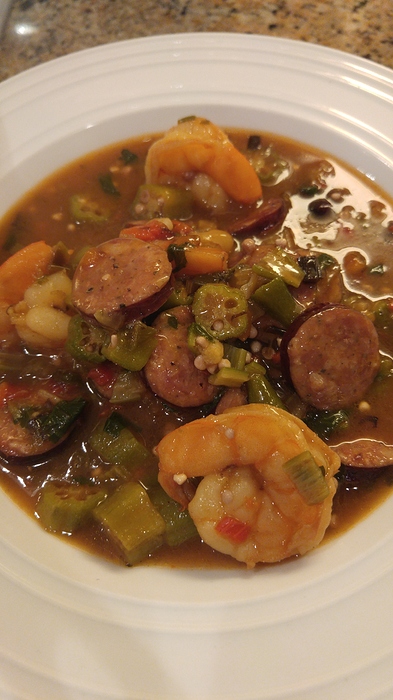 Thanks @naf for technical guidance!

You’re welcome! Could you upload photos from your phone now?

it’s just one of those things we unapologetically like to eat.

The taste buds and heart loves what they love. Go forth, and eat with abandon. 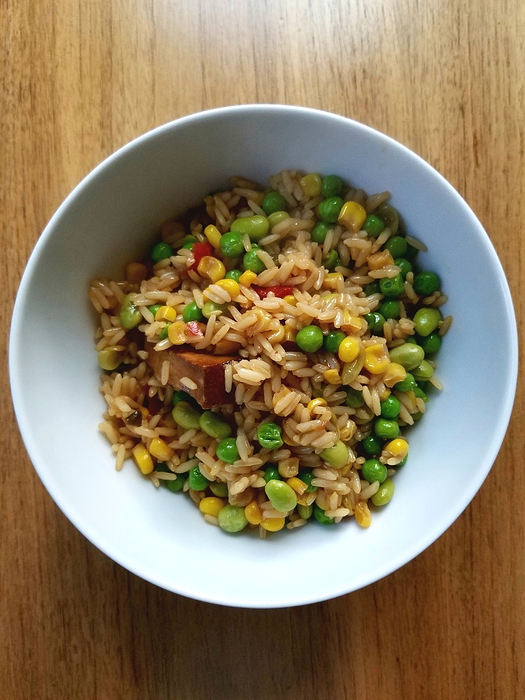 I have two more questions: 1) what happened to most of the old WFD crew that used to be here? Did they all go to Facebook? 2) is it possible, as a feature of one’s profile, to pull up a list of one’s photo posts as it is on Chowhound? I often go through my online “gallery” to find an old recipe.

Slightly more human today- finally! Past few days have been a pathetic blur of green juices, miso soup, delivery thai soup, buckets of tea and kombucha, and today i went to the vegan rastafarian cafe for a “wellness shot” juice that tasted…healthy- thankfully also had enough ginger that overpowered the rest of it.
I picked up a container of their black bean stew for dinner which is sooo not photogenic but surprisingly tasty, especially with some nutritional yeast added. I’m optimistic i’ll feel even better tomorrow and take a short bike ride to get some decent groceries and get back to making myself actual meals again.