Forgot to post dinner last night. Left work during a lull in the downpours but made it home relatively unscathed. Some substantial flooding on several highway exit ramps on the way home. I do feel sorry for the runners in the Boston Marathon, but impressed by everyone who went out and ran and those who supported them! 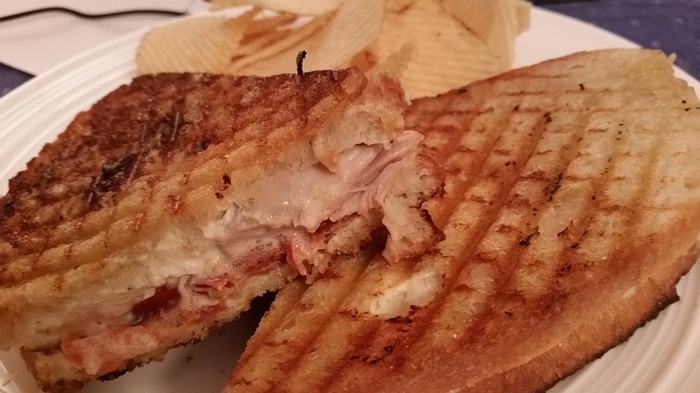 I love salt grilled mackerel, Japanese style. I’ve never cooked it, but order it regularly in bento box for lunch.

I found this recipe online, the skin gets very crisp and nice with this method, which I use for salmon. It’s even better if you have a charcoal grill.

I was going to chime in (2 days late) that Koreans also do a similar prep of mackerel. I’ve never attempted at home, either. When a restaurant does it well, the skin gets so crispy and the flesh is never dried out.

The leftover Bolognese, along with bechamel, more fresh pasta, parm and mozzarella turned into a tasty lasagna. Lots of leftovers for midweek. 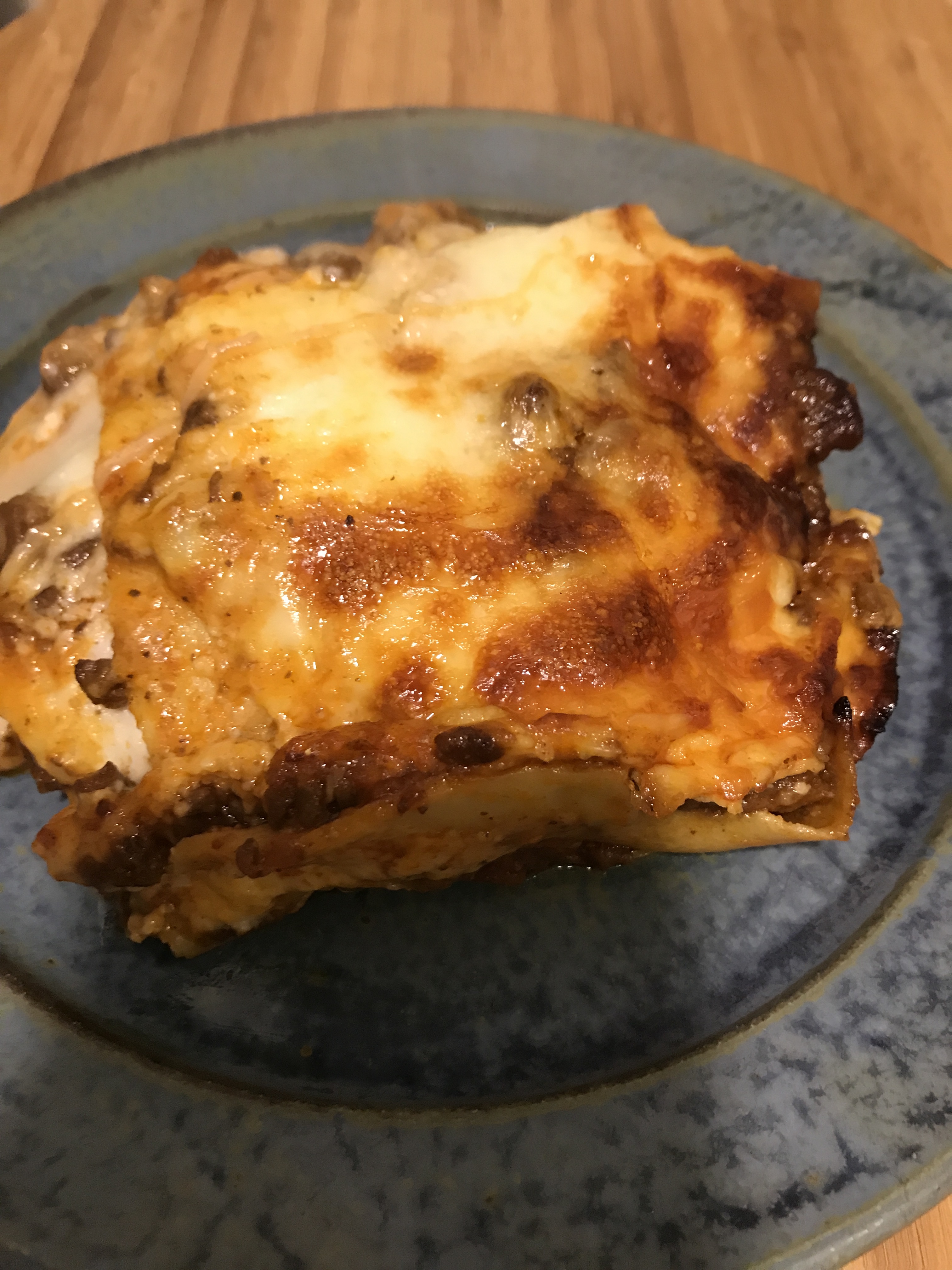 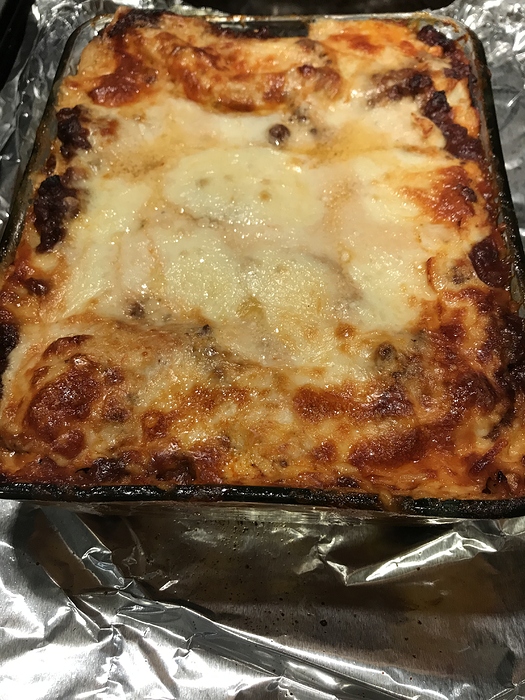 Not on a Monday. I usually try and keep that to almost-weekend and the weekend itself. Besides, I was tired and ended up conking out on the couch for about 20 minutes before I turned off the TV and dragged my sorry butt up to bed.

I meant to say the best seat on the plane is next to an empty one. Sorry it was not clear.

After 10 days of Austrian food I kind of missed something spicy. Sichuan spices in my food again today. Razor clams with ginger, salted black beans and Laoganma (Sichuan chilli flakes in oil). 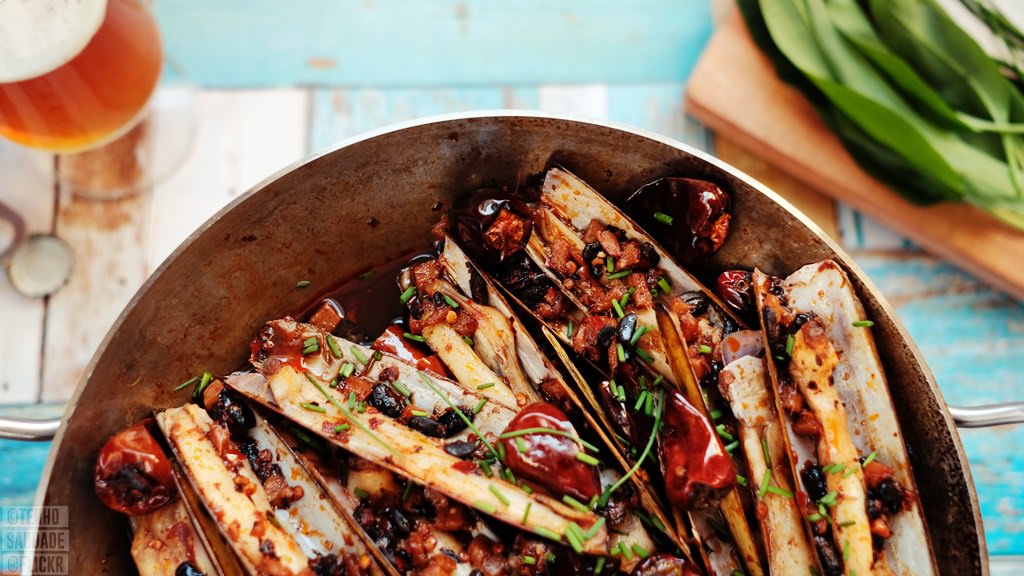 It’s good to be back in my own tiny kitchen. I hate using someone else’s knives and things. Next time I check in my bag and my knives. 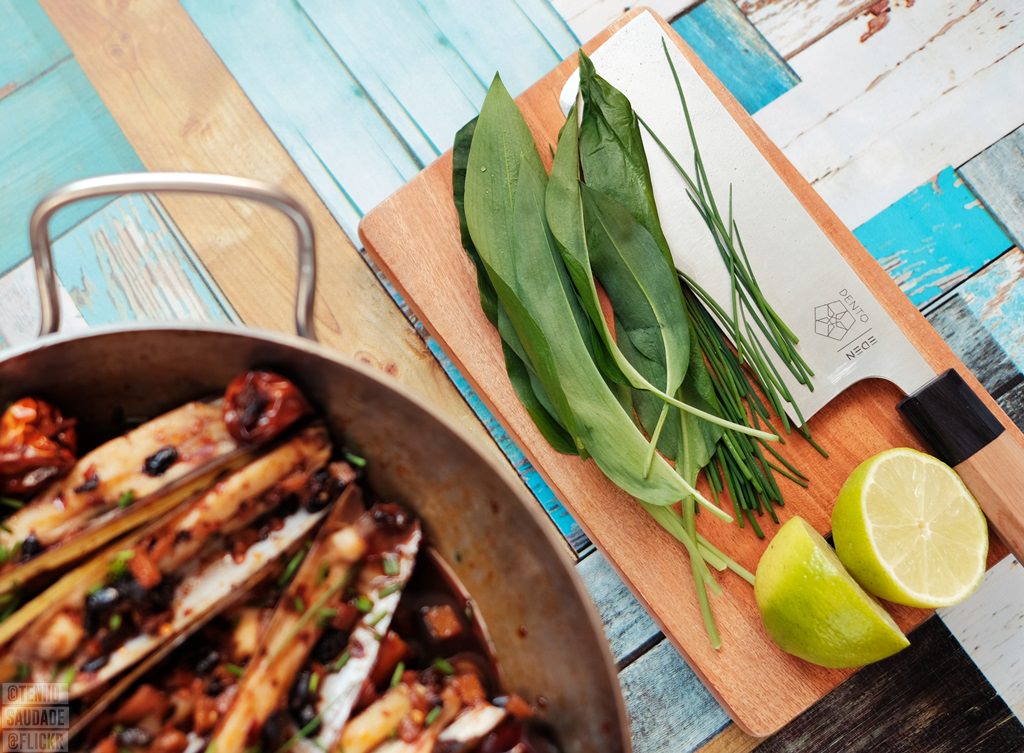 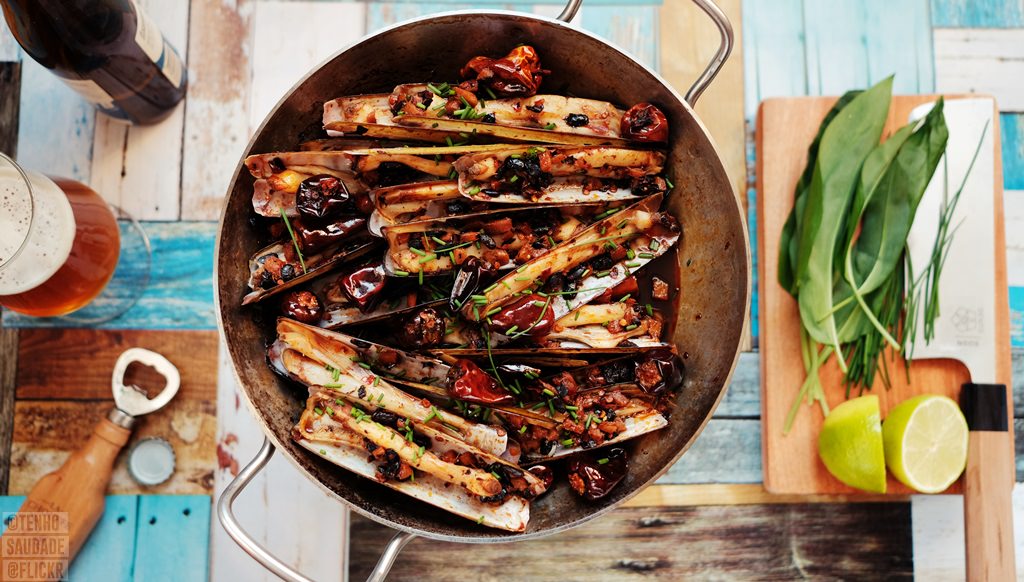 Not on a Monday.

You’re a stronger woman than I, Linda! And your sandwich looks really wonderful. Crunch, gooey and rich.

I only drink wine 2 times a week. On weekdays and weekend. Hah!

It used to be with dinner every day but not since 1 and a half years ago. I also drink half the amount of beer I used to. Why can’t I consume unlimited amount of cheese and beer/wine without (health) consequences?!

LOL! Cooking with crappy knives is one of my pet peeves. Especially noted when in rental places!

I travel with knives when we went to the Keys and when going to my In Laws for holidays. Basically anywhere I anticipate cooking

never cooked with razor clams
they are so expensive here
They look fantastic ! Can almost taste them!

Got home at a reasonable hour to make a salad for dinner - lettuce, chopped leftover chicken, sliced radishes and cukes, shaved and chopped carrots, a few tomatoes that were starting to wrinkle, goat cheese, and croutons. A quick honey-mustard dressing on top. 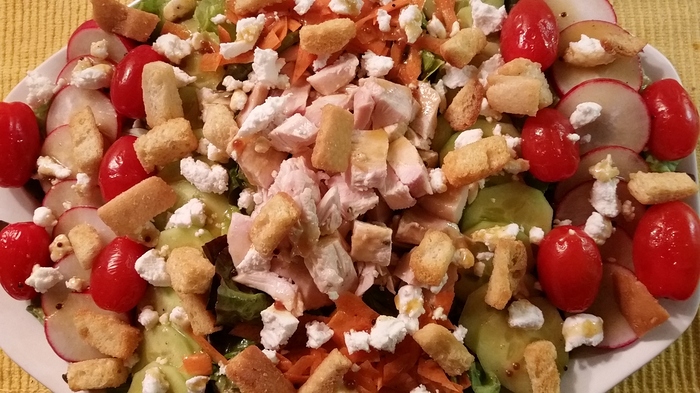 Steelhead trout with brussel sprout and carrot saute and salad 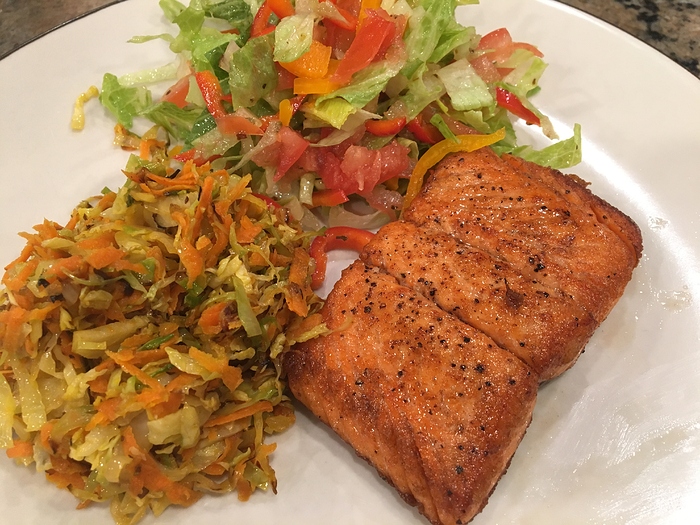 Leftover lasanga is the best.

Been busy keeping it simple sausage and peppers tonight an old standby. Its winter cold again heat is on im ready for summer. 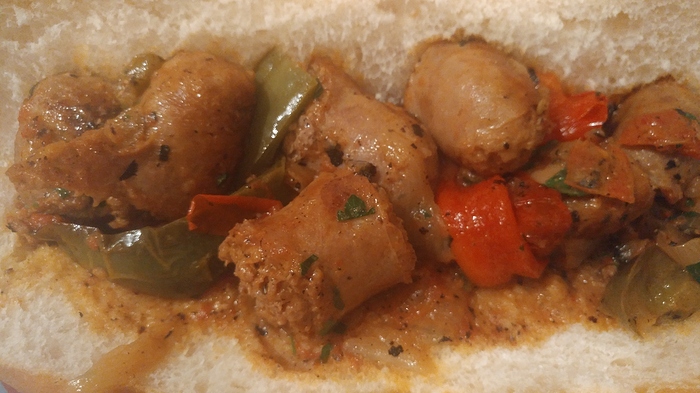 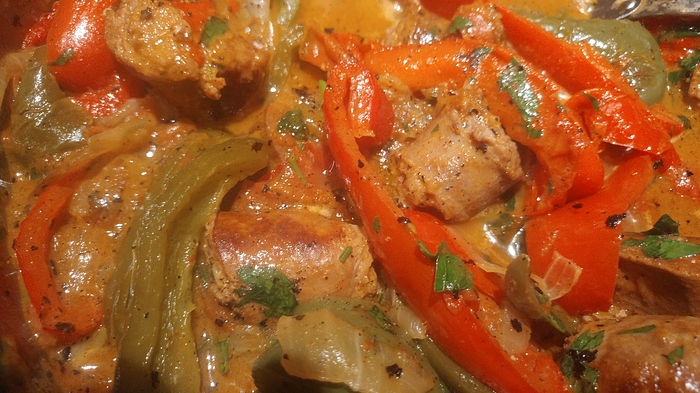 It was a tough choice tonight. Zucchini came in first. Mashed potatoes and gravy second. And in the very close race pork chop topped with gravy. 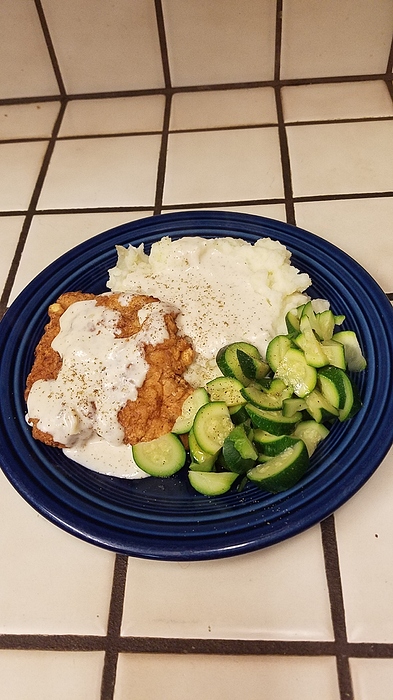 Dinner idea #1 was an Epic Fail.
I have a great veggie spiralizer thing i recieved as a gift a few years ago and decided that the two random zucchinis i had should be spiralized and sautéed and i would top them with some thick beany tomato based stew from the freezer.
I swear they were in the pan with a little oil- nothing else! no salt, nothing- for nanoseconds before turning into a soft wet mess.
Ick.
It was cold and yucky today because it’s apparently still winter so soup sounded like a good enough way to use them.
Garlic, onion, a spoon of better than bullion veg base, some canned coconut milk, the sad soggy zucchini, salt and a hefty amount of white pepper, and good sized chunk of medium tofu went in the pot. I blitzed it smooth with the immersion blender. Wished i had cilantro or basil on hand, the neverending dill seemed like a bad idea. Added a squeeze of lime to my bowl and some of the crunchy seedy mix from trader joes with a little handful of hemp seeds.
Worked out pretty good! Crazy super bubbly overflowing the bottle ginger lemon kombucha a la carte.
And i’ll just keep having zucchini noodles raw if/when i make them again.
Apparently wasn’t filling enough, a few hours later i had an apple with almond butter with my tea

I was also thinking about spiralizing the zucchini. Was going to use the vegetable peeler to make thin slices. Ended up cutting it up into pieces and simmering in little water. It was still the star of the show. I did think about the soft wet mess.

I made dry wantan mee (i.e with the soup on the side, rather than the noodles in the soup). It was the same process as the one I made and posted on the Malaysian cuisine thread.

One of my favourite dishes in my time in Malaysia was wantan mee. Usually all the ingredients are are in the one bowl in the soup. I preferred it dry, that this the wantans and soup on the side and the noodles and pork separate. Also often the char siu is quite thin, except in Kuala Lumpur where it was always quite chunky. So I made my version of a dry KL wantan mee. For the soup I sweated off one bashed roughly chopped stalk of lemon grass and ginger. Added a star anise and some pre soaked wo…


However the soup was more like the ones I had in Malaysia as I found some wantan soup powder. I used less than directed as it smelt pretty strong stuff and I also browned off chicken wings and added them and some cabbage to the soup when I made it. I didn’t add any star anise, lemongrass or mushrooms to the soup this time.

I almost forgot the pickled chillis for the noodles but remembered before we ate it. 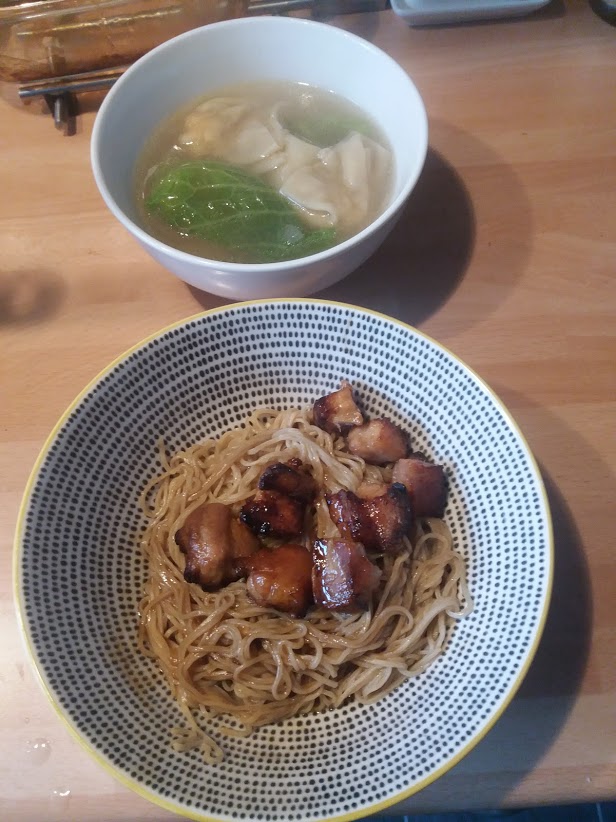