Tried making some char kuey teow using this recipe, minus the bloody cockles. Came out ok but I think I need to work on my stir frying skills. 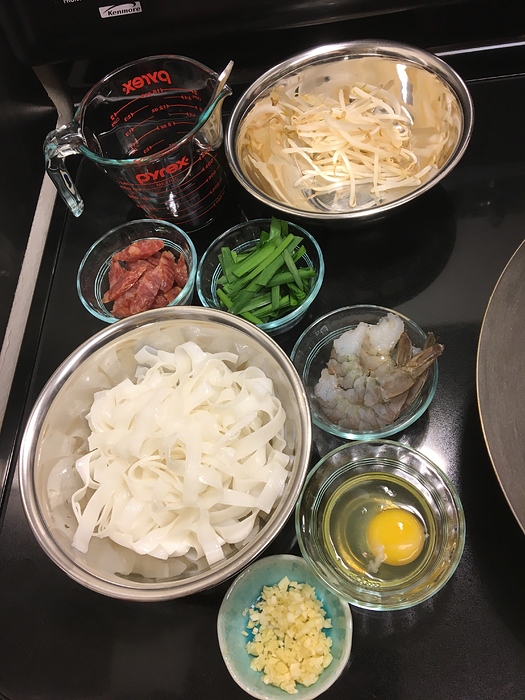 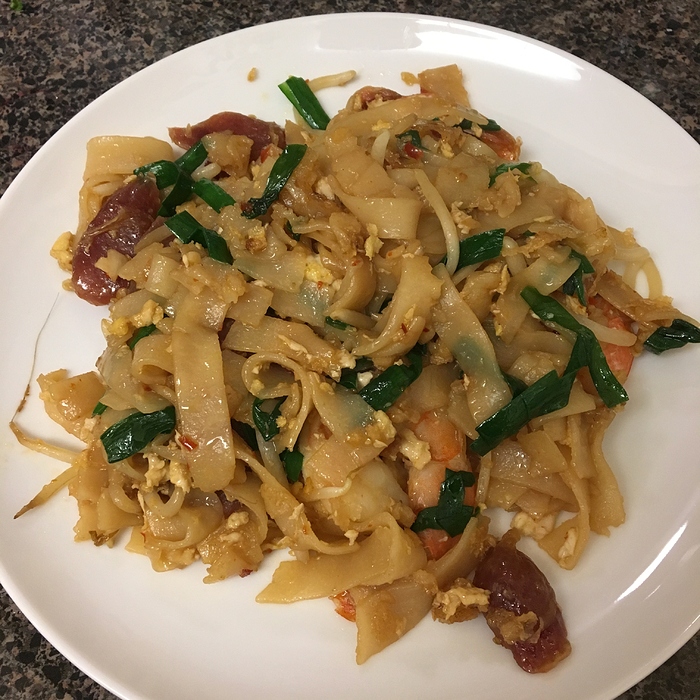 Tried making some char kuey teow using this recipe, minus the bloody cockles. Came out ok but I think I need to work on my stir frying skills.

Looks good! I also skip the cockles – I’m not a fan. I always ask for them to omit them when I’m ordering CKT at a stall/shop. Sometimes they ask me 2-3 times if I’m sure I don’t want them!

I’ve been wanting to make CKT for a few days now but haven’t had time. Maybe this week if I get a chance!

UI think that is chaw fen ( not sure of the spelling as different dialects pronounce it differently) It is a difficult dish to master. It looks good.

Both recipes from Ping Coombes book “Malaysia - recipes from a family kitchen”. Although not slavishly followed - e.g. I bought a peanut sauce from the supermarket for the starter, rather than making from scratch

Dessert, FWIW, are from the French patisserie a few minutes drive away (and which recently won the “best producer” award in my Sunday newspaper’s competition. Absolutely nothing Malaysian about them, although there is a use of lychee as a flavouring in the entremet.

I made curry me, a few days ago. I had to compromise on some of the ingredients but have since been to the Chinese supermarket so will remake and post a recipe. 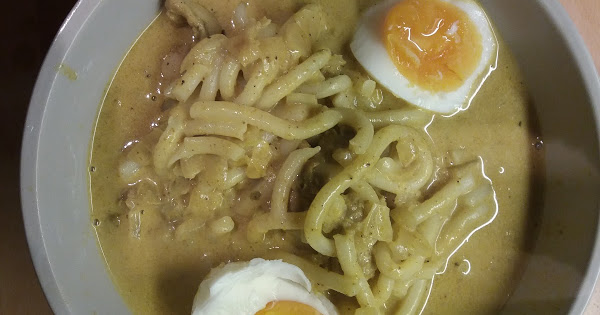 One of my favourite dishes in my time in Malaysia was wantan mee. Usually all the ingredients are are in the one bowl in the soup. I preferred it dry, that this the wantans and soup on the side and the noodles and pork separate. Also often the char siu is quite thin, except in Kuala Lumpur where it was always quite chunky. So I made my version of a dry KL wantan mee.

For the soup I sweated off one bashed roughly chopped stalk of lemon grass and ginger. Added a star anise and some pre soaked wood ear mushrooms. I added 2 litres of chicken stock and through in an inch square piece of belly pork and some cabbage leaves .I simmered for 1 hour ( I took the star anise out after half an our as it was becoming over powering. I seasoned with fish sauce. I strained the soup. Before serving I reheated the soup adding shredded cabbage and frozen pork wantans. The result was tasty but too dark and heavily flavoured. For wantan mee something lighter and more delicate was needed. It tasted more like bak kut teh, I still have some in the freezer so it will come in handy for that,

The pork and noodles were more successful and tasted fairly close to those I’ve had. I diced some belly pork and fried until the fat had rendered and crisped up. I then coated in a mix of honey and dark soy sauced and put in the oven at 180c for 25 mins. I took care to keep the rendered pork fat and keep it warm. Once the pork was done I served it over cooked fresh wantan noodles ( 1-2 mins boiling) ,having dressed the noodles with the pork fat , oyster sauce and dark soy sauce. I also added ppickled green chillis. 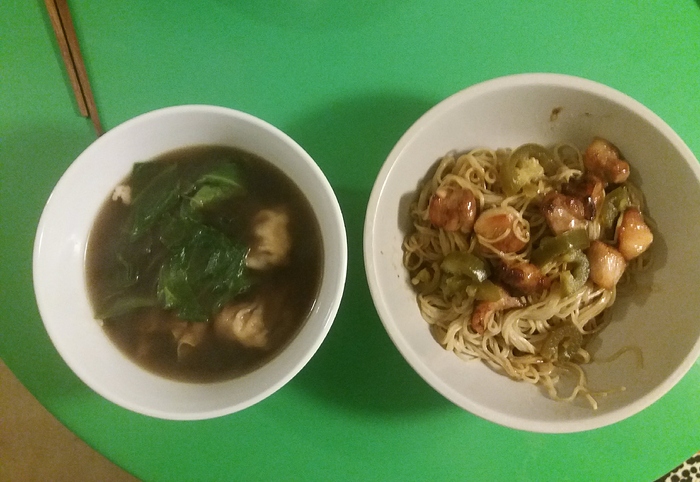 Been busy the last couple days, but wanted to share our dinner from Saturday night. My mom was over and decided to cook Malaysian food for us.

Dinner was coconut/pandan/ginger rice (aka nasi lemak rice), shrimp sambal, egg sambal (less spicy than the shrimp for my young nephews) and sodhi (indian style coconut gravy/soup) with cabbage and carrot. I made the sodhi and mom made the rice, eggs and shrimp. So good that we all took second helpings! Do you like my banana leaf plates? 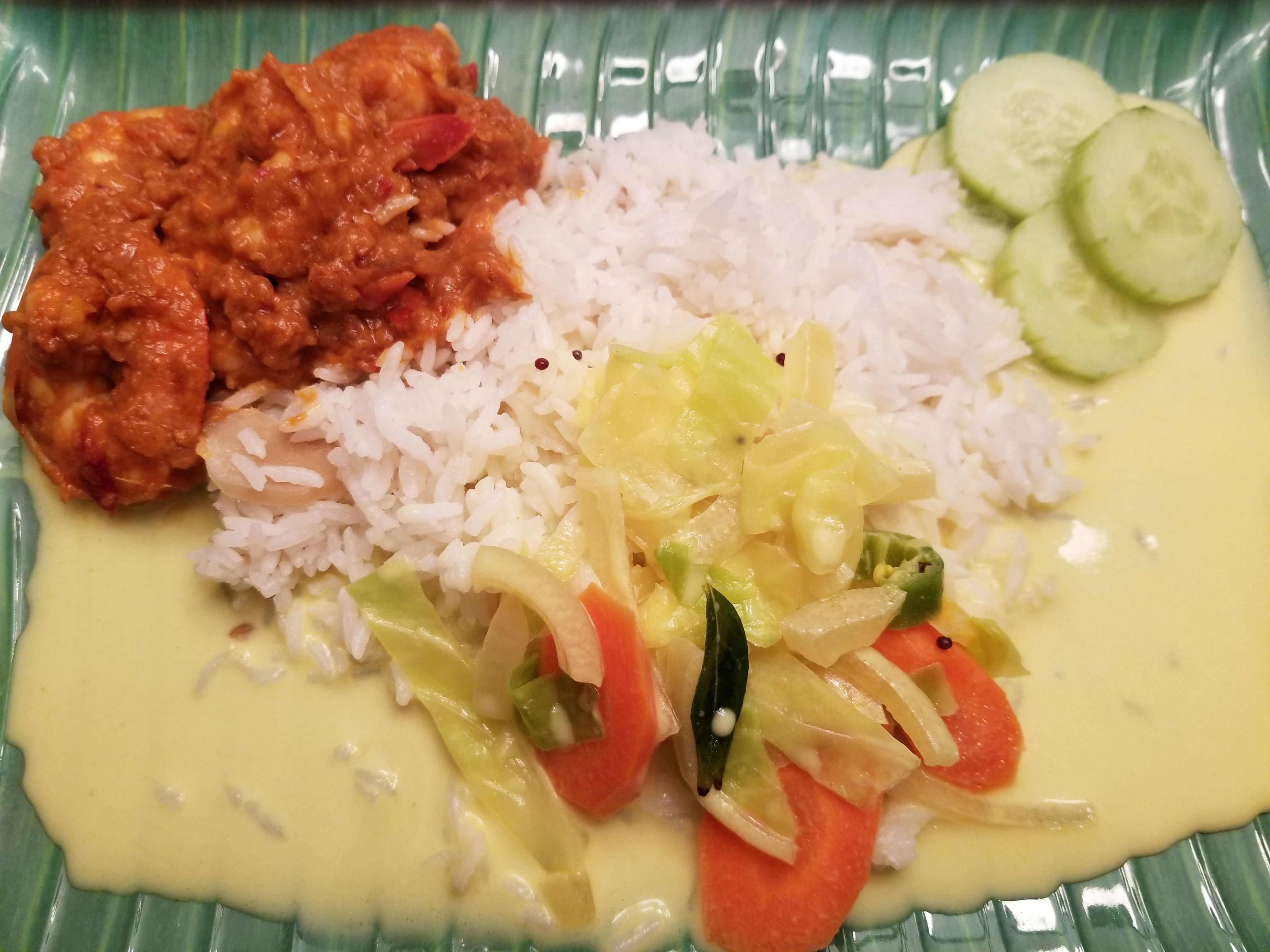 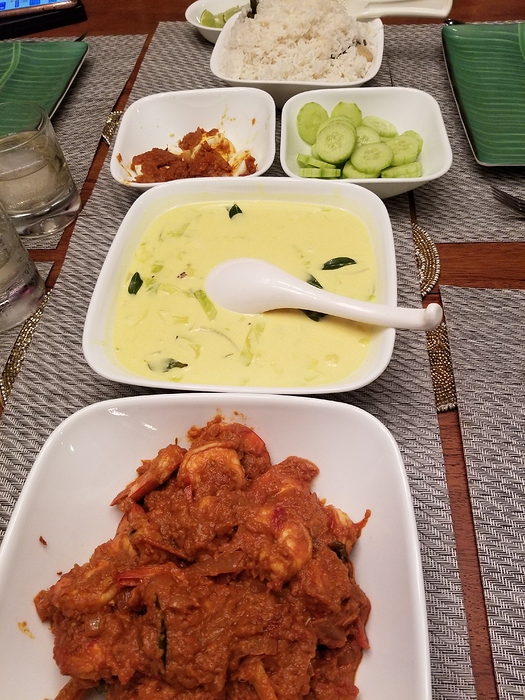 I’ve cooked a lot of Malaysian this week .

Monday was nasi lemak with lamb curry. I forgot the cucumber though. 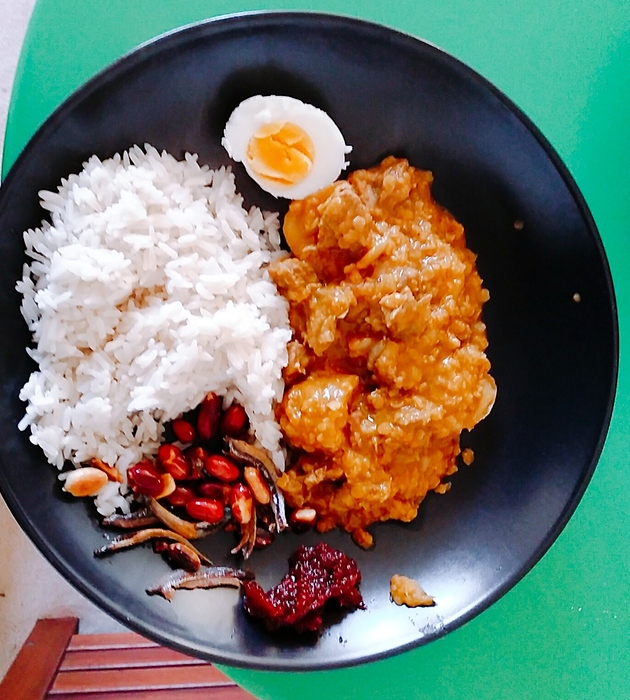 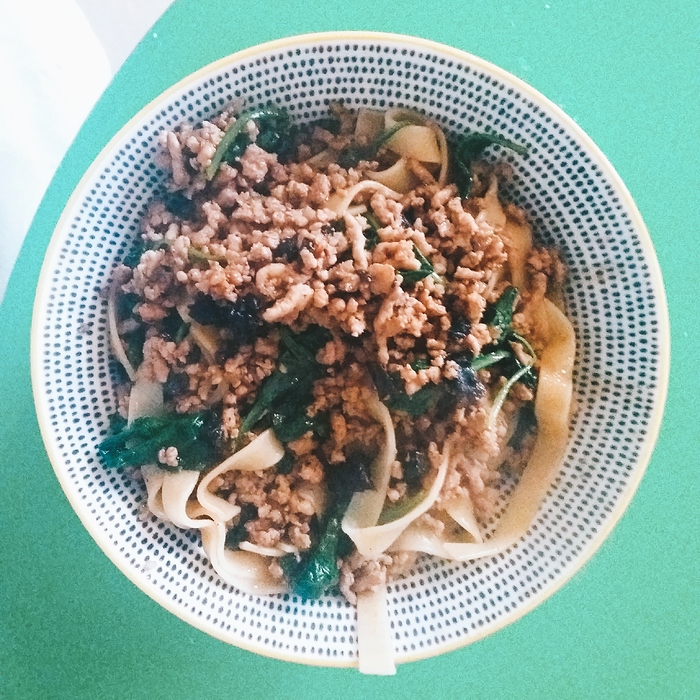 Last night was nasi kukus ayam berempah. Very popular in Pahang on the East Coast of Malaysia. I ate it quite a lot as you can tell from this post. I used chicken wings rather than chicken feet to make the gravy, the missus drew the line after the chicken feet dim sum incident in Ipoh last year.

Nasi Kukus Ayam Berempah is a dish of steamed rice and fried chicken with a spicy coating that’s quite heavy on the turmeric though each place has their own mix. It’s not just the chicken and rice the accompaniments of chicken gravy, chillies and ginger in vinegar and wedges of cucumber are also important. It’s safe to say that it is something of a local favourite in parts of Malaysia particularly in Phahang. I have been in Cherating (a small village on the coast ) in Pahang state in the … 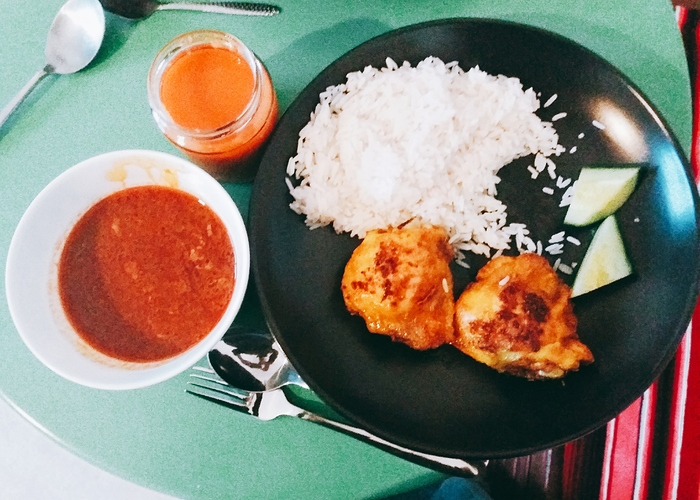 the missus drew the line after the chicken feet dim sum incident in Ipoh last year.

Delicious your meals! I would like to do some dishes, but had some psychological blockage in approaching MY cuisine. The difference between the MY version and the Chinese, Indian, Indonesian sometimes were very subtle and the lines were not very clear for me.

Do you have recommendations for books, sites / recipes for cooking?
TIA

It won’t be the same, the gelatine presents in the feet is not there in the wings.

We went to a dim sum place in Ipoh where you had to go up to a central station to pick your dim sum. The siu mai and har gow were easy to spot. I took a punt on some battered/breaded items. They looked similar to some mini pork ribs I’d had in Singapore. Turned out they were chicken feet. This followed hot on the heels of having such noodle soup in Penang with @klyeoh which had a surprising amount of pig offal in it.

Do you have recommendations for books, sites / recipes for cooking?

TBH I don’t use cookbooks all that much. I’ve been to a Malaysian cooking class where I learnt the curry and nasi lemak dish.
For the pan mee I checked a few internet recipes and the one that seemed right and closely matched the ingredients I had was the one I used.
Obviously I’ve eaten a lot of nasi kukus ayam berempah so I made an educated guess. I know Malaysian fried chicken is heavy on the turmeric so I used quite a lot in the paste and the version I liked most definitely had lemongrass in it so I put that plus fennel seeds in the paste. For the gravy I treated it as a curry/ gravy hybrid. I used Malaysian curry powder and also added star anise and a cinnamon stick. I will post a full recipe if you want.

It won’t be the same, the gelatine presents in the feet is not there in the wings.
[/quote]

I thought about that but when I left the left overs gravy to cool it set like a jelly.

Note that this episode of Chicken Rendang becomes a bigger issue, now even MY politicians gave their opinions, our discussion here will continued in this thread:

I don’t think the hosts even know what this dish is supposed to look and taste like. Malaysians around the world were not amused. Excerpts: “I like the rendang flavour, there’s a coconut sweetness. However, the chicken skin isn’t crispy. It can’t be eaten and all the sauce is on the skin so I can’t eat it,” Mr Wallace remarked. … The rendang was served alongside nasi lemak, often seen as Malaysia’s unofficial national dish (also found in Singapore). The dish consists of coconut milk-infused… 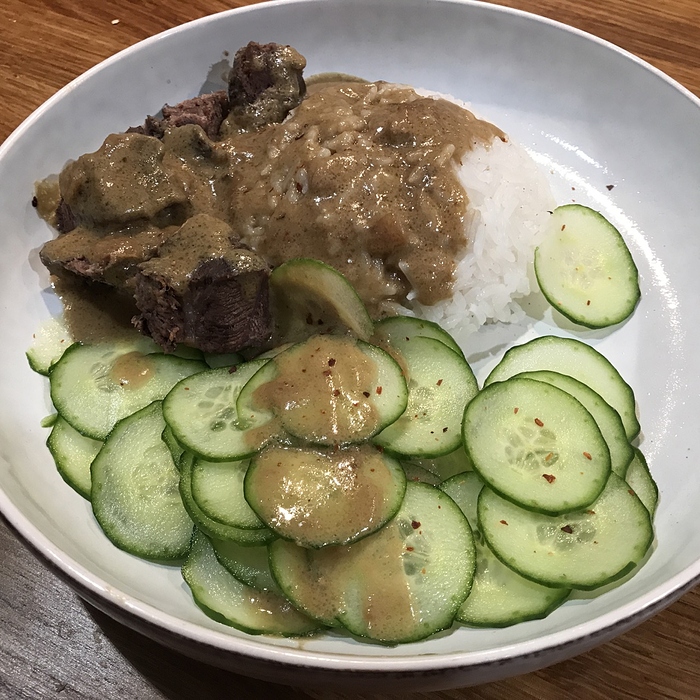 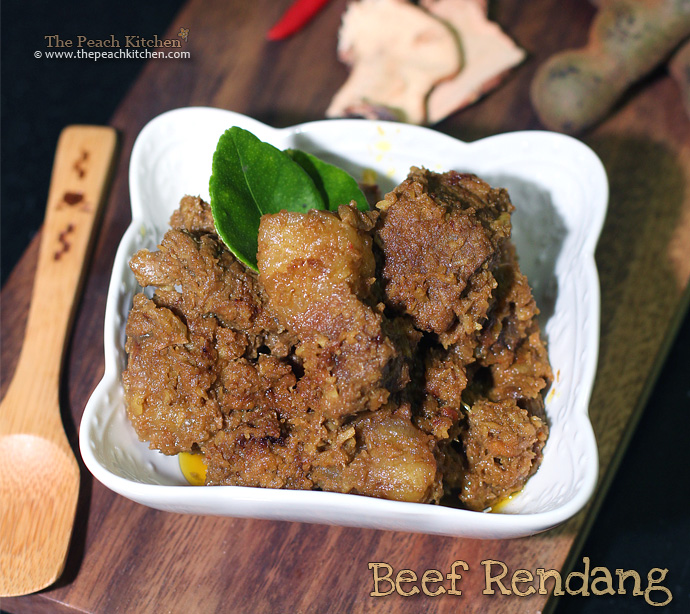 So it was my sister’s birthday yesterday. I received very specific instructions not to greet her in any of my social media accounts and in any of my blogs. She doesn’t really like warm hugs and swarming birthday greetings all over facebook. So I...

Except my version, I skipped the coconut nut, couldn’t find them in shops within walking distance, only cook with the milk. I used less chili than indicated, since I just had some dental work. Delicious!

OK, so it’s the second quarter already, but just sharing the Kelantanese crab curry I made last night.

Kelantan is a North-eastern Malaysian state, with its own distinct culture. The Kelantanese-Malays themselves descended from the Cham people who migrated southwards from Indochina. The Kelantanese-Chinese have been coming since the 16th-century.

I bought four live mud crabs for my curry. 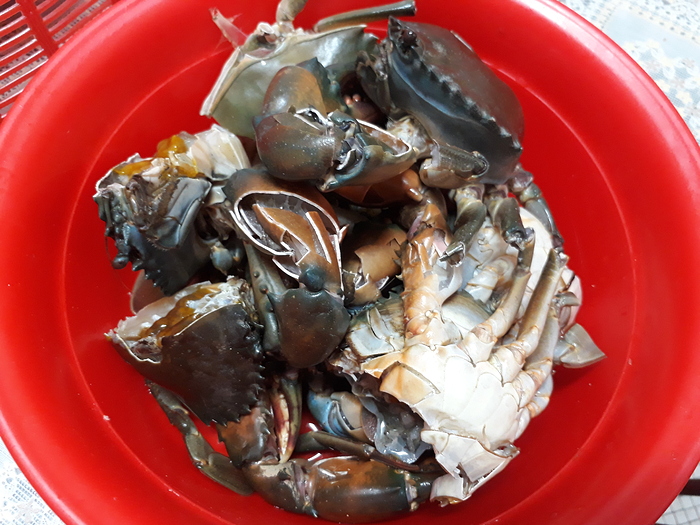 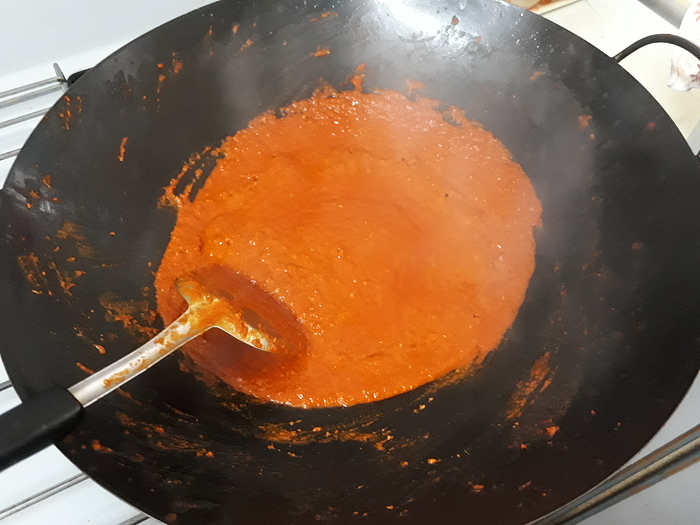 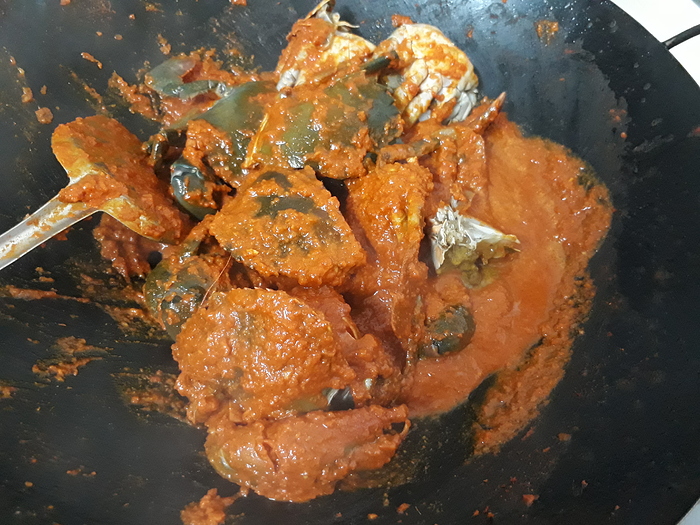 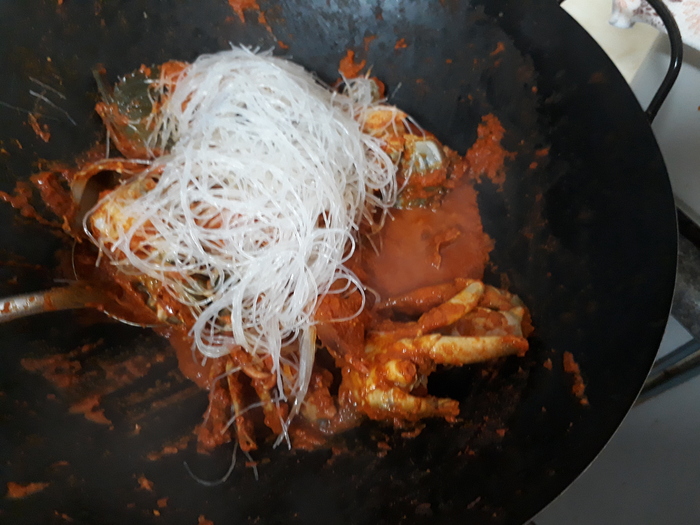 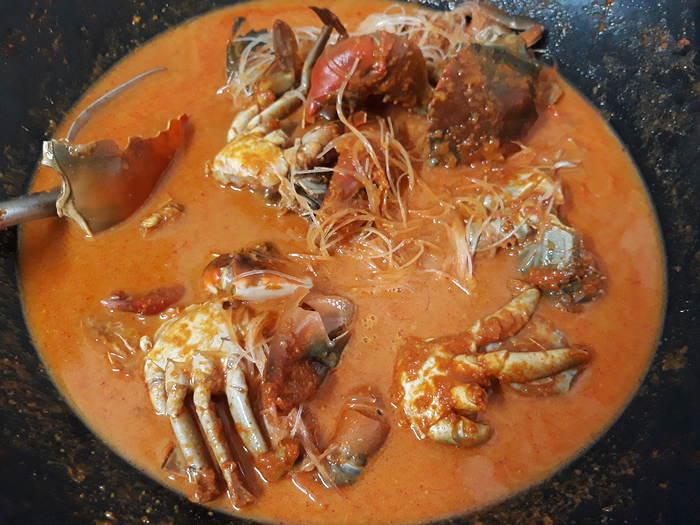 Taste and adjust the seasoning to your preference. 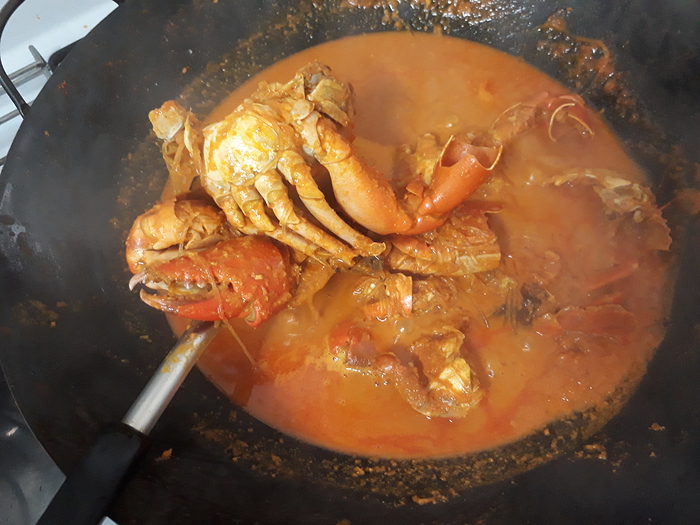 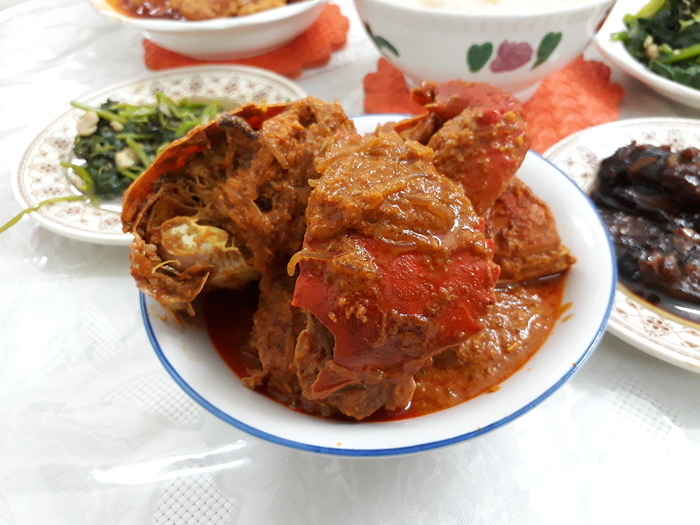 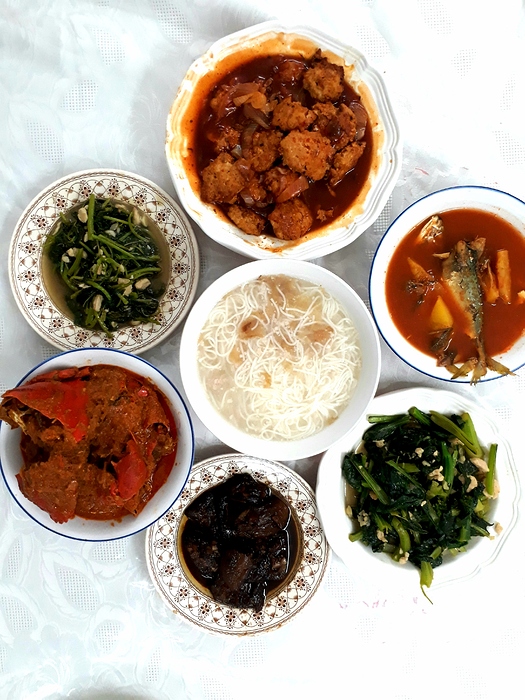 ← previous page next page →
“Food is a pretty good prism through which to view humanity.”
― Jonathan Gold
Market stall in Lima
Credit: TXMX 2