Tonight’s meal was all off the BBQ.

Everything was simple, yet delicious- we even had my three year old asking for more onions!

Last night we decided to take advantage of the late sunset and cooler temps with an evening hike/jog-slog which ended up at about 4 miles round trip. Dinner was a bit late, but we had some rice pilaf (out of a box), grilled Coho salmon for me (marinate with ginger, soy, lime, and crushed sichuan pepper) and chicken breast basted with bbq sauce for DH. Side was sauteed onions, celery, zucchini, and cabbage.

I had “sausage burger” (basically sausage meat in shape of a patty without the skin), reindeer hotdog and reindeer burger in Helsinki whilst waiting for the last catamaran back to Tallinn. It’s fast food abomination but it’s a typical Finnish thing I just had to try.

I’ve been working my way through the turkey breast leftovers these past couple of days. Cooking will be at a minimum the next couple of days, as my 13yo nephew is coming in from L.A. for a long week with East Coast family before school starts back up on the 15th. I expect there will be munchies on the whale watch I’m hoping to schedule on Thursday, and perhaps burger night at the local pub that evening. Then he’ll be off on Friday to Maine with my sister and BIL while I go back to work for the day. So maybe cooking on Friday or maybe I’ll go out with friends that evening, and leave the cooking to the weekend.

It’s cooled down just enough to allow the A/C to be turned off, open windows and doors, but that also allows the poor pup’s lonely occasional howling across the way to drift into the house as well.

I can’t tell if the owners are home, but it bothers me that he’s left alone for so long. OR that they ignore him when he needs attention, if they’re in the house.

I had a bag of corn from 6 ears of corn I had toasted, cut from the cob and froze a while back before leaving town. Made Mark Bittman’s corn chowder tonight for dinner. The stock was made from 1 qt of corn stock and 1 pint of chicken stock I pulled from the freezer. Tasted rather corny. It was good 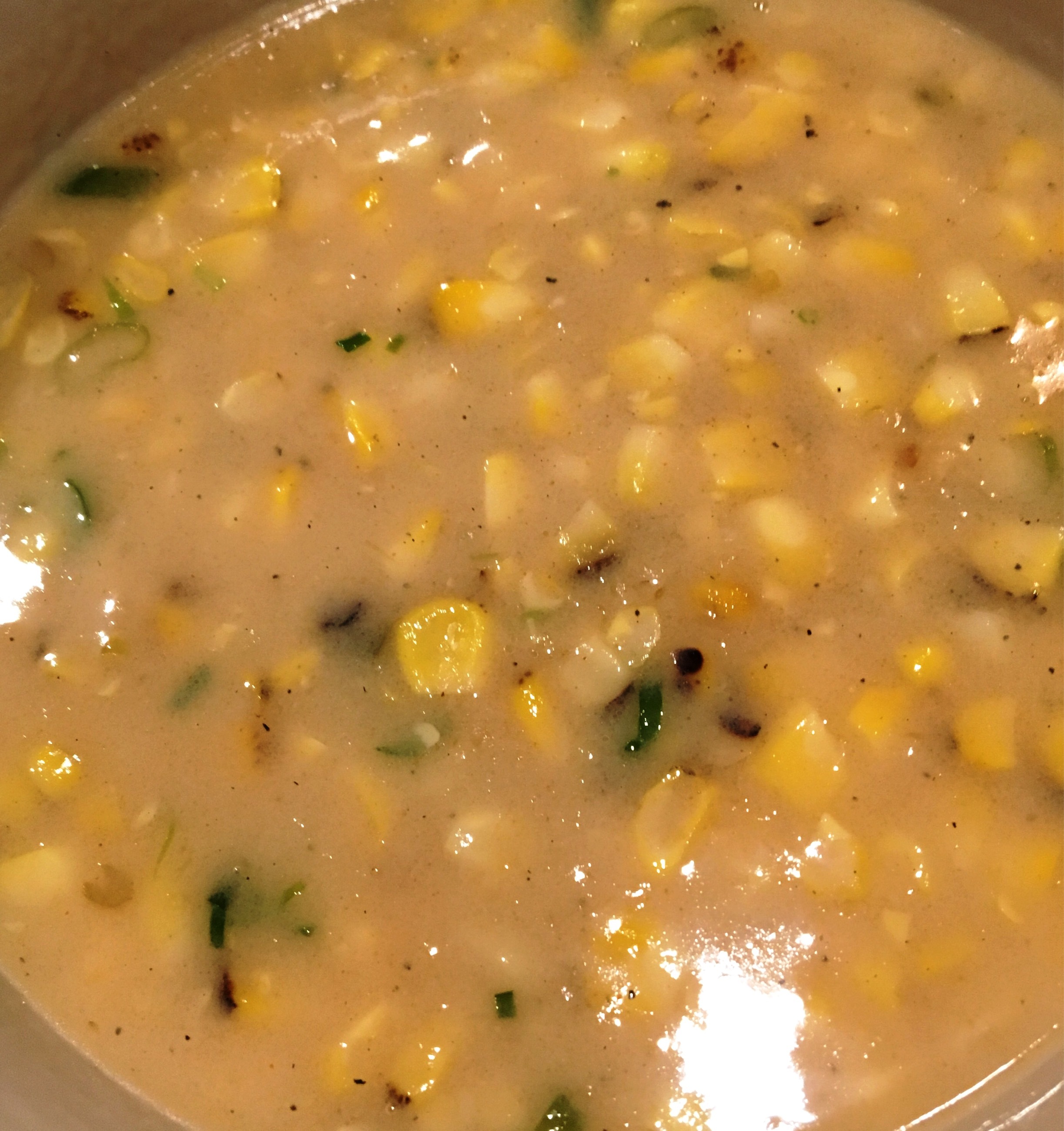 Coho salmon that I steaked out from Costco . Pan seared with a little mayo , caper , dill , and lemon dressing on the side . Leftover braised cauliflower in tomato puree . Potato salad . Nice and easy for Tuesday .

Tonight was a quick late dinner of cucumber salad with lots of fresh dill and a good bit of cashew cream that i put ontop of some chilled quinoa and baby arugala with edamame to make it more of a bowl meal.
Last night was a lackluster delivery desk dinner of blahh veggie noodle thing ((ugh))

Recipe for that awesome-looking curry, @Scubadoo97?

I think you know by now I don’t really use recipes per se. I look up technique and basic structure of a dish and then just wing it. For instance, I looked at the common ratio of curry paste to coconut milk from a few recipes

But here are the basics. Used prepared Panang curry paste. Cooked it in coconut oil. Then added the coconut cream, palm sugar, a few shakes of fish sauce and cooked it a bit. In went the chicken cubes followed by the harder vegetables then the softer ones. Vegetables included shallot, carrot, part of a long slender eggplant, baby book choy, sting beans and mini colored sweet peppers. Cooked until the veg had softened a bit. Added a bunch of Thai basil just before serving

I bought the eggplant and the bok choy for the dish. The string beans were used because I had them and they needed to get used and why not.

It turned out really good. It’s been a long time since I made a Thai curry dish. Not sure why because it’s so tasty. The folks that opened the little Asian/Middle Eastern market by me are Thai. I love the mix of this little store. I can pick up pita and feta and fish sauce all at the same place.

good enough for me, I cook the same way. Thank you! I don’t like things too coconutty so I’ll go 50:50 with chicken broth.

Last night was a surprisingly successful curried chicken lettuce wrap concoction. I thought I had a can of Thai curry paste in the pantry, but I didn’t, and my chicken and vegetables were half cooked before I realized it. So, I added a handful of fresh ginger and garlic, a generous dose of sambal oelek and a generous dose of a curry powder blend from Penzey’s, which I got as a freebie. They call it the “Now” Curry and I actually quite like the blend - the label says it contains: turmeric, coriander, cumin, garlic, black pepper, fenugreek,
cinnamon, fennel, nutmeg, white pepper, cayenne red pepper, cilantro,
cloves, cardamom and ginger. It’s definitely something I would buy again, although it’s a LOT more expensive than the blend I typically buy at Patel Brothers.

Anyway, chicken, red peppers, peanuts and all that other stuff cooked together and wrapped in romaine really hit the spot. DH is working late tonight so the leftovers are all mine for dinner!

I like to say the pantry is the soul of the kitchen. With a well stocked pantry you can go in any direction at a drop of the hat

Left work tonight at 7:45. Dinner eaten at 9:30 after food shopping and a quick vacuuming and dusting done for the arrival of my 13 yo nephew tomorrow, as we’re going on a 4 hour whale watch cruise. So it’s an early bedtime for me tonight, as I’m getting up early to meet up with my sister for the nephew switch.

Dinner tonite was a hand full of nuts and a couple of Manhattans after a 6 mile beach walk. It hit the spot

Ok you win the internet today…

Well with a bucket of rock crab claws brought to my house from the fisherman monger , and zucchini from his garden , and a loaf of ciabatta brought to doorstep form a local baker . You make steamed claws in aromatics , zucchini pancakes , with bread and melted butter with garlic .

Well with a bucket of rock crab claws

It turned out to be one of those meals for myself to come around every once in a while . Steamed the claws , then put into ice . Added salt like I’m making ice cream . No water . Massaged until chilled . 15 min , cracked the crab . Zucchini pancakes with a toasted edge , lifted slightly . Tastes like grandmas . Toasted ciabatta .Melted butter with a small amount of garlic and salt . Molto bono . So simple but .

You wear a bib and eat with your hands .

Can we get to know your fisherman monger friend?

Alternatively, I may be around Pescadero / Half Moon Bay on Sunday so if there are places to get those please share!

If you get here on Saturday . The farmers market at Cabrillo college sells his rock crab claws . I’m thinking they around 7 $ a # . They will also have them at the Live Oak FM on Sunday . Can’t get you any , it’s family . Sorry