What prepackaged mixes/sauces do you cook with?

I just got my holiday gift yesterday - a big box from Louisiana full of cajun food. Much as I love the boudin sausage and pistolettes, I used two bags of the Louisiana Fish Fry etouffee last night. I added two pounds of shrimp and wowee! I also got 6 bags of their bbq shrimp mix, which I love, but I was in the mood for the etouffee over some corn muffins I made.

There are some things I really love using certain mixes for and this is definately one of them. What mixes/jarred sauce dinners do you use? 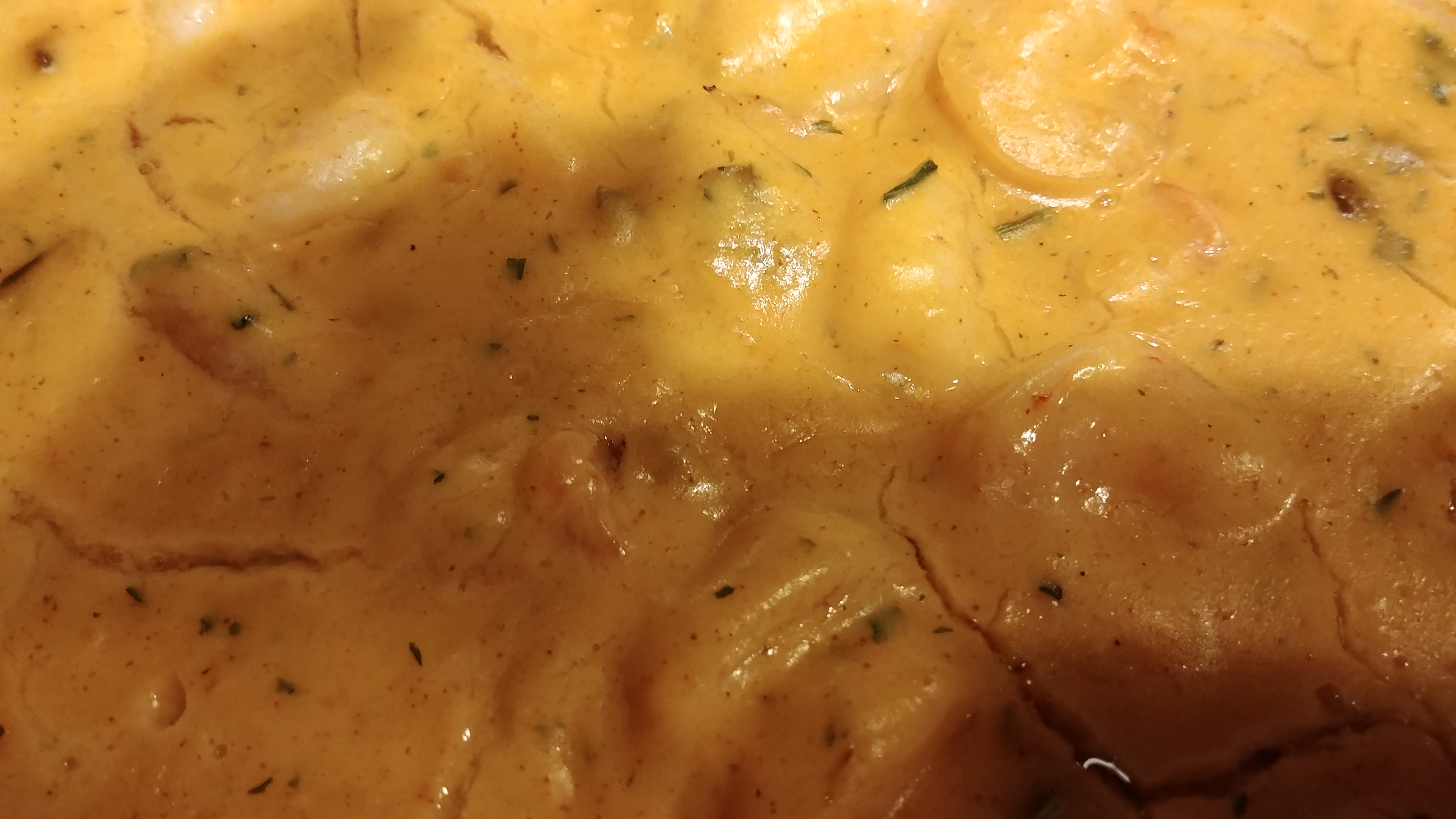 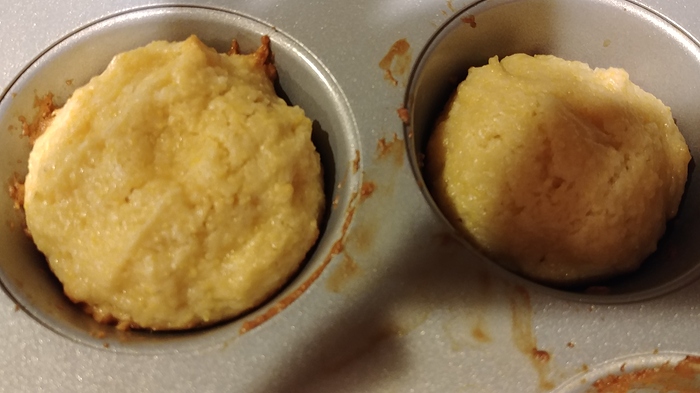 Just about the only product we use like that is a ready made tandoori spice paste. It gets mixed with yoghurt and becomes an overnight marinade for chicken. Only use it because that’s what the original recipe uses and I’ve never been sufficiently bothered to search out a recipe which includes making my own mix.

Are you including ready prepared dry spice mixes? In which case, that’ll be za’atar, garam masala and ras-el-hanout.

I keep frozen Asian vegetables and frozen chicken as a staple…then I always have ingredients on hand for a quick stirfry…start the rice and by the time it’s cooked the stir fry is done…so dinner is ready in 30 minutes and it didn’t come through a window in a bag.

I don’t use a lot of prepackaged mixes (maesri curry being an exception but a little tangential to the types the OP was referencing).

But once a year I crave some comfort food recipe that calls for the powdered ranch dressing mix and I don’t know of anything that suits as a sub for that. So put Hidden Valley Ranch on my list I guess.

How could I forget?

My all time favorite mix/prepared sauce is those little squares of melty goodness that turn my soup into Japanese brown curry. My favorite is S & B extra hot.

I don’t use many premade things, but I do use Hatch chile enchilada sauces, both red and green. Also Bob’s Red Mill gluten-free cornbread mix. I make it with almond milk, and it’s really good.

When I’m batching it, I sometimes use a boxed Bak Kuh Teh spice mix. For me, that’s a step up in my cooking regime, not a step down.

I was once tempted to buy a Mohinga spice mix, but realized I could go to a local hole-in-the-wall and get a delicious bowl of Mohinga for what they wanted for the spice mix.

I always use Boheme Sauce For Pasta: 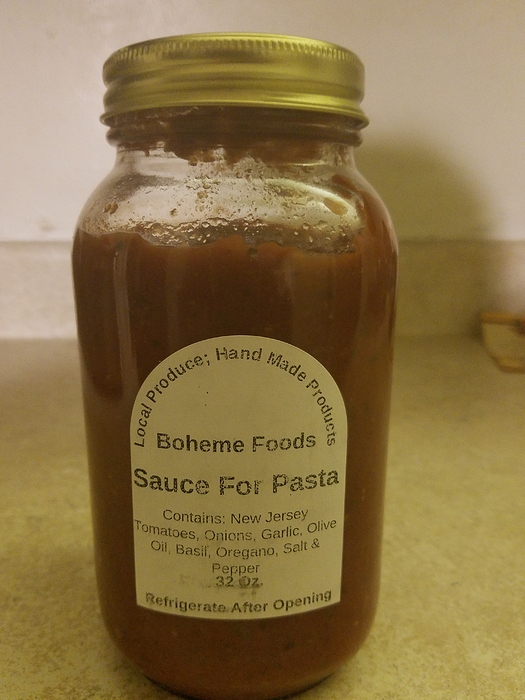 In fact I used some out of this jar for some very tasty fried calamari I made this evening.

It’s only available in NJ so you folks in the rest of the world are out of luck.

Japanese curry is where you absolutely have to use the mix rather than try to make your own. It’s not the same otherwise. Often use S&B Golden Curry mix to make chicken Katsu curry. A few homemade pickles and it’s lovely.

sometimes use a boxed Bak Kuh Teh spice mix.

I really got into Bak Kut Teh in Malaysia. I preferred the really herbal stuff. Any mix you recommend?

I use Knorr Demi Glaze, McCormick’s Brown and Poultry Gravy, Better Than Boullion Chicken & Beef Stock, Mae Ploy Curries, Bisquick, Walkerswood or Grace Jerk Seasoning, Pillsbury Frozen Biscuits . I use the gravy mixes as a thickener instead of plain flour or Wondra.

My local market carries only one or two brands. I don’t recall the brand name of the one I buy, but it comes in a box, not a foil packet. I don’t have any experience with the real stuff, so I can’t comment on the authenticity.

I bought some of this a while back because a lot of people on here were talking about it on some other thread. I haven’t gotten around to using it yet - need to break it out.

Yes please do break out that box of S & B curry. Another way to use it is to fold the paste into cooked ground beef mixed with carrot and onion, then use the resulting glob of messy goodness as a filling for anything from pie crust to filo dough to bread.

Big snowstorm yesterday here in NJ, so I made a tray of Cajun BBQ Shrimp and served it with fresh baked bread and rice. 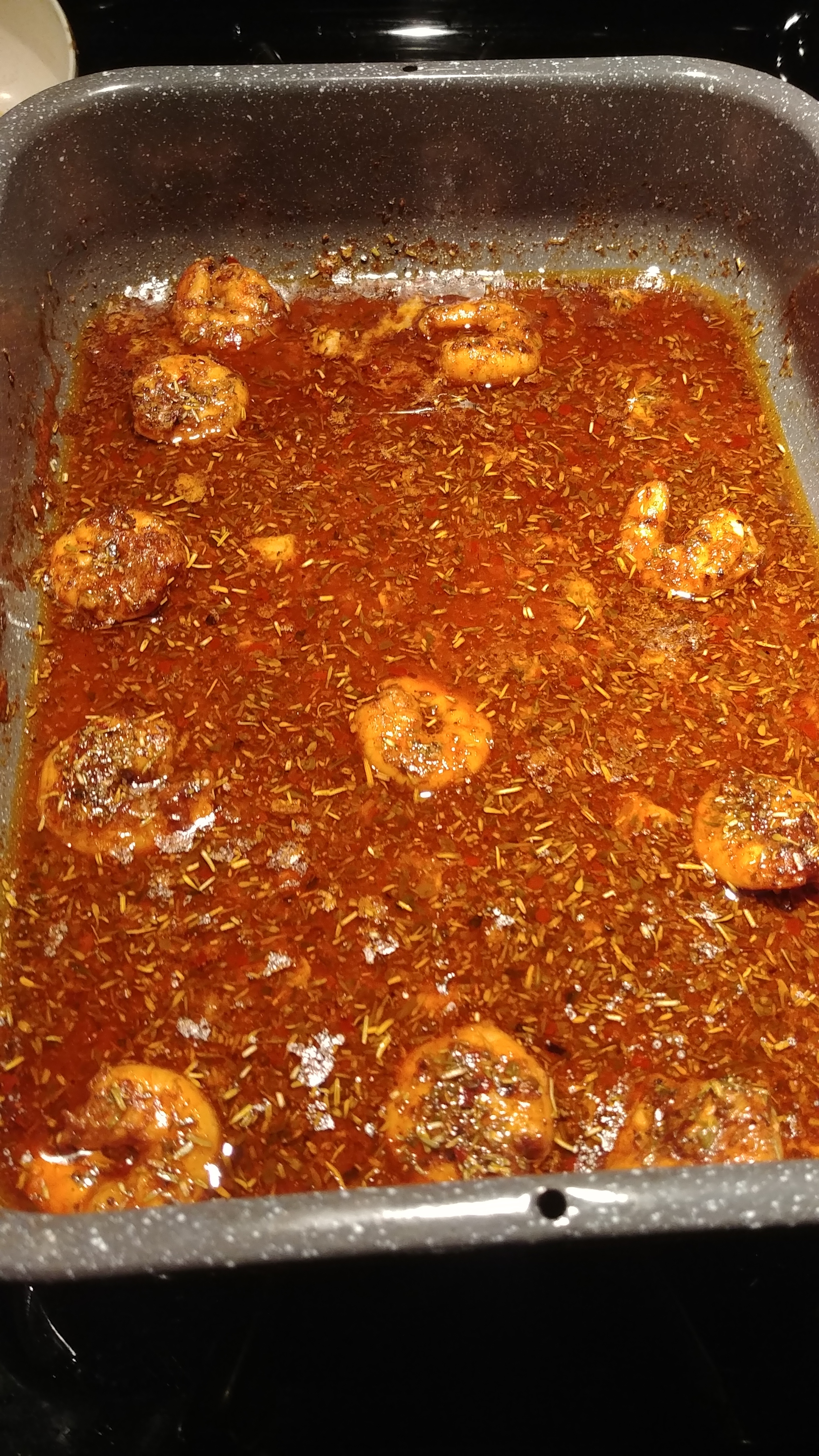 The bbq spice mix is from Louisiana Fish Fry. They make some good products.

Only prepackaged ones I still use are Thai pastes.

About Shan masalas, my family always used their own spices until Shan became widely available and affordable. At first, they adopted it for dishes that weren’t traditional for us. For example, we never made biryani at home. (It’s not a dish made in our region of Punjab.) So Shan was okay for that. But then slowly it became acceptable for more common items, like shami kababs. Some things, like nihari, people specifically want that restaurant flavor and only the mix gives it to them. It’s super obvious to me, even with everyone trying to mask it, by using half pre-made mix and half of their own mix. If there’s one thing I hope to accomplish with food, it’s to convince my family to get rid of these mixes. They won’t listen to me about real bread, properly cooked meat (everything is “well done”), farmer’s market produce, etc., but they are slowly accepting our old way with spices was much better. Yes, you can say I’m passionate about it. We still know plenty of Pakistanis and Indians that cook without them, but they are in my parents’ generation. Sadly, in my generation, I only know of one other.

If there’s one thing I hope to accomplish with food, it’s to convince my family to get rid of these mixes. They won’t listen to me about real bread, properly cooked meat (everything is “well done”), farmer’s market produce, etc., but they are slowly accepting our old way with spices was much better. Yes, you can say I’m passionate about it. We still know plenty of Pakistanis and Indians that cook without them, but they are in my parents’ generation. Sadly, in my generation, I only know of one other.

That’s interesting to read. I have friends who don’t cook Indian food from scratch at all (everything is from a mix/package, frozen ready-made, or takeout), but I also know a couple people who cook 100% from scratch (using individual spices and not premixed spices), but most people I know are a combination of the two, like what I do. I use spice mixes for the days I need a shortcut, but I also make from scratch versions too.

For example, I make punjabi style choley (aka chana masala) from scratch, but I also make a quick version using MDH chana masala mix. They are both good, but taste different, but the shortcut version
also saves me a few minutes. And the other day I picked up the frozen chana masala from Trader Joes, because we had a few samosas leftover, so we heated up the TJ’s chana, topped off the samosas with it, then added plain yogurt, tamarind chutney, chopped green chillies and chopped onions, and chaat masala, and had samosa chana chaat for dinner in less than 10 minutes.

Same with biryani – I have a couple different versions I make. My usual from scratch version takes about 4 hours. Sometimes, I want biryani, but I don’t want to spend 4 hours in the kitchen, nor do I want to wait 4 hours to eat it. So I might use a Shan or National biryani masala to make a biryani in 90 minutes (not the Patak’s paste – I don’t like it’s flavor on its own). I get to satisfy my biryani craving, and I didn’t spend hours making it on a day when I’m not in the mood to do so.

I think there’s a time and a place for premade spice blends and mixes, but you’re right that some people now rely only on those mixes and have lost/never learned the ability to make those items from scratch.

@seal Which company was your gift box from? I would love to order one of these for myself - er, I mean for my family - next holiday season!