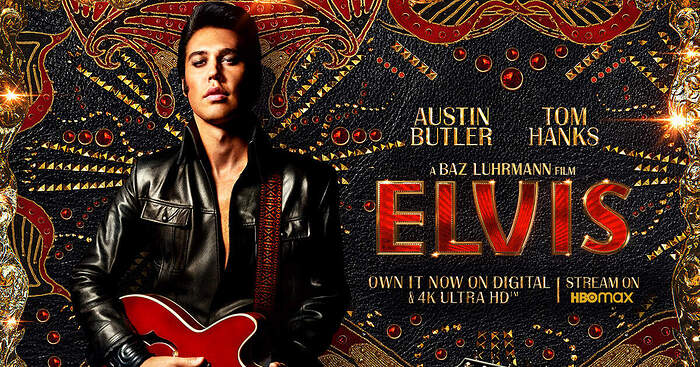 Well done. Remarkable script. Remarkable performances. Remarkable attention to musical factual detail – all the way to his onstage “Play it James” nod to TCB leader, the incomparable James Burton. That said, we can see how it won’t be everyone’s cuppa.

Too Gun Maverick was great. Nobody makes action movies like this anymore. Highway to the danger zone !

Yeah. like the old children’s song. Which, notably, does NOT make an appearance in this very odd super-indie arthouse horror that somehow caught just the right butterfly wing flap and got thrown into virality. So much that not only did horror streamer Shudder pick it up, but gave it an (abbreviated) couple of weeks in actual theaters before going to the interwebs.

The plot, such as it is, is about two children, Kaylee (older, 6 or so?) and Kevin (age 4) who seem to be stranded in a house where the doors disappear, adults are absent or non-responsive, and there’s something else in there with them…

But as bare as that is, that really is it. The film is REALLY about the sense of atmosphere and dread the filmmakers create, with a recipe of long, still, exceedingly grainy shots of corners, halls, and partial doorways, broken only VERY occasionally by a foot, or a knee, or a shoulder and some hair creeping into frame as evidence that there are, actually, people around. The soundtrack is a tense, upsetting combination of white noise of various levels and the soundtracks to old 1920’s and 30’s cartoons playing on the television almost non-stop. It all feels very much like that disconnected nightmare logic we’re all probably too familiar with.

For horror/thriller lovers, there are some moments in the film that are absolutely masterful. A sequence in which the father (unseen) urges the small boy to check under the bed will have you white-knuckling for 3 minutes solid. There are a good half dozen of these exquisite little vingettes throughout the film.

But they’re surrounded by so much emptiness. At times, the film grain itself, being the ONLY variation on screen, began to take on patterns which I’m quite sure my mind was just filling in to have something to occupy it.

On the one hand, I wouldn’t recommend this to any but lovers of very SPECIFIC sorts of films, who are interested to see what can be done with rudimentary equipment, almost no budget, and a commitment to a concept. For those people, this is quite interesting, and should be seen in the theater.

For the rest of world… I’m worried that, as dark and low-contrast as the film is, that streaming compression (esp. Shudder, who have never managed to move past 720p) will obliterate what little there is to ACTUALLY see in frame. Combined with the (deliberately) slow pace and (deliberately) muffled sound, I anticipate a large portion of the viewing audience will feel frustrated and lost.

Unless you’re really into Tarkovsky-slow and not-very-accessible art-house hauntings, you can probably skip this. BUT, if you ARE like me and find the stuff going on at the edges of modern filmmaking interesting in their own right, this is worth a watch.