What Are Your 3 Favorite Desserts?

Just wondering what everyone’s favorite desserts are? If you can’t pare your favorites to 3, please feel free to list a couple alternates or 3. Also do you make them at home or just have them for special occasions from a restaurant or bakery?

My alternates would be:

I make all of these at home with the exception of Tiramisu; have made it in the past but intend to make it again soon.

I toyed with the idea of swapping one of those for tiramisu but didnt because my long love affair with it is often disappointing and , indeed, my love is often unrequited. I’ve only ever eaten it in restaurants, though. For something so recently created (early 1970s I believe), it has become ubiquitous. I know how it should taste but, so often, there isnt the necessary kick from strong coffee and booze, leaving you with just sweet gloop. I’d like to give you my “Top 5” restaurants for tiramisu but, unfortunately, there’s only two I could really recommend - San Carlo Fiorentina, Greater Manchester, UK and Trattoria Delia, Burlington, Vermont, USA. None of the others, including those eaten in Northern Italy, match these. 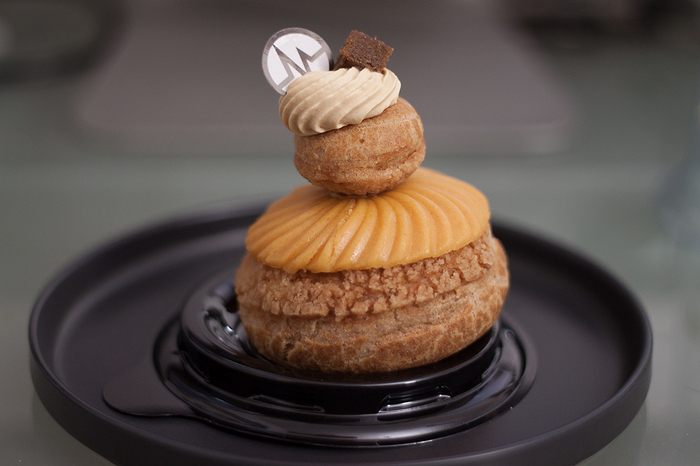 There are many more. You can be spoiled living in Paris.
I also have a soft spot for egg tarts, Pasteis de Nata or Chinese egg tarts or any custard tarts.

I’ve tried making coffee desserts, but they are not so easy. When strong expresso is integrated into the dessert and stored in the cold, the flavours turned mild even when during the making, the taste was right. Pierre Hermé uses Brazil Red Iapar coffee grains.

You can see my pastries review here.

One of Mrs H’s favourites. But I don’t think it would make my Top Twenty list, let alone Top Three.

I love the idea of an almond shortbread! What’s your recipe?

Actually, there are many individual creations that are very good, but it is a one off thing, not a classic.

Maybe I like rum and chantilly…also do you know this dessert was invented for the oldies that have teeth problem?

his dessert was invented for the oldies that have teeth problem?

For those that I make on a semi-regular basis:

My Key Lime Pie
Lemon Posset (SO easy and you can jazz it up with blackberries, raspberries, etc.)
My Apple Pie

True that about most tiramisu; our favorite Italian place has one that is truly fabulous & the best I’ve ever tasted. Think I need to go there very soon & have a piece to try to duplicate it

Chocolate eclairs
Cherry pie
Chocolate layer cake
All made by me:)

I don’t have a recipe but I’ll be happy to tell you what I do. For the crumbs I often use shortbread cookies of any type, Nilla wafers, Pecan Sandies and chocolate wafers. You’ll want about 1 1/2 cups of crumbs. So I crush those in the food processor, taking care to not grind them into a powder, you want crumbs. Empty them out of FP & put them aside. Then toast up about 1/3 - 1/2 cup of almonds, they can be sliced or whole. When they are golden, put them into FP & process til they are fairly small. You don’t want them ground finely; combine them with the crumbs. Melt 4 T of butter & add to crumb mixture. Lightly press into pie plate and bake for about 10 minutes at 350 degrees.

When I use The Famous Chocolate Wafers it takes about 3/4 of the package. For graham crackers it’s most of a sleeve. The rest I just eyeball. If I use Pecan Sandies I’ll use pecans, with graham crackers I’ll sometimes toast up coconut and macadamia nuts for some pies. Anyway you can mix it up anyway you like.

Any of the crumbs can be crushed in a ziplock bag with a rolling pin. I used an empty wine bottle at a beach vacation house once - works well!

Hope this helps & let me know if you have any questions.

Please tell me what Princess cake is, I’ve never heard of it. TIA 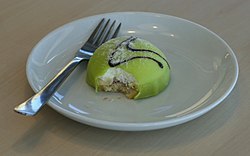 A princess cake (Swedish: prinsesstårta) is a traditional Swedish layer cake or torte consisting of alternating layers of airy sponge cake, jam (typically raspberry jam), pastry cream, and a thick-domed layer of whipped cream. This is topped by marzipan, giving the cake a smooth rounded top. The marzipan overlay is usually green, sprinkled with powdered sugar, and often decorated with a pink marzipan rose. The original recipe first appeared in the 1948 Prinsessornas kokbok cookbook, which was pu...

I was introduced to it years ago by a friend. Unbelievably good, but I will never try to make one myself!

There;s an inn near me that serves a chocolate heaven cake: dark chocolate cake, thin layers of white and milk chocolate mousse, covered in a dark chocolate ganache and served with raspberry coulis. A little goes a long way.

The same inn has an occasional special dessert called the s’more (usually only served on summer holiday weekends). It’s a pyramid of graham crust filled with marshmallow and chocolate.

The Inn at Williamsburg has (or at least did a few years back) a chocolate governors cake. It’s only on the menu in the dining room, but if you’re only having snacks in the bar and ask nicely, they’ll serve it there as well

Yes, it is indeed chocolate.

Home alternatives:
A square of dark chocolate with sea salt and, sometimes, caramel.
A piece or two of chocolates from a local chocolate maker.
There’s a local farm that makes its own ice cream. Believe it or not, I prefer their coffee flavor. Sometimes they have a batch of almond joy flavor (a mix of chocolate and coconut).

Agree with @Harters about finding a really good tiramisu. I spent most of my life in Philadelphia, which has more than its fair share of Italian dining. Oddly enough, the best tiramisu I’ve ever had was in a restaurant (Emilio’s) in Staunton, VA. We used to go to Asheville, NC every year or so and always stopped in Staunton for a night on the way down and back to break up the ride. It got to the point we just ate at Emilio’s every time.

Oh my! I need this cake!