Three times now in about two months I have experienced “bizarre” chicken breasts. I usually buy thin sliced Shop Rite’s own and have no problem. Two months ago, they were out and I bought Purdue. While it looked normal and had no odor (was definitely not expired), the consistency was a weird rubbery one. Two weeks ago, same problem but with Tyson. Now tonight, it happened with Shop Rite’s.

I had them on the grill pan forever and they refused to develop grill marks. Instead of browning, they stayed white and released so much moisture that they never grilled. Even after cooked completely, the chewiness was gross and the feel was like rubber.

I read somewhere online that people have been experiencing similar. One explanation was the demand for chicken being so great that they are rushing the chickens and that is affecting the meat. Regardless, has anyone experienced the same?

We do a ton of chicken in my house, and while this is a rare occurrence, I can’t help but be concerned over what manufacturers may be doing.

Could have been woody breast syndrome. 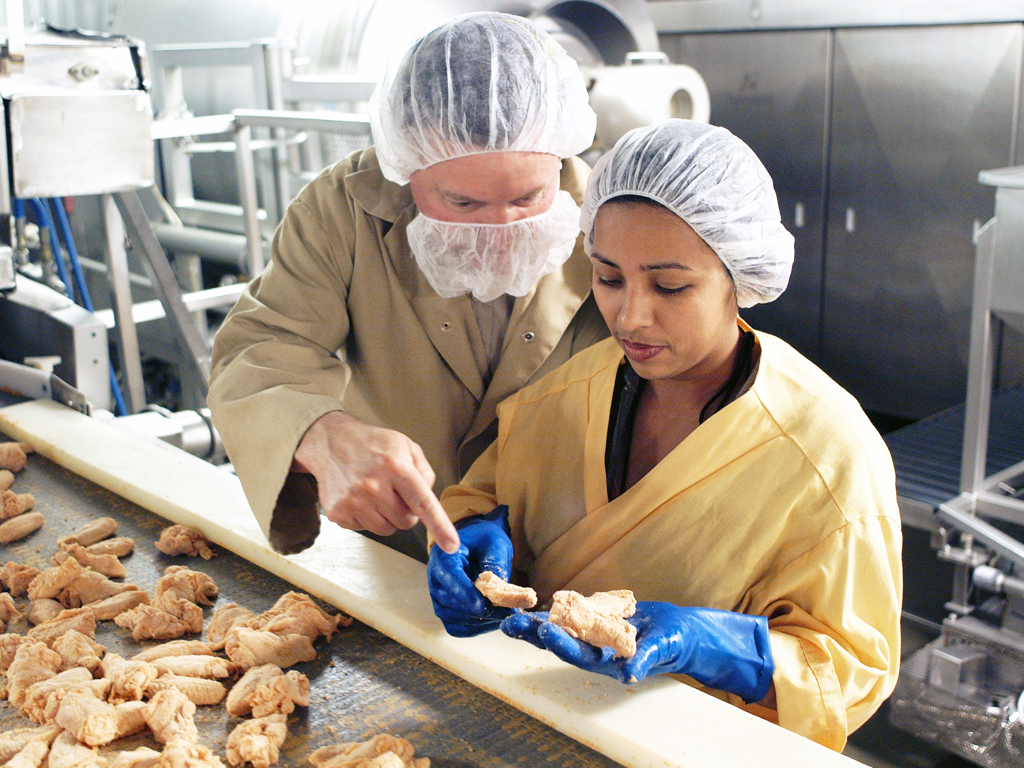 What is woody breast?

Woody breast is a muscle abnormality in a small percentage of chicken meat in the U.S. It causes chicken breasts to be hard, pale with poor quality texture.

This happened to me when I moved . At the local grocer chain I bought foster farms and other packaged chicken . I cooked several meals . And thought to myself. This is terrible what am I doing wrong . It wasn’t me it was the chicken . Found some nice birds at a small local grocer . Game changer .

I’ve experienced the same, and have been totally skeeved out by it. I’ve heard it’s due to “white striping disease”. The breast actually has white stripes running across the outside, and has a horribly rubber texture when cooked. They are usually hidden in the packages, with the normal breasts paced over them. When I encounter one, I freeze and save for the next batch of stock. As a consumer, this is totally unacceptable to me, and yes, IME, it transcends all brands, and can even be found with the organic chicken, as well.

White striping and woody breast myopathies in the modern poultry industry: a...

Abstract. Myopathies are gaining the attention of poultry meat producers globally. White Striping (WS) is a condition characterized by the occurrence of white

Check your packages for some variation of:

“Product may be enhanced with up 15% (by volume) of flavored brining solutions”.

Maybe you can find free-range organic chicken? That’s the only kind I buy, and I have never experienced anything like what you describe.

The last sentence of that article

‘Other work includes developing remediation strategies for use of woody breast meat in processed products.”

Scary! Give us back the real meat!!

But I believe this only happens in breast meat, so legs, thighs, and wings should all still be reliably textured. I prefer thighs anyway, have had a couple of weird chix breasts so that just reinforces my preference. Is turkey breast immune from these issues?

Little bits of odd texture wouldn’t be noticed in sausage or as Lambchop mentioned, the meat can be used for stocks. Throw it in the sausage pile with all the other ugly bits.

Thank you all for the responses.

Our cat loves raw chicken breast, we buy him cheaper meat, sometimes if he couldn’t eat everything, we would cook some of his meat, I noticed these stripes after cooking, the rubbery feel and bland taste. For ourselves, we usually buy meat with label rouge, means that chickens grow slowly and up to 81 days vs ordinary chicken usually killed after 35-40 days. I don’t see the stripes and the meat tastes much better.

I don’t know if price is a reliable indicator. 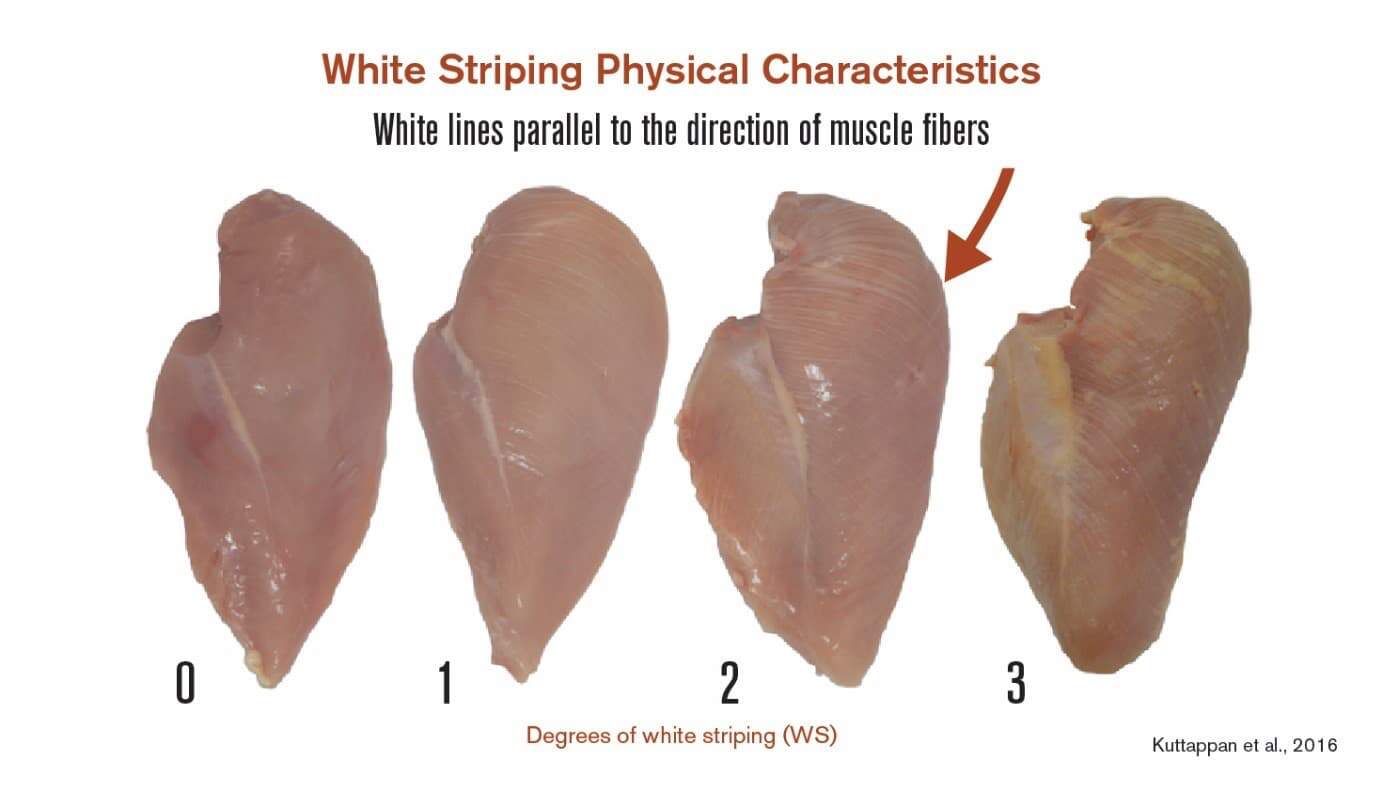 And touch it as well. 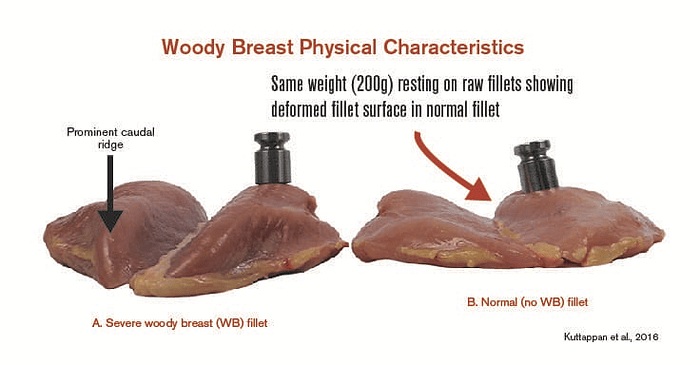 Is turkey breast immune from these issues?

Interesting! I had no idea, but I don’t eat a lot of chicken breast meat. I usually use quartered breasts for soup or stock. Every once in a while I will use it for a stir fry, or sliced in a way that doesn’t make this as noticeable. I’ll have to keep an eye for this.

Interesting thread. I almost never buy chicken breast, but still it’s good to know what to look out for with White Striping and Woody Breast. Who knew?

As best I can tell, it’s not a dietary or hygiene matter but a textural one. Still kind of creepy.

Creepy indeed, and the poultry producers, despite being aware of the problem are unloading it onto consumers. They will usually slip at least one affected breast into a package, covering the striped breast with other unaffected breasts, or by having opaque packaging.

I suppose a good way to avoid it, is to buy chicken breasts from the butcher case, so you can see exactly what you’re buying.

I’ve been having a hard time even wanting to eat chicken breast lately, but enjoy wings and thighs, which are not subject to the problem.

Personally I like thighs much more, breasts are a bit dry.

Thighs have white stripe as well. All the meat does. I see it on skinless, boneless thighs all the time.

I see it on skinless, boneless thighs all the time.

True, here the thighs are sold with skin. Does it taste as wierd as the striped breast?