Menorca: Mahón, name of the cheese most common is a soft tender buttery young cow milk cheese with a reddish Golden rind.

Mallorca: There are several goat and sheep cheeses in the mountainuous regions from Ricotta to aged varieties.

Ibizia: Not known for cheeses, however, they locally produce. Goat or Sheep milk Ricotta. 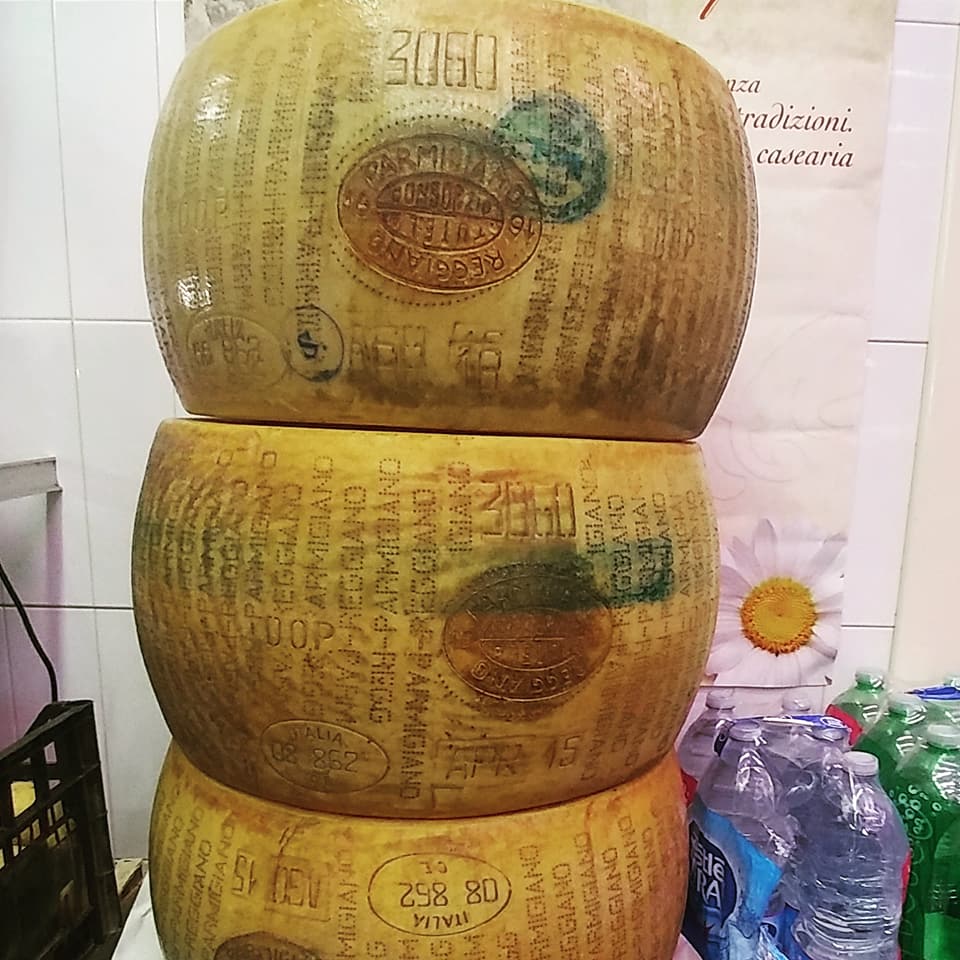 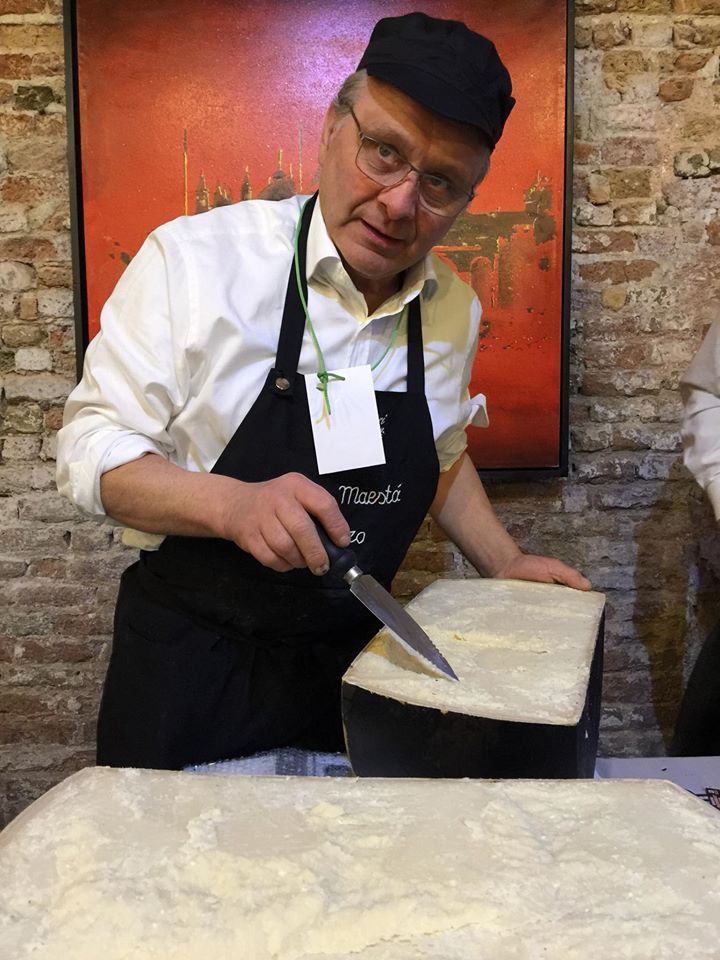 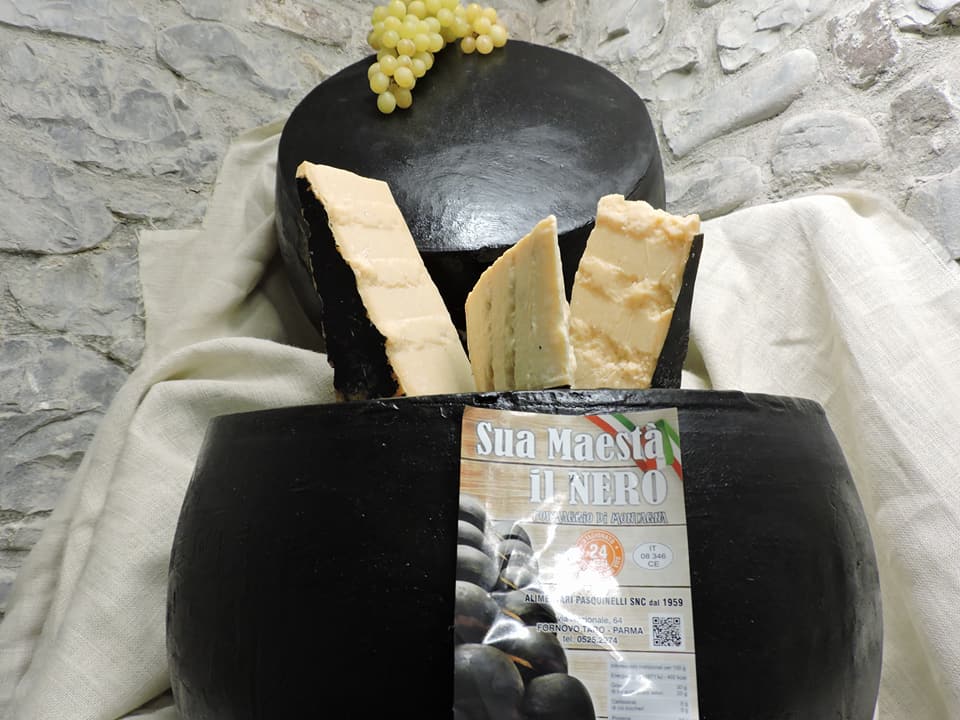 My preferences are aged cheeses such as Reggiano Parmigiano, Pecorino Sardo (Sardinia), Manchego and Aged Cabrales wrapped in leaves and aged in caves in Asturias.

There are also amazing aged goat cheeses in Cádiz and Granada. Their rinds are rolled in Rosemary needles.

When it comes to fresh cheeses, I prefer Mozzarella di bufala and Buratta from Puglia. Caprese salads once in awhile …

Aged Reggiano Parmigiano is so good, beyond 3 years are not so easy to find, except in special shops or food fairs.

Do you have any recommendations of online Italian or Spanish cheese shops? It will be great if they can ship in Europe.

However, the borders between France and Spain are closed as well as Spain and Portugal. I am uncertain if they are able to do foreign shipping … I really do not know. You can check on their websites or via email.

Have a nice day.

Thanks. It’s not for now, but later when frontier opens again.

Have a lovely evening …

I’ve had a version of turophobia pretty much my entire life. I must have had too many bad experiences with cheese early in life. I would eat and enjoy several of the, I guess i would call them basic or common cheeses, but never went much beyond things like mozzarella, provolone, Parm Reg, supermarket cheddar, monterey jack, etc.

That changed at the beginning of last year. I tried probably close to a hundred cheeses that were new to me in 2019. Didn’t like them all, but I liked most of them.

If someone had told me in 2018 that one of my favorite cheeses would be a goat cheese, i would have said they were crazy, but Midnight Moon was maybe even my very favorite of 2019. I liked all the aged goudas I tried, even really liked Ewephoria which is an aged sheep’s milk gouda and liked Lamb Chopper, another sheep’s milk gouda. Smoked gouda is now my go to sandwich cheese.

Ended up loving lots of cheddars, too. High Plains, Cabot Clothbound, Beecher’s Flagship, Beehive SeaHive, Collier’s, and Kerrygold Skellig(but surprisingly not as fond of Dubliner) were some of my favorites, but I don’t think I ran into a cheddar I didn’t like.

Of the Alpines I liked Challerhocker best. Still not my favorite category of cheeses but I liked the smoked gruyeres I tried, too.

I expanded the grating cheeses I use on pasta beyond Parm. Plenty of those I liked, too. Piave vecchio, Aged Asiago, pecorino Calabrese(which i like better than pecorino Romano), and Sartori SarVecchio(American parm that I liked almost as much as the real thing Parm Reg which is my favorite cheese if i had to pick one) were some of my favorites for that. Found out i don’t care for truffled pecorino.

Not a big fan of the blues, but I discovered I do like them on a burger. Tried 8 and liked Stilton the least but I probably need to give that one a second chance.

A couple of misses that i had high hopes for were Humboldt Fog and Brie(double cream was what I had.) Didn’t hate them, but they didn’t do anything for me either.

Parrano Robusto was another favorite which i suppose is no surprise since it’s sort of a cross between Parm and gouda.

I bought Liz Thorpe’s Book of Cheese early last year, and it was a big help. I went from knowing next to nothing about cheeses to knowing a respectable amount. 2019 may have been my best food year ever. It’s either that or the year I discovered Indian food.

Hah! I have tried many many blues but still think Stilton is best of the bunch. Sometimes I mix it with beetroot to fill dumplings. Most cheeses have health benefits but especially blues, which are lower in fat and more nutrient-dense.

Have heard only good things about Humboldt Fog but here I have access to similar rich, double cream French versions.

I’m glad you made an effort to try different cheeses and learn more about them.

Do you combine goat’s milk and cow’s milk for your homemade ricotta or make them separately? I get a poor yield for goat’s milk ricotta. I’m not sure why. I mean the fresh version of ricotta, not the “real” ricotta made from leftover whey.

Hi, good to see you around here (again).

Yes, that’s how I make “ricotta”. Yes, I have experimented with mixing different kinds of milk, and sometimes also adding single cream. The amounts of milk vary but usually between 1.5 litres to 2 litres, which yield a standard small ricotta basket.

I suggest you try again, checking every half hour or so to see how much curd is formed. If not much then try adding a bit more acidity (I just use a mild vinegar) and check again half an hour later. 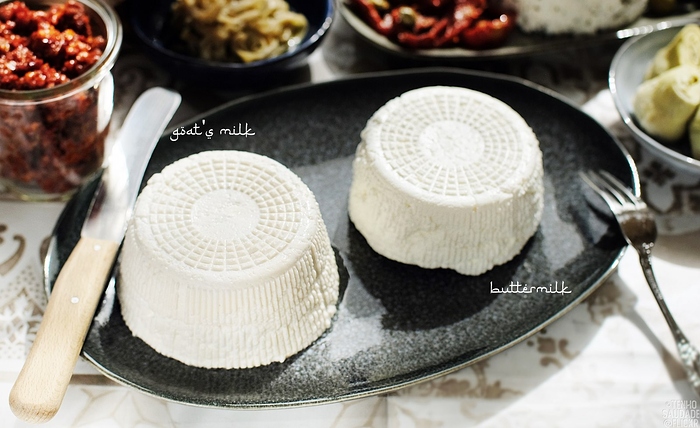 I agree goat’s milk tends to have poorer yield and I even use full fat type. I have been using only Jersey cow’s milk lately and the yield is better. This milk is very high in fat and flavour.

I have 2 sets of ricotta baskets, 1 set is a little bigger. Cheese in photo below (Jersey cow’s milk) is in a bigger one and it’s full to the rim. 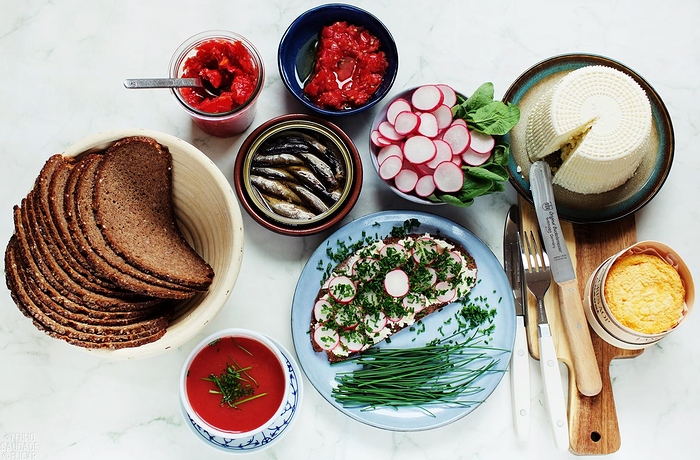 I thought about @bmorecupcake’s question and decided to do a little experiment.

Non standard milk always cost nearly twice as much for less. For example, cow’s milk costs 80 cents per litre. Goat’s and Jersey cost 1.60 euros for 75cl. The latter comes in 50cl and 75cl cartons only. 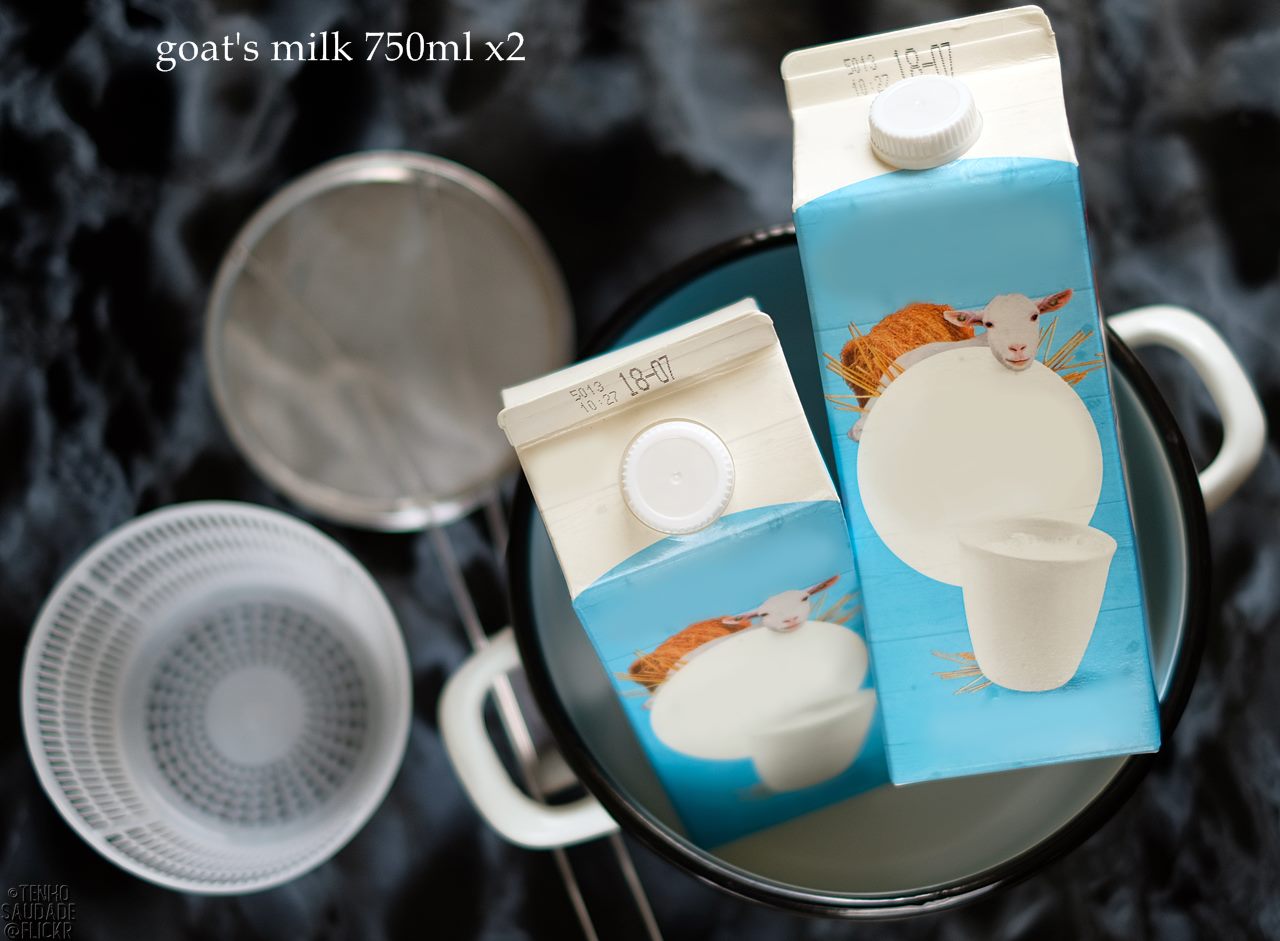 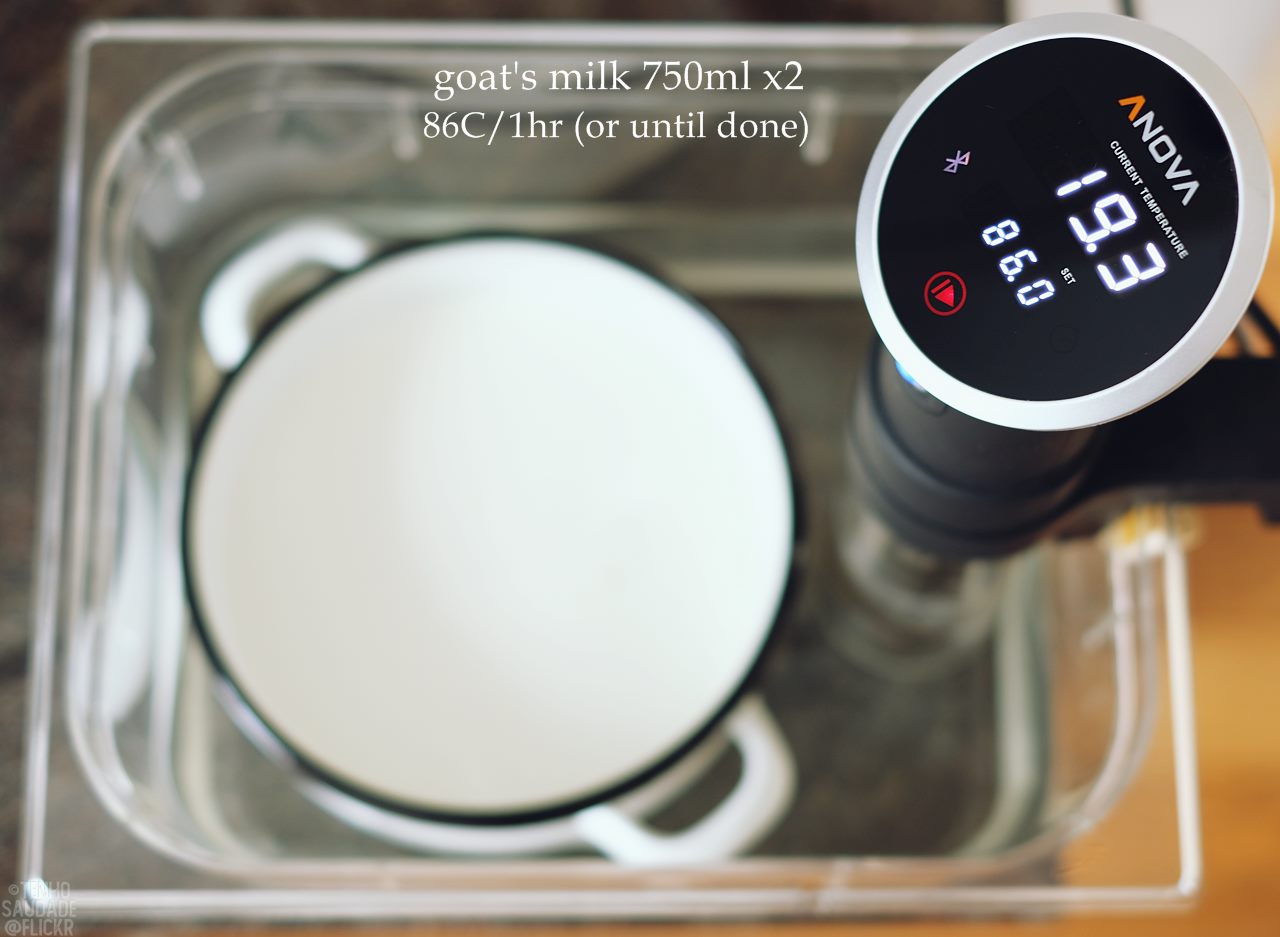 Both were drained overnight in the fridge. Here it is completely drained and ready to eat. Initially, the cheese filled the basket all the way to the rim. 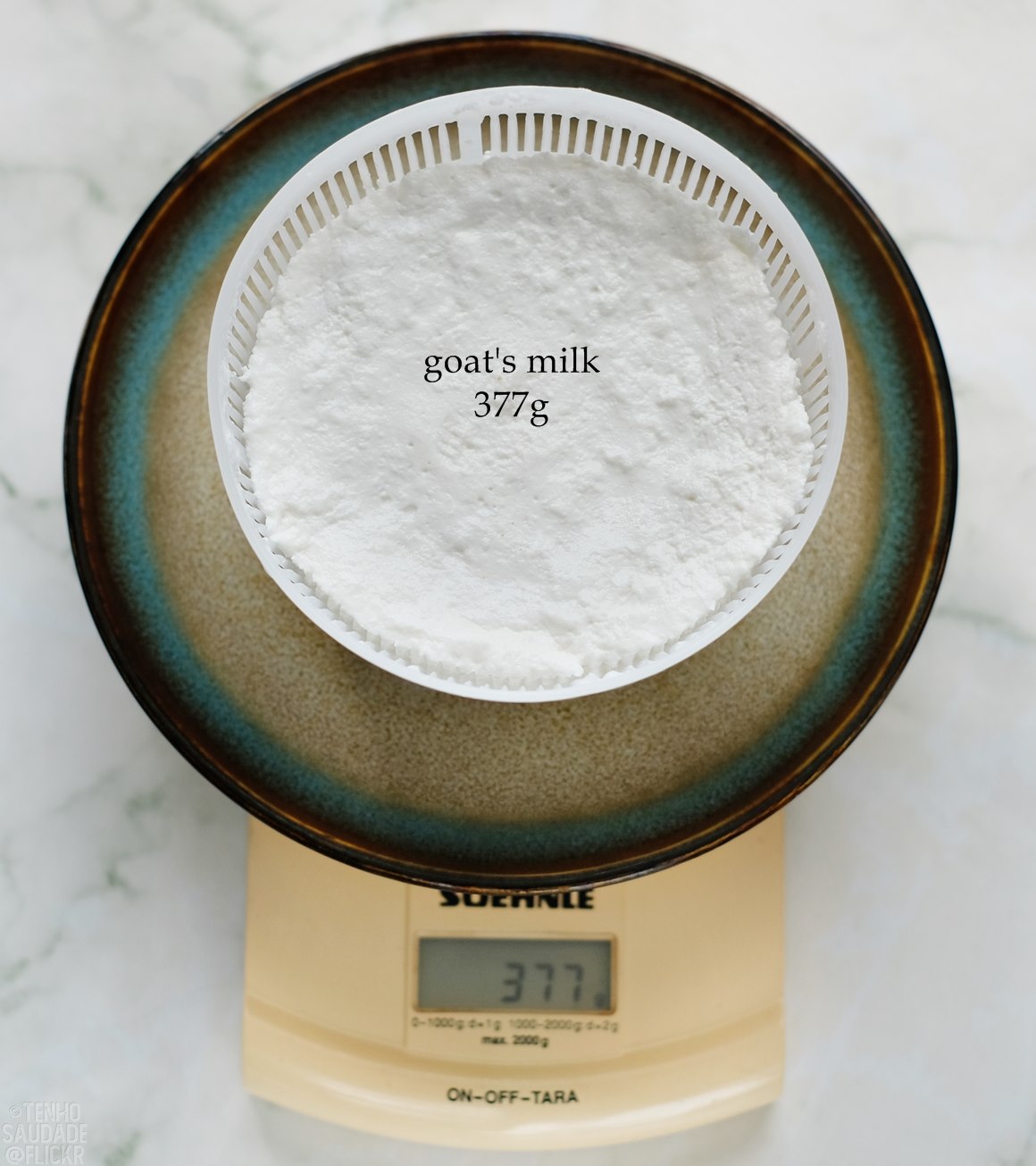 Jersey cow’s milk has very high fat content. The colour of the milk, the ricotta and the whey is yellow like butter. 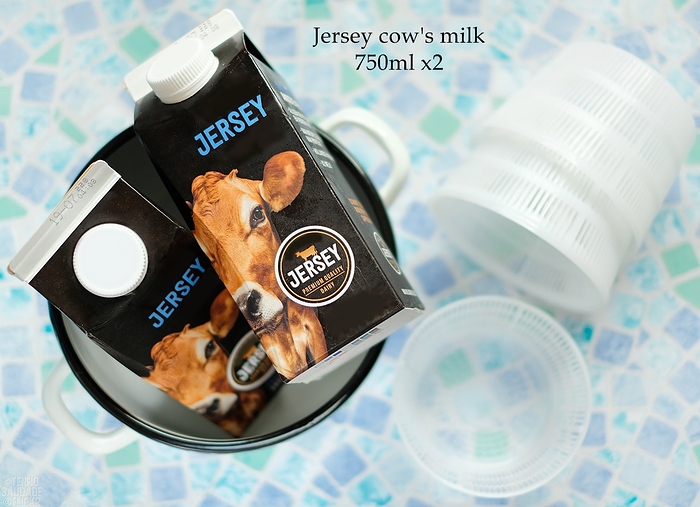 The yield of Jersey cow’s milk. Almost twice as much as goat’s milk. 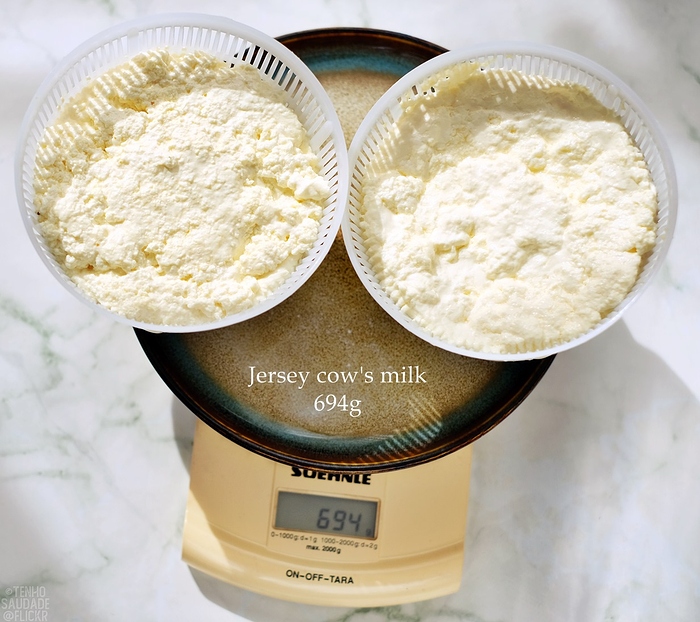 Just ate both ricotta together for lunch today. No ricotta money can buy in this country can taste this good. I encourage you all to make your own and you’ll never want to buy supermarket ricotta again.

I was wondering about this. It seems like it depends on the milk you can get; is that right? It MIGHT not be worth it if you can only get “standard” cow or goat milk? There are local Sonoma dairies that sell ricotta, and I’d be making it from the same milk they use.

The better the milk, the nicer the cheese. Even if it’s just regular milk I would still make it for myself. Simply because I enjoy the process and the edible reward.

Why not eat your own and supermarket’s version side by side at the same time, this way you’ll find out which you prefer.

I am going to use organic full fat raw (goat’s) milk next time.

Okay. I wasn’t thinking what might be typical “supermarket ricotta”. The local dairies, mostly in Sonoma, also make the local cheese, including ricotta. Examples are Cowgirl Creamery and Bellweather farms.

Anyway, I did order some Jersey milk from my CSA with plans to try it.

I only hear good things about Cowgirl Creamery. Support them if you can, especially in these times.

I had the Texel sheep’s milk cheese already a couple of times, a week previously then decided to buy half the wheel. It’s not a common cheese unless you live in Texel (an island in the Wadden Sea. Their most famous product there is lamb). 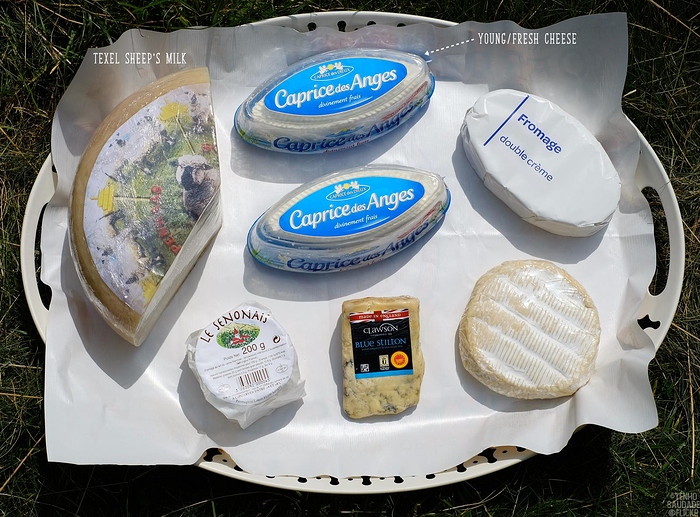 Presunto, do experiment with drain time on your ricotta. For ethereally creamy, I usually let it drain no longer than 5 minutes. Wonderful pasta dressing with a veg puree.

Bellwether ricotta is the bomb!

Thanks. I do eat warm ricotta. Always make 2 at the same time. Eat 1 basket still warm shortly after and the second is for the next couple of days.

New Italian cheese to me. Could find the producer but nothing on this particular cheese. I was hoping it would be at least stinky but it’s not at all. A bit disappointed. Only confirms the French make some of the world’s best stinky cheeses. Btw, it’s cow’s milk and mild. 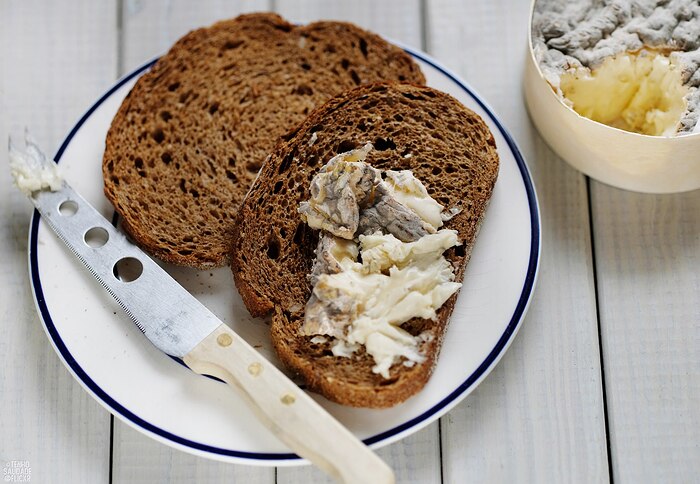 Am I gonna die after consuming all the mould? Let’s find out. 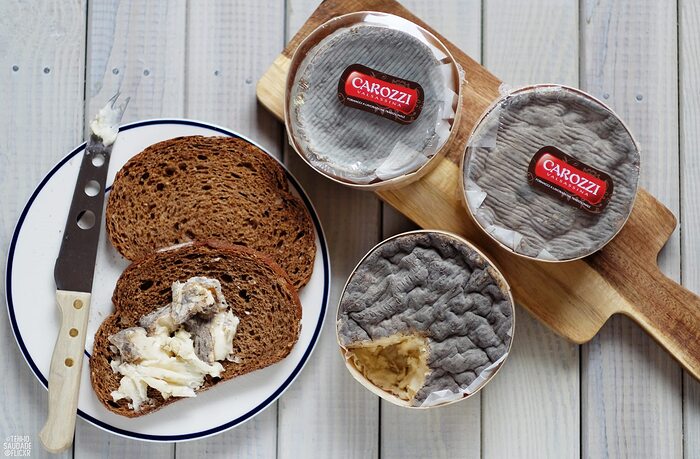