Does anyone know anything about this? A neighbor was having a bento box dinner the other night and she slipped me this menu over the fence. It appears all pre-ordering is sold out and then they’re on a business trip to Japan for January. This has somehow flown under my radar, and I don’t know said neighbor well enough to know whether to trust her tastes. Anyone have one of their take out boxes? 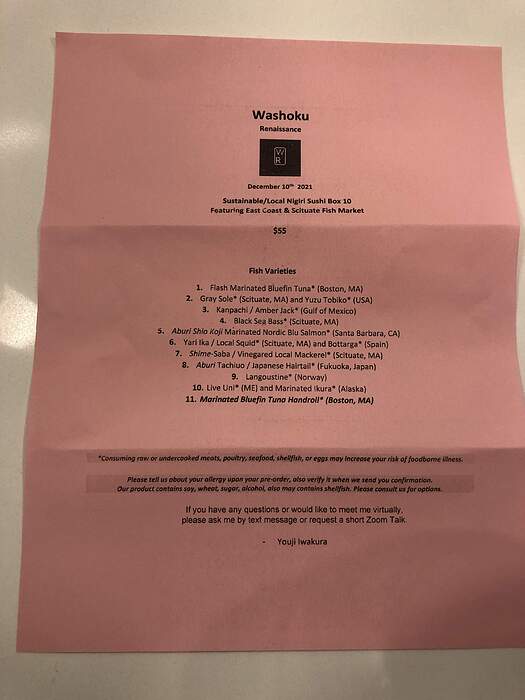 I know nothing about this and I am intrigued.

sigh nothing this intriguing ever happens near me…

huh, i also have never heard of this. interesting.

I just searched this website again, and it looks like they’re back at it with takeout boxes available. Of course, they appear to have already sold out for April 1/2. Someone jump on the next round and research this thing on April 8th or 9th, dates which don’t work for us, and report back!

This venture is from Youji Iwakura, former chef-owner of the closed Kamakura, a casualty of COVID.

Quick glance…Looks like the 8th and 9th are not yet open for ordering (“coming soon”)?

The pop up I’ve been wanting to try is Sekali but I keep striking out.

I’ll keep my eye on Washoku, though. (But I’ve still yet to try Toraya v2.0, which I feel more obligated to because it’s right down the street.)

The Washoku forms went up today: 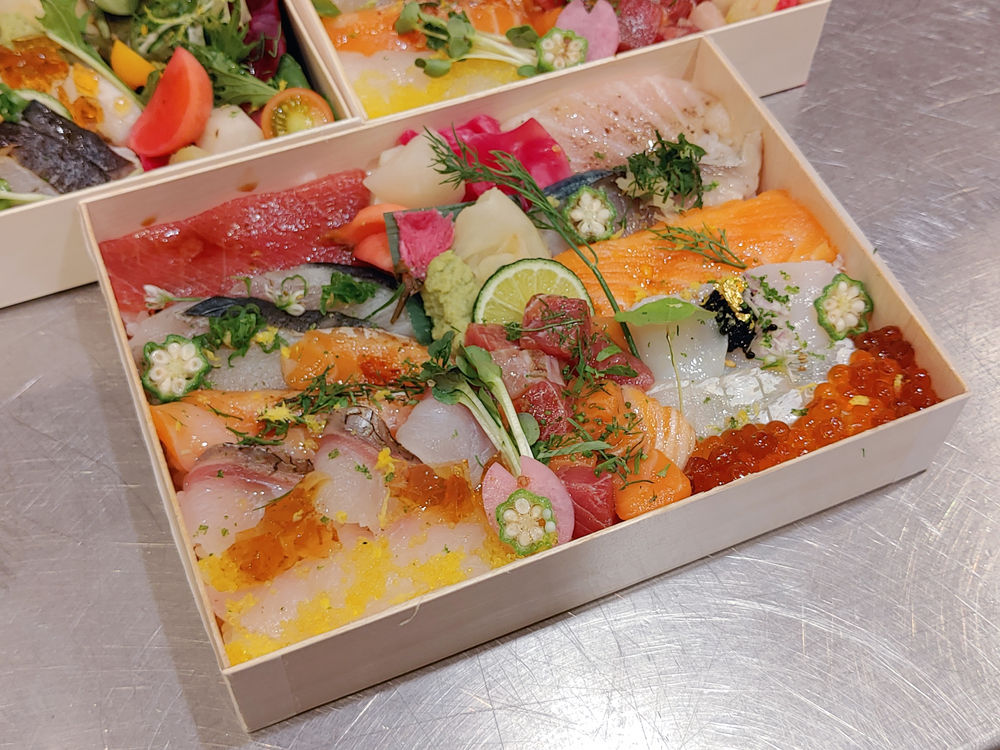 There are several links on their website that promise to take you the ordering forms, but don’t. The one above worked for me.

OK, I did it. The platinum version of their Saturday chirashi (around $90): 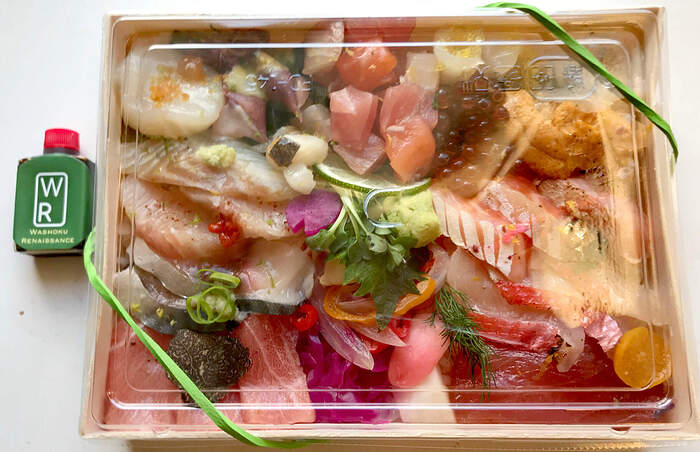 The uni (sweet and clean, among the best I’ve had), the scallop (tender and sweet) and the firefly squid (spectacular) were the three knockouts. Everything else was either very good or very, very good.

There was also, according to the rather faded printout of the accompanying fish list, scorpion fish, salmon belly, yellowfin tuna loin, blackfin sea bass, and kingfish, but it was hard to identify everything.

The presentation was crowded on the small tray and the list, printed on pink on a computer losing ink, while important, wasn’t all that useful in identifying which fish was which. The obvious ones were obvious, and the non- remained so despite the list.

I’ll do it again, because I want to try their sushi, but I can’t urge anybody else – unless flush with extra cash – to rush to do so.

Except that firefly squid – so, so wonderful … I’d go back just for that, with a slice of scallop as a chaser.

Looks like a nice selection of fish, without any fillers I’d throw to the dog. How was the rice?

Was this a dinner for 1? Maybe they could take the truffle slice off and drop the price a bit…

Cafe Sushi used to feature the firefly squid on their seasonal omakase. One of the strangest and saddest developments of the past 2 years is that they have not re-opened for in person dining…

Yes, dinner for 1 – hence pricey. (He’s raised his prices recently. There was also a regular version available for around $20 less, and apparently there is occasionally a gold version for $200-$300.)

The rice was very good, I thought, with the right balance of holding together without being sticky. It did have a slightly-too-sweet tinge, though.

Have you done any takeout from Cafe Sushi? (I seem to recall you may have said you had, but I may misremember.) This meal was takeout, anyway, so not like eating in a restaurant. I just checked the Cafe Sushi menu: they do have firefly squid listed, but it is currently unavailable.

ETA: The truffle slice did nothing for me, actually. I ate it by itself, and it wasn’t memorable.

Have you done any takeout from Cafe Sushi?

Yes, we do a lot of take out from Cafe Sushi nowadays. It is very good, however I sorely miss their omakase counter. They have been doing more premium assortments for special occasions, but it’s not in the same ballpark as their omakase. It’s rough to figure what is going on there. Perhaps there takeout business has been so successful that they are rethinking things. I know they made noise about reopening early last summer and were hiring for some positions, but that never happened. Oh well…

…apparently there is occasionally a gold version for $200-$300.)…ETA: The truffle slice did nothing for me, actually. I ate it by itself, and it wasn’t memorable.

I’d never do any kind of takeout at that price point, but more power to them if they can sell it. I see a photo picture on their website with some gold flake on it. I’m willing to pay a premium for high quality fish, but stuff like that is where things cross the Rubicon for me. I don’t need gold leaf, truffles, etc. I don’t even like wagyu beef in an omakase. Things like that just drive up the price.

I would like to try their nigiri sometime though.

Yes, I’m not one to actively choose a truffle slice (or gold leaf – although I do occasionally garnish Indian sweets I’ve made at home with silver leaf). I went for the “platinum” option over the base because I was promised more interesting fish. (The owner, Youji Iwakura, is very obliging and very responsive on email.) If you look at the list that @Parsnipity posted of the fish in the basic choice – at that time – at the top of this thread, the OP, you’ll see that I did indeed get a somewhat more interesting selection. But, at this price point I certainly can’t do it more than once more in the near future.

@Parsnipity’s list is of their sushi (Fridays are sushi and Saturdays chirashi). Interestingly the fish list that came with my box is structured like a menu for an omakase. Each item is presented as a composed dish: Uni with marinated ikura, scallop with bottarga, toro and truffle, etc. There’s possibly also an intended eating progression in the order in which the fish are listed, with scorpion fish with yuzu flavored roe at the start, and toro at the end. But, when things are mashed together in a small tray, it’s hard to keep the tastes separate, and roe toppings tend to slide off.

At 6 o’clock and at the center in my picture there’s a bunch of delicately cut herbs and lightly pickled vegetables – they were all excellent, although I too late discovered paper-thin rings of habanero at the bottom of the pile.

The pop up I’ve been wanting to try is Sekali but I keep striking out.

Sekali announced a popup for 4/19, but they sold out within an hour. I was about 30 minutes too late. They say they will announce next week a dine-in popup for the end of the month. If you’re on their mailing list, pounce. I’m not yet eating indoors (except in my own home), but from your posts I know you’re more adventurous. 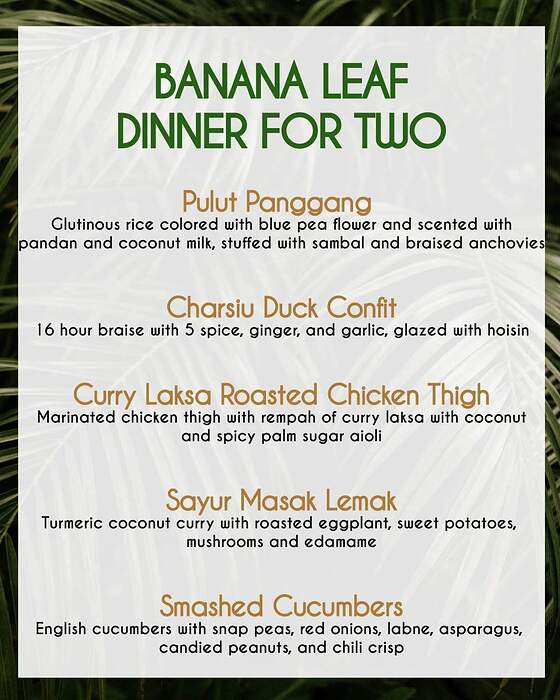 I don’t think I’ve seen any reports on the omakase at this place in North Cambridge, Umami. It has always intrigued me. I went past it today on my way to a friend’s place and got reminded of it.

If anyone has any experience, please feel free to start a new thread because I don’t want to sidetrack this one. Thank you! 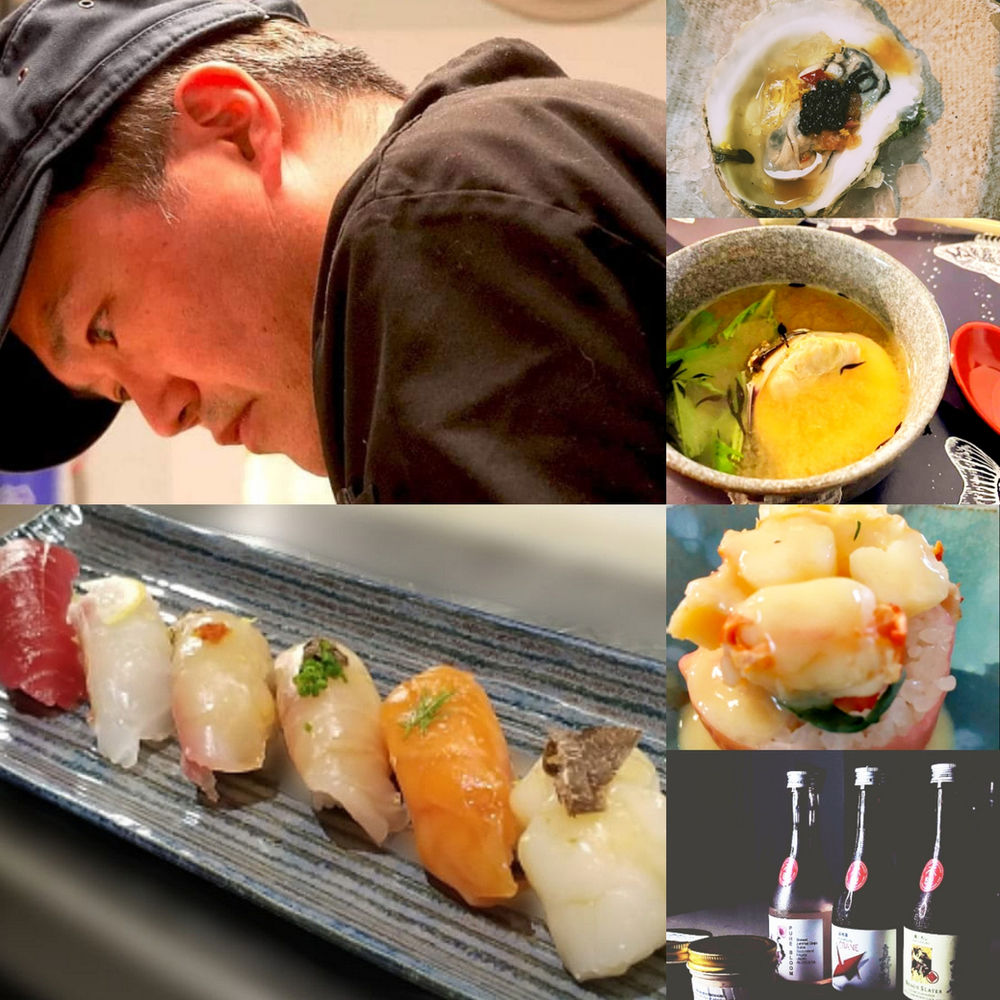 It's the 5th Sushi Kappo Omakase Dinner at Mullaney Harborside Fish Market in Scituate! 14 courses, including 6 nigiri sushi and the signature "lobster on lobster" roll will be served, along with 5 sake tasting (total 300ml /guest) to pair with....

It absolutely is! I just got some yesterday. It comes in one frozen, cryo vacc’d 12 oz block. Not sure what I’m going to do with it yet; there’s just the two of us to feed.