Variations on the Crisp Sandwich?

I didn’t know if this was a type of sandwich, or if chips were simply used like lettuce. So, on a whim, I tried one with plain wheat toast and wheat crackers in the middle, it was like eating a crunchy peanut butter sandwich to me. I might call it a crack sandwich, but I digress. What about putting a krispy donut between a bagel, or a breadstick in a hot dog bun…

I’m not a great fan of the addition of crisps to a sandwich, although I reckon it does work when you want something crunchy to go with something soft, like cream cheese. I prefer to eat my crisps along with the sandwich, rather than as part of it

On the other hand, Mrs H does enjoy a crisp sandwich - nothing other than the crisps as a filling.

Both of us have the same requirements - bread has to be sliced white (this is no place for the output of your local craft bakery) and that the crisps must be “plain”, the flavoured ones are just not right here. If eaten separately to the sandwich, my preference is for cheese & onion flavour.

By the by, when we first moved into this house in the early 1980s, there was a crisp factory a mile or so away. If the wind was right, you could smell the flavourng chemicals - salt and vinegar was not pleasant, although preferable to that from the sewage works.

I never knew I was eating crisps when I had potato chips, maybe they were stale. Actually, I would have guessed that this referred to rye chips (which I think have been called rye crisps, as opposed to potato crisps, in my recollection).

I do not eat potato chips but do like crispy onions and crispy jalapena in our hamburgers together with cheese, ketchup for me ( son does not eat ketchup or mayo) , hot cherry peppers.

which I think have been called rye crisps,

I’m sure I’ve never come across rye crisps. In my experience in the UK, crisps are potato.

Oh they’re out there, as well as crisp crackers, and crispbread. Now imagine a crisp sandwich on crispbread!

“I’m sure I’ve never come across rye crisps. In my experience in the UK, crisps are potato.” 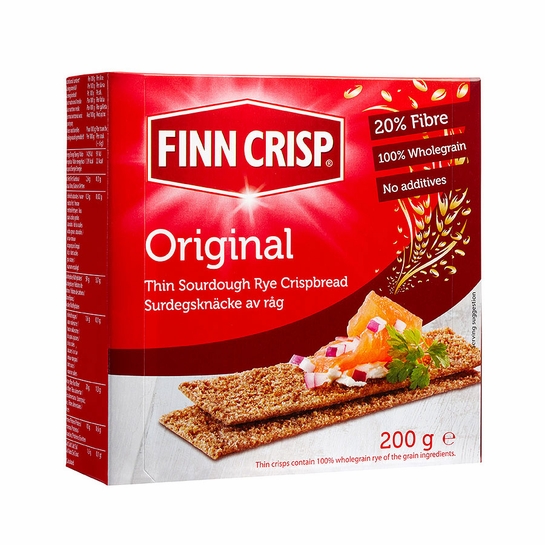 these are Rye Crisps.

Yeah, we have them in the UK - like eating cardboard but with less pleasure.

Now I’m confused but intrigued.
So Fries in Sandwich. affectionately a Primanti’s sandwich in the USA-do people put fries inside sandwiches in other locales?
Sounds better than crackers for sure.

do people put fries inside sandwiches in other locales?

Yep. The “chip butty” is well known in the UK. And would be my absolute requirement if I was eating fish & chips in a cafe, or at home. Although, actually, I would prefer to be eating a “chip barm”. A barm or barmcake is what, in this immediate area, we’d call a bread roll. The forum has previously discussed British regional names for the bread roll. Suffice to say that, within twenty miles, my chip barm will have morphed into a “chip cob” or a “chip bap”. You have to know the right word to use otherwise you risk being labelled an outsider. Almost as big a cardinal sin as asking for ketchup on your bacon barm when you’re in a “red sauce” area.

I remember that discussion.

So ketchup is an object of derision in other places too; at least some things seem universal.

So ketchup is an object of derision in other places too

No, no, no - you misunderstand me. Ketchup is venerated in the UK to go on the bacon barm.

It’s just that, in some parts, cafes & takeaways call it “red sauce”. I’ve never quite understood what’s wrong with calling it ketchup but I’ve always presumed those palces use it to distringuish it from “brown sauce” (which has its place but, for me, not on a bacon (or chip) butty)

Color me confused, red or brown.

Ketchup on bacon -not in these parts…
And red sauce in America generally refers to spaghetti sauce Italiany type thing.
Oh well, maybe you’ll get more Americanized
with Brexit an increasing reality.

maybe you’ll get more Americanized
with Brexit an increasing reality.

A very likely possibility. It is just yet another thing that makes me genuinely despair at the prospect of Brexit .

Still, so long as we can still spell words like Americanised with an “s” instead of a “z” and be able to pronounce it zed, not zee, it may not be too bad.

As for the sauces, both ketchup or brown sauce are pretty much a given with any British cooked breakfast. I had the former with my mushrooms on toast this morning.

I thought it referred to taco sauce. Oh, and what about a tostada shell between two soft tortillas, yet another crisp.

A Taco Bell marketing specialist, you are. Well done. Taco sauce was always taco sauce to me, an admittedly pretty pale suburban kid at heart. Green sauce is always green sauce though, now that I think about it.

Translation, salsa verde. The other would be salsa roja, and the other was salsa marrón. The former is called a sándwich de papas fritas.

I grew up with Mexican food, no Spanish food, so I can only tell you the terms we used everyday. Salsa of any type indicate chunks not smooth in my lexicon. Everyone speaks sort of a Spanglish when in typical eat places like this in my experience.
Very interesting.