Here is an article about some of the things people eat for breakfast around the world. 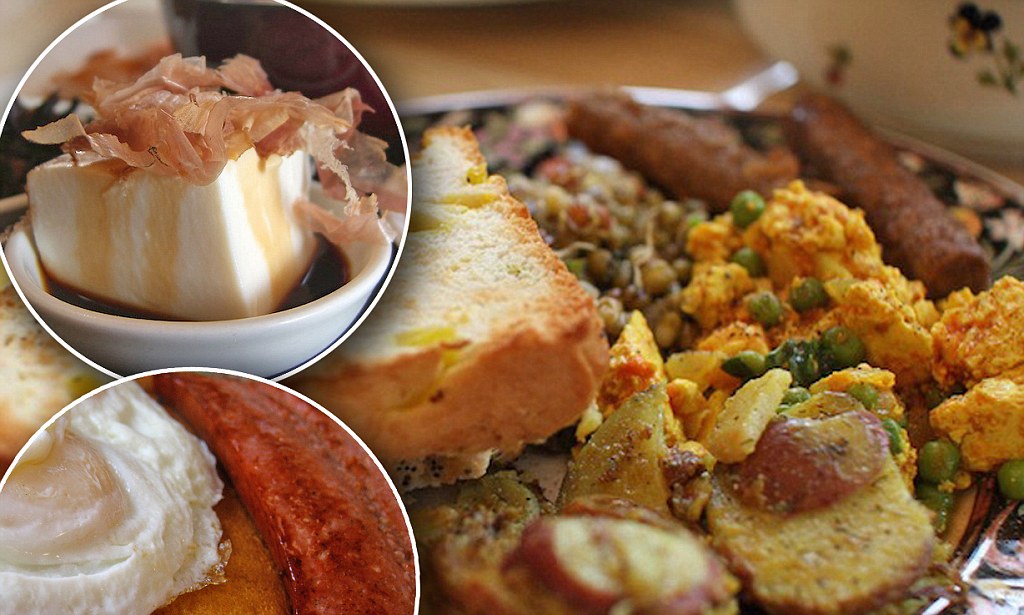 Would you eat reindeer for breakfast? Daring traveller documents 50 weirdest...

Breakfast is the most important meal of the day, but many might feel it's the most mundane too. Twenty-something traveller Victoria Philpott blogs her top 50 from around the world.

How about you, what’s the most unusual thing that you have eaten for breakfast?

I’ll start it out with some of my personal unusual items:

Pickled Herring is a favorite.

Here is an article about some of the things people eat for breakfast around the world.

This was a list she made of weird breakfasts she found online. Doesn’t mean these are what people in those countries commonly eat, or is easily found.

Here are some more ideas…

Gotta say the fungus laden corn would not be a first choice.

I always thought that menudo, like Vietnamese pho, was a breakfast dish. There’s nothing like a hot nourishing bowl of broth, meat, and carbs to start the day or to cure a hangover!

Agreed. That “Breakfast in India” sounds more like a menu choice off the vegetarian side of a hipster cafe menu. Rosemary roasted potatoes and veggie sausage?

But then, for Breakfast in Mexico, “Nachos, cheese and beans always feature heavily and a delicious, spicy breakfast is the norm.”

But then again, Breakfast in Vietnam (from the source article) is “some meaty treat dropped in a semolina/porridge mixture.” (chao/congee)

When I think of Indian breakfast, I almost always think of dhosas, kind of like these.

Usually with a little potato or cheese and chutney.

When I think of Indian breakfast, I almost always think of dhosas, kind of like these.

Dosas are never wrong. But, Dosas are South Indian, so they are eaten in the other parts of the country, but not as often or as commonly found as in Southern India. Just like you can find anda bhurji and paratha (spiced scrambled eggs and flatbread) for breakfast in South India, but it’s a common North Indian breakfast.

Leftover enchiladas straight from the pan anyone?

The Life and Times of the Buttered Roll - Markets - Manhattan

Read the The Life and Times of the Buttered Roll discussion from the Chowhound Markets, Manhattan food community. Join the discussion today.

Think the breakfasts on this site are more interesting than the original link http://roadsandkingdoms.com/breakfast/

That’s great! Thanks for sharing.

San Marcos, Texas circa 1980. Raging hangover, raging flu fever and my soon to be veterinarian friend insisted a bowl of menudo would cure both.

It didn’t but a bit of the hair of the dog, or more worked wonders.

Filipino champorado (chocolate porridge) with salted dried fish, which tastes better than it sounds. That being said, I haven’t eaten it in over a decade, and I’m fine with that

Been there, done that. Leftover catfish from Lotus. A dinner is three large fillets, too much for me, so the extra goes in the fridge. It’s a pain to reheat so tends to get eaten cold.

Just about anything leftover and cold in the fridge is fair game for a breakfast nosh but I usually start with a couple of pieces of fruit, then coffee, then decide if I want to put any effort into fixing anything else.

But after years of indulging, I decided leftover pizza and fried chicken are too good warmed up to eat cold.

A college student here, missing the foods, especially foods to start the day, from his homeland (Andhra Pradesh, I think) started Flying Idlis and the place is really popular with the ex-pat community. I had not known idlis (or dosas) were considered breakfast foods. Most Indian places here are not open for breakfast.

Americans eat the most boring breakfasts, same thing every day. Just try to order a breakfast that doesn’t have eggs. Why are eggs so necessary at breakfast and nowhere else. I like cheese and bread of some kind, add deli meats as necessary.

I hear you as I don’t like eggs at all. I do appreciate a nice slice of ham and a freshly made biscuit with real butter and not mystery spread.