Just look at that mixer. Fabulous.

Dog show is a must at our house. Our dog watches along with us, LOL. I wonder if yours will too? Happy Thanksgiving!

I have that exact same mixer! I inherited from Mr Bean’s uncle more than 30 years ago and I have no idea how long he had it. I love that it’s an original Hobart.

Too bad my cakes don’t often come out as beautiful as yours.

Thanks, Denise. Hope you have a wonderful holiday, too. We’ve had Australian Shepherds for about 22 years. Some of them have been interested when we watched the Westminster show. So we’ll see how our 2 young boys do today. One of them has been in the doghouse because he stole a whole tin of yeast squash rolls off of the counter a few days ago and ate all of them. We were able to get another dozen from the farm stand in Orleans the next day.

One of them has been in the doghouse because he stole a whole tin of yeast squash rolls off of the counter a few days ago and ate all of them.

OMG, I hope your pup is feeling okay. Our own “perp” has gotten better about helping herself though there’s food she simply can’t resist. 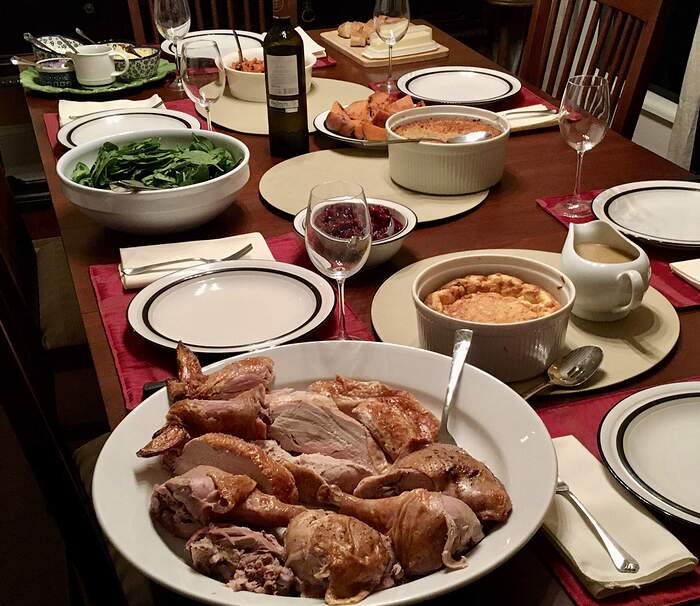 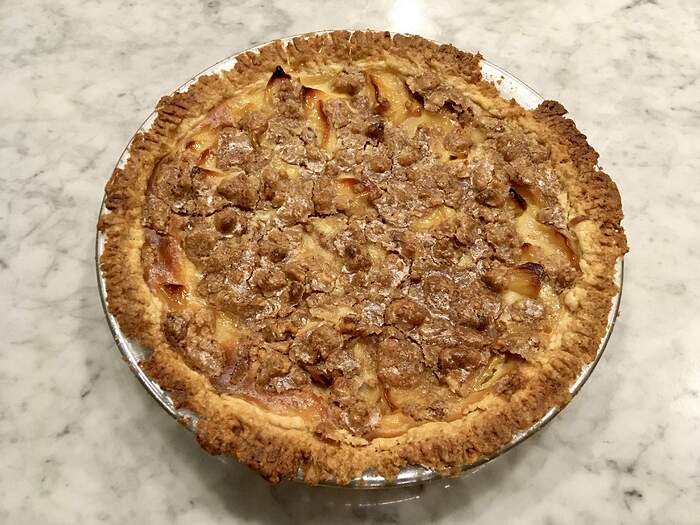 Pie by me. Everything else by my sister. All good!

I made a few Thanksgiving-ish things today.
Pork tenderloin with cranberry sauce, a bread pudding inspired by stuffing with apples, dried apricots and mushrooms, and a pumpkin bread pudding. Heavy on the bread because I was using up 3 large Portuguese rolls. 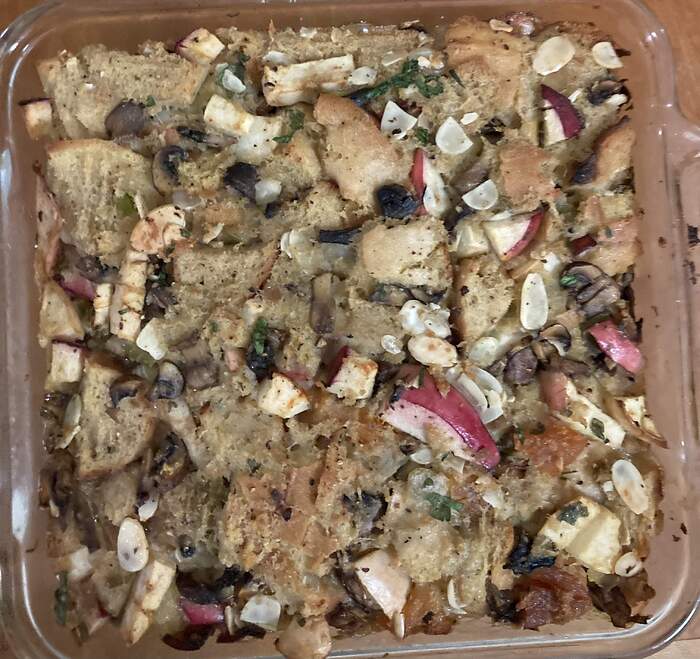 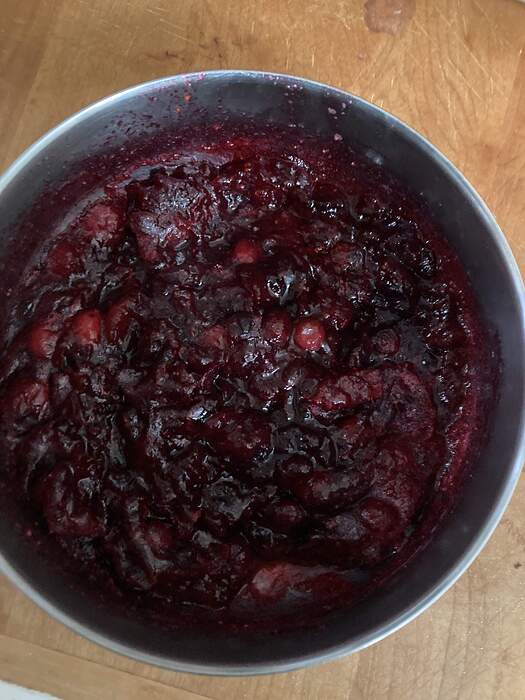 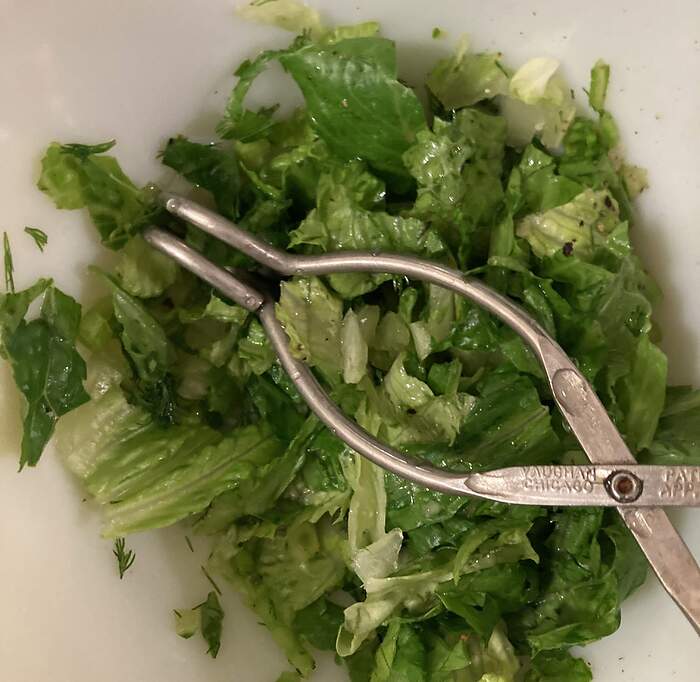 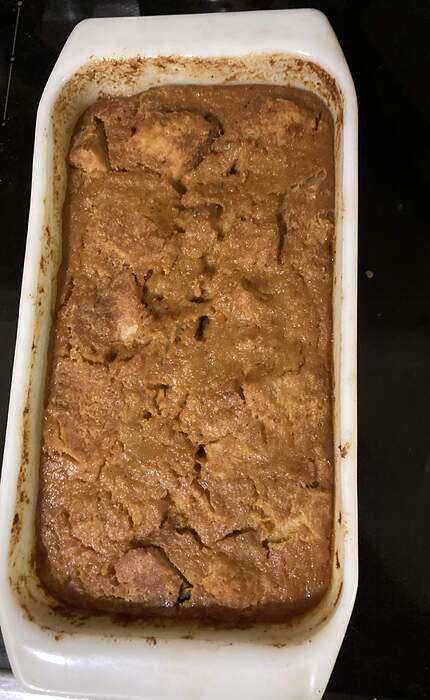 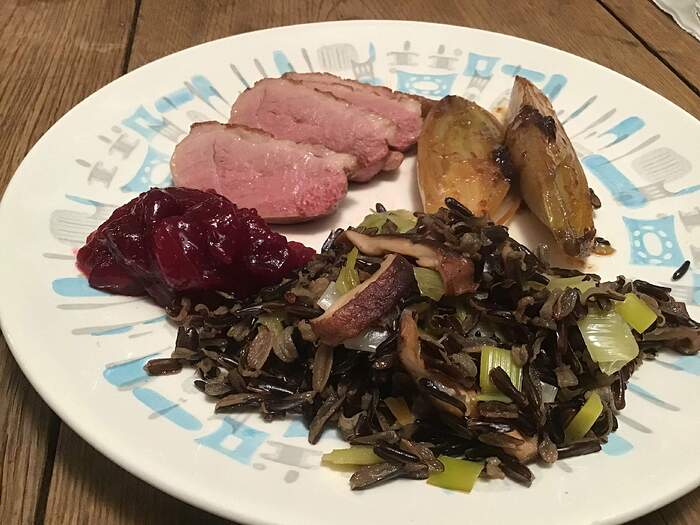 Been a minute since we had wild rice in the house. Your post reminds me that I really enjoy it in fall and winter dishes.

Thanksgiving 2021 is in the books! We feasted at 2pm today, so I’m just about ready for dessert at 7pm. 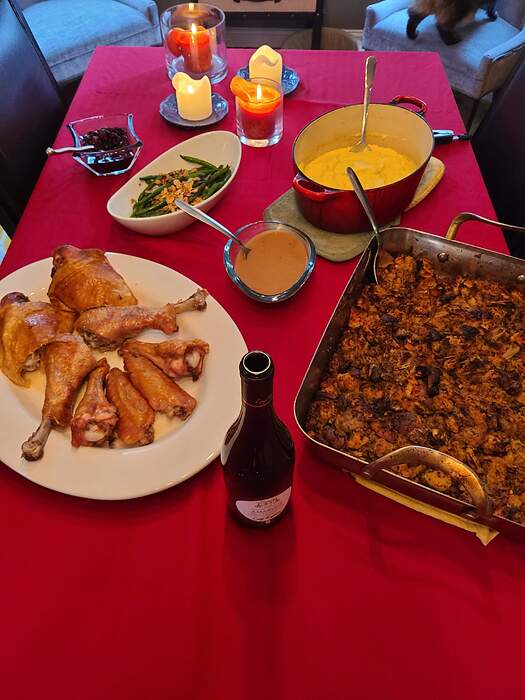 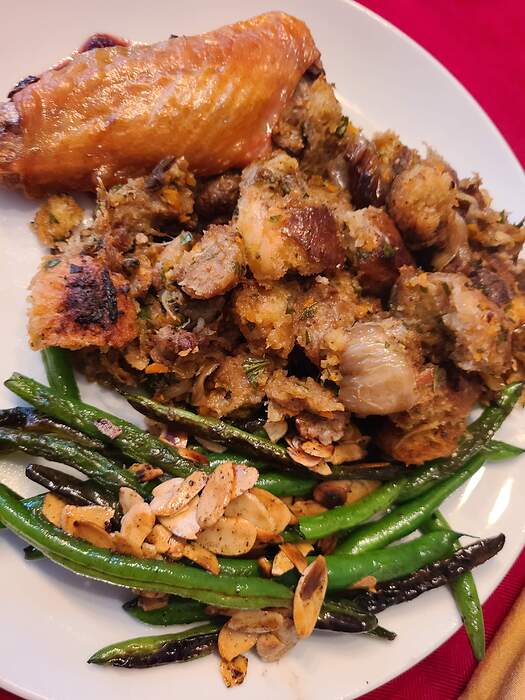 I deconstructed my pies this year so that leftovers would be more palatable later out of the freezer - the little pie crust “cookies” are irresistible little buttery nuggets of heaven! 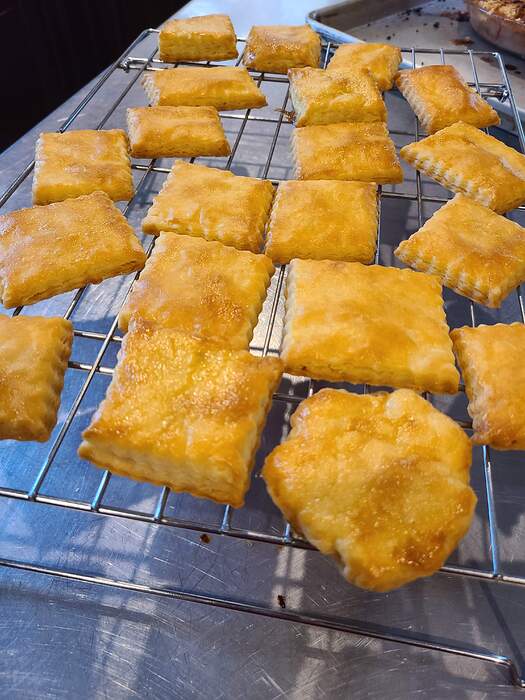 The stuffing to turkey ratio is right, in my book! Thanksgiving is all about the stuffing!! I always go for the wing, as well.

We never had this the whole time I was growing up.

I never had it anywhere, anytime. So I actually really want to try it! Just not the version with the Campbells soup and the canned green beans. The latter, especially, is a travesty to me. I would love to make a homemade version but like many other things, it will be a while till I gather the energy to make a small one for 2 of us, knowing the third in the house doesn’t like cream sauces of any kind…

ordered lasagna and a salad for dinner from our local place

We usually order Chinese the night before Tday

Fun little anecdote. My boy in college has had only dining services food since Aug, basically. And he said what he missed most, and most wanted, on Tday break was Asian food. So I bought some chicken teriyaki from a local place for Tues night dinner. And he tells me this after. He had a paper that was due the preceding Friday that was extended to Tuesday. He got up early to work on it up to the last second, when his grandpa picked him up from campus. Only ate some dried fruit (from his dorm room) until about 30 min before the carpool arrived, then ran over to dining around 1130 for “breakfast” and ordered himself chicken teriyaki! Of all the coincidences!! I did not expect my dinner to have to compete with his breakfast.

Now that all the food is eaten and the family is scattered again, here are some thoughts. I’m done with whole turkeys. Not that it’s a ton of work, but no one likes them all that much. For the work, I could find something much more popular. Beef roast. Costco chicken rotisserie. I’m also in a rut on the rest of the stuff and I think next year I’m turning everything on its head and trying all new stuff. Even the stuffing, I wasn’t jazzed. I always make the epicurious wild mushroom and leek, and I love it. But too much of a good thing. Next. Both our pumpkin pie and apple rustic tart were meh due to being not enough sweet. Isn’t that crazy? We went too far in the other direction. The roast green beans and mashed potatoes were good but not inspiring. Ditto the cran-orange raw relish. I made way the hell too much gravy bc I love gravy. But now, the mashed, stuffing are done. The remaining 3 lbs or so of turkey meat is going in the freezer for a couple of months until people can face turkey again.

What would y’all do with 2 lbs of turkey-caramelized onion gravy?

Freeze the gravy in portions and haul it out with the turkey. I’m never cooking Thanksgiving dinner again. This was the first time in 5 years. There were only 3 of us, but I went all out with the menu. Husband & I prepped ahead for days. I had a gout attack in my right knee on Thursday morning and couldn’t bear to be on my feet. My husband is an enthusiastic but not experienced cook, and though our friend stepped in to be his sous chef things did not turn out well…when you don’t know what you’re doing, follow the directions and don’t ad lib.

I stopped making a whole turkey several years ago. Too big of a hassle, and I’m the only one who likes dark meat. I have usually done a turkey breast or a half breast, depending on how many people there are. One year I got a boned and tied turkey breast - so easy to cook and carve.

With the gravy, I would portion it into smaller quantities and freeze it for future meals.

But what goes with turkey gravy besides more turkey? I feel like chicken gravy would be more versatile, and I could use it as a sauce for swedish meatballs and noodles for instance. Not sure about the turkey though. Much gamier flavor…

What would y’all do with 2 lbs of turkey-caramelized onion gravy?

I’d blend some with heavy cream and use it in turkey pot pie a few months from now.

Jazz it up with different herbs for meatloaf with gravy. Or poutine?

I know. I had a 19 lb bird and I was like - oh, lots of fat, lots of drippings, lots of earlier homemade broth. Let me just make it all into gravy. Big mistake.

I may do the pot pie idea, as well as the swedish meatball and noodle idea. And then throw some into some soup as a thickener.