Note that SE’s tests (with the help of Stanford of the East’s “Fart Squad”) were confined to adding the Beano to food, not taking the capsules P…O. (swallowing them, as instructed). This left me wondering: As long as an eater masticates, is there any gaseous difference between whole and pureed, canned or dry?

As someone who is often impacted in her digestive system when eating beans (canned or cooked from dry), I have found that taking Beano, as directed, does diddly squat most of the time for me. Haven’t tried adding when making beans. Can’t speak to the mastication.

I sometimes have fewer issues with purees (hummus, refried beans), as well as using a pinch of baking soda when soaking, discarding the soaking water and rinsing, and then cooking with another little pinch. Not consistent though by any stretch of the imagination.

I embrace my flatulence.

And welcome it as a sign of a healthy gut biome.

Ignore flatulence and all your troubles will be behind you.

I don’t seem to experience the flatulent effect of beans. I make them all the time sans fartage. Beans and rice are a part of my diet. I do add some cilantro at the end. Maybe that’s my anti carminative, I guess; but I also use some garlic, quite flatulent. Guess I’m lucky there. I just rinse a bunch of times, strain, rinse again. I (almost

) always seem to get a nice mix of bust opens and whole beans wanting to do the same. I feel bad for those who love them and suffer.

I wonder if lentils do the same to those afflicted by mean bean disease??? When I don’t bean, I like to lentil. They don’t gas me either.

What they tested in the Harvard study was the effect of bay leaves and kombu in degassing beans. Not any of the many other supposedly anti gas herbs and spices: fennel, caraway, hing, cumin, epazote, and and so on. Wonder why they didn’t try any of those.

Many Indian babies’ first solid foods includes dal and rice. They are often fed ‘baby masala’ (as we called it in my family): a powder made of toasted and ground equal parts of cumin, ajwain, and fennel. Add a pinch of this to every solid meal to avert gas. We thought it worked, but I doubt it’s been scientifically tested. Just the wisdom of centuries of desi grandmas.

Interesting. Indian restaurants around here have bowls of seeds, fennel and others, at the entrance. It’s said that a spoonful of them as you leave prevents flatulence.

fennel and others, at the entrance. It’s said that a spoonful of them as you leave prevents flatulence.

These seed mixes are overall mouth fresheners and digestives (not just for gas). The seeds can include fennel, coriander, and a few others, with a few aromatics mixed in.

ETA: here are a couple of recipes, though I just get mine from the Indian store where there are dozens of varieties: 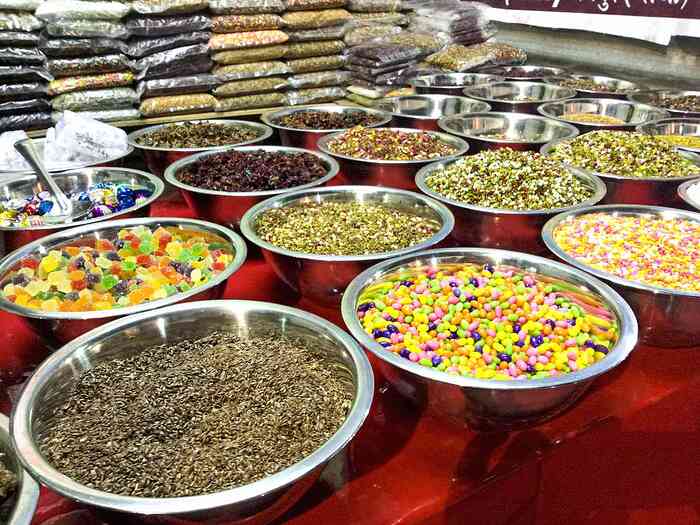 Freshen Your Breath With Indian Mukhwas

Mukhwas is an Indian mixture of seeds and sweets usually eaten after a meal to aid digestion and freshen the mouth.

How to make Ayurvedic Mukhwas, recipe by MasterChef Sanjeev Kapoor

Interesting experiences with the seeds and spices. I’ve heard and tried all sorts of stuff, but I’m not sure if anything added has helped much. What I do know for myself, is that I can get away with having a beany meal or refried beans (which I LOVE) with Mexican food, IF I only eat them for one meal, and not two or three in succession. I give it a day’s rest, and then I’m good.
A bit of trivia: it seems as if older people have more flatulence, and it can certainly be loud too - have had to chuckle at times listening to older relatives. The fact is, it’s not more common in elders and they don’t have more gas, but gas builds up in the lower colon where they have less control over it.

When I want people to take my flatulence seriously, I load up on steamed cabbage and boiled eggs.

The aroma makes the dead rise up and search for an oxygen mask.

We should have a thread on the foods that inflate us with methane.

For me, the perfect synergy is some combination of: beans, beer, cheese, and processed corn. Honorable mention goes to pancakes and melon.

Sure, but also a dinner out of nachos and carne asada.

Beans have nothing on Jerusalem artichokes.

I see your Jerusalem artichokes and raise you a 10 day old ripe Durian.

Cream of broccoli soup does it every time for me. Luckily, I have the maturity of an 8-year old, so I enjoy every bit of it.

And that’s for dinner. If I have eggs the next day, after that mess, might need to regrout the bathroom tile.

I’d say you already do!

Last night I made French Onion soup for four of us, starting with 4 pounds of onions. Even though I had to make it vegetarian, dairy- and gluten-free for the one daughter, it was very good and we finished it off.

That means we averaged a pound’s worth of onion per person. I don’t know about other folks, but a big load of onion gets me and my kids going.

So, Durian’s as enjoyable coming out as going in? Never had it; but I’ll take your word. Word of mouth, that is.