I braise spare ribs in a slow cooker usually in some sort of curry sauce.
In the US, spare and back ribs are mostly smoked and slow cooked BBQ style. I like ribs cooked like this and also Chinese restaurant style but what are some other methods of preparation maybe from other cultures that consume pork? Thanks!

I put on a favorite pork rub and envelope-wrap them in heavy-duty foil with some apple cider inside the foil. They go into the oven to cook for a couple of hours on a medium-low heat. I open it up, pour out the cider, and slather them with my favorite BBQ sauce to finish cooking. No liquid smoke.

It’s not the best way to cook them, but it’s really the only method I can use being in a HOA situation where gas and charcoal grills aren’t allowed.

Sometimes I’ll dry brine a 5-6 bone slab of spare rib with salt 8-12 hours in advance, then add some garlic/onions powders, a bit of pepper, and place in a skillet on medium heat to sear both sides initially. Then I turn the skillet down to fairly low, lid the pan and let them go an hour or more, with a final higher heat (lid off) to drive off some of the moisture. I really like how they turn out. Then again, this is how I prefer frying chicken legs and bone-in thighs, too (just dry brine, G&O powders).

I tried it once with back ribs but those bones are so curved that I had to keep tilting this way and that to get it seared all over, so I don’t cook back ribs this way anymore.

I’ve never thought about a curry braise for ribs, or flavoring ribs with any kind of curries - no reason why, it just never came to mind. I think I should give it a try. Or maybe use a curry powder mixture in place of the G/O powders and otherwise dry cook as per my usual.

Bake 'em ahead of time at 325°F for 40-45 minutes and remove. Before serving nicely brown/heat through using grill/broiler/cast iron. 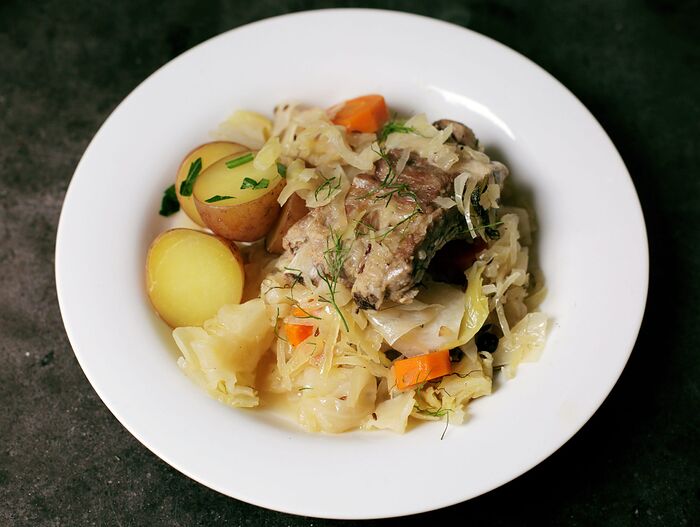 Pork Ribs with Sauerkraut, Cabbage and Apples By Andrew Zimmern This hearty comfort food dish is the autumnal food you want to be eating this week. The sauerkraut is balanced by the apples and pork, giving it an irresistible sweet and sour vibe...

Ya know, gang, the Chinese cook spareribs in a lot of different ways, not just the “bbq” style to which many people refer. One of the most common in a Chinese home is steamed. Cut the spares (or have the butcher cut them) across the bone into long strips cut longitudinally, so the bones are only 1-2" long. Cut between the bones to yield large (sometimes very large) bite-sized pieces. Make a marinade of Chinese cooking wine (I cheat and use sherry or mirin, because I don’t usually have shaoxing on hand) and a little baking soda. Add whatever you want to give it more flavor: minced ginger, salted black beans, soy sauce, brown bean sauce, five spice powder, sliced jalapeño peppers, etc. Let it marinate in the fridge for a few hours. Set up a steaming rig of your choosing. Put the ribs and marinade in a heatproof bowl, the wider/flatter the better. Steam until done.

Done with salted black beans, this is a basic dim sum dish known as dow see pie kwut. You can also use the steamed ribs as a meat component with assorted stir-fried veggies.

I love Lidia Bastianich’s spare ribs roasted with vinegar and red pepper. A friend told me about them and I was highly skeptical of the technique (high heat roasting) and then he made them for me and they were fabulous. I have since made them and loved them again.

i have braised them with cabbage, potatoes and onions,

Korean - I like using gochujang
Chinese - I like both steamed with black beans and stewed like red cooked pork
Indian - vindaloo masala is really good with pork, as is a northeast style ghost pepper version

Haven’t tried Viet flavors yet, but lemongrass pork is so delicious I bet the same marinade would go great with ribs, even braised. Or the caramel sauce version.

I make a simplified version of this using a recipe I got from my Hungarian grandmother. She called hers Szekely Goulash and served it with sour cream. It’s basically pork ribs (country style if I can find them), onions, sauerkraut, paprika, and caraway seeds. Oh and don’t forget the ash from her ever-present cigarette…I don’t smoke so my version isn’t entirely authentic!

I wish I could find the recipe I had about 32 years ago for something that now sounds like ‘make it and forget it’ spare ribs. As I recall you would grease a covered 3 quart casserole. In it place 8 or so beast short ribs that were dusted with flour, salt and pepper. Sprinkle it with an envelope of dried onion soup mix and a package of wide egg noodles. Pour some kind of liquid over, cover with lid and additionally with foil and bake at 300° (?) for like, 3 hours? No stirring. Everything was tender and delicious, but a bit greasy. I had planned on trimming a lot of the fat away the next time I made them, but lost the recipe. I had two babies at the time and we had nap time while it baked. Any ideas?

Done with salted black beans, this is a basic dim sum dish known as dow see pie kwut. You can also use the steamed ribs as a meat component with assorted stir-fried veggies.

I love dishes made from the black beans. I usually use with clams or crab but forgot about how good they are with ribs. I have a package to use up and have some ribs in the freezer to use up too. I’m glad you mentioned it. I’m assuming salted black beans are the same thing as fermented black beans? Is that correct? I’m talking about the small dried ones that come in a bag.

Well, Vann’s Spices makes something called Beijing Rub. It’s like 5 spice powder with more garlic and it contains sugar which makes a glaze. I use it on baby back ribs in the oven, but I also add a light coating of Rick’s Ragin’ Cajun hot bbq sauce about 15-20 minutes before they’re done. God knows what cultures I’ve demeaned with this concoction, but I gnaw them all up!

I’ll have to call Vann’s to see how I can get more. They no longer have an online store, and the one grocery I know of that carries their stuff doesn’t have the Beijing rub, though Vann’s still makes it.

Alternative, no paywall, link for the Lidia Bastianich recipe

I’ve made this Rozanne Gold “Radically Simple” cookbook Peking Pork with Scotch and Scallions
using country-style ribs. Four hours in a 300 degree oven. Key ingredients are Hoisin sauce and star anise, as well as Scotch whiskey. As the blogger comments, the recipe is quite forgiving and scales well to whatever amount of meat you use.

i have a frozen half rack of baby back ribs. too little to really bother with smoking or something too onerous. is this something to use for sunday gravy (something i have not made before) or will those bones splinter and ruin it ? i was inspired by the godfather. also enjoyed seeing @emglow101 's gravy photos.

Yes, I am sure they would be a nice addition to your Ragù and no they will not splinter.
Do find a recipe that calls for lightly browning the meats as a first step.