The glories of hams from the south (U.S.) aren’t sufficiently celebrated, in my opinion. Part of the problem is the difficulty of getting them in other parts of the country. Last night I made an effort to sample some in New York, using Caviar to deliver them to me from Cannibal and Momofuku Ssäm.

I tried Benton’s (salty) and Finch (sweeter, but stringier) from Ssäm, and Newsom’s (a little salty+funky on the aftertaste) , Broadbent (dry and very salty on the aftertaste), and Johnston (softer, most “ham” like) from Cannibal. Ssäm has others that I plan to try. Are there other sources in NY or Boston that you know of? 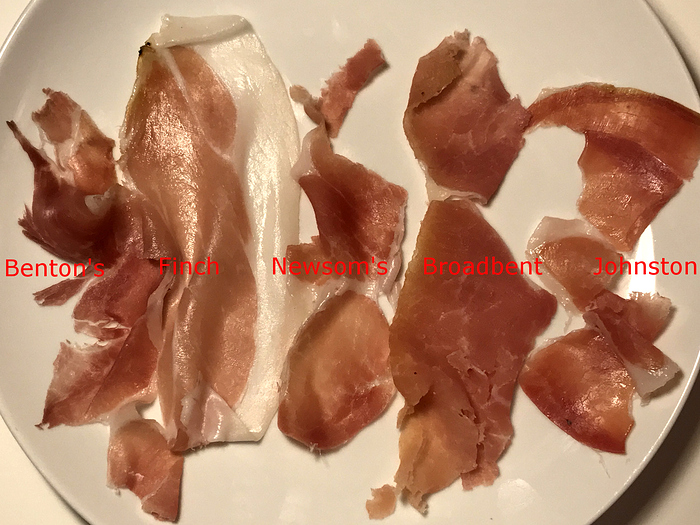 I haven’t been to NYC in twenty years but try searching for “Country Ham”. You might get a few more hits.

have you tried the Johnston Mangalitsa Ham? I find it almost par with the pata negra bellota , superior to the spanish serrano ham. We bought the whole , placed it in our ham rack from Spain. for Christmas, lasts us a few days with friends over. The cool temp avoid refrigeration git. The fat from it is fantastic with greens. Sliced paper thin using Michelangelo Knife for ham, served with crusty bread, rubbed with garlic, juice of campari tomato is heavenly. Here is the site. You can find promotion for shipping often.

The Mangalitsa pig produces more monounsaturated fat than modern breeds which produces a pleasant aroma and a buttery flavor. The breed was imported by Heath Putnam to the United States from Austria. Our curemaster Rufus Brown says he has never tasted a finer cured ham or bacon than the ones from the Mangalitsa pigs.

We are proud to offer a traditional Mangalitsa whole ham with the leg and foot on . This ham can be placed in a European ham rack for slicing or hung until carving.
More Info

Have had Mangalitsa ham from Formaggio Kitchen in Cambridge, but I don’t think it was Johnston’s. It was very good, though, described by the staff member who suggested it to me as fat held together by smoke. Thanks for the suggestion.

For your reading enjoyment:

I was tempted to start a new thread titled “No Ham in Gotham?”, but decided against it.
Binge watching Babylon Berlin on Netflix tonight, all that darkness, and blood, and weird dancing put me in the mood for ham. But Cannibal had none – NONE – and Ssäm had just one (Edwards Surryano – a fantastic, complex, ham, but, still, just that one).

What’s going on with this country ham shortage in NYC?