Which model of SV bath you have got? I’m always interested in SV cooking, but aware of the cost of the equipment.

I have a simple transparent container with a lid specifically designed for the circulator. This is the exact one I have (photos from the web): 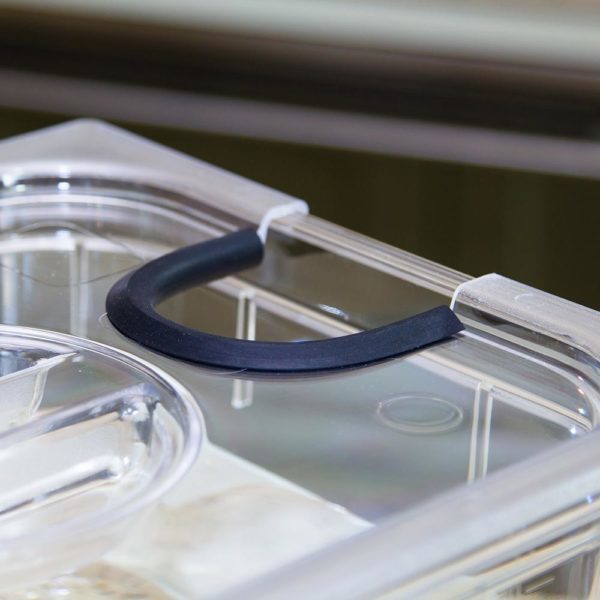 What it looks like when the circulator is attached. I don’t have a rack like in the photo, I use a heavy metal trivet to keep the bags from floating. It works and much cheaper than the rack. 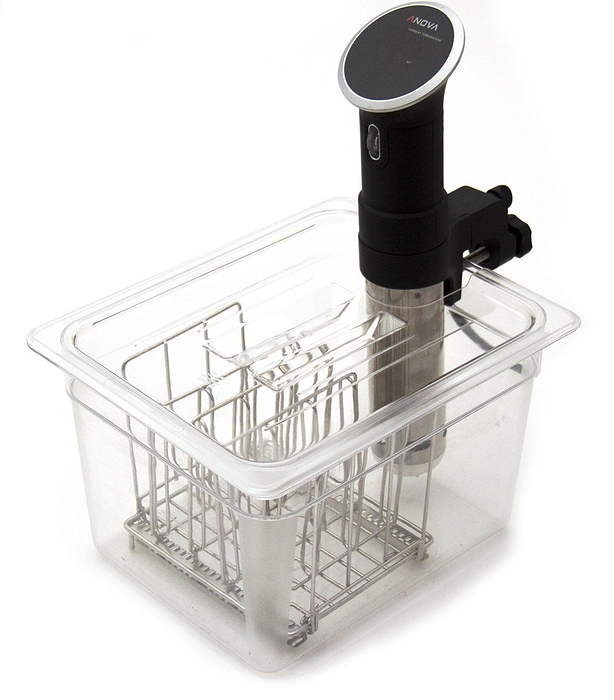 Edit: Oops, I meant to reply to @naf

I have the Anova, and for the first months I simply attached it to a large stock pot filled with water. Now I have a plastic bin (sous vide grade) for when I am cooking large amounts of food, or whole cuts of meat. Sous vide cooking is much easier than magazines and websites would have you believe.

Temperature + time is usually pretty standard, and after a few tries, you figure out the best temperatures to get the food to your personal taste of doneness, much like any cooking.

Thank you! I will sure to start playing around with SV when I return home from vacation. The only worry is once starting to use sous vide, it will be more difficult to go back using normal way to cook? Is this the case for you? ( I’m still quite attached with my cook wares.

Gosh no, I love my skillets and sauce pots. But the sous vide is really great for tough cuts and meat that is easy to over-cook (chicken breasts, lean pork chops, etc.).

It’s especially useful in summer when grilling for large groups of people.

So, there’s a guy on the Chambers stove website who uses his cooler for soups vide. He fills it w/water @ 145 degrees, pops his meat in a baggie, attaches it somehow w/a bear clip, and retrieves it 1.5 hours later. Photos look superb. I think he bought an Anova last month. But a cooler? Wow. Cheap, low tech. Gateway drug??

Yeah. I use a couple cutting boards to cover the water. It heats more quickly when covered.

Darn. Autocorrect. That should be sous vide.

hope u get well soon.
admire and envious of your stamina traveling and still have time for this.
am still contemplating on sous vide
perhaps now, the joule one as it is smaller with other advantages 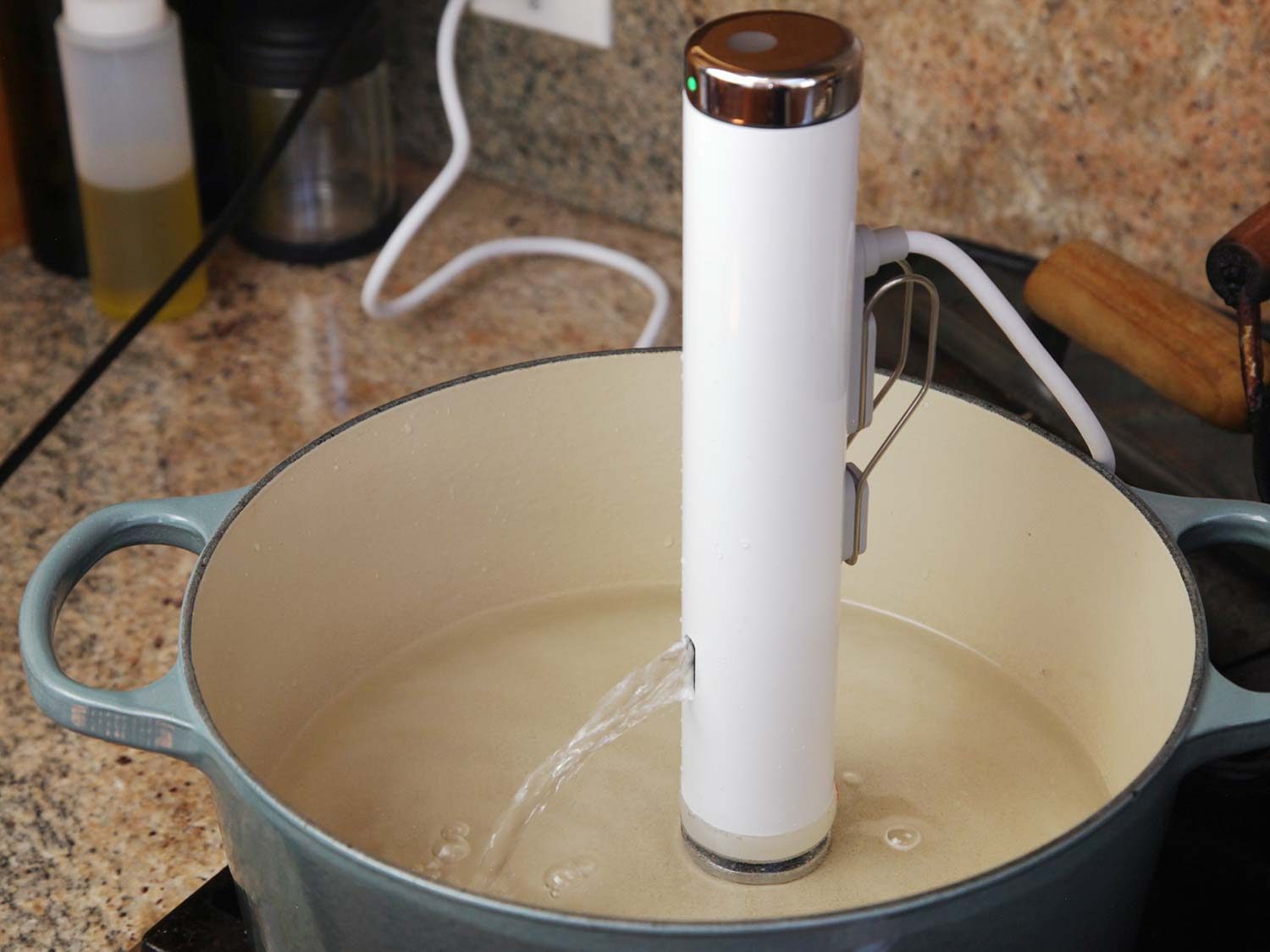 We Put ChefSteps' Joule Sous Vide Circulator to the Test

After a long build-up, the Joule has finally been released and is shipping now, at a price of $199. I've been testing a pre-production beta version of the unit for several months now and an actual production line model for a few weeks. Here are my...

yes, that was what it was intended for

Which model of SV bath you have got? I’m always interested in SV cooking, but aware of the cost of the equipment.

There are certainly pricier equipment, but the Anovas mentioned upthread is fairly economical. I think their cheap models sold at around $99 during the holidays last year.

Those who are considering getting a SV circulator: make sure you do a lot of research. There are many options these days as SV cooking is getting more popular. There’s also another type which has a built-in bath. Do an image search for circulators, but type “-anova” so you can see other brands. Professional brands are a lot more expensive but they sure look good.

I got mine 3 weeks before Anova released their Nano. Would have preferred that one. I don’t want to use any app, just entering the temp and time manually is all I need. The Anova’s timer function is utter rubbish (I almost returned it!).

In America you can get this one (Vacmaster): Anyway, my second one (someday) will be something like this (an exact copy of the above): 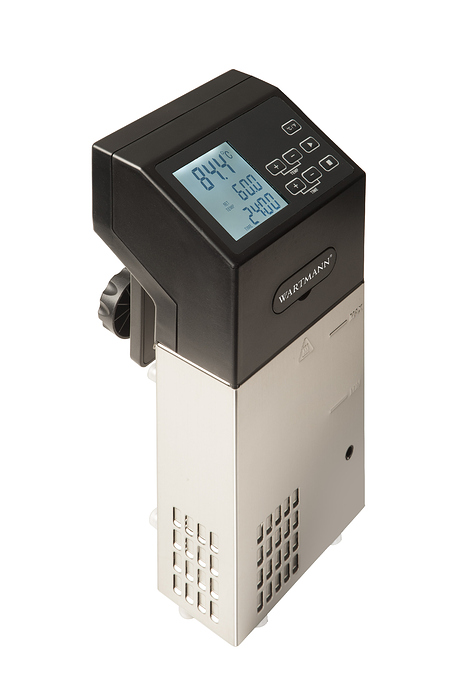 I just ordered a Vacmaster, but here in Europe it’s sold as the Steba SV100, and it’s a little less money than on the sife you mentioned. I’m looking forward to getting my hands on it.

I’ve used an old Playmate cooler. Kind of a pain to cover (used plastic wrap and foil) but it insulates well and is water tight. Plus I already had it!

You could get some Reflectex foil covered foam insulation. Not expensive for a 25 foot roll ~$16 and cut to size with a cut out for the circulator. Let it float on the water surface you’d have enough for a life time

Great idea! My use of the cooler was a last minute thing once I realized my usual contraption was too small for the amount of short ribs I’d purchased at Costco.

I’m still experimenting and learning how/when I will use this. Then I’ll have a better idea of what else I need to get.

I use my IC regularly to thaw meat from the freezer. All my frozen meats are in vac bags. With water at room temp and the circulator running with no heat, you can thaw in half the time

I’m pretty new to using sous vide. The past few years my daily life has become one of long work commute and short physical energy. I anticipate the use of sous vide will be conducive to having actual dinners rather than the handful of nuts that happens too often.

I especially like that it won’t heat up my west facing kitchen in the summer. We’ve been in the 90’s for over a month with several more months of heat ahead…

So far I’ve used it for longish projects. 10 hours the shortest, 52 the longest. I’ve been pleased with the results using beef and pork. Poultry* had an odd texture but feel a bit more experimenting is in order before I nix it.

I’m well versed at cooking seafood (no problem with doneness) plus it is so quick that I don’t see a plus in using S.V. in this manner for my life style. Except octopus or squid - seems it could be very useful.

I haven’t yet tried S.V. with non-protiens. Carrots and rhubard are on my shortlist though.

I’ve seen mention of using it for much shorter uses. Those of you who do so please give details!

*Poultry may have been less than 10 hours. I’m away from my notes and it was my first S.V. attempt so it has been several months.