Little India has been one of my favourite neighbourhoods in Singapore from the time I was a little kid. My Dad, a great lover of South Indian/Tamil breakfast foods inculcated in me a love of the same kind of dishes he adored: kal-thosai (soft, homemade type of thosai), upuma, poori, battura, roti prata (Singapore-speak for paratha) and idlis.

And for the longest time, our family favourite for a South Indian breakfast is Komala Vilas, exactly 70 years old this year, but still up there among the best in Singapore. Komala Vilas elevates vegetarian South Indian food to an art form, and generations of Singaporeans walked through its doors on Serangoon Road, the main thoroughfare of Little India. 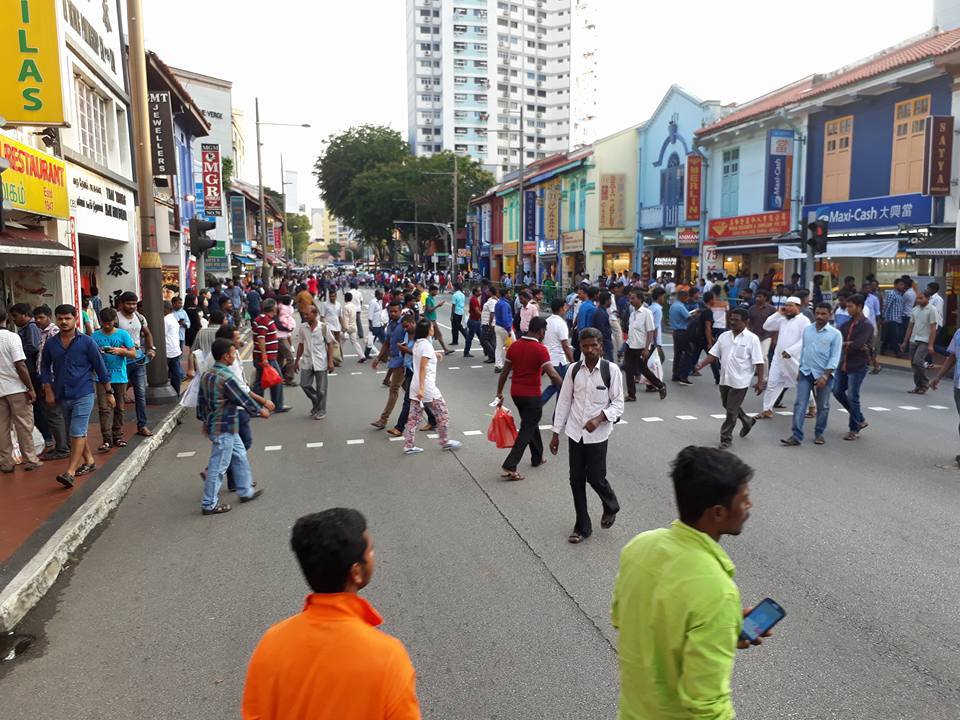 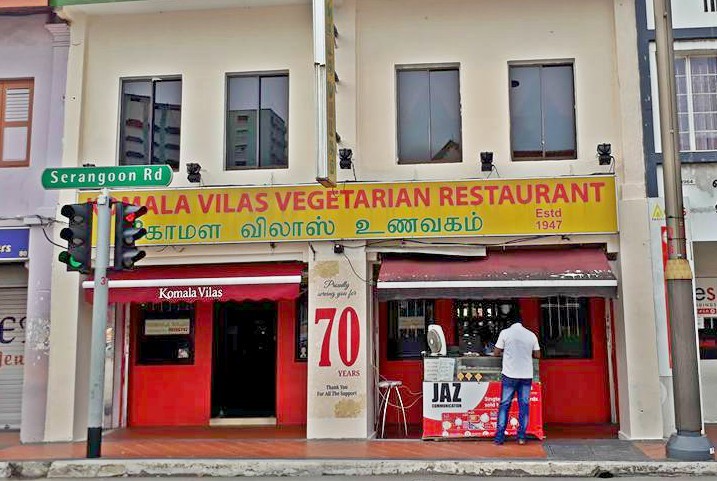 My breakfast option this morning was a Masala Thosai - “thosai” is the Tamil (one of Singapore’s 4 official languages besides English, Mandarin & Malay) term for “dosa”, the thin, crisp crepe-like Indian pancake that, to me, is one of the best breakfast options anywhere in the world. The Masala Thosai comes in a rolled-up form, with a dollop of spiced potatoes-onion-carrot-peas filling in the centre. 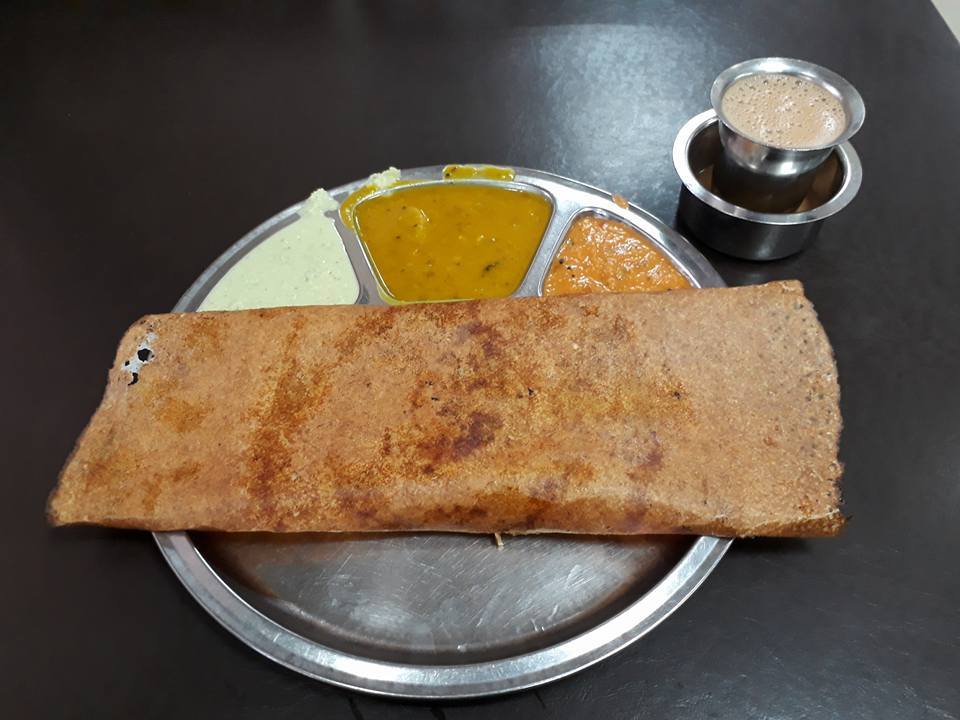 A standard order of thosai usually comes with a white coconut chutney, a yellow dhal curry, and spicy, orange-hued kara-chutney. 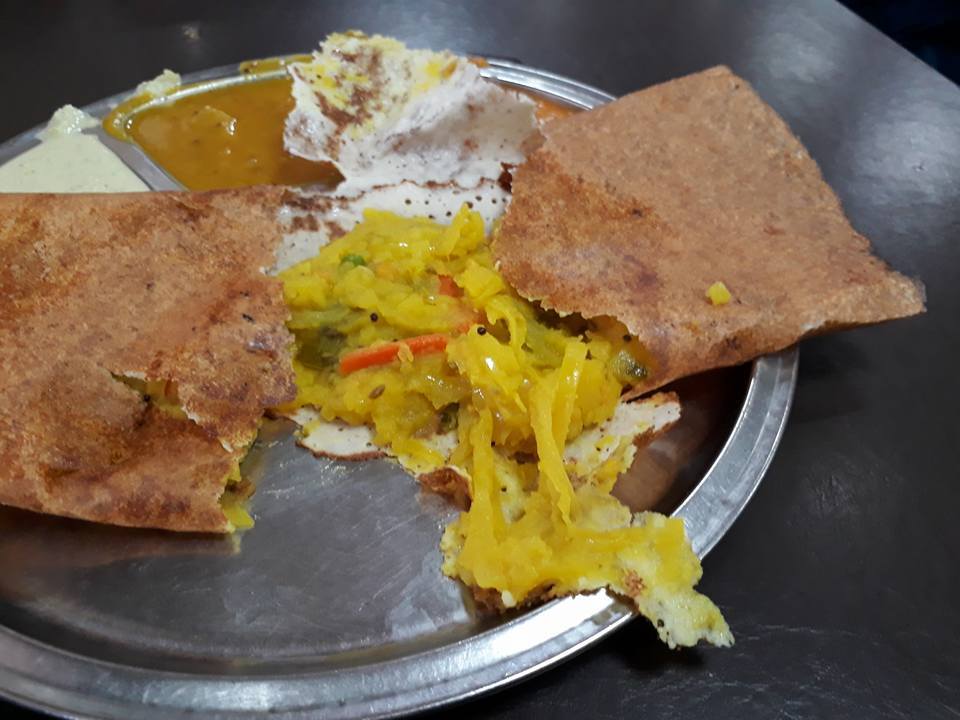 The beverage just has to be Indian milk tea - strong, milky and (unless you specify otherwise when you order) very sugary-sweet. 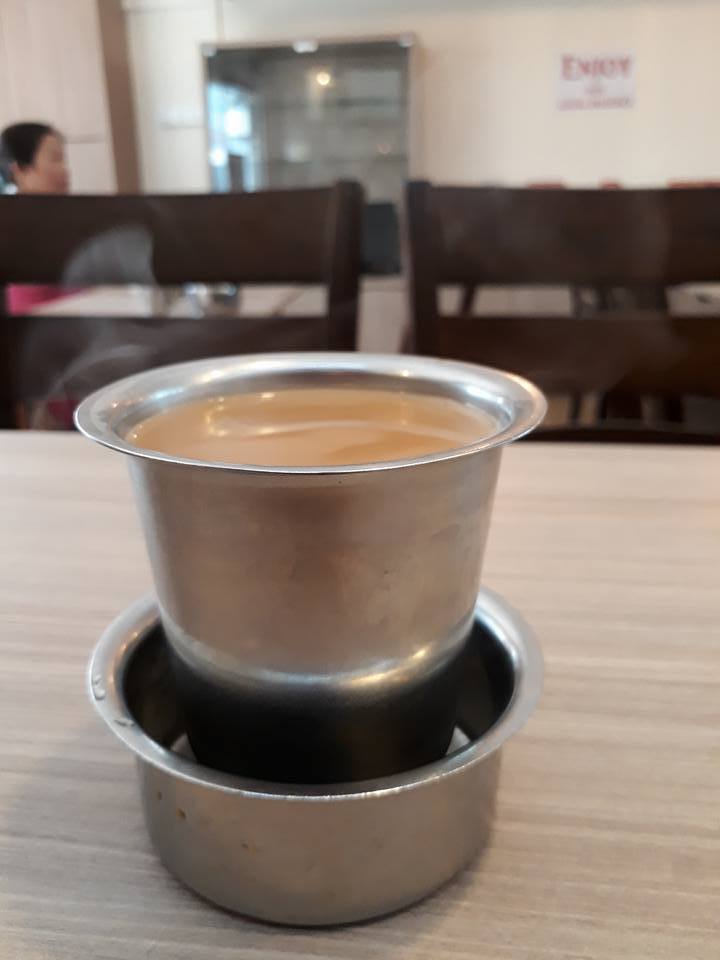 Hot beverages are usually serve in tall thin metal cups, resting on a shorter, wider metal cup. One pours the hot beverage from one cup into the other repeatedly to “cool off” the beverage before drinking.

Breakfasts at Komala Vilas never disappoint - waiters whom may seem standoffish initially quickly warm up to you. The atmosphere in the restaurant’s closely packed dining rooms (both downstairs and upstairs) is often noisy but convivial. 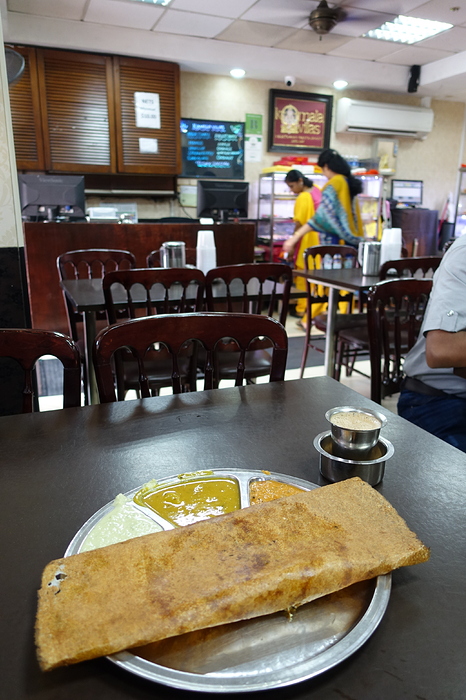 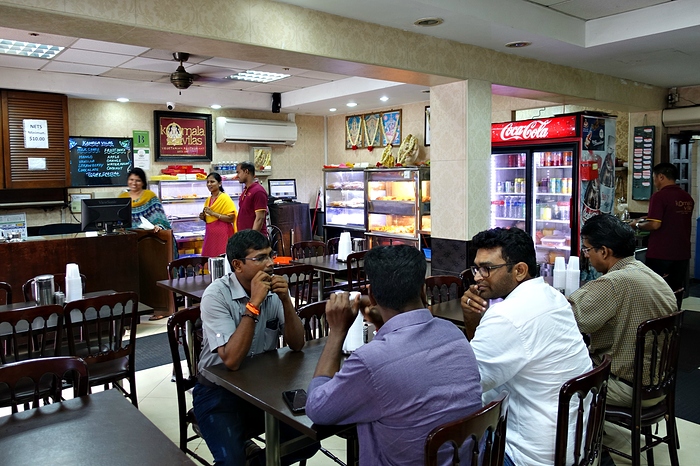 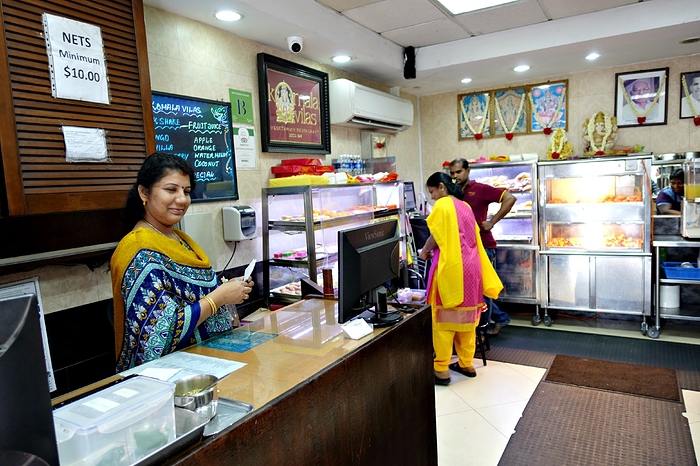 One other South Indian breakfast spot which quickly became my favourite is Madras New Woodlands on Upper Dickson Road, off Serangoon Road. It’s just a couple of minutes’ walk from Komala Vilas, round the corner. I first came across Madras New Woodlands when I was working for the Singapore Broadcasting Corporation back in 1990. Our TV station was 15 minutes’ drive away , but I loved the food at Madras New Woodlands so much, I actually went there for lunch and dinner daily for 14 days straight! 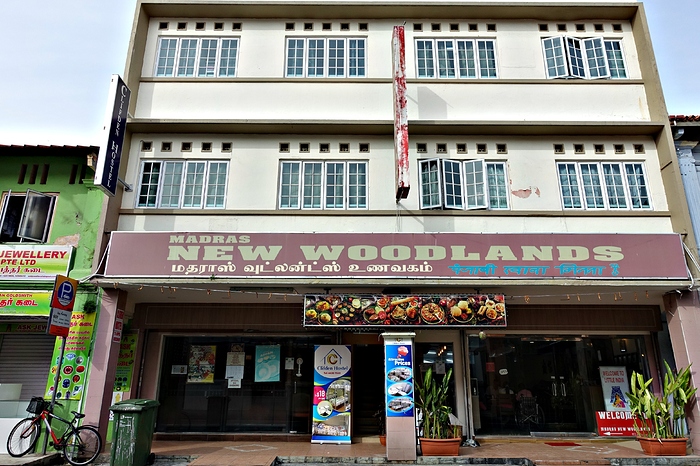 c04c7512ff772b2c659e67df68f063eaa900a60b.JPG3888×2592 2.12 MB
I ordered a Masala Thosai on that same morning last weekend, just for comparison’s sake. Madras New Woodlands’ version had been even better than Komala Vilas’ and, 27 years later, they maintained that edge effortlessly. The one I got was thinner and crispier than Komala Vilas’ rendition: 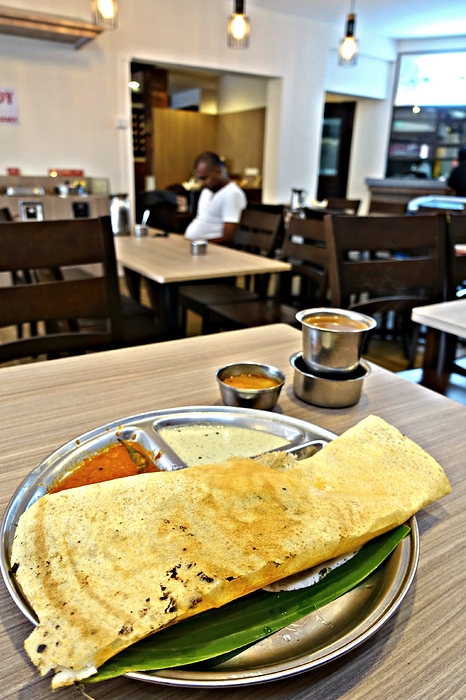 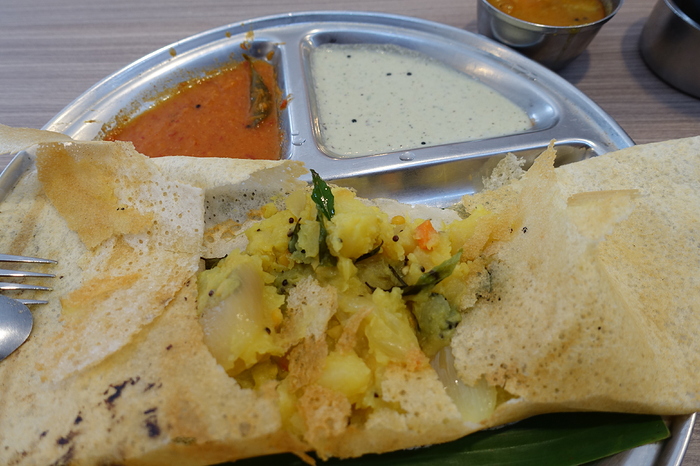 Milk tea was just as good as the one at Komala Vilas - very little to differentiate between the two. 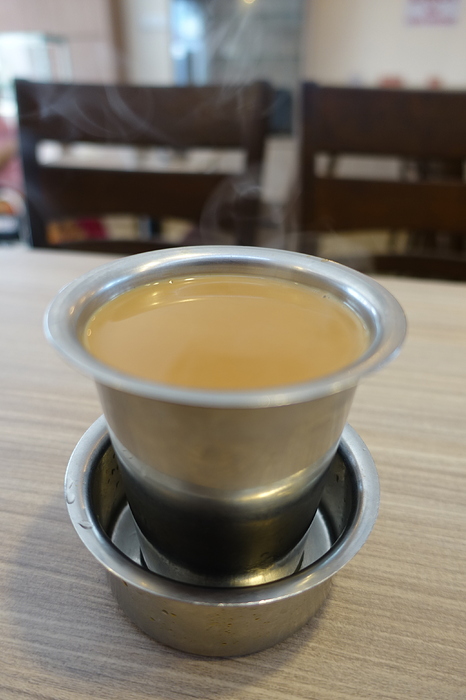 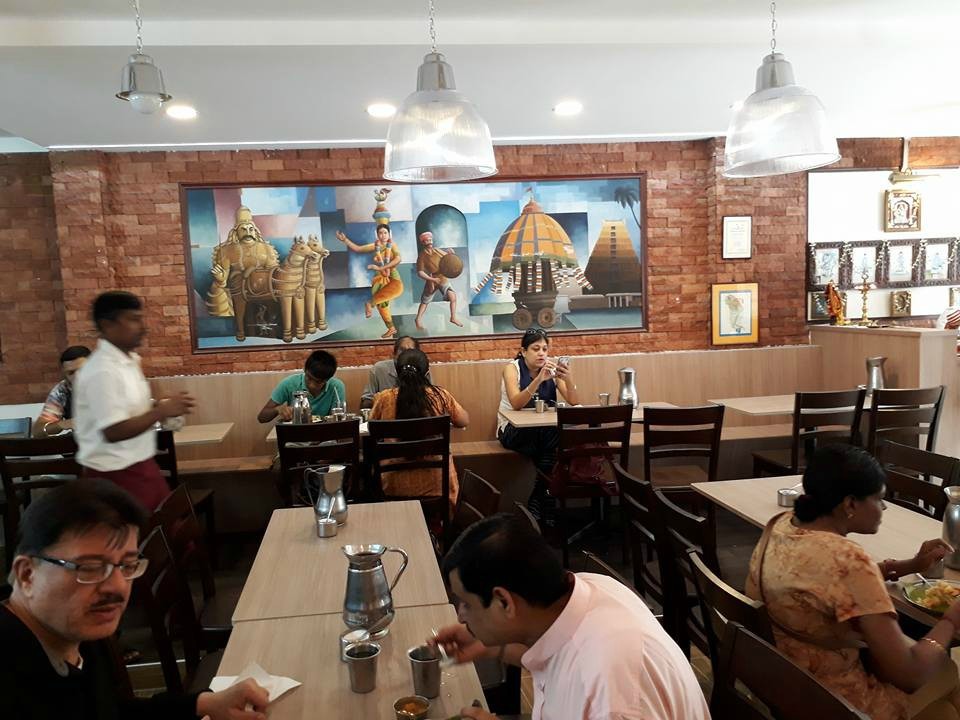 All looks delicious Peter. Certainly better than the sad excuse for a dosa I got at Tiga Ros in Melaka on a recent visit. 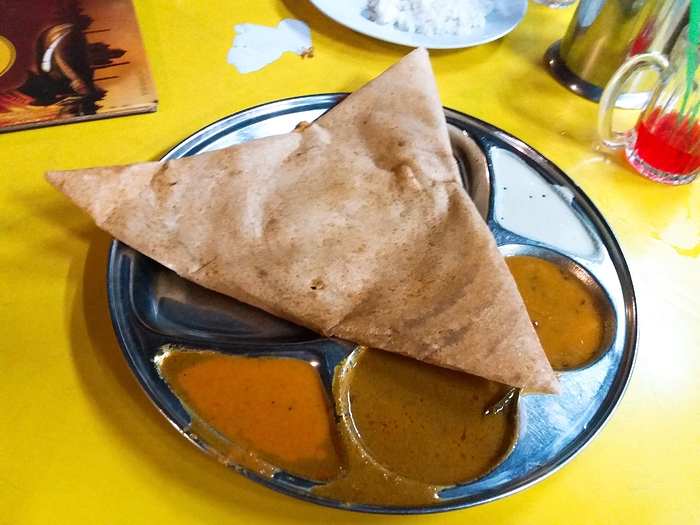 When I visited Singapore a couple of years ago I stayed in little India. Free breakfast at the hotel so I didn’t avail myself of the breakfast options in the area. I did though have a fantastic mutton biryani at Bismillah Biriyani. Is is still going do you know?

I did though have a fantastic mutton biryani at Bismillah Biriyani. Is is still going do you know?

It is still around - but has a knack for over-selling to and over-charging foreigners.

LOL! Yes, I’d been to Murugan Idli Shop on Syed Alwi Road. It’s relatively a “newbie” to Singapore - I’d first had its wonderful idlis at its original outlet in Chennai many years back (https://www.chowhound.com/post/chennai-india-worlds-idlis-murugan-idli-kadai-844957). It only opened in Singapore about 8-9 years ago, but the standards in Singapore somehow could not reach the stratospheric heights of its Chennai counterparts’.
https://www.chowhound.com/post/singapore-murugan-idli-shop-849783

Haha, should have known better… How does Komala and Madras compare to Murugan?

These days, Murugan’s idlis are as good as those from both Komala Vilas and Madras New Woodlands. But I did remember a time when Murugan first opened - its idlis were such a big let-down compared to the wonderfully pillow-soft ones in Chennai. At the time, I’d rather go to Komala Vilas or Madras New Woodlands for my idlis. Of course, there are also other good options in Little India at the time - Sri Kamala Vilas at Tekka Market in the same neighbourhood is another favourite hangout. But Saravaana Bhavan and Sangeetha were pale shadows of their originals in India.

Will check out Komala and Madras next time I’m in Singapore. Thanks for the recs.

I’ve grown up going to Komala Villas whenever I was in Singapore. It’s been a while since I’ve been but I’m glad to hear it’s still as good as I remember! The other restaurant of choice has been Ananda Bhavan. I prefer their vadas over the ones at Komala Villas.

There have been several times we’ve picked up a bag full of vadas the evening before we fly home, frozen them, and brought them back in our suitcase!

Freeze vadas and bring them home overseas? Oh my! The lengths you’re willing to go through!

Freeze vadas and bring them home overseas? Oh my! The lengths you’re willing to go through!

We can get vadas here, but they are no where near as good as the ones from there. We can make them at home, but it’s never quite the same!

The best vadas I ever had were from Murugan’s in Chennai - a good accompaniment to their famous idlis, too.

@boogiebaby, have you tried Madras New Woodlands’ sweet appams? Many years ago - back in 1990, I was having breakfast there when I saw an elderly Indian man eating 4 pieces of appam with a gusto. I didn’t realise that I was staring until he looked up & our eyes met. He smiled and said, “The best appam in Singapore was from another restaurant along Race Course Road. This place has the second-best appams. But the other restaurant has closed down, so I now come here for the best appam I can find.”

Needless to say, I ordered the same - they were simply amazing. I’ve never looked back since. This chef who prepared the appam I had last weekend was the same person who made the first ones I tried at Madras New Woodlands 27 years ago. I asked him how long he’s been working for the restaurant and he said, “More than 40 years now.” He didn’t look a day over 50 - he must have started working when he was a boy!! 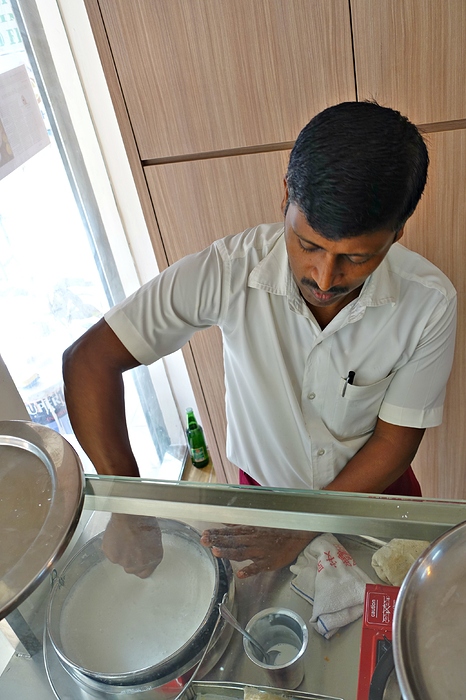 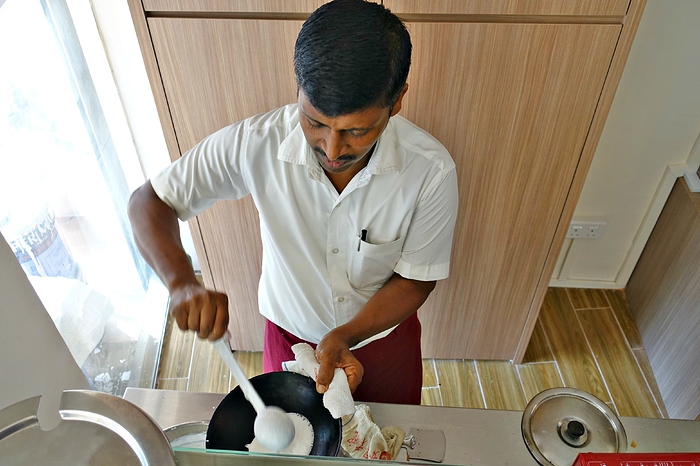 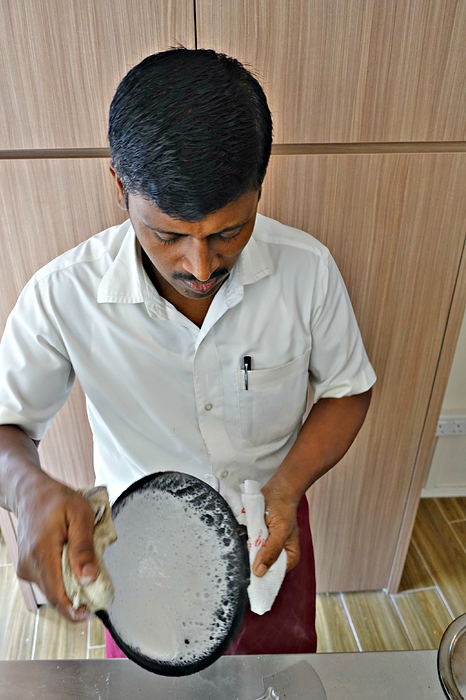 Adding an extra scoop of the flour-coconut milk mixture onto the crepe towards the end of the cooking process so one can have the thick, moist spongey centre. 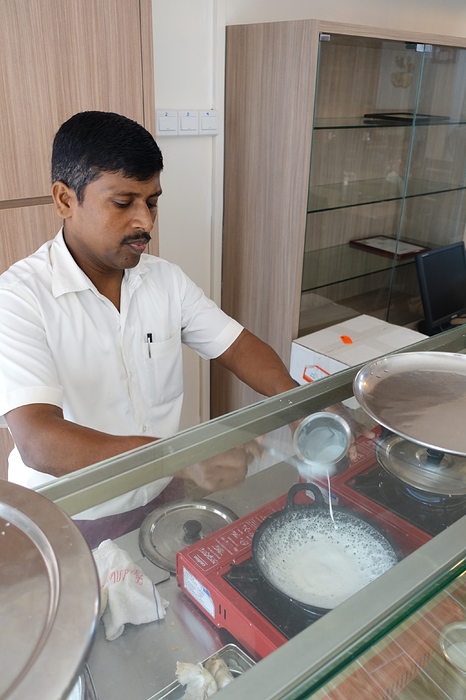 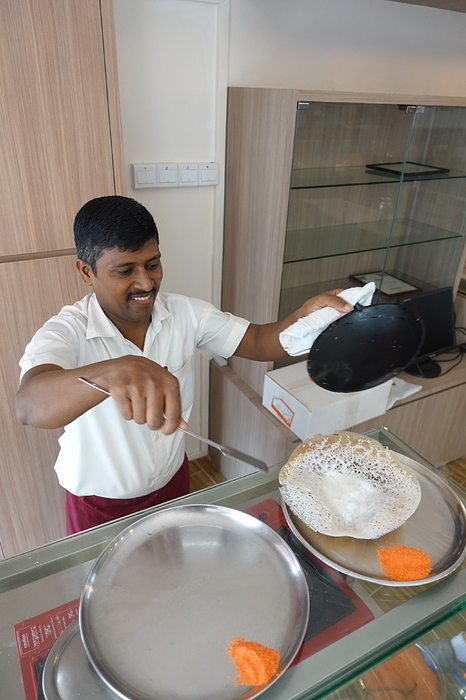 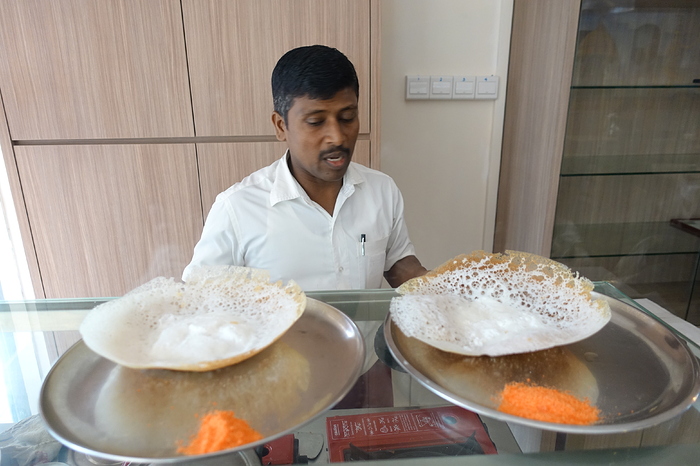 Every bit as scrumptious as I remember it to be 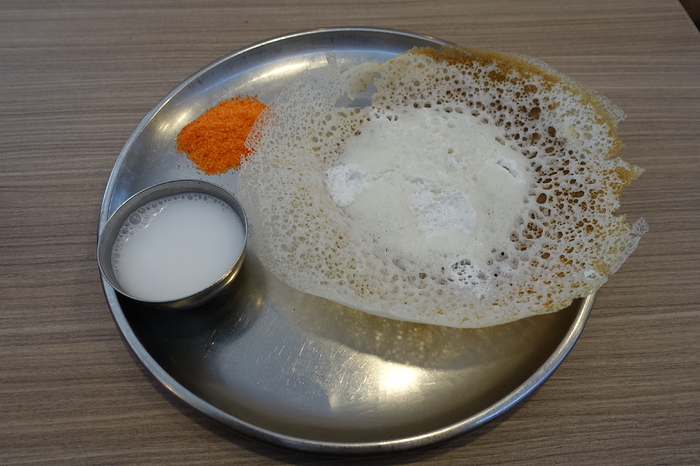 I have not. To be honest, I’m not a big appam fan! I prefer thosai or roti canai for breakfast. I was in KL for 10 days last spring, and I literally ate thosai and roti canai every morning. Can’t get those kinds of breakfast at home!

I may be in Singapore later this year – if I am, I’ll try to get over here to try the appam. Maybe it’ll change my mind about them!

It’s really, really good. For some reason, I simply cannot find this type of appams in Kuala Lumpur, where their Indian appams are about 30%-50% larger than their Singaporean counterparts, but nowhere as tasty. Same recipe, though.

Indian appams in Penang, on the other hand, is a totally different animal altogether! The Penang-Tamils add eggs to the batter besides coconut milk, resulting in utterly decadent, rich, aromatic appams - 30% smaller than their Singapore cousins and half the size of KL’s clunky ones. But the Penang Indian appams are, oh my God, a world unto their own, with an aroma and deliciousness that has to be tasted to be believed. It’s no wonder then that one of Penang’s leading Indian appam vendors was chosen to take part in the Makansutra World Street Food Congress in Singapore two years ago. 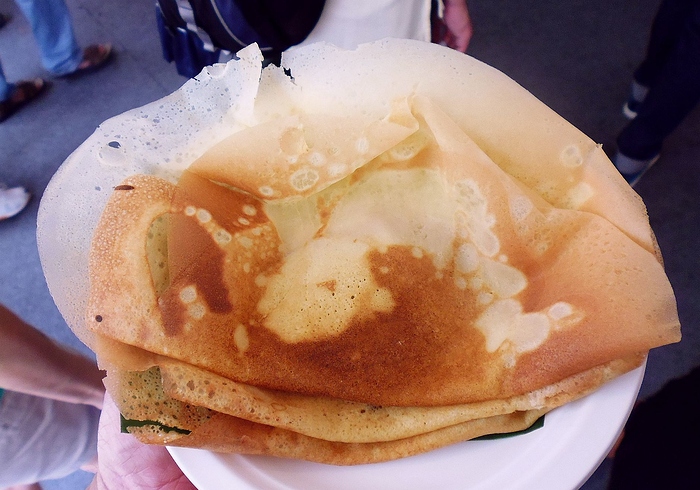 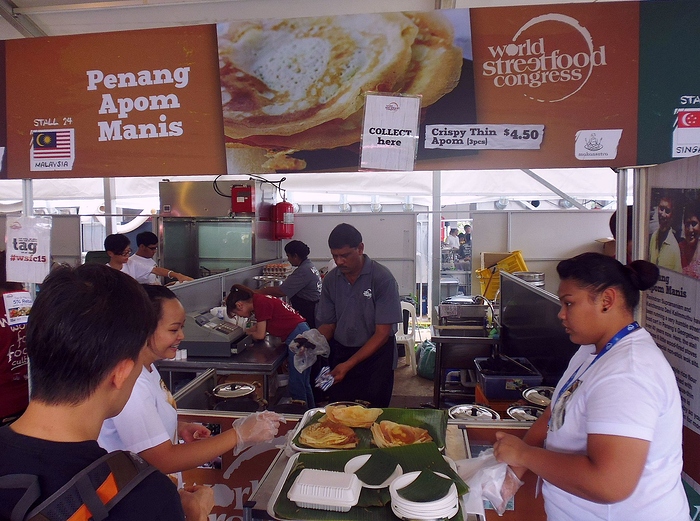 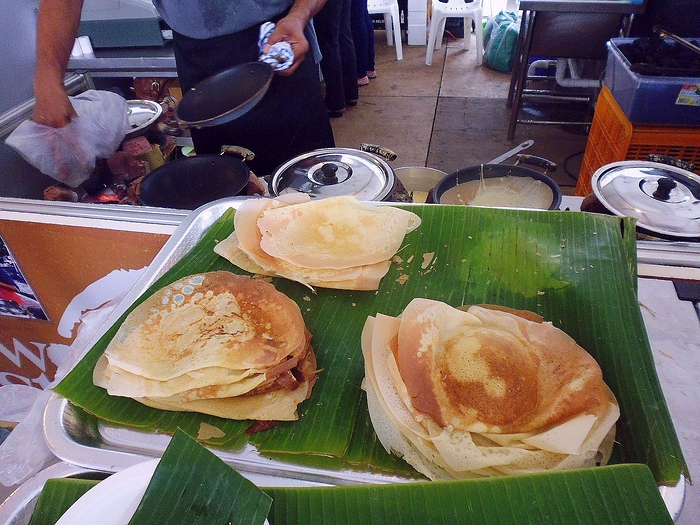 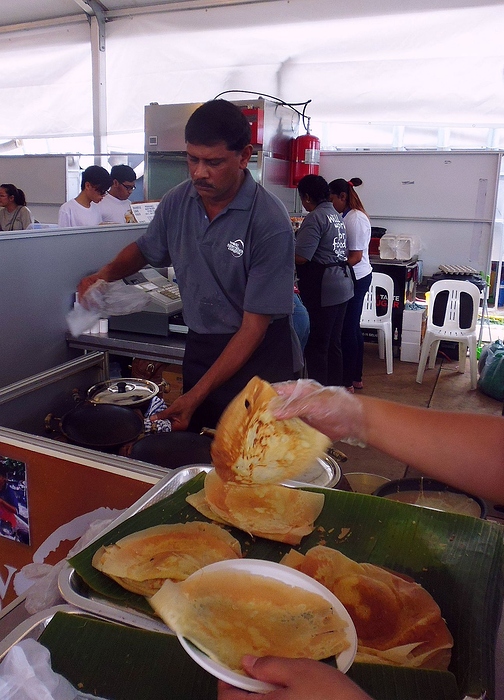 You’d be amused to know that Bay Area now has its own Komala Villas, though its said that its nothing like the original.

I remembered when I first visited Oakland - my local colleagues brought me to quite a few Indian restaurants which they felt was good. But to me, visiting from Singapore, the Americanised “Indian food” looked too robust and oversized, and did not have the subtlety of flavours I come to expect from well-cooked South Indian food.

Staying in Little India in April. Breakfast is included at my hotel but I have stayed there before and they served up one of most mediocre nasi lemaks I’ve eaten anywhere.
Will try Murugan’s Idris. But would appreciate recs for good poor masala and good uttapams. Ta.

A branch of Bangalore’s Mavalli Tiffin Room (MTR) is also worth a visit.

After the amazing gastronomic experience at MTR’s outlet in KL two days ago, I was tempted to try out its Singapore outlet on Easter Sunday. I’d never been to MTR’s second foray into Singapore and which opened in 2012. Somehow, MTR’s short-lived, failed first venture here back in 2007 at Le Meridien Shopping Centre on Orchard Road had been expunged from the record books. I’d remembered it back then as I was smitten by my visit to the original MTR in Lal Bagh, Bangalore just the year before, in 2…

Of course, one cannot talk about South Indian breakfasts in Singapore without mentioning the grand-daddy of them all - Komala Vilas (https://komalavilas.com.sg/public/home) - it has a whole Uthappam section to satisfy your every whim - tomato uthappam, onion uthappam, ghee uthappam, etc.