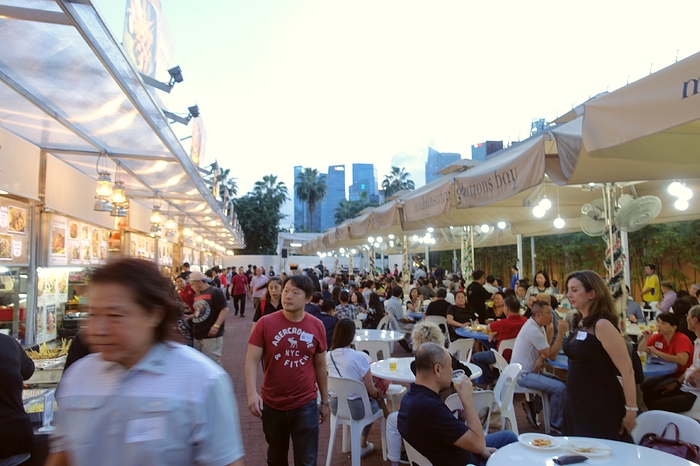 An interesting addition to the clutch of stalls offering some excellent dining choices there: Aussie chef, David Pynt, of 1-Michelin-starrred Burnt Ends, has set up shop offering some interesting concoctions, marrying Aussie-style barbecued meats with Asian flavours. Case in point is his BBQ chicken smothered with salted duck’s eggyolk sauce, and served with garlic rice and pickled cucumbers. 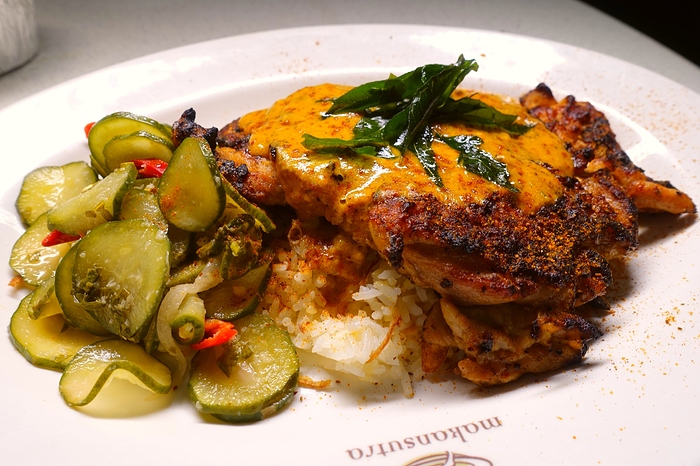 The salted duck’s eggyolk sauce is pretty addictive, and even went well with potato chips. 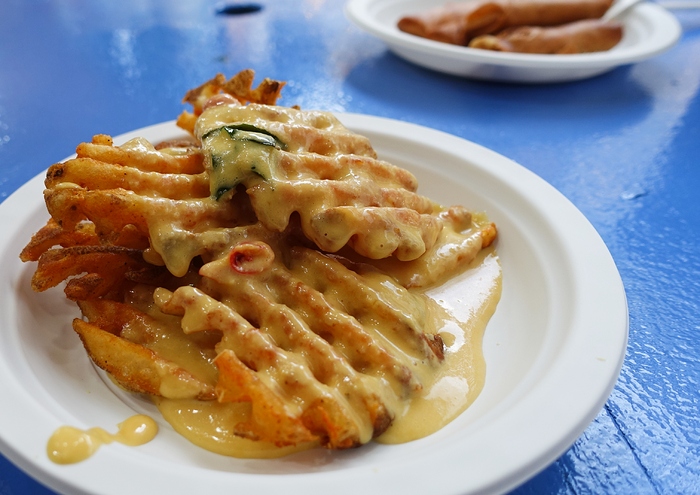 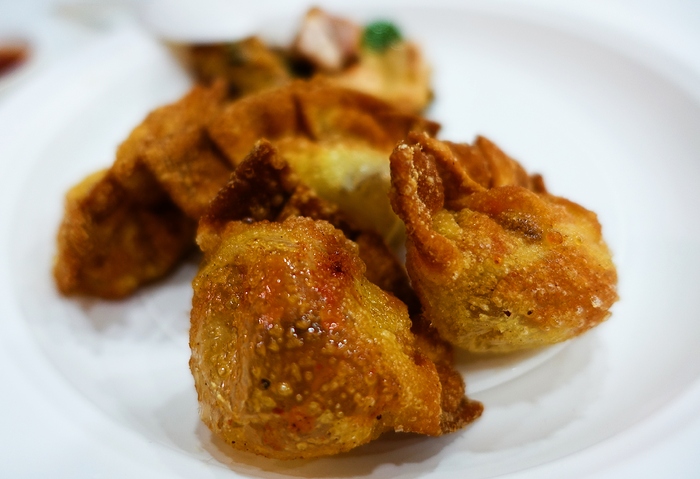 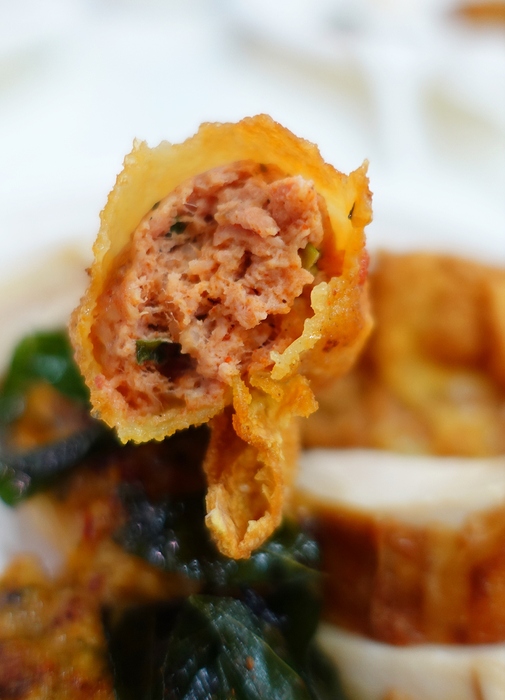 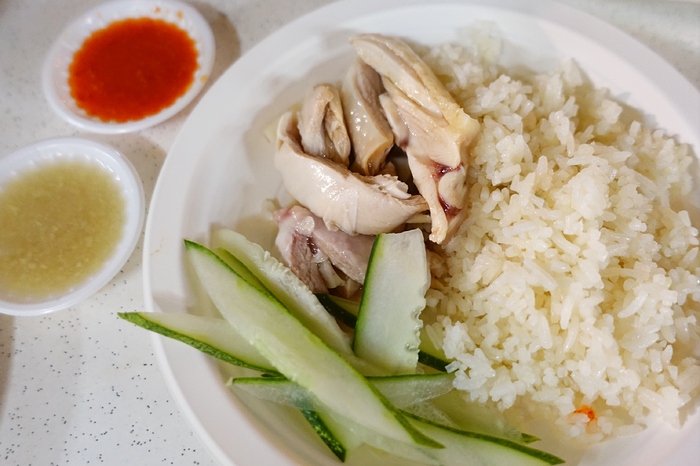 Okay, Singapore does chicken rice better than Malaysia, but Malaysians always, always, do Mamak-style mee goreng better than Singapore. So, this mee goreng from the Old Satay Club stall, although it’s very tasty, still has that red food colouring added, which I could never understand. In Malaysia, the reddish hue comes from the chilis and the tomatoes, never any food dyes. But in Singapore, some mee goreng stalls virtually coloured their fried noodles a fluorescent red with the fake colouring used. 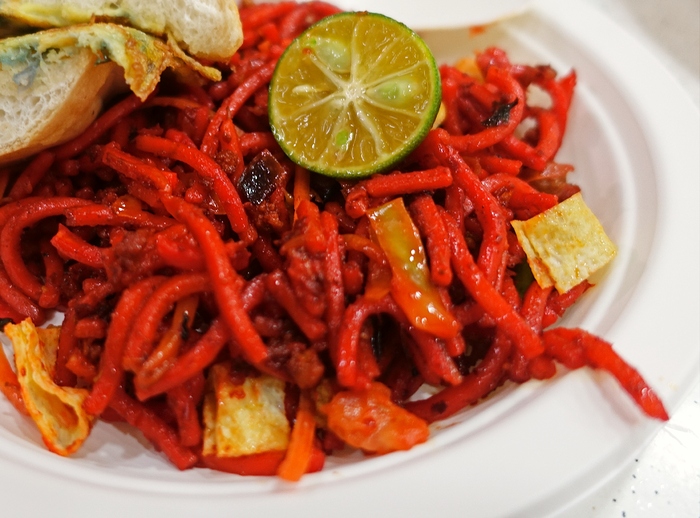 The same stall also offers the mamak oddity - “Roti John”, a pan-fried sandwich utilising a fluted bread roll or “roti” which is like a local version of the French baguette. Local Malays call all white people “John” since the British-colonial days, and “Roti John” was so-called because a baguette-like roll (i.e. white man’s roti) was used to make this very Malay/Indian-Muslim dish. It involved slicing the fluted bread roll lengthwise in half, then frying it face down on a minced mutton or chicken, egg and onion mixture, spiced with chilis & other condiments. Not my cup of tea, but it has its legions of fans in Singapore and Malaysia. 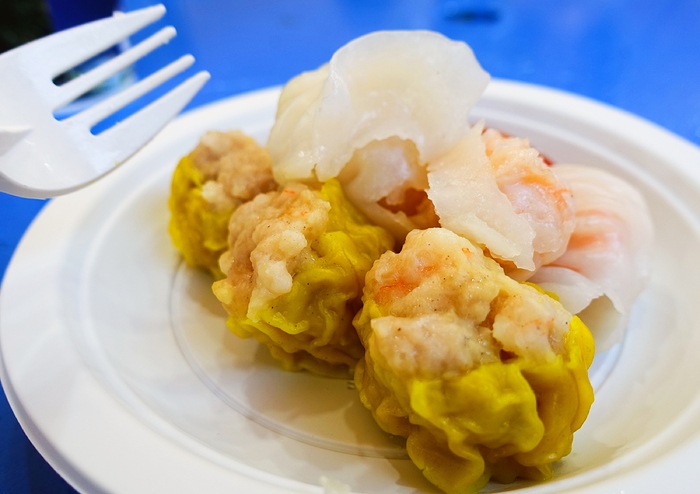 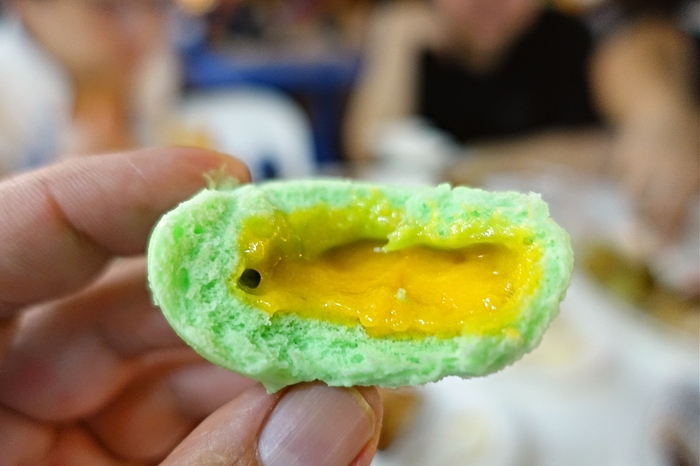 My favourite dish at Gluttons Bay is from Syifa’ Satay stall - tender skewers of chicken, beef or mutton satays, garnished with slivers of raw cucumber and onions, and served with a very rich, spicy peanut sauce. Worth a trip here just for this. 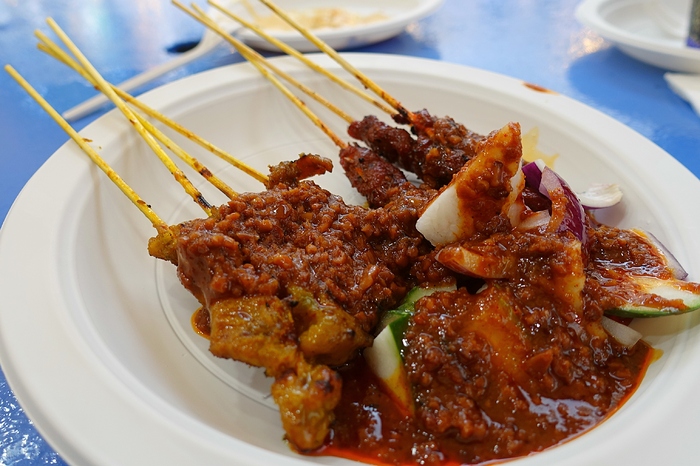 I have a weakness for chye tow kway, or pan-fried carrot cake. The often-used English name itself is a misnomer. Everyone in Singapore and Malaysia know these steamed radish-tapioca flour pudding as “carrot cake” eventhough it’s radish being used (I guess the reason is because radish is known in local Chinese-Hokkien as “white carrot”. I know it’s weird, but in Mandarin where radish is called “luobo”/萝卜, a carrot is known as “hong luobo”/ 红萝卜 or “red radish”.

Anyhoo, steamed cakes of radish pudding are pretty similar to polenta cakes which one slices and pan-fry. Here, “carrot cake” is cut into cubes and pan-fried in lard with chopped salted radish and eggs. It’s a Teochew dish which is handled with slight variations in other South-east Asian countries settled by the Chinese-Teochew diaspora. In Penang & Kuala Lumpur, it’s seasoned with dark soysauce for a darker tinge, and beansprouts are added for an additional textural crunch.

Char koay kak seller, Ng Hooi Gaik, 59, took over the business started by her mother 60 years ago. She operates from around 7.30am on Kimberley Street, near the junction with Cintra Street, and usually finishes around 11am, if not earlier. You can buy her “koay kak” and eat it at Sin Guat Keong coffeeshop nearby. [image] Lard is an indispensable ingredient when frying this dish. Mdm Ng still sticks to the old cooking traditions and only uses charcoal or firewood for cooking. [image] Mdm Ng…

The stall at Gluttons Bay is known as Huat Huat, and it offers the two types of fried “chye tow kway” which is common in Singapore: the usual “white” type, and the “black” type which has sweet-dark soysauce added. One can also order a half-and-half, where both types will be piled onto one plate, which was what we did. One complaint I have regarding Singapore-style fried radish cake is that the cakes are chopped too finely during the frying process, whereas I prefer to chew on larger pieces of the pudding. It’s topped with chopped scallions and served with a dollop of spicy chili paste. 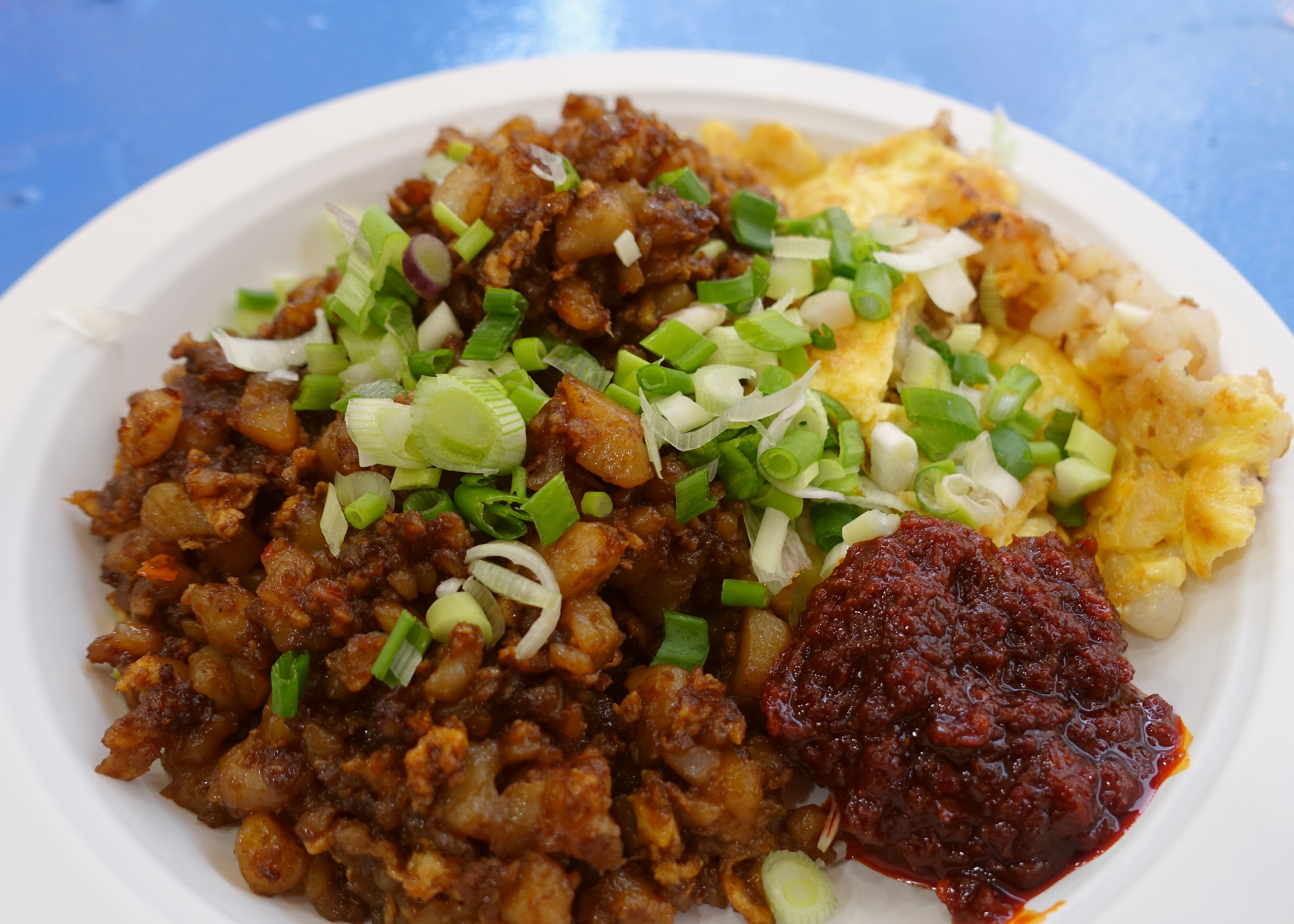 Too many things to try on one trip to Makansutra Gluttons’ Bay. We need to go back next time to try more, like these amazing-looking tandoori-baked meats here. 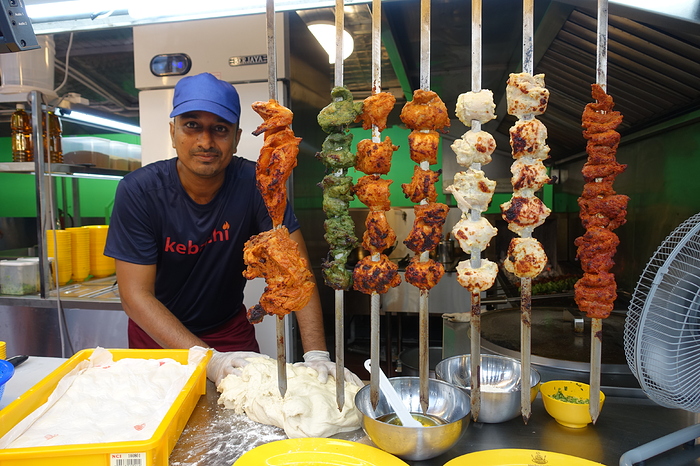 Char kway teow - it’s not Singapore-style, but a Singaporean take on Penang-style char koay teow - somehow, one look at you just know it cannot be Penangite: the Singaporean kway teow noodles used are too thick compared to Penang’s softer-textured koay teow. I didn’t manage to try this - the folks at the next table had it. 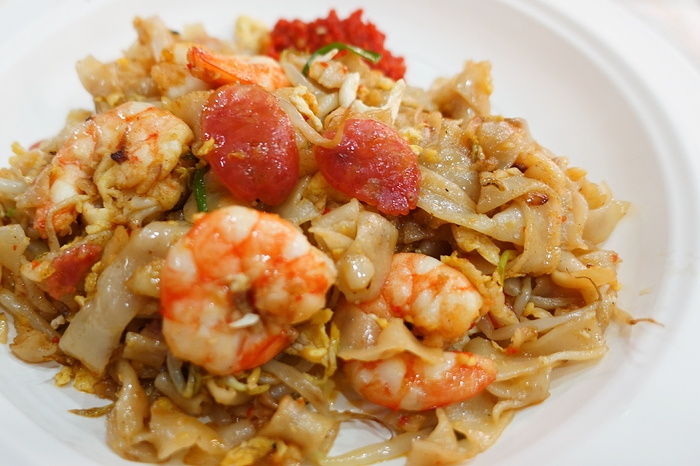 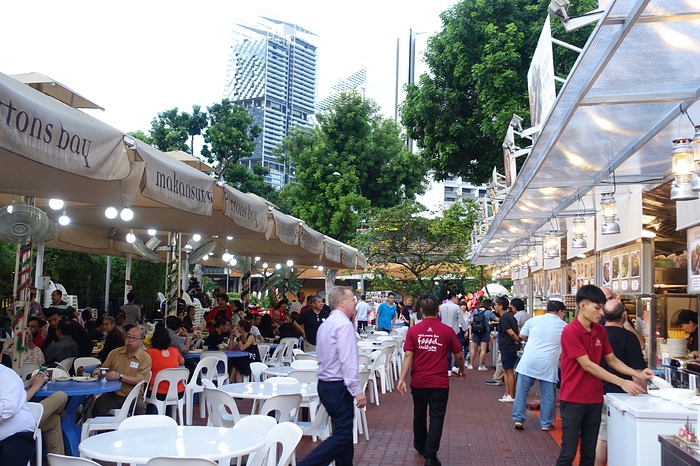 Ya killing me here

Ya killing me here