Have to say the recipes are mostly simple but delicious, not astonishing, but good for a quick meal especially most of the time, when you have certain ingredients, you can always find a recipe that you can cook! I was initially thinking of cooking just a few dishes.

I would like to cook some noodles and desserts as well, but no time to shop fresh noodles, glutinous rice, nor green papayas or mangoes, so some dishes have to wait.

May 2022 Cookbook of the Month - Announcement Cooking, Cookbooks, Ingredients

The voting was very close, with just one vote making the difference. THE NEW MIDWESTERN TABLE by Amy Thielen will be our May Cookbook of the Month. Use this thread for general discussion as you prepare to cook from the book. I will post a reporting thread on May 1. If you are new to COTM, and want to see how we arrived at our selection, you can visit our nomination thread and our voting thread.

Tonight I made the PORK SATAY with the CUCUMBER RELISH and EASY PEANUT SAUCE, and, like Mel, I served it with rice to make it a meal (though I didn’t serve with toast - next time!). I’m going to report all the recipes together here for simplicity’s sake. Mel has already described the satay above - I will say that I really enjoyed this version of satay and didn’t much miss the lemongrass, etc. The flavors worked really well with the pork shoulder and it all ended up being delicious and tender. (I was worried it wouldn’t be, because I didn’t cut my strips quite as thin as she prescribed. Didn’t end up being a problem!) I used orange juice rather than pineapple, but otherwise followed the recipe exactly, broiling the meat to cook.

I also made the cucumber relish, though I couldn’t follow the book’s recipe exactly (I didn’t scan it years back when I took it out of the library, apparently…) I kind of used the website version plus what I could gather from Rainy’s report. I basically made a 1-1 sugar vinegar syrup, with 1/4 parts water and some salt added, then poured it over 2 thinly sliced English cucumbers, some shallot, a little jalapeno, and lots of cilantro. You are supposed to serve immediately, but I let it sit about an hour to meld as I usually do for cucumber salads. (I tend to like my salads a bit more tart than this, but it turned out well and my cousins couldn’t get enough!)

Finally, the absolute best part of the meal in my opinion was the peanut sauce. I made the easy version, using a store brand smooth natural peanut butter and choo chee curry paste (I thought I had red, but didn’t - it worked great!). Otherwise I followed the recipe exactly, using the lower amount of sugar. (I can’t imagine more - it’s just on the edge of too sweet as is!) The outcome was delicious and SO easy - as my mom would say, shoe leather would taste good with that sauce. Will definitely keep it in my arsenal, though now I want to try the “not so easy” version to compare. All in all, this was a very successful Sunday dinner and I will copy it down for the future for sure! 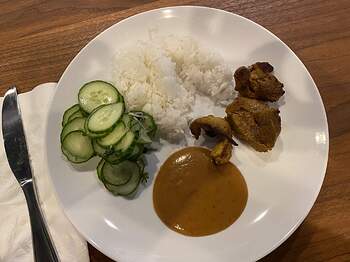 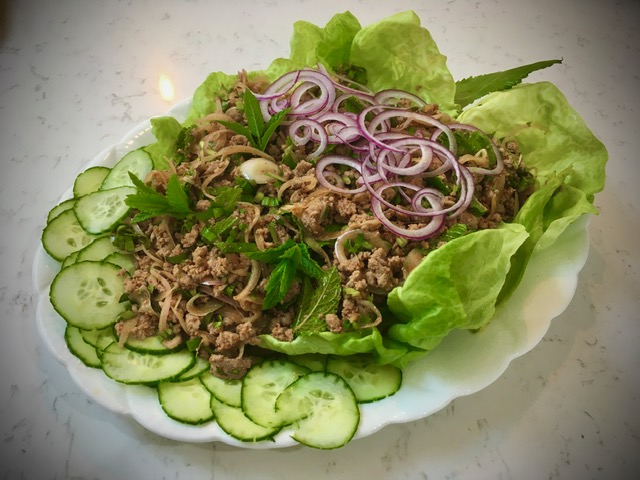 NORTHEASTERN MINCED CHICKEN (TURKEY) SALAD
I followed the method for the larb gai as described by riley. I used a pound of ground turkey, and scaled up accordingly. Made chile powder using generic dried red chiles, which resemble chile de arbol. Added additional lime juice and fish sauce, also soy sauce and a bit of palm sugar, to balance. I was glad to find fresh culantro and toasted rice powder at the Asian market. I served it with jasmine rice, cucumbers, red onion slices, and butter lettuce instead of cabbage. Made a satisfying Sunday lunch for two, with a little left over. 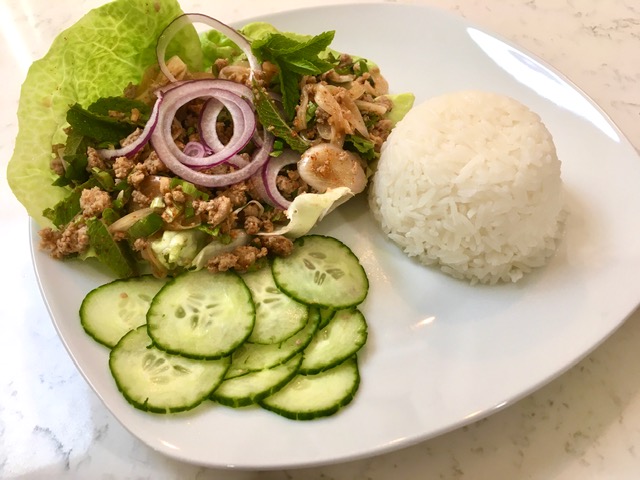 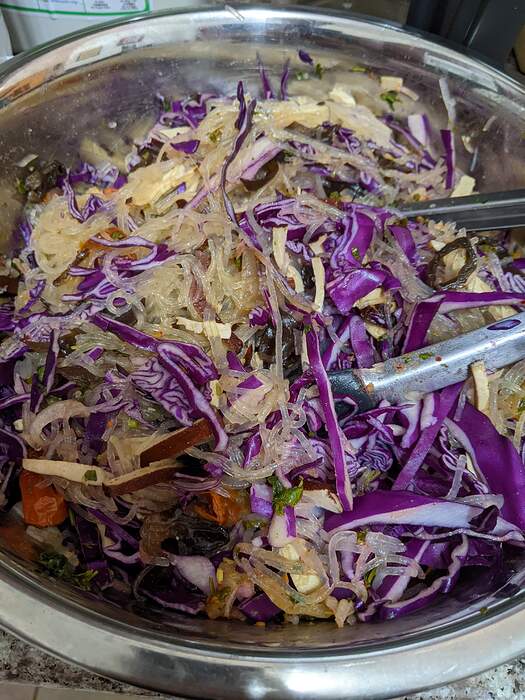 GINGER CHICKEN
Also made this meatless, subbing in “chewy vegetarian tofu” that contained tapioca flour, a neat thing. This dish reminded me of what I’ve eaten in restaurants and wasn’t too hard – can recommend, and I think it’d be even better with chicken. 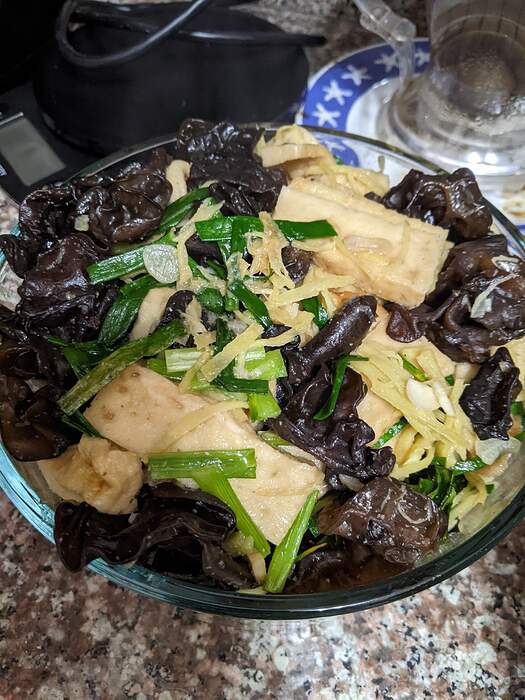 Very easy to make, and the family loved it. I thought it was good, but they were going crazy for it. Heat wok or skillet, add oil, then add sliced onions (yellow, white or red). Once these start to soften add cut up chicken, chile jam, oyster sauce, and fish sauce. Cook until done. I served over jasmine rice with some roasted butternut squash on the side. It’s not an pretty dish (lots of brown - I was glad I used red onions).

I like this book. If I saw a cheap used copy I’d probably go for it, but that’s about where it ends for me.

THE NEW MIDWESTERN TABLE - May 2022 Cookbook of the Month Cooking, Cookbooks, Ingredients

Welcome to our May reporting thread! Our book this month is The New Midwestern Table, by Amy Thielen. To report on a recipe, please put the name of the recipe in ALL CAPS. Include the page number if you have the hard copy of the book. If you are cooking from an ebook you may omit the page. If you are the first to report on a recipe, post as a reply to this topic. If someone else has already reported on the recipe, post as a reply to that person’s post. To respect the author’s copyright, plea…

I differed from the recipe by allowing the sauce to cook down until it became more creamy and substantial. I thought the recommended cooking times didn’t allow the sauce to meld properly. I was correct. At the time the cookbook suggested, the sauce was thin and not as flavorful as I wished. I could taste the different ingredients in the sauce. The sweetness from the palm sugar and the fish sauce were super distinct. By cooking the sauce longer and making it less watery, all of the flavors combined to create something better than the parts alone. The fish sauce cooked out as did the sugar and the chilis which get added.

I really liked this and think it would be great served o ver jasmine rice cooked in coconut oil or milk. 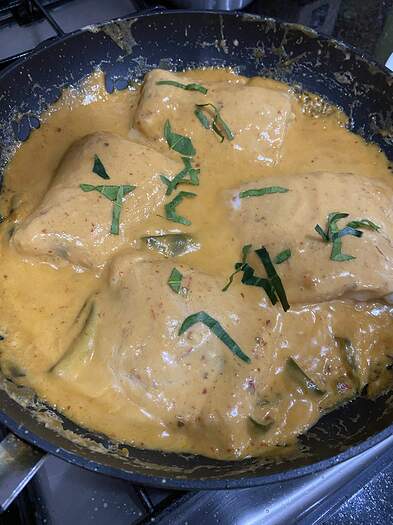 I played a bit fast and loose with this, but I think that doesn’t make a big difference. This was a huge hit. L and I aren’t big red meat eaters, and she remarked that this was the most she’d enjoyed eating steak ever. The steak is marinated in thin soy sauce, veg oil, and white pepper for a few hours. Cucumbers, tomatoes, and red onions or shallots are cut. A dressing of lime juice, fish sauce, sugar (I used brown), and chili powder is made - there is no oil in this dressing. I guess she feels the fat from the steak will make up the difference, and it was fine but I think next time I’ll add a little oil. I used lots more veg than called for (I used 4 tomatoes, 1 full English cucumber, and a quarter very thinly sliced red onion, and added a bag of salad greens - tossed them all together with the dressing, then put the sliced, cooked meat on top. For such a simple marinade, this is absolutely delicious. I used 2 rib eye steaks, and so much more veg, so I doubled the dressing. Simple and healthy and quick - what could be better?

I love this dish and find that it’s even better with some toasted rice powder.

This is one I’ve wanted to try if I can ever manage to get my propane bottle refilled. Glad to hear you liked it.

RainyRamone described the cooking technique quite thoroughly and I won’t repeat it here. I will just note that I added in green beans as Kenji suggested in his new Wok cookbook. I also added yellow bell peppers as my favorite local Thai joint includes them in their Kra Pow and I love it. I also added in shrimp because I think shrimp and pork go really well together. Like peas and carrots, y’all. And I used ground pork in this recipe and not the chicken mince called for.

Loved it and would make it again. 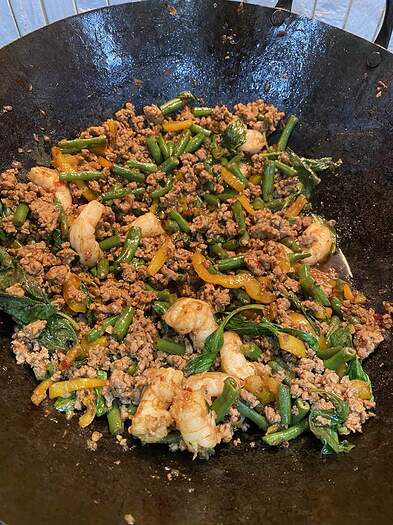 I was excited about this book, but being away from my own kitchen all of April precluded me from cooking along. So I’ll cook along a bite belatedly.

I had this recipe in mind when I made one of first meals back (white-cooked chicken).

To that light but flavorful broth, I applied this recipe, adding galangal and lemongrass to make it even more aromatic. I also added some scallions and cilantro stems.

Though she says not to strain it, biting into galangal isn’t my favorite thing, so I strained out the broth before adding chicken, oyster mushrooms, the rest of the seasoning, and some cilantro to finish.

Just a lovely soup, whether to start or as a meal (which is how I had it). Tastes exactly like the restaurant version. 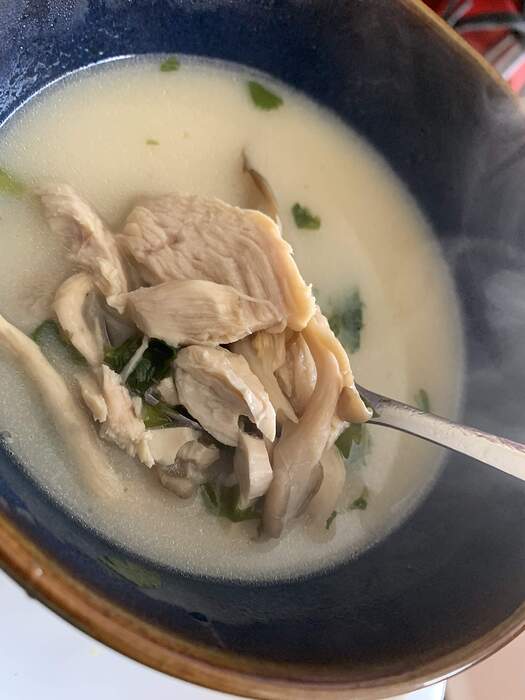 I made this last night. I’ve probably made it a dozen times since I got the book when it was published. Last night I used chicken thighs, cut into bite-size pieces and cooked them with the coconut cream and store-bought red curry paste, and a sliced onion, before adding the pineapple and cherry tomatoes. Finished with fish sauce and Thai basil. Made excellent leftovers for lunch today.

Welcome to voting for June 2022 COTM. Of the varied nominations, two emerged ahead of the pack, and we’ll choose between them: EDWARD LEE MONTH, including his books Smoke and Pickles and Buttermilk Graffiti, and BOTTOM OF THE POT: PERSIAN RECIPES AND STORIES by Naz Deravian. Below the book links at the end of this post, you’ll find a link to their indexes at Eat Your Books, showing the name and main ingredients of all its recipes, to give you a sense of the book. To vote, use the fork-and-knife…

I used some pork neck I bought from a Japanese market. Broiled rather than grilled. Simple to make and tasty, the most involved part was probably making the toasted rice powder for the salty and sour dipping sauce, which was very good.

Made LAP KAI (pg. 75 in Kindle ed.) for dinner tonight. Very easy to make, especially since I just used the leftover sauce from the kho mu yang from earlier this week as the dressing as the ingredients were pretty much the same. To which I added chopped cilantro and mint, and more toasted rice powder. Minced up a chicken thigh for the ground chicken.

I don’t think I’ve ever seen pork neck at the store, but then I haven’t looked for it!

Yeah I hadn’t seen it either, just saw it at Nijiya of all places (Japanese supermarket chain in the US). It had been sitting in my freezer for awhile.