went to the new-ish Uyghur spot in East Cambridge for lunch yesterday. Earlier reports described it as rough around the edges, and service wise I’d say that’s still a bit the same. The main guy was nice enough, just a little slow on some things and spending a lot of time in the kitchen. But it’s clean and bright in there, and all of the tables were full. The limited menu didn’t offer a lot for my non-spicy non-pork/lamb/beef eating s.o., but she was game enough to come along and I picked up the tab.

Items tried: housemade yogurt, a nice little starter. yogurt was good, honey was storebought, standard fruit and nuts. Interesting to start off with the sweet. 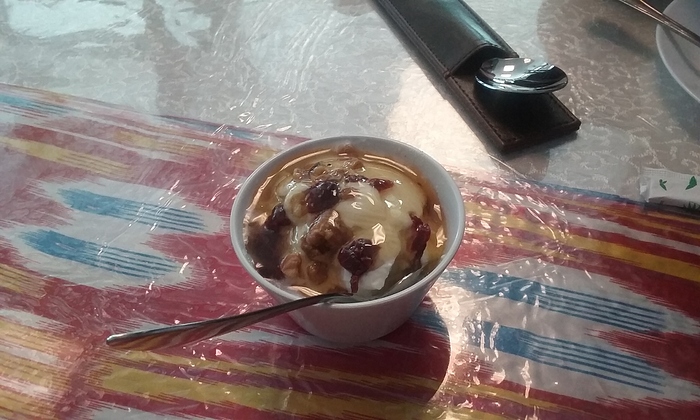 Samsa: this was probably my favorite thing. Flaky pastry, ground lamb inside, not overly flavorful but I’d sure eat this for breakfast with coffee in January. Really good. 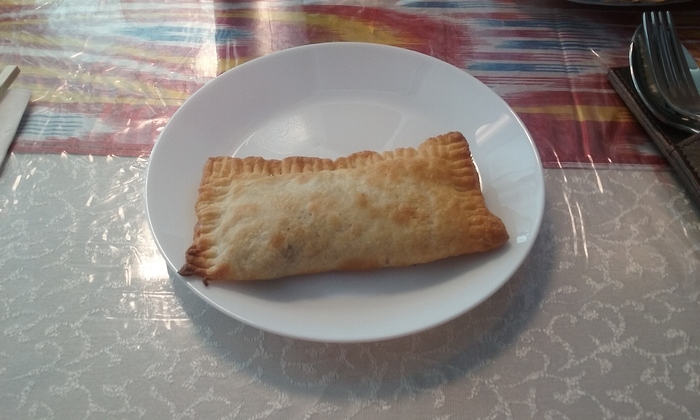 Pumpkin manto: liked the vegetable filling of these, the meat inside though seemed a little ill-distributed and out of place. Dumpling skins were a little thick though cooked fine. I really think these might be better as a vegetarian offering. Not bad, though. 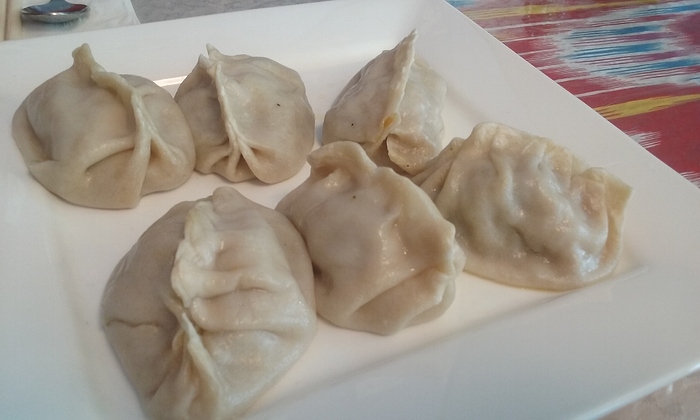 Dry fried noodles: this picture is lousy but the dish isn’t–this was definitely the best thing after the samsa. Noodles were great with a very bouncy, al dente charm and some good flavor underneath the scallion and other vegetables. Meat was a little chewy but worked in nice and the dish had some low level spice that worked well. I at the leftovers for breakfast this morning, and they were fantastic. 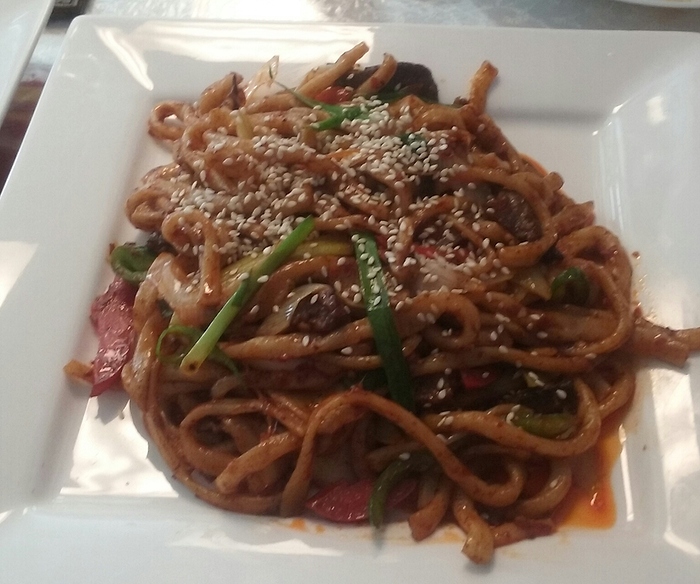 All in all a nice little addition to Boston, especially as it represents an otherwise un-represented cuisine here. I think their limited menu is a smart approach, though it does minimize options for people like my s.o.–there really wasn’t a lot for her to order there, unfortunately. But restaurants can’t be all things to all people, so that’s OK and otherwise I think this is a worthwhile place to visit and I hope they’re successful in this location.

We’ve had the dry fried noodles several times now, and I agree that they are excellent. Your samsa looks better than the one I had on one previous try. Their Big Plate Chicken (known in a couple of NYC places as Big Tray Chicken, and at Home Taste in Watertown as Xinjiang Saute Spicy Chicken ) is always pretty good. The chicken chunks at Silk Road are bigger and meatier than at Home Taste.

this looks awesome! can they do the dumplings, etc. vegetarian? or the noodles? i eat chicken and fish but don’t eat pork/beef/lamb. had some awesome uyghur food when i lived in NE china though (there was a uyghur population in the city I lived in). big plate chicken sounds good.

Their service can be spotty at many different levels, although they are very sweet. A pickup order was not ready at (or even close to) the time they originally gave us, and when the order was finally ready they somehow neglected to hand it to us till we asked. Delivery a few days ago was even worse: we were given a time of 7:18. At 7:35 I called to ask what the status was. “Great” they said brightly, “The food has been ready for some time, and we are just waiting for the delivery guy to get here so that we can get it to you.” I canceled the order.

can they do the dumplings, etc. vegetarian?

we foolishly forgot to ask about this for the pumpkin dumplings but it seems like it’d be pretty easy for them to leave meat out of those (and like I said, I think they’d be better like that). I think the noodles might miss the meat more, but there too it wouldn’t be hard for the kitchen to do. It’s probably worth an ask, though as fooddabbler points out I think service is not their strong point.