A Chowhound report on the revamped Hunan Bar and Restaurant alerted me that Sichuan food has hit Davis, CA. Hunan Bar used to be horrible, so I was glad to hear that @geo12the found their new menu on par with the best Sichuan in the Bay Area.

I mentioned Hunan to a friend in Davis, and she told me that a lot has changed in Davis in the past year. There are several new Chinese places with regional specialties, some of which replaced Chinese American restaurants.

Has anyone else tried any of these new restaurants? How do you find they compare to the major players in the Bay Area and elsewhere? And how is the quality these days at 10+ year old Shanghai Town and Taiwanese Hometown Chinese Restaurant, Dumpling House, and Davis Noodle City?

I recently went back again to Hunan Bar and restaurant in Davis and it was again excellent. BUT, you need to ask for the special Sichuan menu and make it clear to the server that you like spicy food.

Haven’t been to Hometown Chinese Restaurant in a while but used to be my goto for Chinese in Davis. Dumpling house and Davis Noodle City missed the mark for me but I haven’t been to them in a couple of years now.

If Chengdu Style is indeed a relative of the San Gabriel Chengdu Taste restaurant, and their expansion places, this is extraordinary news. Chengdu Taste in LA is one of the 3 superb extremely authentic Sichuan places in the Valley (along with Szechuan Impression and the lesser known divey Lucky Noodle King). I have long been complaining that nothing around here even approaches these places in quality.

It was hard to see from the Yelp and Facebook pictures, but the items (definitely the famous Toothpick Lamb) sure looked like the Southern California places.

There is another restaurant of the same name (Chengdu Style) in Berkeley. Is this related? Their menu and pictures look even more like the SGV places. In particular they show both a cold and hot chopped rabbit dish. Both Szechuan Impression and Chengdu Taste have chopped rabbit dishes that, as Michelin would say, are worth the journey.

How long has Chengdu Style been open in Berkeley?

I wonder how many Davis Chinese owners got their start in the Bay Area. I know that Shanghai Town, which was my goto spot when I lived in Davis, was owned by someone who had owned a place on the peninsula.

Glad to get confirmation that Davis is an exemplar of the trend of the past five years of authentic Chinese food, particularly Sichuan style, showing up in college towns. I remember going to Davis in the 1990s and having to settle for some noodle soup at a place called Noodle Express. 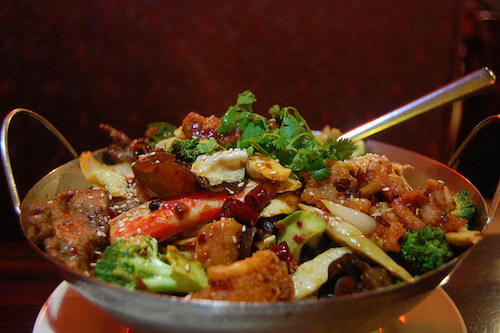 You can find authentic Chinese food in a city without a Chinese community, if that city houses a university with a sufficiently large population of Chinese students.

Noodle Express had lots of bad stuff, but it’s where I first tasted what I later came to know as zha jiang mian!

I remember Noodle express from grad school many years ago. Used to go once a week with friends for the pot stickers.

The original team was the Tacolicous crew and Brandon Jew. Jew dropped out and now owns Mister Jiu’s. I don’t know where the following chefs are: Ron Pei who joined during a revamp that focused more on traditional dishes, or Chef Leo Gan, who lead the XLB efforts.

I believe everyone there (except me and my cousin) seemed Asian, and probably Chinese! I waited to see what menus we’d get (I heard there were two languages) and we got one with both!

Of course, I got the toothpick lamb. Lots of chilies, spicy and tasty, but also what I might call “rich”, and daunting lunchtime fare.

My husband asked me to get him some shrimp fried rice and sichuan chicken to go, and the waitress looked at me strangely. I got him some authentic General Tso! (ha ha).

Wow. I-shanghai Delight just opened a branch in old sacramento. Their Fremont location is small but quite good.

Also, South Gate plaza, next to Ranch 99 on Florin Road, is a Little Sheep Mongolian Hotpot and a place called Shanghai Cuisine

Mmm Davis Noodle City’s still there last time I walked around. Ate their beef noodle soup, but boy, the portions have gotten much smaller.

There’s a new Cantonese restaurant where the old Silver Dragon use to be (Think its called Tasty Kitchen) and had a fair amount of asian students in it. Looked pretty decent.

A weird item I’ve seen across from one of the Regal theaters (G street I think) is a place that serves alcoholic boba drinks.

I’ve seen two or three hot pot places pop up, one of them replacing Hometown Chinese (a Taiwanese place where I really liked their beef noodle soup oddly)

Thanks for the tip on Shanghai Cuisine. We may have to make a trip to visit our friends up in Davis, the restaurant apparently has the Shanghai chow mein that is almost impossible to find in the EBay! I’m salivating over the Yelp photo of that dish right now, LOL.

FYI re Toothpick Lamb: We stopped in one of the Berkeley restaurants in late 2016 and they had this on special. We weren’t overly impressed with most of the dishes, but the Lamb was very good. Small pieces. My review notes say, “A touch of ground toasted cumin with sweet brown bean sauce seasoned the lamb, along with a dry stir-fry mixture of a hefty dose of chiles, garlic, green onion, cilantro, and toasted sesame seed. No gravy on this dish.”

Restaurant was Sichuan Style, 1699 Solano Ave., Berkeley. The specials were listed only on the board out front on the sidewalk, no menu handout.

I tried the one by the Davis Food Coop. I thought it was just ok but not good enough to go back

The place that replaced Hometown is Uniboil. I’ve been there a few times with friends and liked it quite a bit. Here is a review I wrote in October of last year:

"I recently had lunch with friends at Uniboil, a newly opened restaurant in Davis. It opened up in at Mansion square in the space formerly inhabited by Hometown Chinese. This is a chain that specializes in spicy hot pot noodle soups with the branches in Hong Kong and Southern California. Here is what we ate:

Satay beef noodle. This was very good, broth was very rich and flavorful.

Tomato pork udon. This was very different than anything other Chinese noodle soup have ever tried. The tomato flavor was very prominent and the soup was slightly spicy. It was a very satisfying combination.

Sichuan pepper pork feet noodle. I was expecting the pork feet would be sliced but they were actually whole stewed trotters. This was my favorite of the dishes we got. A spicy numbing flavor filled broth with tasty trotters.

my only sustenance for midterms…

My comment is probably outdated, the choices in Davis have definitely gotten better in recent years.

Haha that’s true. Not related to the Chinese theme thread, but Halal Guys are actually opening up where Habit Burger use to be (Next to Pluto’s/Mikuni’s and what use to be Borders/Whole Foods).